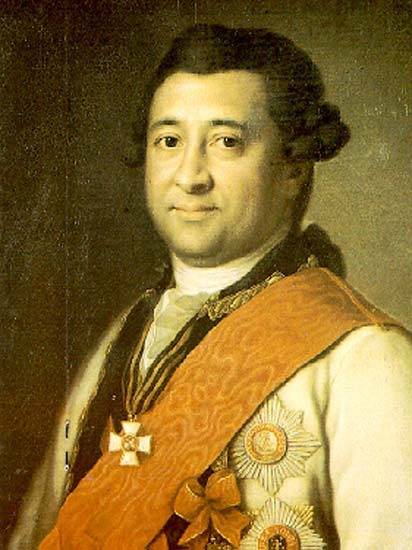 280 back, 5 June 1737, was born Ivan Abramovich Gannibal. The Russian commander was the eldest son of "Arap Peter the Great" and the great great uncle of the great poet A.S. Pushkin. Ivan Hannibal became famous for the successful assault of Navarin, and the founding of the city of Kherson.


Ivan Abramovich Hannibal was born on May 25 (June 5) 1737 of the year (according to other sources, in 1736 or 1735) in the estate of Karjaküla, near Revel (now Tallinn) in Estland. He was the eldest 11 children of Abram Petrovich Hannibal and Christina Regina von Sheberg. Abram Petrovich by origin was the son of an African leader (possibly from Ethiopia), who was captured and sold into slavery. In 1704, the Russian ambassador Savva Raguzinsky brought him to Moscow, where he was baptized a year later. Since the godfather was Tsar Peter I, in Orthodoxy Ibrahim received the patronymic Petrovich. "Arap Peter the Great" was constantly around the king, slept in his room, accompanied in all the campaigns, Peter gradually began to entrust various important matters. In France, he received an engineering education. He chose to wear the surname Hannibal from the end of the 1720-s, in honor of the famous ancient Carthaginian commander Hannibal. Abram Petrovich stuck to the party dissatisfied with the elevation of Alexander Menshikov, for which he was sent into exile. In 1730-s - again in the service. Hannibal went up the hill with the accession of Elizabeth and rose to the rank of general-in-chief.

Even as a child (9 years), Ivan, against the will of his parents, was enlisted for military service. After graduating from the Naval Artillery School and the Marine gentry corps, he entered the service in the fleet. 10 February 1769 was appointed chief of naval artillery. He served in naval artillery, participated in many naval battles, where he showed courage and ingenuity.

During the Russian-Turkish war of 1768-1774. was in the First Archipelago expedition. Russia at that time did not yet have fleet at the Black Sea. The ships of the Baltic Fleet under the command of Alexei Orlov and Admiral Grigory Spiridov were supposed to strike the Ottoman Empire at the Mediterranean Theater. In St. Petersburg, they planned to raise a large-scale uprising of the Christian peoples of the Balkans (primarily the Greeks of the Peloponnese and the islands of the Aegean Sea), disrupt the sea communications of the Turkish Empire, block the Dardanelles, capture important coastal points, thereby distracting Porto from the Danube Theater and Crimea.

In February 1770, the Russian squadron reached the shores of Greece, where it attempted to organize an anti-Turkish uprising. For this landing was landed. The main forces of the Russian fleet headed west of the peninsula and besieged the fortresses of Navarin, Modon (Methoni) and Coron (Koroni). While the main forces of the squadron bombarded Coron, a squadron of 2 battleships (“St. Januarius”, “Three Saints”) and a frigate (“St. Nicholas”) under the general command of Ivan Hannibal laid siege to Navarin. The fighting against Navarin began on March 30 (April 9), when the Russian ships were met with strong fire from the fortress. Entering the bay, the Russian ships stopped at anchor at a distance of a cannon shot from the city. An 8 gun battery made of 24-pound caliber guns was erected on an elevated position on the east side of the city. Another battery of two 24-pound cannons was located at a height lying at the entrance to the bay from the west side. The fire from the Russian batteries led to the fact that a significant gap was formed in the wall of the fortress. The Turkish commandant did not become a hero and ordered the surrender of the city. 10 (21) April, the Russians occupied Navarin. The Russian trophies were 7 flags, 42 copper cannons, 3 mortars, 800 poods of gunpowder and other supplies. Navarinskaya bay was very convenient for fleet parking, and became the temporary base of the Russian fleet.

In the future, Hannibal took part in the Battle of Chesme. In a naval battle, he distinguished himself in the manufacture of firefighters (the ship that was used to arson and destroy enemy ships) and his art of controlling artillery to destroy the Turkish fleet. 27 November 1770 was awarded the Order of St. George of the 3 degree. December 7 1772 was promoted to major general. 10 July 1775 was awarded the Order of St. Anne. 7 July 1776 was appointed the general-lieutenant of the naval artillery. Since 1777, he is a member of the Admiralty College.

18 June 1778, Queen Catherine II, signed a decree establishing the fortress of Kherson and the shipyard (named after the Greek city of Chersonese of Tauris). At this time, the Russian Empire was actively creating a new part of the Russian Empire - Novorossia. The formerly deserted land, the Wild Field, was transformed by the efforts of the Russian people into a powerful industrial and prosperous region, first of the Russian Empire, and later of the Soviet Union. The development of New Russia was led by Prince Grigory Potemkin, who was then the de facto ruler of Russia (the all-powerful favorite of the Tsarina) and who had almost unlimited powers. Kherson became the cradle and the first base of the Black Sea Fleet, the economic and political center of the region.

Under the leadership of Ivan Hannibal, the city of Kherson was founded in 1778, in the same year he was appointed the chief commander of the Kherson fortress. Hannibal zealously set about fulfilling the task entrusted to him. Having formed 12 companies' mouth, he prepared forest materials in the upper reaches of the Dnieper and delivered them to the site. He hired more than 500 carpenters in the inner regions of the Russian Empire, in a short time built a shipyard and in August laid the fortified city. Three years later, there was already a new city with a palace, an admiralty, a foundry house, an arsenal, shipyards, barracks and private houses. The fortress had a garrison and was armed with 220 guns. Various ships were built at the shipyard, military and merchant ships were in the harbor, foreign trade houses appeared in the city. Ivan Abramovich attracted many Greek and Italian settlers to Kherson and its environs.

January 1 1779, Hannibal was promoted to the rank of lieutenant general. In the 1780 year, Ivan Abramovich was granted 10 thousand acres of land. 21 April 1781 was awarded the Order of St. Alexander Nevsky. 16 May 1783 was awarded the Order of St. Vladimir 1-th degree. In connection with the illness, and partly because of disgrace (due to a quarrel with the all-powerful leader G. A. Potyomkin) in 1784, he retired in the rank of chief general. There is an opinion that the anger of Potemkin was caused by the slowness of the work of Hannibal on the construction of ships of the Black Sea Fleet (he did not have the relevant experience and knowledge), and they were urgently needed because a new war with Turkey was coming.

The rest of his life Hannibal spent in his estate Suyda near St. Petersburg. He died in St. Petersburg 12 October 1801, was buried in the Lazarevsky cemetery of the Alexander Nevsky Monastery.