Kiev revenge on the organizers of the "Immortal Regiment"

23 May 2017
27
The arrest of the organizer of the procession "Immortal regiment" in Vinnitsa, Ivan Bondaruk, became known on Monday, he is accused of "treason", reports RIA News a message from the chairman of the Union of Left Forces of Ukraine Vasyl Volga. Bondaruk is his deputy. 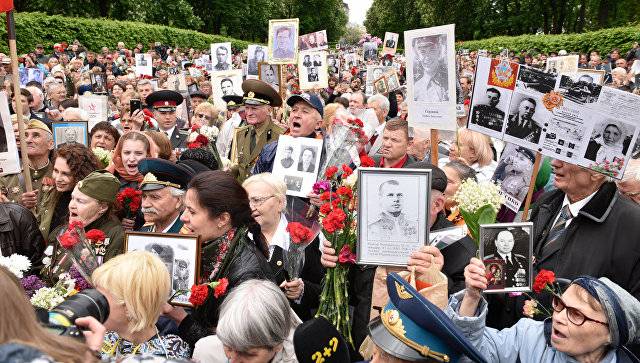 It is reported that “for a similar rally held on May 9 in Dnieper (formerly Dnepropetrovsk), today 14 citizens of Ukraine are suspected of“ participating in clashes that provoked a mass brawl ”, five were selected as a preventive measure in the form of detention, and eight people were declared on the wanted list.

The organizer of the “March of Victory” (analogous to the “Immortal Regiment”) in the Dnieper Alexander Vilkul has not yet been arrested. He has parliamentary immunity. He is a deputy of the Verkhovna Rada from the Opposition Bloc. True, the parliament already has a statement about depriving Vilkul of this very immunity.

But Vasily Parfenkov, an activist of the Organization of Ukrainian Nationalists (OUN, banned in the Russian Federation), who threw a smoke bomb at the police in Kiev on May 9, was placed under house arrest. He will be judged for hooliganism.

The authorities of Vinnitsa tried to ban the march of the "Immortal Regiment", but the court, where Ivan Bondaruk appealed, removed the ban. True, in order not to tease the SBU, I had to change the name of the event. The action was called "Nobody is forgotten, nothing is forgotten." The procession, though with great difficulty, but took place.

A few days later, 17 in May, Bondaruk decided to hold another action: the overlap of the route Vinnitsa - Kiev. The goal - to draw attention to the anti-people, according to the organizer, the policy of President Poroshenko.

But this action did not take place - there were not enough people. But the SBU had a reason for arrest - after all, a protest against the policies of the president. 18 May Bondaruk arrested. At home, during the search, he was found “St. George ribbons, leaflets calling for actions against Poroshenko’s policies and a mobile phone (according to the SBU, the phone was a“ means of communication ”by which 73-year-old pensioner" received instructions from their curators in Russia ")".

According to Vasily Volga, whose deputy for the party is Bondaruk, the pensioner was accused of treason against his motherland, for which he faces up to 15 years in prison.