In Peru, the AMR 156 Pisco helicopter dock was launched

April 27 2017
32
According to the blog bmpd, 25 On April 2017, the ceremony of launching and christening the landing amphibious assault ship AMR 156 Pisco under construction for the Peru Navy took place. This event was held at the enterprise of the Peruvian naval shipbuilding and ship repair association Servicio Industrial de la Marina de Guerra del Perú (SIMA) in Callao (SIMA Callao). Officially, the ship is classified as a "multipurpose ship" - Buque Multipropósito. 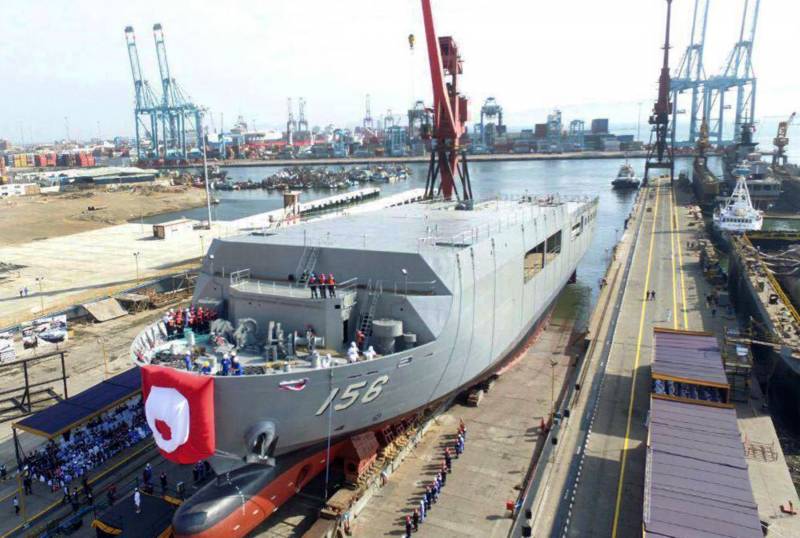 The ship is being built by SIMA under the project and with the assistance of the South Korean corporation Daewoo Shipbuilding & Marine Engineering (DSME) under a contract worth approximately $ 60 million. The ship is a further development of the Makassar-class amphibious assault dock ships built by DSME for Indonesia. It was planned to hand over two ships to the Peruvian Navy in 2015, but it was not possible to meet this deadline, since the actual construction was started only in the second half of 2014. Delivery of Pisco the fleet Now expected in August 2018. The contract for the construction of the second Paita ship has not yet been concluded.

Two 23-meter landing craft LCU type are placed in a small docking chamber, and on the cargo deck up to 14 armored vehicles of the LAV II armored personnel carrier class. The ship has a flight deck with two landing pads for Sikorsky UH-3 / SH-3D class helicopters and a hangar for the permanent deployment of one such helicopter. The ship contains 157 crewmen (including 14 officers and personnel) and up to 400 marines. It is possible to use the ship as a supply vessel. In this case, it is designed for loading 636 tons of fuel, 600 tons of water, 360 cubic meters of dry goods and 136 cubic meters of food.