April 17 2017
60
Promising American heavy aircraft carrier "Gerald Ford" successfully passed the factory running tests, which began on April 8 of the current year. According to Military.comIn total, the ship spent seven days at sea and on April 15 returned to the port of Norfolk, Virginia.


Details about how exactly “Gerald Ford” passed the sea trials are not specified. It is only known that all the checks carried out by the military were recognized as successful. "Gerald Ford" was the first in the last 42 of the year to go out to sea a new type of American aircraft carrier. The previous such event took place on 1 March 1975, when the Nimitz aircraft carrier entered the sea trials. 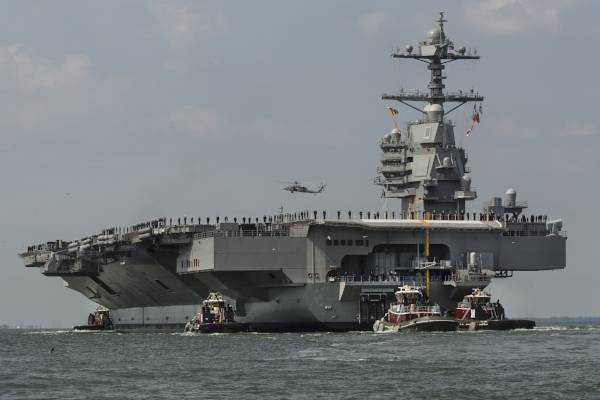 The aircraft carrier was launched in November 2013 of the year. His readiness now stands at 90 percent. The displacement of the aircraft carrier will be about one hundred thousand tons with a length of 337 meters and a width of 78 meters. Draft American ship will be about 12 meters. “Gerald Ford” will be able to reach speeds up to 30 nodes. The crew of the ship will include 4660 sailors.