The interaction of cavalry and horse artillery. Part of 2. Longsart and Black Island

April 13 2017
4
Fight with F. Longsart.
With the further advance of the German armies through Northern France, during the pursuit of the English army of D. French, 26 of August 1914, the cavalry of the 2 of the cavalry corps managed to unexpectedly "cover" the retreating units of the British infantry.


At about eight o'clock, the vanguard of the 2 Cavalry Division, the 5 Cavalry Brigade, occupied the station south of their seats. Cattenier, discovered English infantry at the height of the south-west of F. Longzart, as well as columns of infantry and carts that had come to rest.

Immediately to the position was caused by the separation of heavy machine guns. From a distance of 1000 and 7 machine guns open up a sudden fire at the English troops restlessly resting. The suddenness of this fire causes panic - galloping carts are seen everywhere, people are rushing from side to side. Only after considerable time did the English escort take over the trenches and return fire.

Obviously, to develop the success achieved, the German cavalry had to carry out a lightning attack in the equestrian ranks and shatter the stunned British infantry. But she chose to go on the offensive on foot - together with the Chasseurs battalions, under the cover of the same machine-gun fire.

The British advanced trenches were taken, and only after that the horse-artillery division of the 2-th division leaves for the position and opens fire. But the moment of surprise was missed - by this time the British troops came to their senses. Their heavy artillery inflicted heavy losses on the German cavalry, and although in the end, after hours of gunfire, Longzart heights were taken by the Germans, but at the cost of a large number of dead and wounded cavalrymen.

In this combat episode, the inertia of the equestrian artillery battalion, or rather, the inability to use the power of its own fire during a sudden fire strike, also attracts attention. Meanwhile, it is difficult to imagine a more rewarding goal for using the power of artillery fire, especially in combination with machine-gun fire, than an open mass of infantry and carts. With the start of this battle, the position of the horse artillery was in the front ranks, even with dismounted cavalry, to prevent the enemy from recovering himself and to ensure, if possible, the bloodless success of his cavalry. 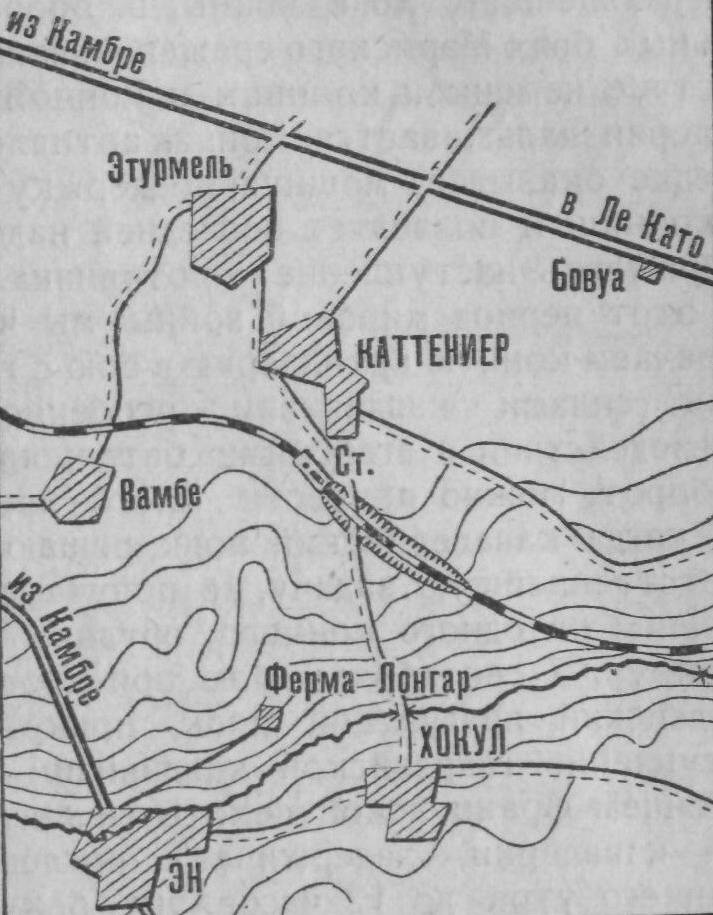 The German cavalry command during this period of the First World War did not realize the importance of its military equipment and the effectiveness of horse artillery fire, which could render its cavalry invaluable assistance. Horse artillery has not yet become a ram, paving the way for its cavalry.

In the battle of der. Halen, because of the inept use of horse artillery, the German cavalry, who had experienced the strength of the Belgian dismounted cavalry on 12 on August, hurried their regiments and launched a slow attack on a target requiring immediate impact in the horse formation. In F. Longsart, instead of using the successful results of the sudden fire attack of machine guns, the shelves of the German cavalry suffer heavy losses, come in long chains and, ultimately, lacking ammunition, they barely hold their positions until the approach of the 4 infantry corps.

Later, in the defensive battles of the Marne battle, the interaction of the German cavalry and horse artillery is getting better. Horse artillery often provides strong support for its cavalry and allows the latter to delay the enemy’s advance for a long time.

So, when 18 August in the battle under der. The first man is brewing the possibility of a large mass of German cavalry colliding with the French 5 th cavalry division from General Sorde's corps, then the horse artillery of the German 4 th cavalry division, which inflicts great losses on the French cavalry, is first launched. As a result, the latter collapses and goes southward, while 2 guns, 2 machine guns and many dead people and horses remain on the battlefield.

But even during this period of World War I can cite many examples when the cavalry regiment, which is solving a responsible task, does not receive a single equestrian weapon for reinforcement. Thus, the German Guards Dragoon Regiment, 7, in September, covering the retreat of the Guards Cavalry Division, retreating under the onslaught of the French infantry and British cavalry, delays the latter from early morning until 12 at 6 o'clock in the afternoon without the help of horse artillery. Due to this, a brilliantly accomplished task causes huge losses in both the personal and equestrian composition of the regiment, which was already very thin in the previous battles.

In late September - early October 1914, during the so-called “Run to the Sea”, the German cavalry fights in the vicinity of the city of Lenz, Lille, Ypres, ie, in areas of developed coal industry. The abundance of settlements, factory buildings, mines make the advance of cavalry in the equestrian ranks difficult. Slowly, step by step, on foot, supported by their horse artillery, the German cavalry moved forward, despite the insistent demand of the higher command to move as quickly as possible in the horse formation - for the most rapid coverage of the Allied left flank. Moreover, during this period, it became clear that horse artillery could not always render adequate assistance to its cavalry because of the lack of projectiles (the period of the German "shell hunger").

Fight for a place Black Island.
From the very beginning of its formation, the Soviet cavalry made full use of the rich experience of interaction between cavalry and horse artillery of the Russian Imperial Army, which acted quickly and efficiently. The illustration is the battle for Black Island.
On the night of 3 on 4 in July 1920, the 8 th Red Cossack Division of the Red Army receives the task: “break into the breakthrough of the location of the Poles, formed due to the offensive of the 60 rifle division and the armored forces of the Red Army at the station Komarovtsi - with. Komarovtsy, destroy the enemy’s rear near Proskurov and the metro station Black Island and then strike in the direction of Starokonstantinov in the rear of a group of Poles gathered against comrade. Budyonny.

On the second day of the movement after the breakthrough of the Polish front, around 16 on July 5, the division commander V. M. Primakov received a report that the city Proskurov and the seats. Black Island is occupied by significant forces of the Polish infantry, decided to suddenly attack the enemy and capture both points.

The 1-th Cossack brigade of the division reinforced with a battery of horse artillery (2 guns), gets the task "to take off the rest in 2 hours on July 6 and through Pedosa, Redkoduby to attack the Black Island town, destroy the Polish units and the supply department there and settle in m Black Island.

As a result, the 1 th brigade, which was leading the way in the vanguard, attacked the villages. Pedosa the enemy infantry stationed there (an outpost before the half-company), hacked it down and moved into the field. Black Island. The enemy’s infantry, raised to its feet by shots of its outpost, met fifty with strong fire and forced it to retreat to the villages. Pedosa

The commander of the 1 Brigade ordered two hundred 1 th of the Cossack regiment to dismount and advance on the Black Island station on foot. The remaining six hundred and two gun battery guns moved around - through Redkoduby to the villages. Zakharov.

For the explosion of the railway track to Volochisk to the station Voitovtsy fifty has advanced. Division 2-th brigade occupied villages. Voitovtsy, blew up the bridge on the railway line and began to attack villages. Grushevitsa.

The dismounted division of the 1 regiment rushed to the station, leading an exchange of fire with the enemy.

A squad of 2 battery opened fire on the station. A firefight ensued.
All the attention of the enemy was drawn to the south, where in the area from the village. Pedosa to Art. Grushevitsy he saw equestrian and dismounted Cossacks.

In the midst of a firefight from the direction of Zakharov, they opened fire on the guns of the 1 th horse battery.

1-I brigade from the north-west broke into places. Black Island, but was greeted by strong fire. The 2 th regiment was at a gallop in a hurry and knocked the enemy out of the town on foot. And when the Poles' infantry left the town in the field, it was attacked by a division of the 1 regiment in the equestrian ranks. The cutting has begun.

The 2-th regiment arrived, and the Polish infantry was hacked down - a brigade in the equestrian ran to the station. From the villages. Pedosa the 2 division of the 1 regiment, also mounted on horses, broke into the station.

Since the Polish infantry was hacked down, there were no prisoners.

In this battle, the interaction of horse artillery and cavalry was carried out to the appropriate extent and gave excellent results. If at the first moment the Poles were able to put up some resistance on the 1 th brigade by opening rifle and machine-gun fire, this is because 2 equestrian guns could not in a short time have an overwhelming effect on the enemy’s infantry occupying the trenches and buildings on the outskirts places Black Island. 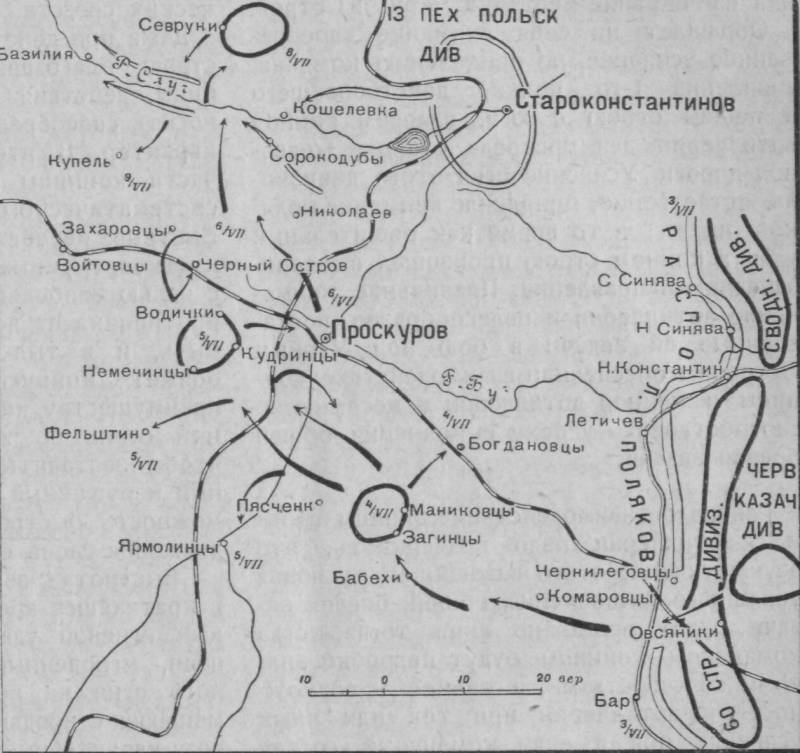 It is noteworthy that the division of the 1 regiment, which was active on foot from the south, was reinforced by a platoon of horse artillery that began to fire on the railway stations. The intensification of the fire of this division naturally attracted the attention of the Poles to the south, while a decisive blow to the equestrian force occurred in the north-west direction.

The correct use of artillery and expediently assigned tasks in the battle near Black Island ensured the interaction of cavalry and horse artillery and contributed to the success of the overall combat mission.

The quickness of taking a position, the ability in the shortest time to inflict a crushing fire strike on a tactically important target, the instantaneous transfer of concentrated fire to newly emerged targets that impede the advancement of their cavalry - these are the characteristic features of the combat work of the horse artillery in close cooperation with their cavalry.

Only when the nature of the terrain and other tactical conditions, as in the area of ​​Lenz, Lille, Ypres, cause the cavalry to act solely on foot, only then can horse artillery, in close connection with the cavalry, function according to the “general rules for artillery”.