The nuclear submarine Kazan is withdrawn from the boathouse and launched

March 31 2017
45
The second multi-purpose nuclear submarine (APL) of the project "Ash" - "Kazan" - was launched from the boathouse and launched on Sevmash, reports TASS from the scene.
The general director of the plant, Mikhail Budnichenko, gave the team for the withdrawal from the boathouse, after which the commander captain of the first rank Alexander Beketov broke the ceremonial bottle of champagne. The event was also attended by Deputy Prime Minister Dmitry Rogozin and Commander-in-Chief of the Russian Navy Admiral Vladimir Korolev. 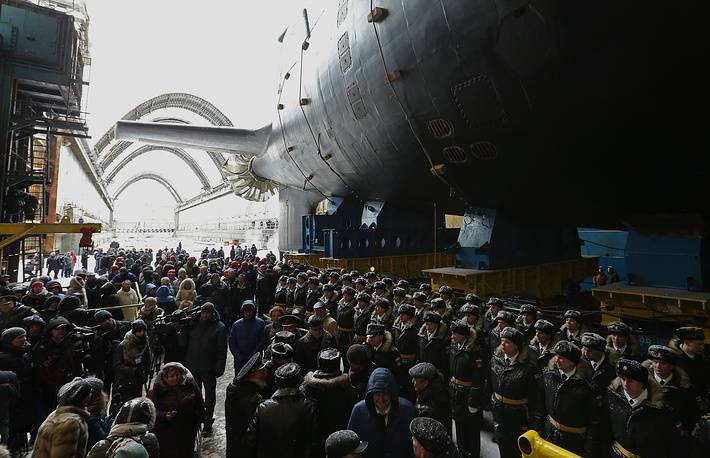 The launching of the modern underwater multipurpose cruiser of the improved project "Yasen-M" is really an event for the whole country, for the Armed Forces, for the Navy. Together we carry out a construction plan approved by the government. A group of submarines is being created that will solve tasks in any areas of the world ocean and ensure the safety of Russia,
- Admiral Vladimir Korolev, commander in chief of the Russian Navy, said at the ceremony.
Dmitry Rogozin said that due to the presence in the Russian Navy of ships of the similar nuclear submarines Kazan, Russia will be able to firmly and confidently defend its interests in the international arena.
Today we are present at the time of the withdrawal to the finish line of a very beautiful, powerful ship - the multi-purpose nuclear submarine Kazan,
- He said at the ceremony of withdrawal from the boathouse of a new submarine. -
Yesterday in Arkhangelsk we completed the work of the international forum "The Arctic: Territory of Dialogue". But dialogue must be maintained in a firm and confident voice, and we will always have such a firm and confident voice when we have such boats, when our shipbuilders have such results. "
The Deputy Prime Minister, on behalf of the College of the MIC and on behalf of the Russian government, thanked the Severodvinsk shipbuilders for their work. 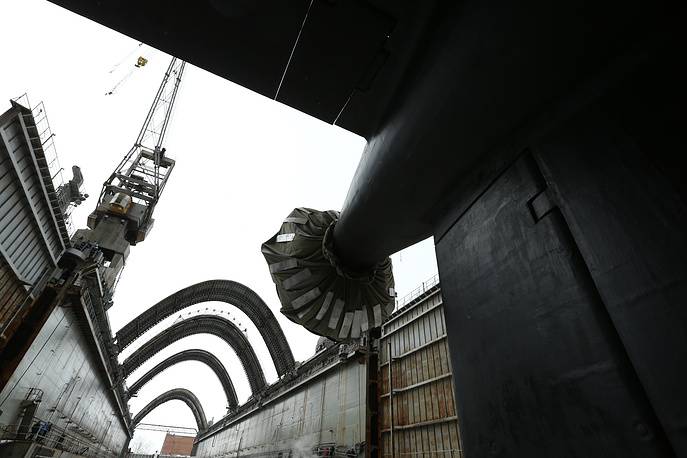 Kazan is the second Ash-type multipurpose nuclear submarine. It was laid at Sevmash in 2009. Being the second in a row submarine of the series, it is the first representative of the improved project 885M. As expected, "Kazan" will be transferred to the Naval the fleet Russia in 2018, it will become part of the Northern Fleet, where the lead submarine of the series, the Severodvinsk, is already serving.
Nuclear-powered submarines of the Yasen type were designed by the Malachite St. Petersburg Marine Engineering Bureau. They are intended for the destruction of enemy submarines and surface ships, for striking naval bases, ports, ship groups and other targets. In addition to the torpedoes, their armament includes Onyx and Caliber cruise missiles.
"Ash" refers to the fourth generation of multi-purpose atomic submarines. On them, unlike their predecessors, torpedo tubes are not located in the nose section - there is a hydroacoustic complex with a spherical antenna, which allows detecting an enemy at long distances. In addition, the submarines of the 885 (M) project have a unique one-and-a-half structure - the light hull is only in the bow and in the area of ​​rocket mines.
In addition to the "Kazan", the multi-purpose submarines "Novosibirsk", "Krasnoyarsk", "Arkhangelsk" and "Perm" are being built on the "Sevmash" according to an improved project. Total for 2023 year planned to build seven "Ash". The seventh submarine is planned to be laid in the summer of 2017.

Ctrl Enter
Noticed a mistake Highlight text and press. Ctrl + Enter
We are
USS Illinois Multi-Purpose Submarine (SSN-786): The New US Navy Its ProspectsRogozin visited Nizhny Tagil, shot from a tank and a gun
45 comments
Information
Dear reader, to leave comments on the publication, you must to register.