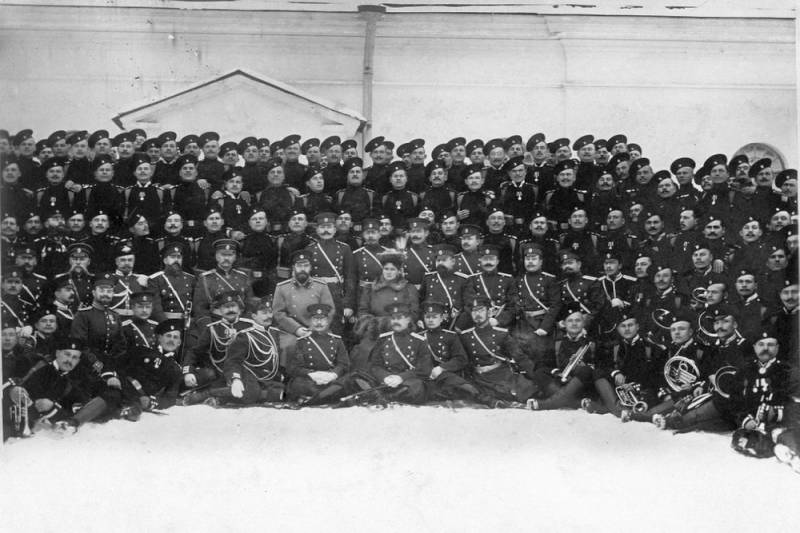 Nicholas II and Empress Alexandra Feodorovna among the soldiers and officers of the consolidated company of the Life-Guards Volynsky Regiment. December 1906 of the year.


The uprising of the Petrograd garrison, which brought victory to the February revolution, began with a riot in the reserve battalion of the Volynsky Life Guards Regiment.
But how could this happen?

After all, the Life Guards Volynsky was the most disciplined in the Russian army!

He stood out even against the background of the other regiments of the 3 th Guards Infantry Division - famous for its "convict" discipline and exemplary appearance of a soldier. 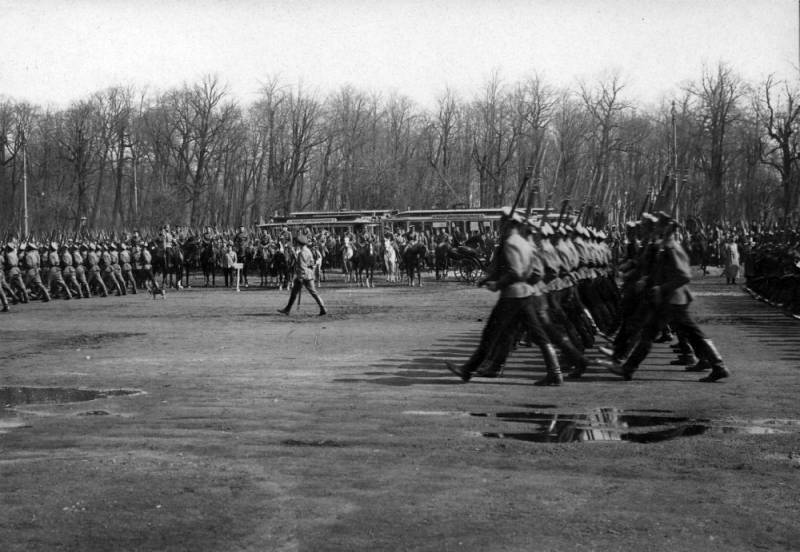 Discipline in the soldiers of the 3 Guards forged at every turn. To do this, they sought from them an exemplary appearance, perfect drill training and strict observance of internal order. After all, accustomed to accuracy in trifles, accustomed to do only what is necessary, and only when it is supposed, does a person learn to observe the established rules, to subordinate his will to someone else.

“Strictness - neither breathing nor breathing; you can’t stretch your legs without the authorities' sanction,” wrote one of the 1914 fallen in September to the reserve battalion of the Lithuanian Life Guards regiment. “You want to go to the toilet — go with a report to the separated truck. [.. .]

Boots in fact do not shine - outfit out of turn. Buttons dim - outfit.

Klyamor not shines - walk in a goose step. "

Yes, in the 3 Guards they were forced to clean the belt that was not even visible under the badge (clasp) belt. And the main teachers of the soldiers — non-commissioned officers and corporals — used “methods of training and education not provided for by the then charter”.

“Some walk in a goose-pitch”, “others run around the stable with caps, with straps, with bowlers, with mugs, with footcloths, with socks, with boots in their teeth” - and everyone, “trying to shout over each other, yell:

After such a training, people executed orders automatically.

Indeed, in combat, a person turns on a powerful instinct of self-preservation. To suppress it, the consciousness of many may not be enough. It is here that the habit will rescue without hesitation, automatically, almost instinctively, carry out orders.

So, in the Life Guards Volyn discipline forged even more insistent than in the other regiments of the "convict" division. 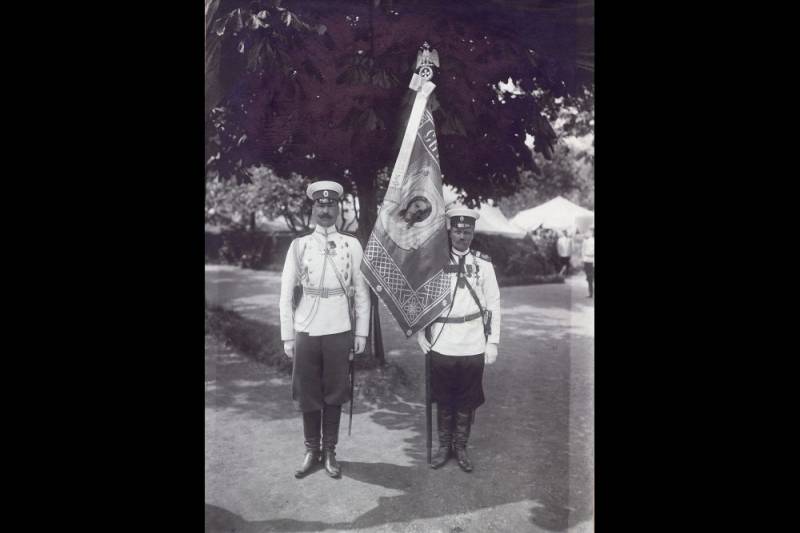 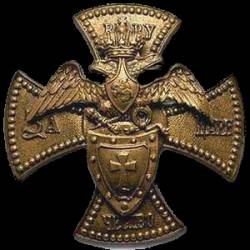 “Special clarity is decisive in everything: in honoring, marching, gun techniques, in every movement, Volyntsev always and everywhere distinguished,” the officer of the Finnish Life Guards admitted to 1930.

Volyns were able to preserve this distinctiveness even in the First World War when the regiment changed its ranks more than once. “A firm step, as in a parade, a perfect alignment, a special hand-waving [back to refusal - Auth.], By which the Sovereign recognized our soldiers even when they, being transferred to another regiment, were already wearing a different form. Thin dash the bayonets, strictly aligned along the rows in the horizontal and vertical plane, are completely immobile ... "So the Volhynians passed before the authorities in July 15 on July 1916, on the march in the front line.

The regiment naturally fought, not paying attention to death. Having seen the yellow braid on the cuffs of Russian tunics in July (1916 Guards Infantry Division), and on the slats, along the cut, it was dark green (the fourth regiment of the division, Volynsky Life Guards), the German prisoners revived: "A- a, the regiment sign [regiment (German). - Auth.] ... Iron regiment ... "

And it is only seven months before the historical rebellion.

"Discipline was visible in everything and manifested itself at every turn," - so, according to the recollections of the then regiment commander, it was still February of 1917. 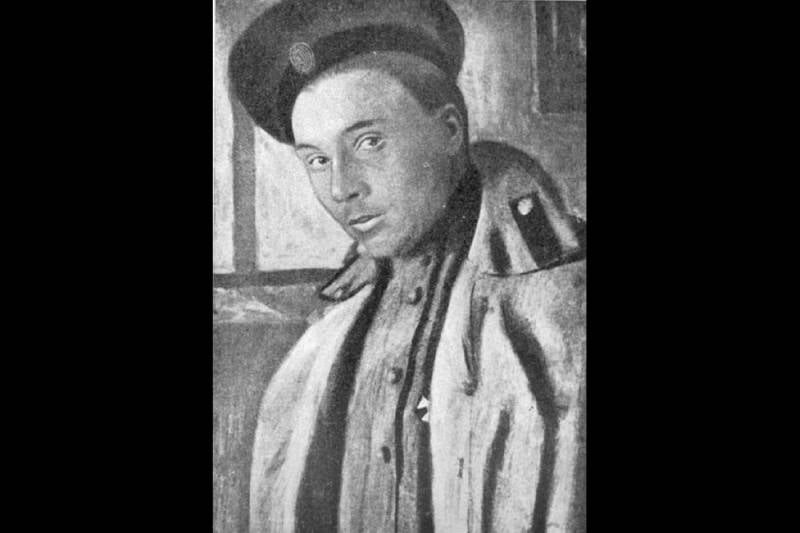 And here in the reserve battalion of this unit the training team rebelled! The one where the non-commissioned officers were trained - those who himself had to discipline the soldiers! Yes, and with such a head of the training team, as the staff captain Ivan Stepanovich Lashkevich ...

About this "girlish ruddy, with a round Russian face and clear good big gray eyes" officer, who was 26 year in February, suffice it to say that this is the former sergeant major of the Alexander Military School.

This is the mark.

This means - a great soldier and mercilessly demanding boss.

Only such junkers were appointed to the post of sergeant-major (in Soviet style, foremen). After all, the sergeant-major, the direct head of all the junkers of his company, was responsible for the order in her.

According to the testimony of a number of officers of the Volynsky regiment, as well as Colonel M.N. Levitov (already in the summer of 1917 of the year, he spoke with the ranks of the reserve battalion), and the instigator of the riot, senior noncommissioned officer Timofey Ivanovich Kirpichnikov also had the reputation of a strict chief. The soldiers even called him "Fight."

Smile of fate: it was Kirpichnikov on the night of 26 in February that Lashkevich appointed Feldweiler 1 of the company (a few days before, two companies had been formed from the ranks of the main training team to suppress possible unrest), instead of the urgently "ill" ensign Lukin. From the story of “Mordoboy” about further events, it is clear that Lukin’s main post, field officer of the main training team, was also transferred to him (there were two more preparatory and additional).

Lashkevich’s decision became fatal - both for his personal fate and for the fate of Russia. 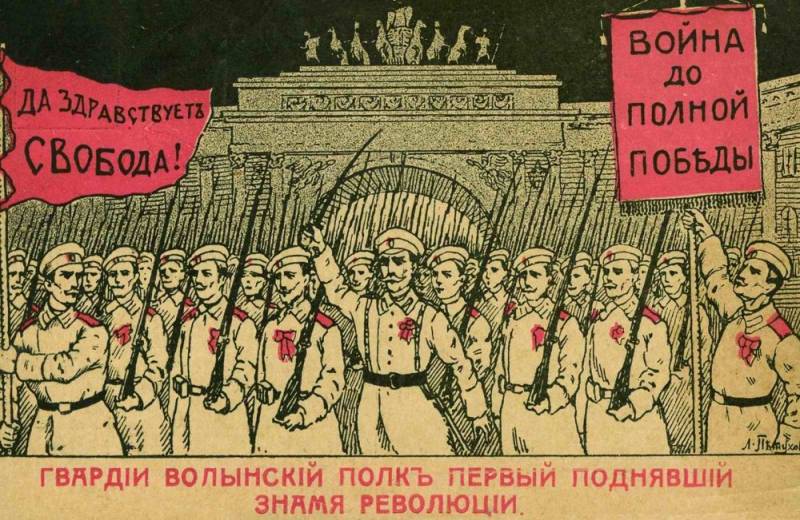 Murder before the formation

According to Kirpichnikov’s later narrated story, he slowly ordered the soldiers to target over their heads, and on the night of 26 he suggested that the “unters” of both companies not shoot at all. In the evening, 26-th convened platoon and division commanders of the main training team and suggested to refuse altogether to pacify the riots.

They agreed. Instructed their soldiers. And in the morning of February 27, the team built for Lashkevich’s arrival defiantly and grossly violated discipline.

According to Kirpichnikov, the team shouted "Hurray!" after the captain said hello to him. According to Konstantin Pazhetny, who was in the ranks, this was the answer to Lashkevich’s greeting to the team.

To Lashkevich's question: "What does this mean?" Junior non-commissioned officer Mikhail Markov answered, and it became clear that the team had rebelled. The order to fire (according to Pazhnykh’s version, Lashkevich’s orders in general) will not be carried out by people, Markov said.

And, taking a rifle "at hand", sent a bayonet to the staff captain.

The next minute, the rebels demanded that Lashkevich withdraw.

And when he appeared in the courtyard, Markov and the corporal Orlov shot him from the windows - and they killed him on the spot.

(According to the version of the officer who later asked the soldier, the team twice answered in silence to the greeting of their chief: after this, Lashkevich himself went away, and Kirpichnikov shot him. But is it possible to reject the testimonies of two eyewitnesses?)

After the murder, Kirpichnikov persuaded to join the main training team and the "noncomors" of the preparatory teams. And when they went outside, they were joined without any persuasion by the 4 Company. 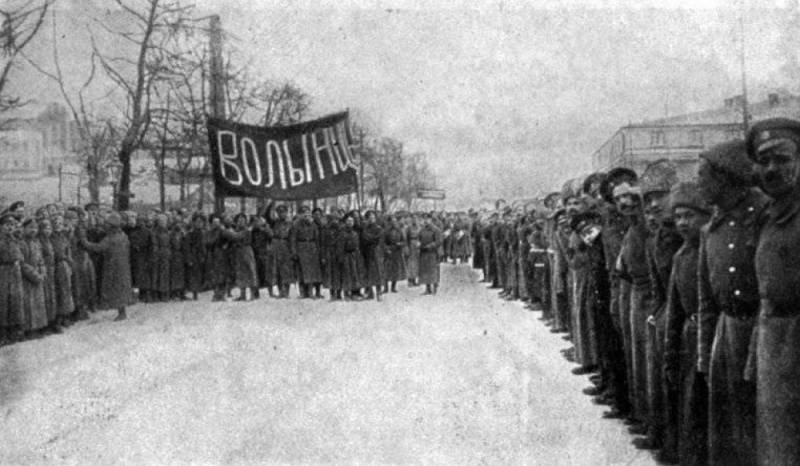 It is quite understandable that the Volhynians did not want to shoot at demonstrators at all. His, Russian, asks for bread - is this a rebel?

Here, first of all, it was backfired that the soldiers and most of the “noncoms” of the reserve battalion did not test the Volyn drill in full volume.

Almost all of the old servicemen died by October 1916, by February they were miserable. Volyntsy 3 Company of the reserve battalion - who refused to shoot at February 26 demonstrators - these are recruits who have not served 6 weeks! The same in 1 and 2 companies.

The front-line soldiers of the beginning of 1917, at least, were not afraid to argue.

The soldiers of the 4 Company and the people of Lashkevich were trained for two to five months. This last automatic to carry out orders to shoot at demonstrators was also hampered by front-line past.

In the reserve battalion, they were already the second time.

In the interim were the front and the wound.

And not just the front, but the offensive battles of August - September 1916 of the year in the Vladimir-Volyn area. Those who went through this meat grinder were no longer afraid. More terrible than the German front will not be! It was not by chance that they rebelled first in the battalion.

The front-line soldiers of the beginning of 1917, at least, were not afraid to argue.

And how can you not argue, if by the evening of the 26, the inaction of the authorities became noticeable?

And captain P.N. Gaiman silently swallowed the refusal of the 2 preparatory training team to shoot at the crowd rushing across Liteiny Bridge to Liteiny Prospect.

Actually, a dozen two passionaries like Kirpichnikova and Markov ensured the success of the uprising. After all, many Volhynians did not want to rebel. 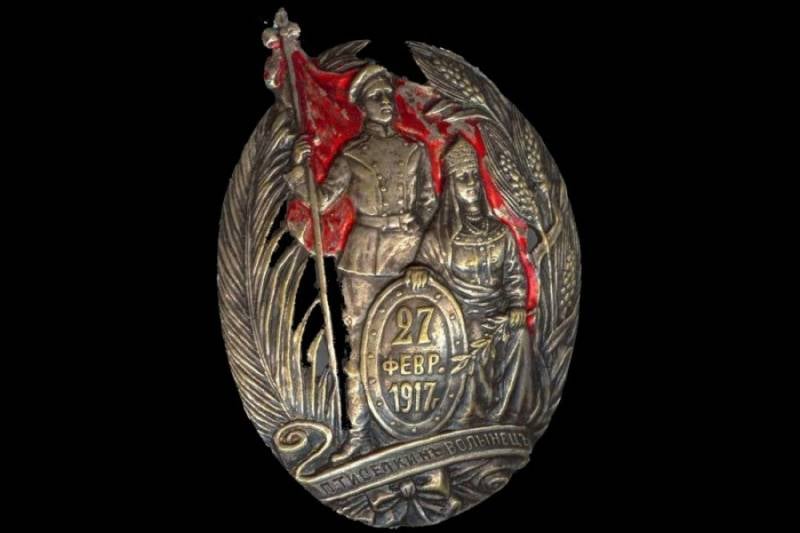 A part of one of the Volyn companies — stationed in the barracks of the Life Guards of the 1 Artillery Brigade in Baskovaya Street (now Korolenko Street) —formed against even February 27 noon. She returned to the barracks in an organized manner, when Colonel A.P. Kutepov assured that they would not shoot her.

But in the center of the riot, in the southeastern part of the Tauride barracks, at the end of Vilensky Lane, many people were cut off the way back to Markov and Orlov.

Now or go to the end - or under the execution. For participation in a riot, burdened by the murder of an officer.

There is nothing to lose!

"On the ple-cho! Step march!" - Kirpichnikov ordered, and the training teams with the 4 th company marched along the Vilnius to the nearby barracks of the 18 sapper battalion - to raise other Volyn companies stationed there.

"Massacre" reported that machine guns were set in front, and, not even reaching Fontanna, he deployed a detachment. Nothing, let's go the other way and turn left to the Parade. We will raise the reserve battalions of the Preobrazhensky Life Guards and the Life Guards of the Lithuanian Regiments stationed in the Tauride Barracks.

There is nothing to lose! - and, having broken in with the Parade, with firing and shouts of "Hurray!" into the courtyard of the Tauride barracks, the soldiers with buttonholes with dark green and yellow edging on their overcoats an hour and a half “fought” to rebel soldiers with red and yellow.

Those, too, found Kirpichnikovs - senior non-commissioned officer Fedor Kruglov raised the 4 squadron of the reserve battalion of Preobrazhensky. People were tied up here with blood: the Volyn residents slaughtered the head of the Transfiguration workshops, the army lieutenant colonel Bogdanov ...

The crowd of rebels, which has become a crowd of thousands of thousands, passed the Parade and turned left, to pick up other units on Kirochnaya Street!

There is nothing to lose!

Further along Kirochnaya, on the corner of Nadezhdinskaya (now Mayakovsky Street), the Petrograd Gendarme Division was quartered. The gendarmes were brought to the street, followed by the junkers of the Petrograd school of warrant officers of the engineering troops located diagonally.

Indeed, crowds of protesters have already joined the soldiers. The building of the District Court was already burning at the corner of the Foundry and Shpalernaya District - part of the divided mass of the rebels penetrated there as well. Already arrested and killed the police. The emissaries of the members of the State Duma, who had decided to seek the king’s abdication, were already leading groups of soldiers to the Tauride Palace, where Duma members gathered ...

The riots turned into the February revolution.