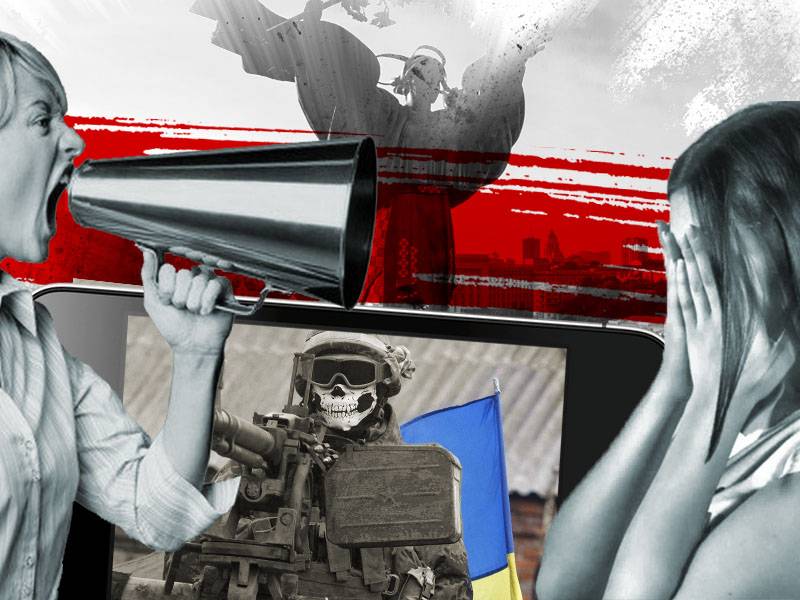 Separatist scandal. In Kiev. Yes, and in one of the prestigious educational institutions of the city. It sounds crazy, but nonetheless, it is a fact. Like the fact that in fact the scandal will conduct an inspection of the SBU.

So, Kiev's Slavic gymnasium found itself in the center of a scandal with accusations of "mass domestic separatism." Why would you think? Because of the refusal to help the participants of the ATO. 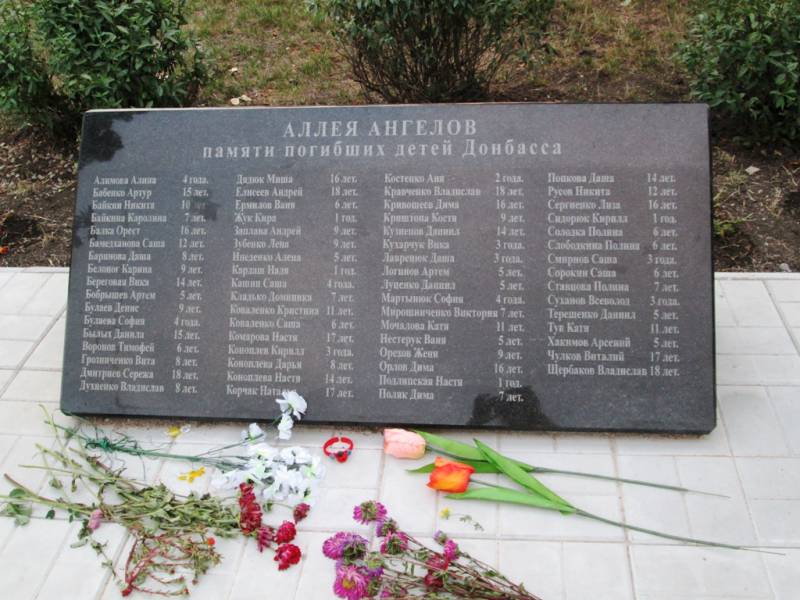 It all started with the fact that in the parent chat of one of the classes in Viber, another message appeared on the topic: "Dear parents! If there is an opportunity to provide assistance to our ATO soldiers, then tomorrow should be brought (followed by the list). The volunteer car leaves tomorrow." 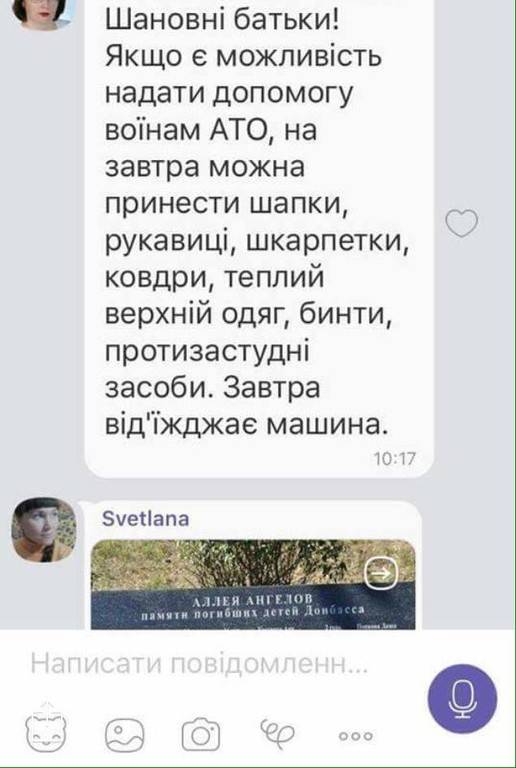 But one of the parents by the name of Svetlana, in response, posted in the group a photograph of a monument in Donetsk to the children who died in the Donbas - Alley of Angels. 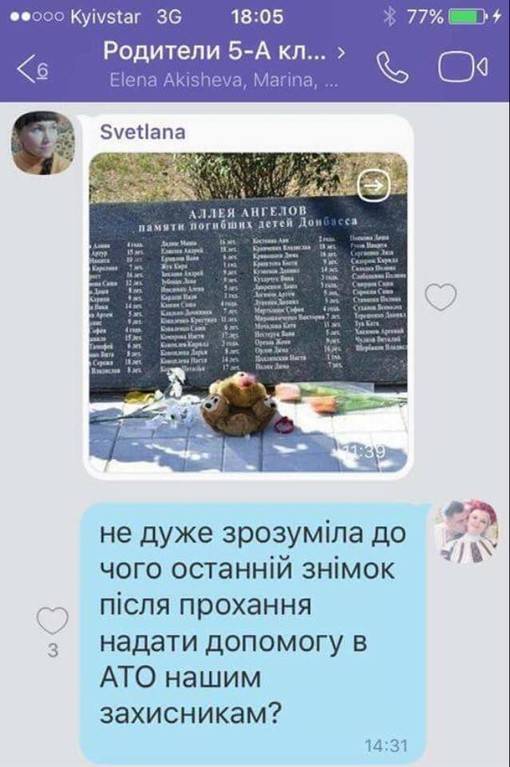 Here, a volunteer Tatyana Popova appeared on the arena, which, in fact, was the organizer of the gathering. 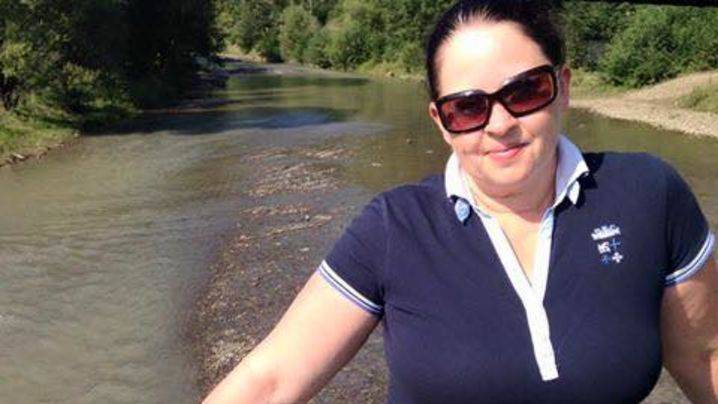 She was naturally outraged by the posted photo. And Popova asked quite a normal one from her point of view, the question: “I didn’t quite understand what the last picture was after the request to provide assistance to the ATO to our defenders”.

The answer was, on the one hand, simple, and on the other, it gave rise to the expected Internet ... well, you understood that.

“This is a photofact. On the monument are the names of the murdered Ukrainian children. And there is nothing more to say, ”answered Svetlana. “I, in my turn, didn’t understand much, Tatyana, about which“ defenders ”we are talking about, because my compatriots in the Donbas have never threatened me and my homeland.”

Naturally, Svetlana was immediately labeled "separatist." After that, the Kiev resident moved from Ukrainian to Russian and wrote the following:

“The government will change three hundred times, it has been repeatedly in our land. Of course, I would prefer that children and me not be dragged into dubious initiatives, which will inevitably receive an adequate legal assessment. And also my children. It seems that they quite successfully cope with the curriculum, and crippling their souls with what is happening now is forcing them to draw pictures of atoshniki and collect alms for them ... this is completely unacceptable.

For me, no Ukrainian, either from the Donbass or from Lviv, will become an enemy, no matter what is told on TV. By the way, and Russian too. I also teach children. And the best that the authorities can do for those who send the same Ukrainians to kill is to arrange a rehabilitation, primarily a psychological one.

I am truly sorry for all the hostages of this situation. ”

Vadim, Svetlana's husband, also did not stand aside.

"No one dares to force my child to write letters to people in the army who iron the peaceful population of Donbass."

These are the Kievans ...

Other parents tried to hush up the scandal, asked to communicate only on topics relating to children. As a result, the administrator removed both Svetlana and Popova from the group, but as it turned out, everything had just begun.

Quietly and without screaming, having familiarized themselves with what Popova wrote, almost all parents ... refused to help the Ukrainian military. Specifically, only 2 from 32 families brought help ...

Having flown into Mars orbit from Popov's outrage, she posted a correspondence in her Facebook.

"I was upset that people with such views were defiant.
... I was caught up with those separatists in fact because they removed both her and me from the group. "

And Popova rushed to find the truth ... in the SBU. True, warning the school about his statement.

"The school management is aware of the application to the Security Service of Ukraine, and I asked those parents to warn them so that they would not be surprised if people from the authorities wanted to communicate with them. I cannot react to this."

At school, according to Popova, she was assured of the pro-Ukrainian position of the educational institution.

"They understand my indignation. We agreed that at the nearest parental meetings, not only in our class, but in all, there will be a conversation about patriotic education, and the school will declare its patriotic position to all parents."

But what amazed or outraged Popov most of all was the fact that not one of the families that refused to apply for attorneys was immigrants from Donbass. For some reason, after a while, Popova’s record was removed.

Popov was supported by the famous host of the Fifth Channel, Vitaly Gaidukevich. He called what happened in the gymnasium in the "third year of the war" mass household separatism. He wrote a lot, but ... then he deleted it too. However, this is the Internet, and not everything written can be permanently erased. This is not a monument to you. 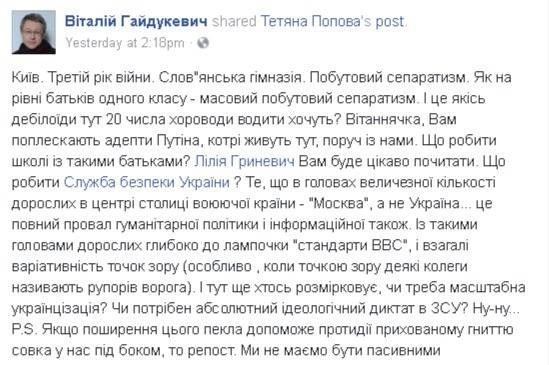 "This is a complete failure of the humanitarian policy and information as well. And then someone ponders whether large-scale Ukrainization is needed? Do you need ideological dictates in the Ukrainian Armed Forces? Well, well ... If the spread of this hell will help the hidden rot of the scoop at our side, then ... We can't be passive. "

Here's a история. These are the people of Kiev. And if you carefully follow what people write in social networks in general, then you begin to understand that even those who rode, little by little begin to see clearly. And it is encouraging. Well, who was not a zombie, he remained a man. But people are not always comfortable living in Ukraine.