New war in Ukraine: from Avdiivka to the disappeared DRG 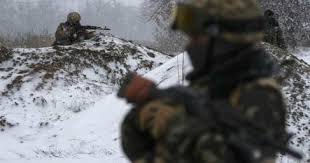 For us, fighting in the Donbas has become something familiar. However, recent events have forced to think and draw conclusions that it is not all that simple. And what is happening in the republics, and all Ukrainian perturbations are links of one very dirty chain.

Since the end of last year, we have constantly received information that the Armed Forces of Ukraine are building up their forces on the line of demarcation. Shelling intensified, seizures of small areas of neutral territory took place. And - burst. But why Avdiivka?

Here we must first look towards Kiev. After all, there is also a war. The war between the oligarch Poroshenko, part-time president of Ukraine, and the oligarchs of Ukraine, who did not want to be under the slightly trembling hand of Peter Alekseevich.

And, it is worth noting, the oligarchs are losing this war. In December we actually missed a very important fact. Namely, the nationalization of "Privat". Meanwhile, this event is very, very remarkable. Selecting such a structure from the most influential person in Ukraine - this only means that Kolomoisky is no longer the most influential and richest person in the country 404.

The pressing and nationalization of Privatbank can be considered in two ways. But even if this is the real compensation of Kolomoisky to the President of Ukraine, this speaks volumes. And if you just “spin”, then there is nothing to talk about. Kolomoisky lost the Poroshenko war, and lost unconditionally.

This can be confirmed by the behavior of his “loyal” political jackals - Lyashko and Sadovoy. It’s hard to say, “Samoposhom” and “Radical Party” just went over to the side of the strongest, or also became “trophies”, but the fact is that today these parties openly support BPP. Strange? Absolutely not.

Yes, Sadovy was helped a little by organizing several scandals in Lviv, but ...

The situation can be interpreted as follows: Kolomoisky surrendered to the mercy of the winner and paid a contribution. He took the vassal oath, that is, they agreed that they would not take anything away from him yet. To poverty enough.

Go ahead. Who is Number Two in the list of those who are not very Poroshenko? That's right, the owner of the Donbass Rinat Akhmetov. Demonstrating a certain independence and ability to negotiate with everyone. Bringing still on the territory of the LC and the DPR their humanitarian convoys and exporting the products of their factories from there.

Exported, exported and will be exported. Today's day is such that either you serve or work for Akhmetov. This applies to the LC, and the DNI. Shells are not rubber, but everyone wants to live. And who are more fortunate, who less. Those factories that work can provide workers with money. For example, as the same Alchevsk MKK. Works. But I’ll come back to AMKK again.

And, unfortunately, residents of the republics have no way out. Nationalization will not give anything but empty pockets. I refer to the words of A. Khodakovsky, when he answered the question why Ukrainian enterprises have not yet been nationalized.

“We are not solving the issue of the same nationalization, for example, of Rinat Akhmetov. Because if we take these assets, where will we deliver these products? If we can produce. Because immediately we must immediately determine where we will take the ore, coke ... And if Akhmetov supplied all this from his own enterprises, then where will we take it? And who will take the finished products from us, if, in principle, the Russian market is oversaturated with the offers of the Russian metallurgical enterprises ”.

So what is there not a city, but there will be no Akhmetov - there will be no life in the Donbas. Patriotism ends simultaneously with food in the fridge and hryvnia in the wallet. Yes, Akhmetov pays hryvnia. Tugovato it with rubles, but the hryvnia is better than nothing.

So, Akhmetov. Next on the list Poroshenko. It is clear that the president, he is the king of all Ukraine, should be the fattest. And for this you need to devour competitors. And what happened in Avdiivka is an excellent illustration of the war between Poroshenko and Akhmetov.

What suffered the most as a result of the fighting in Avdiivka? That's right, Avdeevsky coke plant. The one that a year ago almost all of Ukraine was saved. Today?

In general, I don’t know how anyone, but I’m rather bad at believing that the militiamen, who so vividly demonstrated their increased artillery shooting skills, suddenly blundered and walked around the plant. And at the same time along power lines owned by DTEK. Also the brainchild of Akhmetov.

And not by agreement with Akhmetov. Not. After shelling from the side of the Ukrainian Armed Forces, it was the Donetsk residents who were restoring these lines each time. And then suddenly they took, opened up the plant, and power lines ... Strange ...

More, honestly, I will believe in the work of the APU artillery systems. It was from the rear, from the places where they took their heavy guns and howitzers. Militias is unprofitable, they then again restore all the lines. But Poroshenko-quite. Stopped and de-energized plant - this is not a weak blow to Akhmetov.

Demonstration of the principle of "who benefits."

Go ahead. Next we have Mariupol. Bucket Akhmetov. I will cite the words of Azovstal director E. Tskitishvili: “Enterprises located on the tubing (uncontrolled territories - approx.), But registered in Ukraine, monthly supply the Mariupol metallurgical enterprises 70 thousand tons of flux, 60 thousand tons of coking coal, 35 thousand tons of coke, 40 thousand tons of anthracite. In addition, they provide coal to the Avdeyevka Coke Chemical Plant, which, together with the city, not so long ago, Ukraine saved "the whole world." Alchevsk coke also goes to Azovstal and Ilyich Iron and Steel Works.

Available? Clear? Coal Avdeevskiy Coke is not needed. Who is losing? Lost and Akhmetov, and those residents of the DNI and LC, who lived on it.

Alchevsk coke also goes to Akhmetov’s enterprises ... And why was the public so surprised recently? Is a shock DRG missing in the territory of the LC? According to sources, one night there was a certain noise with special effects in the area of ​​Zimogorye village. If the information is correct, and there is no doubt about the competence of the people who told them to do so, then the DRG marched through Lugansk, without going to Lugansk. Behind Carpenter’s head, for example. It is possible that they went to Alchevsk. But not reached.

Again the question: why?

The fighting in the Donbass is entering a different phase. The dirtiest. Redistribution of spheres of influence in the "top". It is no longer a matter of wanting to force the residents of the DPR and the LPR to speak in a huge move and return the Donbass to Ukraine. Poroshenko’s desire to become the richest person controlling the whole country is obvious.

And not for the Ukrainian Donbass people will die on both sides of the front line. For the opportunity for the oligarch, in combination with the president, to become even richer. And at the same time kill two enemies: and Akhmetov, knocking out Donbas enterprises from under him, and residents of the republics who live solely by working in these factories.

A good plan someone came up with Petro Poroshenko. And, what is the worst, he has all the chances to make this plan a reality. Well, if the dollar flow is able to compensate for Poroshenko's final loss of human appearance, God bless him. Although to judge Peter Alekseevich will not be a god. I very much hope that it will happen so sooner or later.

In the meantime, another round of confrontation in the Donbas is not far off. And the stronger the whole world will turn away from Poroshenko, the more aggressive will be his attempts to take the whole of Ukraine into his oligarchy. And it will be paid by those who are on the front line today.

However, everything is as usual. History I knew many such examples.