Rescuers of the fatherland ...

February 14 2017
115
A significant date is approaching - the centenary of the October Revolution (before 1924, in Soviet Russia, it was celebrated as a coup). There were many articles, videos, interviews with politicians and political scientists. Estimates are different, not the same in their meaning. Someone praises and nostalgic for those times, someone criticizes. But I was struck by the phrase Zyuganov in one of his interviews: "The Bolsheviks saved Russia from collapse in 1917 g .... and thanks to the CPSU (b) the USSR won the Great Patriotic War ..".


I'll start from the fact that история Russia did not start in 1917, but much earlier, and there were no Bolsheviks in those days, but Russia, for some reason, held out. I will not remember all the significant events in the history of my country, but I would like to dwell on some.

The famous Kulikov battle in 1380 was the troops of the Moscow Prince Dmitry and his allies, on the one hand, against the troops of the Tatar-Mongol khan Mamai and his allies. If you believe the works of our historians, before the campaign, Dmitry Ivanovich visited St. Rev. Sergius of Radonezh, who blessed the prince and the entire Russian army to battle with foreigners. And we won this battle, I do not think that thanks to the blessing of Reverend Sergius. We won thanks to the strength of our spirit, courage and sacrifice of our warriors. They fought for Russia, for their people, according to our historians. On the activities of any parties (including the CPSU (b)) at that time I did not find information anywhere.

In the Time of Troubles, in 1612-13, the time when Russia really stood on the verge of death, there were people who sacrificed their lives and wealth for the preservation of our state. The militia of Minin and Pozharsky expelled the Poles from Moscow and from Russia. Money for armaments, salaries, material support of the militia was collected by the whole world. There were only volunteers in the militia, and again our warriors (mostly peasants) won.

Moreover, after this victory, neither the Kazan kingdom, nor other conquered or annexed territories came out of Russia. They didn’t come out, why, I don’t know, probably, the non-interference in the internal affairs of these territories of the Russian tsars suit. Moreover, it is believed that Minin was a Tatar. There were no parties at that time, including the CPSU (b).

In 1709, during the Battle of Poltava, which was of great importance for our Russia, our soldiers (mostly former peasants), sacrificing their lives, defeated the strongest armies of the time and, I believe, saved Russia. And again, I note that there were no commissioners and political directors there.

During the World War 1812, our people survived, despite the fact that almost all of Europe came out against us, won. Our peasants did not run to surrender or go over to the side of the French, but went to the militia, to the partisans. Our people fought for their Russia. And again without the participation of any parties.

In 1917, unfortunately, our king showed his complete inability to lead the state. And at once, as in “Time of Troubles,” there were people who could not care less for anything but their personal ambitions or wallets. During the war, there were parties and their leaders (not only Bolsheviks and Social Revolutionaries) who did not care about Russia and its people, hiding behind slogans of various kinds, began to destroy Russia. Won those who promised more. He promised and did not. They promised land, gave like, and then took. They promised equality, but in the 1 constitution, 1918 was equated with the vote of one worker to the five voices of the peasants, and only in 1936 was it equated with rights. But the CPSU (b) said that the main thing for her people. Whose people? Wasn’t the Soviet power kept with the blood of Russian peasants?

During the Great Patriotic War, especially in its initial period, the Communists realized that they could not retain power, and again turned to the people and the church. And again, thanks to the resilience of Russian peasants, I repeat, Russian peasants, since at the end of 1941, the main call was from the Russian regions (yes, Kazakhs, Uzbeks, and Azerbaijanis were called upon ... but the most resistant were Russian and Tatar ) managed to stop the Germans and turn them around. And not thanks to the CPSU (b), but thanks to simple Russian, Tatar, etc., as a rule, to the peasants, about whom the films are not made and the songs do not add up. 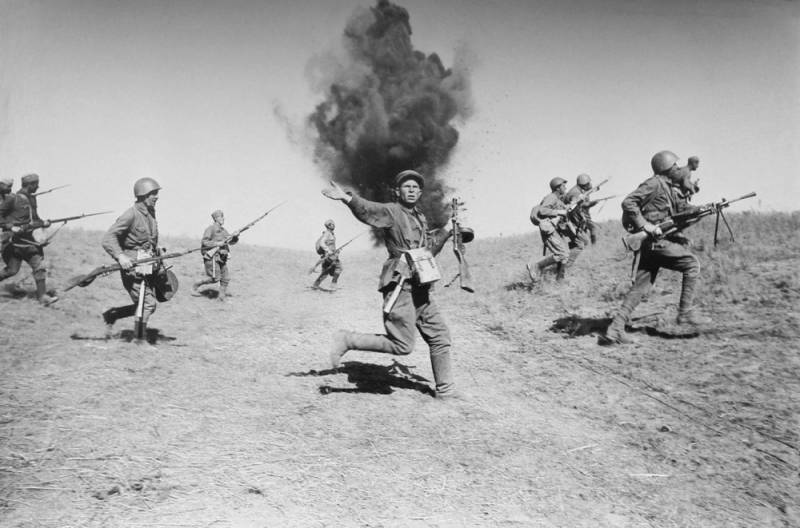 And they restored our Motherland not thanks to the CPSU congresses, but to the understanding of our people that everything must start all over again.

Our people, not the Communist Party of the Soviet Union, won the war, fought against the invaders, built, conquered, conquered and built. But as a result of the communist rule, our state lost its vast territories, which we conquered for centuries. 25 million Russian were in one moment outside their homeland and huge funds were invested in foreign countries and all thanks to the rule of the CPSU.