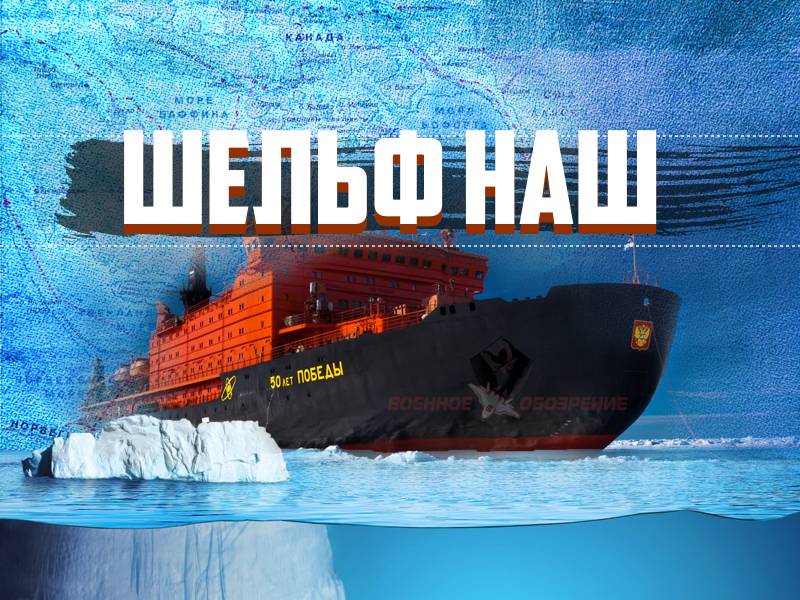 Currently, the application of our country is being discussed in the Commission on the Limits of the Continental Shelf. We are talking about the application for the expansion of the very continental shelf - in the Arctic Ocean. The commission includes more than 20 people representing various countries of the world, including those in Europe and Latin America.

Russia, on the basis of international law, claims a seabed area outside the 200-mile zone in the entire Russian polar sector with the inclusion of the North Pole zone and the southern extremity of the Gakkel ridge. This is the area of ​​the extended continental shelf in the Arctic Ocean, which is 1,2 million square kilometers.
Russia has all legal rights for this. Everything!

It should be noted that the use and development of various zones of the oceans are governed by the UN Convention on the Law of the Sea of ​​1982. To date, 155 countries are parties to the Convention, including the Russian Federation, which has ratified the Convention 20 years ago.

The United Nations Convention on the Law of the Sea has defined the continental shelf of the coastal state (hereinafter the dry and ornate language of international jurisprudence) as "The seabed and subsoil of underwater areas extending beyond the territorial sea throughout the natural extension of its land territory to the outer limit of the submarine continent or at a distance 200 nautical miles from the baselines from which the width of the territorial sea is measured when the outer boundary of the submarine continent margin does not extend to such a distance " (Section 1 Art. 76).

It is important - for those who a priori oppose the application of Russia, declaring that Russia will thus also claim "half of the Arctic Ocean with its resources": the rights of the coastal state over the continental shelf do not affect the legal status of covering waters and airspace above them. All countries have the right to lay submarine cables and pipelines on the continental shelf - regardless of whose property this shelf is. But scientific research within two hundred nautical miles on it can be conducted only with the consent of the coastal state.

In addition to Russia, there are a number of countries that claim to different parts of the Arctic Ocean bottom. These are Canada, Denmark, Norway and the USA. The interest of these countries in the northern seas is dictated by the fact that their subsoil contains astronomical mineral reserves: at least 83 billion tons of fuel equivalent (only according to general “estimates”). Of these, 80% falls on the Barents and Kara Seas. At the same time, the likelihood of discovering new large oil and gas fields in practically unexplored zones of the shelf is very high.
Russia is the first (back in 2001 year) has submitted an application to the United Nations to establish the outer limit of the continental shelf in the Arctic Ocean. Subsequently, the RF application was rejected. The experts concluded that the information provided is not sufficient to satisfy it.

In 2005-2014 Seven expeditions were carried out on the scientific vessel Akademik Fedorov, as a result of which seismic surveys were carried out, bottom sediment samples were collected from a depth of several kilometers.

Rosnedra organized a large expedition in which two icebreakers, a submarine, and special underwater vehicles participated. In the course of the research, fragments of hard rock that had broken away from the crust were raised from the bottom. They turned out to be the same age as the substance of the continent itself.

In June, 2007, a group of 50 Russian scientists returned from a six-week expedition with the news that the Lomonosov Ridge is connected to the territory of the Russian Federation, thereby supporting Russia's claims for oil and gas, with which the triangle is rich. 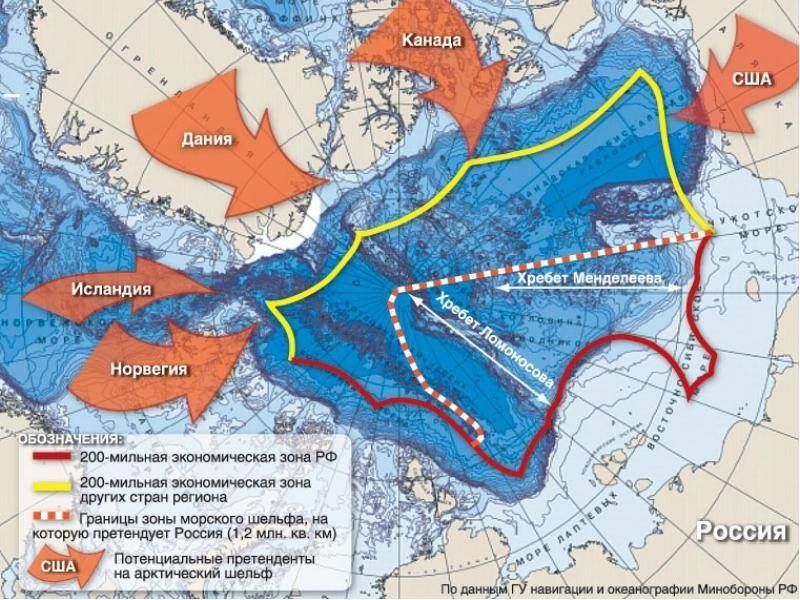 Having studied the basalts and dolerites extracted from the bottom of the northern and southern parts of the submarine range, the scientists found that they have the same nature as the ancient base of the Novosibirsk Islands, which is an integral part of the continental shelf.

As a result, a repeated Russian application for expanding its borders at the expense of the continental shelf in the Arctic Ocean was submitted to the UN in 2015 year.

The application mentions the Lomonosov Ridge, the Submariners Basin, the Mendeleev Ridge, the Chukot Basin, which are a continuation of the Siberian Continental Platform.

Trying to make up for the lost positions in the dispute over primacy to possess the Arctic territories, Norway, Denmark and Canada have so far filed their applications with the UN Commission. The United States is also preparing to send its application. And to apply, the States first need to ratify the Convention. The United States Congress, which had previously kicked it off, now suddenly realized that ratification is needed, and urgently. Discuss. Vote. But there is no hint of such large-scale studies that Russia conducted, no one who has submitted or has submitted an application to the UN.

Having considered the peculiarities of the international legal regime of the continental shelf, it can be concluded that the territorial problems associated with the maritime spaces were and continue to be among the most acute problems of international relations. This is particularly confirmed in modern conditions, when individual countries are trying to redraw the world map, and openly declare various regions of the globe, including almost all areas of the World Ocean, to be their zone of vital interests.

Today the Arctic Ocean is a free water area where any country can carry out various activities. According to the principles of the International Convention on the Law of the Sea of ​​1982, the bottom of the central part of the Arctic Ocean can be divided between the Arctic countries, and specifically Russia, Canada and Denmark.

The main argument of Russia: a significant part of the underwater territory, which our country claims to be, is a continuation of the continent, constituting a whole with it, there are no gaps filled with oceanic crust. Simply put, it is a part of the continent that, for various reasons, has sunk under the water, so the Lomonosov Ridge and the Mendeleev Ridge can be considered the territory of our continental shelf.

Of course, under international law, each of the Arctic countries has its own territorial waters in the Arctic Ocean, but, as is known, the Arctic continental shelf is the ocean floor, which is a continuation of the continent. Its length under the Convention on the Continental Shelf 1958 of the year is determined - without restrictions to the shelf of the opposite state. Therefore, putting forward their claims on the Russian shelf, Canada, Denmark, Norway and the United States, who consider themselves the main champions of democracy and the protection of the foundations of legal regulation of relations between states, are in fact violating international law.

However, I want to believe that international cooperation in the Arctic will still be based on the principles of mutual respect, taking into account the national interests of each country. That's just the fact that our "partners" are ready to take into account the interests of Russia, which, due to its unique geographical position, is an important link in ensuring the security of the Arctic region, even taking into account the fact that international law in this case is on the Russian side hard to believe. The whole main struggle for the shelf and the Arctic as a whole is still ahead.