"The greatest power of justice on Earth": this is not about Russia 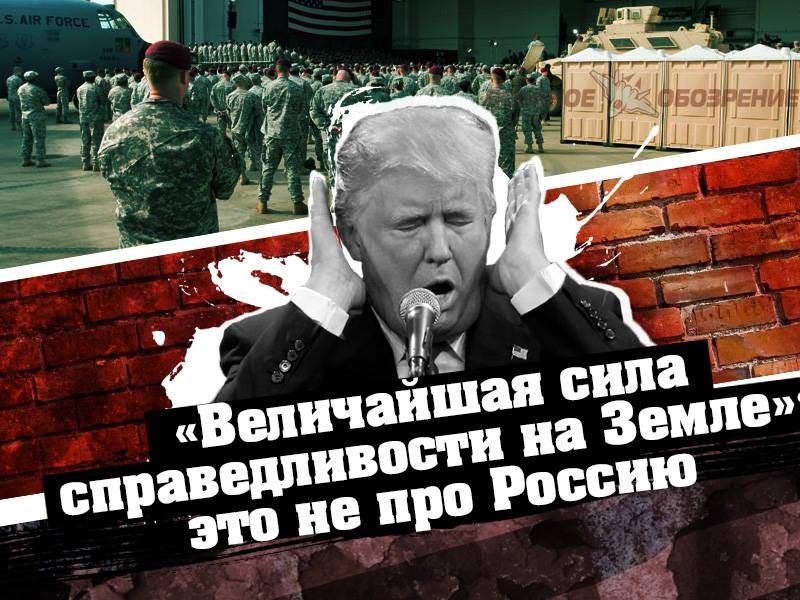 Mr. Trump believes that the U.S. Navy is something like fleet times of the First World War. The President visited a military base in Florida and promised sailors to give more ships and in general everything they need. The new owner of the United States agreed to the point that he called his native military forces "the greatest force of justice on Earth."

Speaking at the Central Command Base in Florida, Donald Trump compared the state of the American naval forces with the times of the First World War. The report with the performance of Trump is not a secret and made public on the site The White House.

Expressing gratitude "on behalf of the whole nation" to the US military serving under the command of the US Central Command (CENTCOM) and the US Special Operations Command (SOCOM), Mr. Trump personally greeted the army, marines, Navy, Air Force and Coast Guard, as well as civilian personnel whose participation is also "important for success." “We must protect our nation,” says Trump. “And we will do it, trust me.” (Applause.)

According to Mr. Trump, the US military will receive equipment, resources, and everything else necessary for service.

Trump believes that the American forces are now "exhausted": the fleet is in a state almost reminiscent of the state during that world war, which ended "a long time ago." With this state of affairs, Trump does not intend to put up.

At the same time, this does not mean that the president will start throwing money away. He guaranteed the audience that the taxpayers' money would not be wasted. “I already saved more than 700 million dollars when I participated in the negotiations on F-35. You know about this, - said Trump. “And I want to thank Lockheed Martin, and I want to thank Boeing, and I want to thank all the companies that really met.”

Further, Trump promised to take care of American veterans, to show that America always stands on the side of those who advocate for freedom, and also urged US allies to fork out for joint defense. According to him, the allies must pay a "fair share." The reduction of such a share is “injustice” in relation to the United States, the president said. “We strongly support NATO,” he said. “We only ask that all NATO members make their full and proper financial contributions to the treasury of the alliance.” Many of them do not. Many of them didn’t even come close to this, and they will have to do it now, ”the President noted.

At the end of the speech, Mr. Trump reiterated the well-known opinion about the exclusivity of the Americans, which had been replicated by Mr. Obama and his team. According to Trump, the American nation "was blessed by God." There is evidence to this: those men and women who serve in the United States military are "the greatest justice force on earth that the world has ever known."

Trump promised to defeat "radical Islamic terrorism" and not allow him to "take root" in the United States.

“Thank you,” the president said in conclusion. - God bless you, and God bless America. Thank you very much. Thank". (Applause.)

As for the problems of the fleet, the publication "Defense News" previously reported that the US Navy does not have enough funds to repair warships, but it is full of debts. The problem is the inability of Congress to adopt a budget.

Nearly two-thirds of strike fighters belonging to the US Navy cannot fly and stand on the ground. These aircraft are either undergoing maintenance, or are waiting for parts, or are still in some "queue". In general, the magazine notes, more than half of the Navy planes are idle on land. And the reason for the downtime is the lack of money for repairs.

Not enough money to repair the ships. More ships are in need of repair. Maintenance work is canceled or postponed. Commanders say that if the problem of money is not solved, five more submarines will rise soon.

The US Navy does not even have the money to pay for the travel of military personnel and their family members who have received new appointments. Moreover, the government owed the seamen about $ 440 million.

15% coastal objects of the Navy are in poor condition.

The grim picture presented by the Navy leaders contrasts sharply with the vigorous statements made by the Trump administration regarding "naval growth." Talk about building dozens of new ships is good for newspaper headlines, but “it’s not at all clear when and how Congress will repeal the Budget Control Act, namely the sequestration, which, if not weakened, will continue until the 2021 of the year,” the publication indicates.

Even if the budget "ceiling" increases, then according to the chiefs of the Navy, the money should go to the required fleet maintenance, and not to build new ships. A spokesman for the naval forces said that fleet priorities are "unequivocally focused on readiness" and not on "new starts."

It seems that Mr. Trump’s programs for the revival of the “greatest justice force on Earth” are just an ordinary propaganda pshik. As is customary in many of the current "leaders of states", speeches are ahead And even the leaders of the Navy (the most competent people) doubt that Trump's projects will lead to any positive result.

If there is no money even for payments to soldiers, then where will the funds for the construction of dozens of new ships come from? Probably, Trump intends to do according to the project of S. Yu. Glazyev: print more money and invest it in the industry.