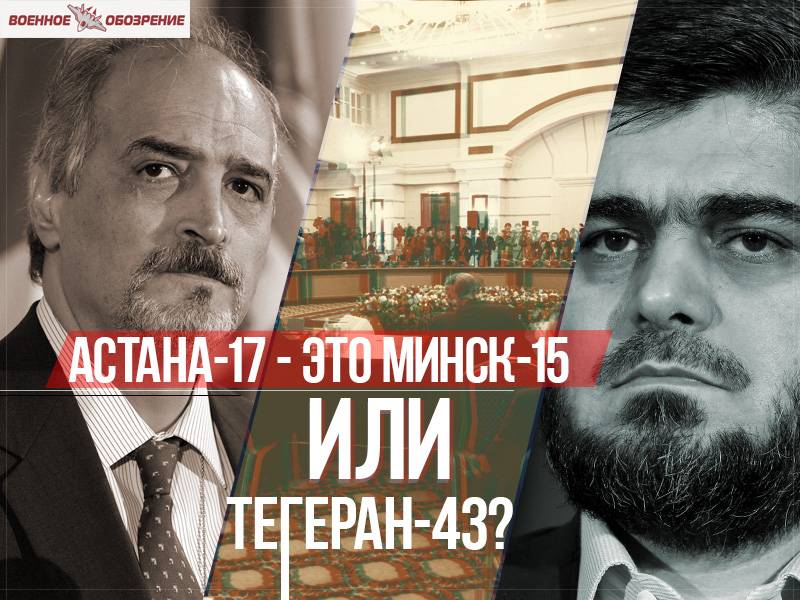 On the eve of a meeting in Astana, representatives of the official authorities of the Syrian Arab Republic with the so-called "opposition" began. The main objective of the negotiations is to achieve overcoming differences between the opposition and official Damascus to eliminate the terrorist groups recognized as such by the UN Security Council, and then begin the process of political settlement in the country. Recall that earlier the Syrian authorities stated that in order to resolve the conflict they are ready to go to one of the opposition’s demands - to hold a referendum on constitutional changes, namely, on the introduction of a multiparty system. This issue is on the agenda for discussion in the Kazakh capital.

Official Damascus is represented in Astana by a delegation led by the Permanent Representative of Syria to the UN, Bashar Jafari. The “opposition” side, which already includes 15 of various groups, is headed by one of the representatives of “Jaish al-Islam” Mohammed Alushem.

The negotiations themselves are held behind closed doors - for hundreds of journalists from different countries of the world, including Arab and Western countries, the doors of the meeting room remained virtually closed during the first stage of discussions. Only thanks to the work of the representatives of the press services of the delegations, information about the progress of the negotiation process came to the Kazmedia center, from where it spread throughout the world.

What attracted attention at the first stage of the discussion was that for the first time since the beginning of the conflict in Syria, official representatives of the Syrian authorities and the Syrian opposition appeared at the round table. Previously, those who call themselves “oppositionists” constantly arranged demarches about their participation in the discussion of the settlement process. Thus, none of the meetings in Geneva was ever held, while at the same time discussing at the same table acute Syrian issues by the members of the Damascus delegation and the “oppositionists”. As a result, the Geneva format turned into a farce, and did not lead to any positive results.

Geneva format, which tried to steer the United States, as well as Qatar and Saudi Arabia, January 23 2017 year was replaced by Astana format. Not that it is finally replaced - just another proposal from the Russian Federation, Turkey and Iran. And here it should be noted another important detail. For the first time in many years, representatives of the aforementioned Iran and Turkey appeared at the same table. Previously, it was difficult to imagine that the situation when the discussion of a particular issue is conducted by representatives of Tehran and Ankara is generally possible. The site in Astana showed that there is nothing impossible in the modern world.

The mediators in the dialogue between Damascus and the “opposition” (Russia, Turkey and Iran), who not only the mediators, but also the guarantor countries of the truce in the SAR, not only sat at the same table, but also prepared an important document called the final draft communique What is in the document? And in the document, the agreements that all three states, firstly, support the disengagement of the armed opposition from terrorist groups recognized as such by the UN Security Council, secondly, are working on plans to jointly fight Dzhebhat al-Nusroy and the IG ( banned in the Russian Federation).

Naturally, the implementation of these plans, by definition, cannot do without the participation of official Damascus, namely the Syrian armed forces. Thus, Turkey, whose authorities have only recently exploited the terminology "Assad must leave," today de facto recognize both Assad and the government army. Moreover, Turkey recognizes Iranian interests. But the medal has a downside: Ankara would never have done anything like it if all the other participants in the negotiation process did not recognize Turkish interests in the region. What are the interests in this case?

If you “dissect” all the recent actions of Turkey in Syria, you can draw the following conclusions. To begin with, Turkey wants to receive, as she herself claims, a “security belt” in the north of the SAR. De facto, this territory, which ultimately turns out to be the zone of the strongest influence of Ankara, taking into account its support of the Syrian Turkomans. In parallel with this, Turkey is going to resolve, well, its very Kurdish question. Under loud statements about the fight against the so-called "Islamic state", Turkey will settle scores with the Syrian Kurdish armed formations, which, with the weakening of Ankara, could easily cross the border of Turkey and under the slogan "Freedom and independence of Kurdistan!" .

But here the interests of Iran and Turkey overlap. After all, Kurdistan occupies a part of Iranian territory. In this country, every tenth - Kurd. That is, Kurds at least 7,5 million is also an impressive force that could “ask questions” to official Tehran if something had grown together with the independence or autonomy of Turkish Kurds with the support of Syrian Kurds. Moreover, all of this is taking place against the backdrop of the virtually designated sovereignty of Iraqi Kurdistan from Baghdad. The only thing that unites Baghdad and Erbil today is a map of the world and a joint operation against ISIS. Otherwise, these are actually two different states, or, at best, for the territorial integrity of Iraq - a confederation.

Does Turkish interests end there? Not at all. Their next “package” is related to the interests of those whom Ankara and promoted with the words “Assad must leave” earlier — that is, various groups, including “Jaish al-Islam”. For obvious reasons, the same “Josh ...” today has no “military” chances to win a political place in the sun of Syria. There is no chance to win it under the current Syrian constitution. Therefore, the Turkish puppeteers of “Jash” and other “moderates”, as it were, through negotiations, do everything so that the “moderates” simply do not roll into the sand and concrete crumb after all their “democratic successes” in Syria. If the same “Jaish al-Islam” by means of changes in the constitution, hypothetically adopted at the hypothetical referendum, can enter the Syrian parliament, then for Turkey it is another lever of political influence in the neighboring country.

In other words, all parties, including Damascus, have an interest in the negotiation process in Astana. Damascus, blood from the nose, you need to release power on at least one front, which means you will have to sit face to face with all sorts of “Jaish”, just to gather strength and destroy odious or possessed from “Al-Nusra” and ISIS. Will those who are represented at the talks in Astana from the "opposition" fight these terrorist groups? - frankly, the probability is small. But for Damascus, the main thing is not even that. The main thing is not to beat on the sly against the background of the agreements on the cease-fire.

And what about the interests of Russia? Everything is very clear here - Russia, in any case, has consolidated its position in the Middle East. And if you can achieve at least half of the goals that were set before the start of the Astana discussions, then this is a huge success. Putting Turkey and Iran on one side, plus making the West understand that its influence in this case is scanty, leave legitimate power in Syria and open the way for the political process - everything is great. True, it will be very difficult to retain the guarantee burden. "Moderate" can quickly "reorient" other forces - those who do not participate in Astana meetings. Although with Qatar now, it’s kind of like, Rosneft started working hard - it has sold the share package to the Qatar fund. And such transactions are just not carried out.

In general, the risks are great anyway. And if so, then Astana may well turn into an option of “Minsk” when there are agreements, but at least one of the parties considers that they themselves have the right to exempt them ...