January 20 2017
28
It starts on January 20, on the day of the inauguration of US President Donald Trump. Trump himself called January 20 and the days around him "great", and in this he is absolutely right. Trump’s entry into the US Presidential Olympus is unprecedented in scale of harassment and defamation, which the American “global media” and the establishment, calling themselves “liberal-democratic”, attacked him. 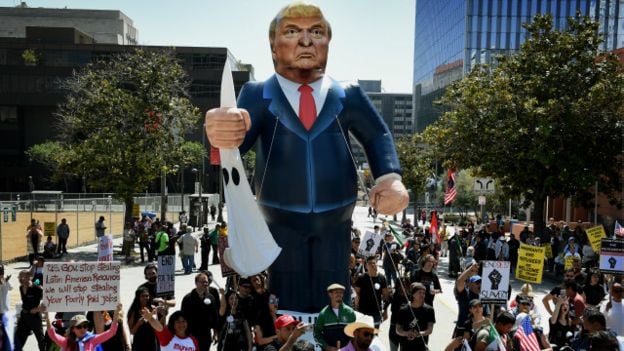 Liberal observers predict Trump a difficult and short presidential fate, which will be cut short by either impeachment or история Like what happened in Dallas with President Kennedy, with a fatal outcome. Because the liberal-democratic press will continue its pressure on Trump, and the fearless billionaire will not be able to withstand it for long.

The stupidity or deliberate deception of the observers broadcasting about this is striking: they certainly represent Trump as a lonely “extra-systemic” troublemaker who decided to make a sort of show: to challenge the “high society” who was just lucky to be lucky in the presidential race. Recall, Trump in his campaign speeches called the Washington high society "swamp", and promised to drain it.

In the life of the president, everything can be even an assassination attempt, but Donald Trump did not accidentally become the president of the United States: in principle, such things do not happen. In addition to simple one-story America, a significant part of large American business, military and special services acted on Trump's side, the FBI played an especially important role, and managed, in general, to neutralize the CIA's anti-tramp efforts.

Rather, Trump is a representative of these significant American circles: without a decisive struggle “for Trump” of his obvious and secret supporters, the victory of Donald Trump would have been impossible. The fact that Obama and Clinton immediately after the election of 8 in November recognized Trump's victory, in fact, betraying their heated “activists,” speaks about a simple thing - they had no other choice.

Obviously, the formed Trump elite group will protect it in the future, and President Trump will represent its interests. These interests are different from “world liberal values”, they are formulated differently: “America first!” In other words, there was a clash of interests within the American elites, and this is an unprecedented event in modern American and world history. Contradictions that have accumulated in the United States during the domination of the "Washington swamp", neocon liberals and world revolutionaries who sacrificed America's interests for the victory of "democracy on a global scale", as well as the global financial backstage, reached such urgency that they split American society and the advent of Donald Trump is evidence and result of this split.

20 January with the inauguration of President Donald Trump, the United States will move to a qualitatively different state - a divided and outraged society. Trump's presidential campaign, one might say, woke America. Further, with or without Trump, the era of liberation from the liberal ideology of “world democracy”, which he opened, will continue.

“We want to see a rebellion boiling in this city and across the country,” said David Thurston, one of the activists of the January Breaking 20 movement! This is unlikely ... He can see a completely different picture after January 20: Trump has already announced investigation of hacker attacks, and the results of this investigation, and other similar investigations, can so warm up the “Washington swamp” that it boils and boils away.

John Brennan, the outgoing director of the CIA, apparently, the main organizer of the “leaks of information from the special services” discrediting Trump, advised the president (!) Trump to “follow the language” ... Probably, this “language”: “I consider it dishonest that the special services allowed disclosure information that turned out to be fiction. I say that they would have done the same in Nazi Germany ... ”Not only in Nazi Germany. Brennan, for thirty years of his service in the CIA, did so in organizing color revolutions around the world, making foreign leaders "bloody villains", and simply transferred this experience to America.

Brennan, and his activists, must answer for this to President Trump, and his comrades-in-arms, Trump has no other choice: either Brennans will arrange a color revolution in America, or the American Trump will crush them.

What happened in America? .. Vague and false "liberal democratic values", self-justifying all their sins "liberal world democracy", developed to the values ​​of Sodom and Gomorra, caused anger and outrage in American society, which Donald Trump expressed. This is not only American, but also the world trend, which is represented on the other side of the world by Russian President Vladimir Putin.

Therefore, it is not by chance that the liberal world propaganda puts Trump and Putin alongside, and poisons both. Justifying this with higher considerations, the notorious revolutionary expediency, this time of “liberal-democratic”, there is supposedly no other alternative. It's a lie.