As the nation disappears. Secrets of degenerative diplomacy 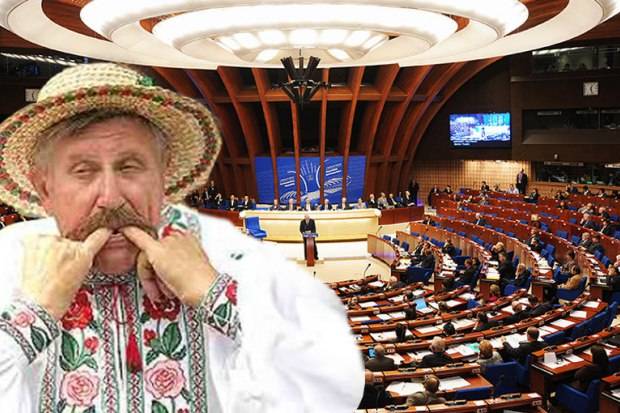 Kiev again beats in hysterics. This phrase has long been a kind of slogan for both the foreign and domestic policies of the Poroshenko team, and the whole situation in Ukraine as a whole. The crazy patriotic booth in almost Europe has been going on for the third year in a row and the deeper the country sinks into the swamp, the higher the level of absurdity and insanity of its rulers.

But no matter how idiotic many (yes almost all) decisions of the Kiev elite look, a certain amount of cruel and cynical logic is still present in daily jumps.

I would like to leave a couple of comments about the latest “demographic panic” in Kiev and try to link it with the “ingenious strategic steps” of Kiev diplomats on the foreign policy front.

As it is known, many overly authorized metropolitan balabols and yesterday's racers of Maidan raised an impressive information wave about the critical depopulation of Ukraine. Roughly speaking, the country is rapidly dying out, and its immediate killers are plaintively squealing about a serious leak of a living resource.

The first violin was “pulled” by the notorious Borislav Bereza, the former leader of the “Right Sector” (banned in the Russian Federation), and now the people's deputy and the same ardent nationalist and extremist. A clown with a swastika instead of a red nose indignantly lamented the catastrophically high level of emigration and cited the burning history with a teenager, met in a cafe, who seriously and convincingly persuaded his mother to move to Poland.

For Ukraine has no future. Birch raised a serious high on social networks, fearingly declaring that with such sentiments of recent revolutionaries, soon there will simply be no one to feed the country, as ever more or less adequate population dumps abroad with amazing speed in search of a better life.

Aria “What shall we do now for the poor” was continued in the Cabinet of Ministers. Mr. Groysman in his report on the work of the government only casually complained about the exodus of the most likely wrong patriots, but he angrily promised to eliminate total unemployment in the country, destroying the parasites themselves (some kind of Vinnitsa Hitler in miniature). But his subordinate, Minister of Social Policy, Andrei Reva, after the boss’s speech, already described in more detail the problem of mass emigration and the actual destruction of thousands of jobs.

Ruslan Bortnik, a more or less adequate expert, director of the Ukrainian Institute for Policy Analysis and Management, put a bold point in the demographic question during his press conference in Kiev. The political scientist reminded the audience that only last year more than a million people left Ukraine and the rapid depopulation is growing exponentially. Now, according to a special UN commission, the country is losing 80 people per hour. In this regard, the “prosperous” state of Poroshenko has long surpassed even the warring Syria and some endangered African countries.

Such statements often shake the Ukrainian air and surprise no one. Just recently, isolated attacks merge into a many-voiced chorus and, instead of anger, they transmit more and more fear and outright panic. The revolutionaries lose their seemingly qualitatively bridled slaves and howl at the moon in impotent rage.

And on this very background, Kiev’s completely idiotic diplomacy is acquiring new colors. The crazy idea with the visa regime with Russia has been discussed for the third year already and is not only a geek of official nationalist propaganda, but also a tool for preventing a demographic catastrophe.

According to official data, one and a half million Ukrainians have already left the Russian Federation, while the real figures are three times larger and mercilessly beat the ambition of the reformers that are running around. Poroshenko, on the one hand, wants to close another loophole for his citizens, but he cannot physically do this, for millions of rubles earned by migrants somehow support the dying economy and replenish his own pocket.

The fact that Kiev politicians cannot afford to do on the eastern border for many reasons, they do great in the West. And in this "operation" it does not smell like propaganda. Diplomats of “Square” systematically pursue a policy of isolation with the European Union, hiding behind idiotic slogans and ultimately starting from the opposite. Although the logic in this behavior is also seen only up to a certain point. Why so hard to spoil relations with the same Poland, if a little more than a million Ukrainians regularly send zloty home?

After all, only in 2016, the year Klimkin and the company managed to put a fat pig on their own breadwinners to migrant workers, all because of the same Nazi ideology. The reformers dug up to the point that Ukrainian migrants gently survive from Poland with the help of European Parliament bills and 2017 might be the last for many hard workers abroad. So does Kiev with all European partners and frankly climbs on the rampage.

One has only to recall the recent excesses with the potential French President Marine Le Pen, or even any scandal with European deputies visiting the Crimea. After all, each of his scream and idiotic demarche Poroshenko’s toy diplomats close another loophole for their fugitives. Not right now, so in perspective. And they cover up all their truly isolationist inadequate tales of the visa-free regime, in which no one on Bankova initially never believed, using the European dream as a tasty bait for an obedient herd.

In such a behavior of supposedly mediocre diplomats, one can see some evil logic of the dictator of the slave owner. In order to stop the flow of fugitives, Poroshenko gradually closes Europe for them and also aggravates the situation with Russia. 2017 year will be extremely critical for the regime, and in an attempt to keep power in their hands, the Kiev elite can decide on martial law or on the same visa regime with the Russian Federation. Then the last saving door will be shut before the Ukrainians, and the country will turn into a real concentration camp.

The Ukrainian nation, about which patriotic populists perpetrate it so much, has not passed the test of time and is beating in its death agony, rapidly falling apart. In appearance, degenerative diplomacy is trying to prolong the existence of the originally stillborn project for the sake of full-fledged saturation.