Fear of the dollar, the power of the bringer: the history of the printing press 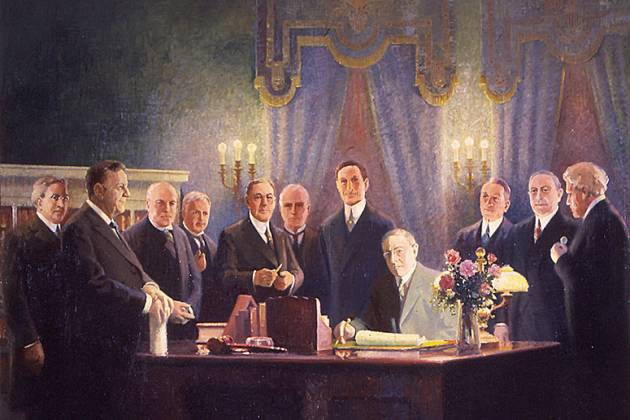 More than a century ago, the first in the United States was created stories centralized financial regulator printing dollars. Until December 1913, the US Congress several times rejected projects by central banks, while maintaining the Treasury's monopoly on currency issuance. The first attempt belongs to Treasury Secretary Alexander Hamilton, who in 1791 proposed to create the First Bank of the United States (First Bank of the United States) with headquarters in Philadelphia, the project of which was finally rejected by parliamentarians twenty years later. 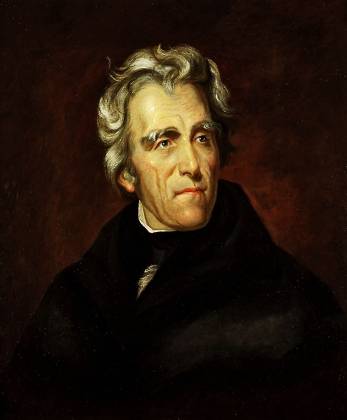 In 1816, Congress agreed to the Second Bank of the United States (Second Bank of the United States), but with election (in 1828) to the presidency of Andrew Jackson, the executive began to sabotage the project, which was denied prolongation by 1836. Since then, America has learned to live in a “free banking” environment, which has been based on a consensus between the White House and the state authorities. Civil War 1861 − 1865 debunked the cult of "decentralization", as the financial institutions of the North and the South set out to competitively print currency, stimulating hyperinflation and impoverishment of broad sections of the population. War demanded costs. As a result of the bloody conflict, the United States was dominated by industrialization, which was accompanied by the desire of European (British) capital to receive high rents from the restoration of infrastructure.

At the end of the 19th century, American financial and industrial capital was experiencing an unprecedented rise, colliding with its rivals from the UK in different parts of the world. Standard Oil, Royal Dutch Shell and Anglo-Persian Oil Company confront each other in the fight for the European market and Asia, challenging dominion over hydrocarbon deposits in the Russian Empire, Persia and the Ottoman Empire, which, with the support of Deutsche Bank, is building the Baghdad railway in the hope cut off British trade with China and India.

The Old World has been weakened by the 1873-1896 Long Depression, which has weakened London to a greater extent by swearing allegiance to the free trade doctrine. Moreover, by London's 1914, the “oil pearl” of London, the Anglo-Persian Oil Company, is on the verge of collapse. “Despite a promising start, the Anglo-Persian Oil Company was on the verge of bankruptcy in 1914. Possessing significant oil reserves, the company experienced difficulties with sales: cars were considered luxury at that time, the fuel market was in its infancy, and the industrial oil market was already divided between European and American companies, ”the press service of BP clarifies. Who knows what the history of the company and the British oil industry would have been if it had not been for its nationalization and the First World War?

In the global economy, the Interregna period begins when the universal money-commodity-money capital formula, proposed by Karl Marx, gets rid of the commodity-money-commodity phase, thereby devaluing the need to capitalize and invest in tangible industrial assets. . Money becomes a self-sufficient and independent force, focused on more efficient sources of profit. It is no coincidence that by 1908, self-taught inventor Henry Ford will create the first conveyor production in history.

However, there is a small snag - there is no central bank in the United States at the beginning of the 20th century. For comparison: the bankers of Genoa created the first financial regulator in history (“Casa di San Giorgio”) back in the 1407 year, in the 1587 year they were followed by competitors from Venice, and already in 1609, the masters of the intermediary trade, the Dutch, Bank of Amsterdam, which allows them to confront the Spanish-Austrian Hapsburg; The Netherlands monopoly continued until the end of the century - in 1694, the British created the Bank of England, which until the beginning of World War I would dominate the world of finance. This is the longest monetary monopoly in the history of the New Time. American bankers will do everything to overcome it. 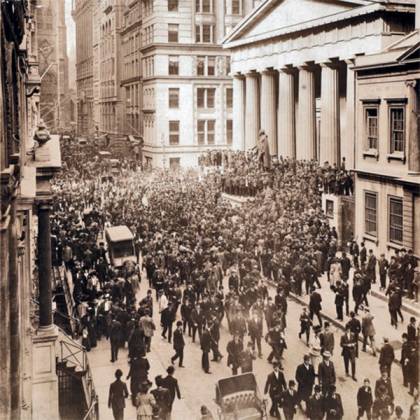 How to prevent panic

October 1907 of the year entered US economic history as a period of banking panic. The bankruptcy of the monopolist copper industry, the United Copper Company and its lender, the Knickerbocker Trust Company, the third-largest bank on Wall Street, sparked the 50% stock crash on the New York Stock Exchange. John Pierpont Morgan intervenes in the case, who buys up shares and opens credit lines, agitating his financial colleagues to act in a similar way to “support the market” with additional liquidity. But the situation continues to derail. So just need. In 1908, Republican Senator Nelson Aldrich creates a bipartisan commission to investigate the October Panic (the National Monetary Commission), which is adopted to draft a law on the US Federal Reserve. Heads of Wall Street were convinced that the cause of the crisis lies in the absence of a central currency regulator, which in such cases should flood the market with additional money supply. 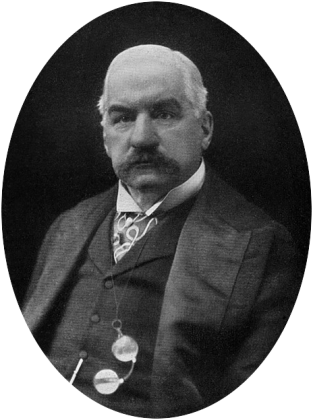 The first step is to study the experience of European countries, where Senator Aldrich is sent to meet with Paul Warburg, a representative of the largest German investment bank Kuhn, Loeb & Co. Behind Aldrich's back is not only business ties with the banking houses of the Morgan and Rockefellers, but also family ties: his daughter married John Rockefeller Jr. This is how the new financial aristocracy of America was formed, which will openly come to power during the presidency of Gerald Ford (1974-1977). We are talking about Aldrich's grandson - US Vice President Nelson Rockefeller (1974-1977). But that will come after. In the meantime, let's go back to 1910. Bankers, led by Aldrich, are holding a secret meeting on Jekyll Island, Georgia, to discuss the structure of the future central bank. "The issue of the principles for setting the flat interest rate was resolved during the meeting on Jekyll Island," Warburg said following the meeting, which was also attended by the head of the Rockefeller National City Bank of New York Frank Vanderlip, JP Morgan Senior Partner Henry Davison, President of First National Bank of New York Charles Norton, Assistant Secretary of the Treasury Piatt Andrew, and Adviser to the President of the United States Edward House. Warburg proposed the Reichsbank as a role model, which had both regulatory and supervisory powers over the banking system. “None of the participants in the meeting felt like a conspirator. On the contrary, we felt involved in patriotic work, trying to plan a mechanism that would correct the shortcomings of our banking system that manifested themselves during the panic of 1907. The outcome of our meeting was a project to create the US Federal Reserve System, ”Vanderlip writes in his memoirs, which were published in 1935 (“ From Farmboy to Financier ”). 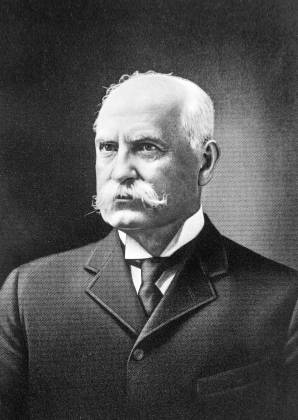 Aldrich presented his plan in January 1911. Nevertheless, Congress received a document for consideration only in 1912, where members of the US Democratic Party, who controlled both houses of parliament, came out against it, trying to give the law greater decentralization. The leader of this wing of the political elite - Congressman from Minnesota, Charles Lindbergh. “Aldrich's plan was created on Wall Street. Its implementation will lead to another panic, the purpose of which is to intimidate people. Instead of representing the interests of the people, Aldrich, whose work is paid for by the government, acts in the interests of the large trusts, "Lindberg said, arguing that" the adoption of the Fed law by the US president will strengthen the position of exclusively monetary authorities. " As for the authors of the initiative, they built a centralized structure, flirting with the supporters of decentralization. As a result, a system based on a network of 12 regional banks (Boston, New York, Philadelphia, Cleveland, Richmond, St. Louis, Atlanta, Chicago, Minneapolis, Kansas City, Dallas and San Francisco) with the largest branch in new york and headquarters in washington. The governing body is the Board of Governors, whose members are approved by the President and the Senate for 14 years without the right to extend authority. 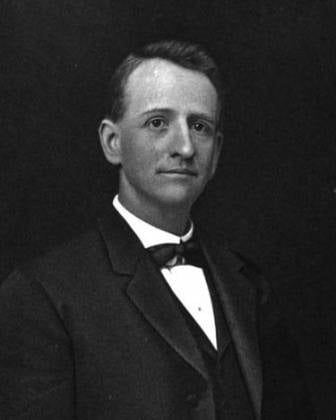 “By 1913, the preamble to the law had three goals: to flood the market with elastic currency, to support the securities market in such a way as to provide banks with liquidity, and to improve bank supervision,” said New York Times columnist Roger Levenshtein. According to him, “few people then assumed that the Fed would be so important to the economy, although the regulator assumed control of the discount rate”; "In particular, Congressman Carter Glass promised that the Fed would be limited to the gold standard." 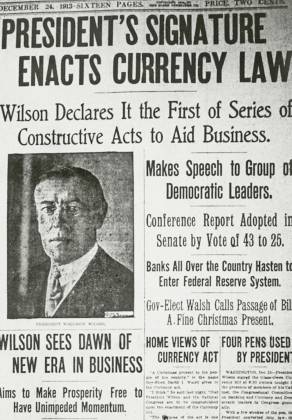 22 December 1913, the Fed law was passed by an overwhelming majority of Congress - 298 vs. 60. President Woodrow Wilson approved the document the next day. Banker Benjamin Strong, who took office on October 5 of the year 1914, became the first manager of the Federal Reserve in New York. He will rule the American regulator as long as 14 years, until his death 16 December 1928 year. In a year, the United States and the rest of the world will witness the biggest financial collapse of the 20th century - the Great Depression, which will happen again in the 21st century. 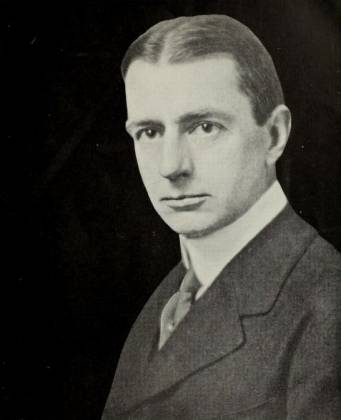 The Fed provided Wall Street with unlimited credit, which at different periods of American history was used to support the economic growth and fighting efficiency of the Pentagon, uniting the national states with invisible exchange threads. 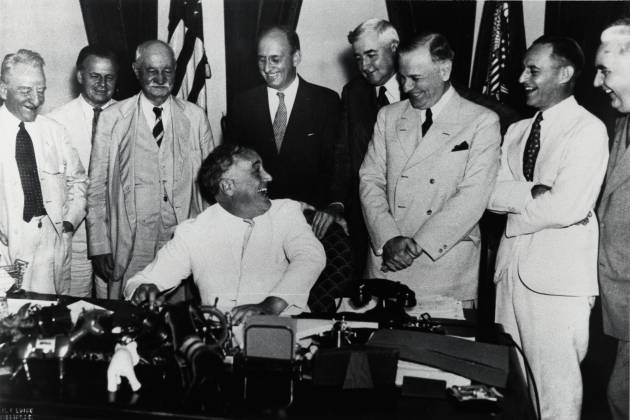