Steel Queen dogs in the Syrian sands. Assad is waiting for the fate of Gaddafi? 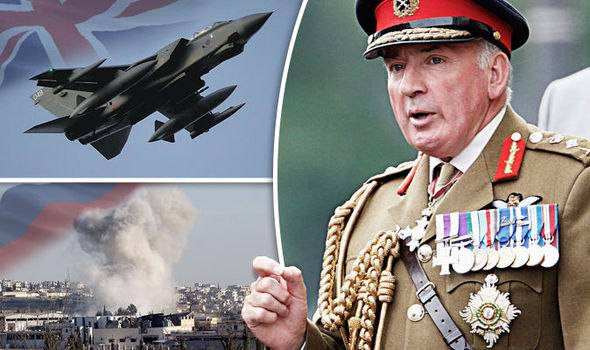 Exemption from Aleppo IG militants and their immediate colleagues from the so-called moderate opposition, in the literal sense of the word put on the ears of the entire Western world.

Major players of the Syrian party of anti-terrorist coalition so perenervnichal that went on to frank the risk by staging a hasty transfer of militants and a large-scale attack in Palmyra. We can not of course with full confidence that it is the United States directly with European allies organized a special march throw IG under the cover of a dust storm and the subsequent capture of Palmyra.

But there are too many coincidences and inconsistencies in the "testimony" of true democrats. Be that as it may, the American units most likely simply let a man under Raqa and Deir-ez-zor shade their eyes at the right moment to slip past the almost inconspicuous grouping into 4000. Oh, the Yankees in this trick have always been unsurpassed masters.

As they say, all that was, then passed, and now it is clearly too late to wave their fists and pour groundless accusations. Asad won a serious victory after all, and even possibly turned the tide of the war. After all, Aleppo is indeed a kind of cornerstone of the Syrian state. It is now interesting to observe the consequences of this victory, and to try, without going into insanity, to predict further events. Although already this one smacks of frank insanity. The conflict in Syria is, for the most part, a completely unpredictable chaos, often incapable of logical analysis. How, in general, and any civil war.

The more in this conflict, outside stakeholders, the greater the probability of developments lines. In this case it is better to observe the directors most tragic acts of Syrian performance.

In this case, I want to talk about the UK. Moreover, London provided an excellent reason for reasoning on the topic, sending its "legionaries" to pacify the disobedient, but still tame opposition. As you know, messengers of the Queen arrived in Syria - 20 British military advisers. Their main goal is supposedly capturing their many wards from a wide variety of groups, united by the rather slippery term “moderate opposition”.

That is, in fact, the British came to the new gathering and rally to scatter the flock that they are still five years ago was prepared to overthrow the Assad regime objectionable, back into operation and to send all in the same direction. That is to say against the government troops.

Great Britain never hid its intentions and used the same methods here in Syria back in the 1922 year, after the League of Nations divided the Ottoman Empire and divided it between France and England. After the 20 years of interim struggle, the same advisers forced the Syrians to throw off the “French yoke” in 1945, so that after three years they would be squeezed by their protectorate. This game has many centuries, changing only the scenery and the society itself. But that's not the point.

The brave soldiers of the Queen of England, who almost a hundred years ago in the same places were called the steel dogs of the desert, arrived at the place with a completely transparent task - to form a new backbone of resistance. It would seem that everything is as usual, the empire weaves intrigues under the guise of the UN, hundreds of international organizations are smaller (forgive me for exaggerating). The high position of the guests is disturbing in this visit.

The Minister of Defence, Michael Fallon, said that the group comes instructors to train the rebels to renewed struggle with LIH. A minimum of facts and no specifics. But in the digital age it is difficult to conceal any information and in the media throughout the day, citing a source in the Ministry of Defense reported that the seconded occupy very high positions. The group even wormed a brigadier general with unlimited powers.

It turns out that London sent large lumps in a raid on the mountains and dunes to catch the surviving leaders of the so-called resistance. Somehow it does not converge. If we recall the long-established scheme of implementation and further work of military advisers of the West, the situation already looks doubly suspicious.

In any of the conflicts of the twentieth century, even the US and Britain adhered to rigorous (one they know why) traditions. First in the country selected victim, come agents of influence who are using low-ranking diplomats sway domestic politics and create ideal conditions for the crisis and the subsequent explosion. A little later, somewhere in the midst of the fighting has come officers, staff officers and even sometimes more or less large bumps.

At the end of the operation (conflict, war), the crown sends either a sweep group to conceal, if possible, too obvious traces of its participation in crimes, or a new crowd of officials in case of success and victory of the desired candidate. Very rarely, usually in some unusual situation, London can send a group of high-ranking specialists to prepare a counterattack and win at any cost. Something similar happened in Libya 5 years ago. After numerous unsuccessful attempts to remove Gaddafi by available methods, Britain went all-in and sent serious specialists to Tripoli, violating the UN resolution.

By the way, somewhere at the same time in the late spring of 2011, their less important compatriots just started working in training camps on the border of Syria, preparing the “Djebhat al-Nusra” and “Ahrar al-Sham” units for an early war. Here is such a symbolism. As you know, less than six months later, an angry and pre-prepared crowd tore up Muammar Gaddafi. Of course, it is impossible to insist on the involvement of the English group in this clearly planned murder, without having any serious evidence, but the coincidences are too obvious.

Again, I do not presume to say that Britain has decided to resort to extreme measures in its war against Bashar al-Assad, but the moment, in theory, the most that neither is appropriate. Western partners in the antiterrorist coalition got into a trap of Aleppo, and were at an impasse. The failed EU sanctions an attack directed against the Russian Federation, clearly demonstrated the helplessness allies patrons IG.

Washington is rapidly losing its position on the Syrian front, the UK flying into the same abyss. Loud and desirable public killing of al-Assad may be the only way out of this situation and will not allow to escape the conflict in the wrong direction. In any case, the White House and Westminster gladly resort to the favorite way of solving complex problems, just to correct the situation and to subordinate finally Syria.

Big wins often generate monsters, and Assad would be better to just think about their tactics in the new game.