Ministry of Defense of the Russian Federation: Militants of illegal armed formations are knocked out from all quarters of Aleppo

December 15 2016
89
The Deputy Chief of the Main Operations Directorate of the General Staff of the Armed Forces of the Russian Federation, Lieutenant General Viktor Poznikhir, reports that militants from various illegal armed formations have been knocked out from all quarters of Aleppo. According to the Russian general, only lately about 3 thousand militants have left the southeastern quarters of the largest Syrian city. The statement of Victor Poznihir leads TASS:
As a result of offensive actions, the militants are driven out of all the quarters under their control. During the fighting, the Syrian army eliminated more than 900 terrorists, destroyed dozens of heavy weapons and military equipment.


More than 4 people have now been transported through a specially created humanitarian corridor from Salah al-Din in the direction of the settlement of Rashidin-1000. For this, 20 passenger buses provided by the Syrian authorities and 10 ambulances from the Red Crescent are involved. 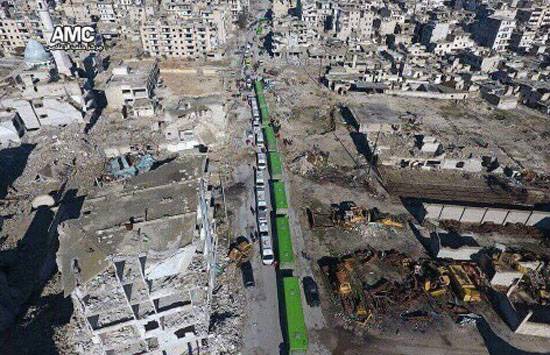 In the Russian General Staff, the Armed Forces report that local governments will begin to form in the liberated quarters of Aleppo, which will make it possible to quickly return the city, which suffered during the terrorist occupation, to a peaceful life.
Ctrl Enter
Noticed oshЫbku Highlight text and press. Ctrl + Enter
Military Reviewin Yandex News
Military Reviewin Yandex Zen
89 comments
Ad