And what is wrong Mikhalkov?

December 14 2016
120
Since last week, the Russian neoliberal environment has fallen into a state of turbulence, “as if” having familiarized itself with the speech of Nikita Mikhalkov, delivered to representatives of the Federation Council. This speech was devoted to the problems of the notorious Yeltsin-era museum operating in Yekaterinburg. This is the same Yeltsin-center, about which Mikhalkov thought repeatedly in his programs (Besogon).


At the same time, the word “problems” used here is not quite correct. The fact is that the Yeltsin Center representatives themselves and the main ideologists of its exposition and multimedia "chips" do not see any problems. And when Mikhalkov spoke about the existence of problems, his speech by neoliberals was perceived with hostility. Like, how dare you try to encroach on our “charm” (an article on this topic based on Mikhalkov's Besogon, by the way, has already been published on the pages of “VO”), and how can you, Boris Nikolayevich, be criticized in general?

In general, she found a scythe on a stone. But the sparks flew not so much because of the statement of Mikhalkov himself, so much after numerous publications in the media, who salted and peppered Mikhalkov's words so that little remained of their original version. Some of the particularly vigilant Cerberus of liberalism reported to the widow of the first President of the Russian Federation, Naina Yeltsina. Like, and Nikita, your Mikhalkov Boris, something of your Nikolayevich will be watered with mud, requires a broom to walk around the Yeltsin Center ...

Naina Yeltsin, who did not see Mikhalkov’s own speeches in the deliberative hall of the upper chamber of the Russian parliament, but made her conclusions on the encirclement of the entourage, accused Mikhalkov of almost treason. Here are some excerpts from a letter from the widow of Boris Yeltsin (quote RBC):

I am deeply outraged by these statements Mikhalkov. And not only because they are deceitful, having no relation either to the Yeltsin Center or to its activities. It’s amazing that for several months now he has been spreading lies about how история countries in the museum of the first president of Russia, do not hesitate to pull out the elements of the exposition from the context, label and directly insult people who in those years worked for the good of our country. Mikhalkov was never in the Yeltsin Center. It does not fit in my head. How can you criticize what you did not see?

And this photo, published on the website of the Yeltsin Center itself, is supposed to be you, Nikita Mikhalkov ... 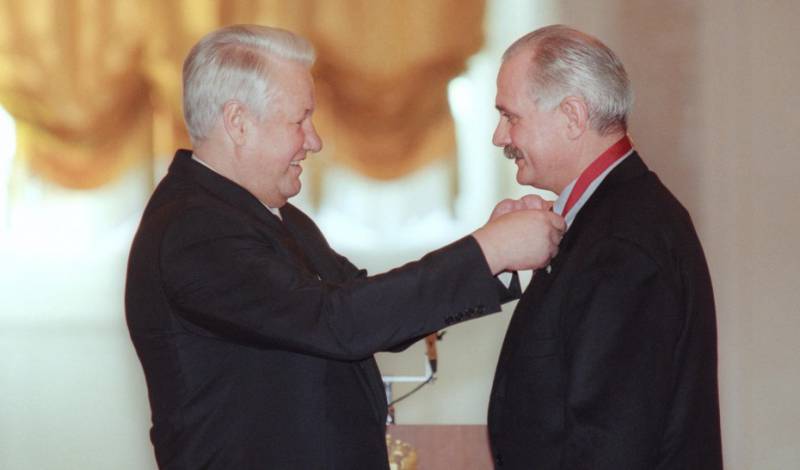 Before publishing the response of Nikita Mikhalkov, who is now often accused of “adaptation” and “loyalty only” to the era in which he lives, it will be correct to present the director’s speech itself. Indeed, in this speech, Mikhalkov, to whose creativity everyone is free to relate in his own way, actually lays out on the shelves what the Yeltsin Center actually turned into.

The following fact is noteworthy: for 4 for more than 24 days from the date of publication of the clip with Mikhalkov’s speech (first-hand by the press service of Sovfed), not so many YouTube users watched (about 4 thousand people at the time of publication of this material by your humble servant ), but there were, perhaps, an order of magnitude more posts in social networks and articles in the media. Comments to the video and do ZERO, but how many comments from the ultra-liberals in their cozy blozhikah ...

This fact proves that most of those who speak with sizzling criticism of Mikhalkov’s statements have not fully heard these statements by the director and have not seen the speech themselves. Mikhalkov, what the Yeltsin-center advocates are trying to blame him for, is not at all negative about Yeltsin. He raises the question of the objectivity of views on history and the comprehensive approach to its study. Mikhalkov says that how the history of Russia is presented in the Yeltsin Center, hiding behind the name of the first president of the Russian Federation, is in fact a matter of national security. According to the filmmaker, everything is presented as if the 1000-year history of Russia is an impenetrable darkness (without military, technological, sports and other victories) that lasted only until Yeltsin came to power after the collapse of the USSR.

Mikhalkov:
There are daily injections of the destruction of the national identity of children. (...) According to this cartoon film (it is shown in the Yeltsin Center), there was no one in our history except Boris Nikolayevich (Yeltsin). No one ... Country abominations, Asiatic, bloodshed, dirt, etc. (...)
The conversation is not about punishing someone, it introduces censorship. The conversation is about to give some second part of the idea of ​​the country. Yes - a lot of evil. Yes - a lot of scary. But ... "a cruel truth without love is a lie." There is no love, no respect for anything that preceded the 90 years. This is a national security issue. Every day hundreds of children go there. They get this poison every day.


And this, so that the subject of the conversation was clear ... If someone from the readers of “VO” did not have time to visit the Yeltsin Center and see the very “historical cartoon” (and in the materials of “VO”), about the negative impact of which on young visitors and says Nikita Mikhalkov, here is his record:

So, it is clear that Mikhalkov calls poison and injections the destruction of national identity. He calls not to be bulldozed around the Yeltsin Center, but to approach in terms of respect for the entire history of Russia, and not only for the history of Yeltsin, by changing the approach both to the exposition and to the multimedia content of the Yekaterinburg museum.

From Nikita Mikhalkov’s explanation to Naina Yeltsina:
I deeply regret that I caused you disappointment, but I am sure that you were misled by interpreting my words from a certain angle.
I have never said that Boris Nikolayevich is not worthy of a museum, this is not true. (...) Anyone who was at the height of power is worthy of the memory of him. That is why I fought so hard, defending the installation of the monument to Ivan the Terrible in the city of Orel.

I really personally did not go to the Yeltsin Center because of the constant patrols, but there were several film crews who were sent there specifically, which completely filmed all the expositions, exhibits, interiors, cafes, people's opinions, and so on. And believe me, I have a very complete picture of what is happening there. (...)

You blame me for the fact that I was a confidant of Boris Nikolayevich and helped him during the elections, and now supposedly I think otherwise. Dear Naina Iosifovna, I never refused and do not refuse a single moment of my past. I took part in the elections quite consciously and said everything that I said, quite sincerely, because for me and for many other people at that moment there was no alternative to Boris Nikolayevich. In addition, at that time, no one, at least, of those who voted for Boris Nikolayevich — myself including myself — could not imagine the whole depth and tragedy of the situation in which the country would be. These are the sold out plants, the ships sold for a penny, the humiliated army, the impoverished people, and the destroyed science. But I am sure that it is unfair to place all responsibility for this solely on the shoulders of Boris Nikolayevich. (...)

But, I repeat, this in no way can influence the question whether the Boris Nikolayevich Yeltsin Museum is needed or not. He, of course, is needed and not against the museum of Boris Nikolayevich my voice sounds. I am against the systematic work going on behind Yeltsin's name, behind his back, in the Yeltsin Center, slowly and carefully destroying the historical identity of children and young people coming there.

The very point of the problem is indicated. This is not about the fact that museums dedicated to the epochs of certain rulers are not needed at all, but about the fact that the ideology of the destruction of Russia should not work under the guise of these museums. Today, such an ideology is frankly present in the same Yeltsin Center.
In such a situation, some citizens get a "trump card" from their sleeves: they say, well, if Putin and Medvedev were present at the opening of the Yeltsin Center, laid bouquets of roses, then everything ... the nest of ultraliberalism going against national interests will now flourish being "under the protection of, you know whom." Yes, that's just there is no protection from "you know who." No, it is not necessary to invent it, shaking before the eyes of others. 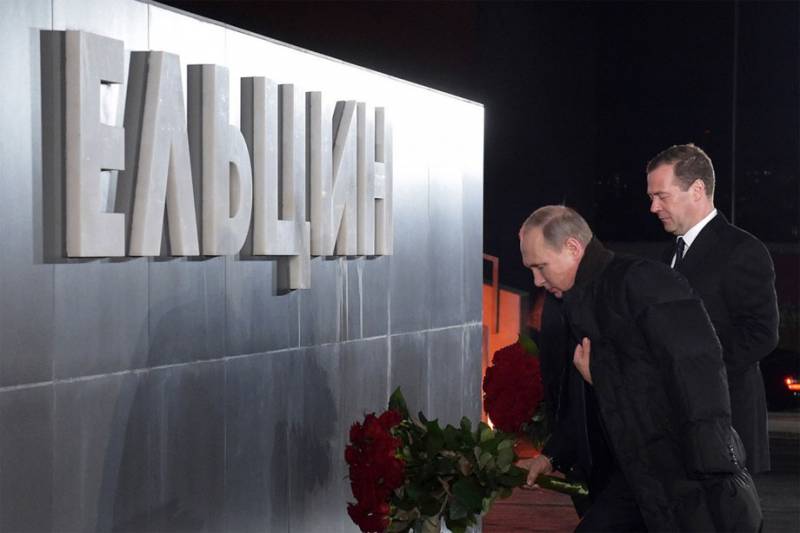 This is indirectly indicated by Mikhalkov himself: one thing is a personal attitude to Yeltsin (and it can be from reverence to indignation) and quite another thing is how from the Yeltsin years a certain group of people are trying to create a statue for blind worship, promoting far from government interests and distorting the entire national history.

After all, if one or another high-ranking official is present at the opening of a new school, then, based on the logic of individuals, it should be blamed for the fact that in the canteen of this school, instead of the normal hot, children are served boiled water “homeless packages”? .. Or something ... Is this an excuse for President Putin? Not. But the conspiracy "logic" in the style of "the cat threw the kittens ...", sorry, somehow it does not deliver ...

If the Yeltsin Center from the distributor of ultraliberalism and podmahivatel Western "values" can be reformatted into an object, where in the first place is not an idol, but the historical context with its pluses and minuses, then all questions to the center's activities will disappear by themselves. But the fact of the matter is that for the ultra-liberals it is the real “temple”, whose leaders also intend to conduct their active missionary work in the country. And if the temple, then its inhabitants need to be reminded, as they themselves often do, that our religion is separated from the state - see the Constitution - the model, by the way, adored by 1993 liberals of the year ...

Ctrl Enter
Noticed oshЫbku Highlight text and press. Ctrl + Enter
We are
Results of the week. “Apolitically argue, I swear, honest word”Results of the week. "Who you are lucky, in fact, and will carry a cock, and such a bird as you, I, too, will rush!"
120 comments
Information
Dear reader, to leave comments on the publication, you must to register.