A quarter of a century later - forward to the Union 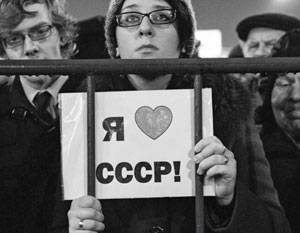 25 years ago, the Soviet Union was dissolved - the leaders of three Slavic republics gathered in Belovezhskaya Pushcha in 7 – 8 in December declared the death of the USSR and the creation of the CIS. After a quarter of a century, the attitude of Russians towards this event remains negative - the absolute majority regrets the collapse of the USSR, and the relative majority considers the course towards integration and unification of the former Soviet republics to be correct.


The USSR was killed 8 December 1991 of the year - despite the terrible wounds received in August of the same year, the Union could still be saved.

But Yeltsin, Kravchuk and Shushkevich, inspired by the “gray cardinal” Gennady Burbulis (the number two man in Russia of that time, whom Mikhail Gorbachev still considers the main cause of the collapse of the USSR), decided to dissolve the Union - this did not in any way meet the federal legislation of that time, but Gorbachev had little power left by that time.

The heads of Russia, Ukraine and Belarus ascertained the death of the USSR - in fact, having turned off a single state, arranging forcible euthanasia to it. A quarter of a century has passed since those events - and all this time, citizens of Russia consider the collapse of the USSR wrong.

In March 1992, 66 percent regretted him, now, according to the latest Levada Center poll, 56. During these years, only once, at the end of 2012, the number of those who regretted fell below half, to 49 - and their maximum number was 2000: 75 percent. That is, despite the change of generations, despite the crisis in the country or the growth of incomes, still the majority of citizens consider the collapse of the USSR to be wrong and believe that it could be avoided - the number of those who are confident in this also steadily exceeds half (now - 51 percent). The number of those who consider the death of the USSR is approximately the same. historical inevitability (that is, it shares the attitude that prevailed in the 90s and remained as semi-official even today) - about one third (29 percent according to the latest survey).

The fact that people are confident in the viability of the USSR is very significant - and much more important than what they consider to be the main reasons for its death. However, they should also be listed - in the first place, there is a consistently “irresponsible and unreasonable“ Belovezhsky collusion ”by Yeltsin, Kravchuk and Shushkevich” (this is how it was formulated even in the survey of the most liberal “Levada Center”) - now 29 percent think so . The top three main reasons also include the “conspiracy of foreign forces hostile to the USSR” (again, the wording of “Levada”) and “public discontent with the leadership of the USSR, M. Gorbachev and his entourage”: 23 and 21 percent, respectively.

All other reasons (from national policy failures to economic difficulties) are less common: from 10 to 15 percent. The main thing is clear - the majority believes that the USSR did not die for natural reasons, but was killed. And this conviction itself is the most important political factor in our life.

Because the beliefs of people actually directly influence the direction of the country's movement - and it is clear that Putin is pursuing Eurasian integration, not only because these are his views or this is in Russia's national interests, but also because people want it.

But first, in search of what lost feeling are the Russians? There are five main reasons for regretting the collapse of the USSR. In the first place - because "the single economic system was destroyed," so say 53 percent. It can be assumed that, answering this question, many had in mind not so much the “single complex of the national economy from Ukraine to Central Asia”, but the socio-economic structure, that is, the socialist system, social equality (because there is no single question about the social structure). not).

43 percentages regret that “people have lost their sense of belonging to a great power” - this figure has dropped in the past two years from 56 percent, but this can be explained by the fact that in recent years, there is a sense of pride in their country (more precisely, defends his own interests) has begun to return to our citizens, and by no means all of them consider “sovereign pride” to be a sign of the Soviet era only.

Almost a third noted that after the collapse of the USSR “mutual distrust, bitterness” (31 percent) increased, and “the feeling that you are everywhere at home” (30 percent) was lost. 28 percent are dissatisfied with the fact that “ties with relatives and friends are destroyed” - that is, people understand that part of their Motherland has disappeared from them. What to do with it?

The people on this score is not silent. Restoring is not literally the USSR, but a single country. This is what the results of the answers to the question "What form of relations between the republics of the former Union would you personally support?"

Total 13 percent were in favor of the independent existence of all the republics. Even if you add 21 to the percentage of those who are satisfied with preserving the CIS in its current form, and 8 percent undecided, it turns out that almost 60 percent support this or that form of reintegration of the post-Soviet space, or, in Russian, for picking up big Russia .

At the same time for the literal restoration of the USSR - 12 percent, although even at the beginning of the zero years there were a quarter of those polled. And now 25 percent considers it right “to unite several republics, if desired, into closer alliances”, and 21 percent also stands for “closer integration of all the republics of the former USSR, like the European Union”. Here, of course, not very correct, in fact, overlapping formulations - but the meaning is clear. The majority are in favor of a consistent rapprochement and unification of a part or even of all post-Soviet states — and it is clear that Russia should and can implement this policy.

So the reintegration process - initiated by the creation of the Eurasian Economic Union, continued by the return of the Crimea and the policy of ousting Atlantic influence from the post-Soviet space - will continue. He will gain strength, and at the same time he will probably be completely non-linear, will acquire all possible forms on his way that the existing circumstances will provide for him.