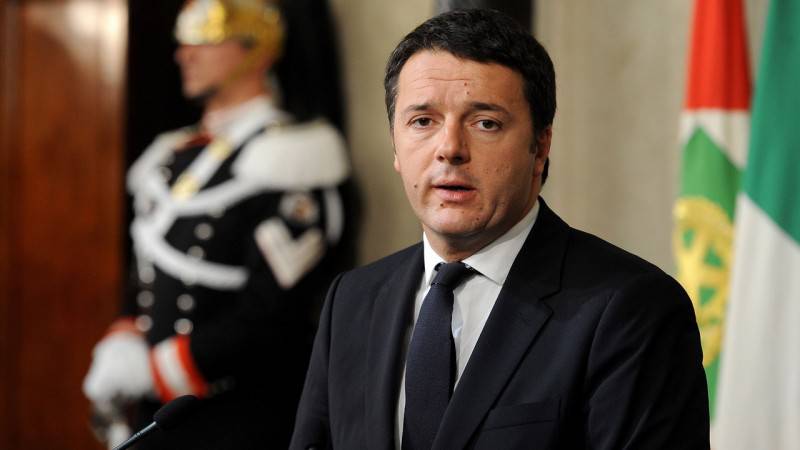 December 4 in Italy held a referendum on amending the country's constitution. The majority of votes (60%) was cast against new laws. Prime Minister Matteo Renzi, who became the author of the amendments submitted for discussion, earlier promised to leave his post in the event of failure to vote.

The essence of the amendments

Voted last Sunday at once on several issues. First, Renzi proposed reducing the number of members of the upper parliament (Senate) from 315 to 100 so that lawmaking in Italy would become more productive. The country is faced with a situation where, due to the mass character of the parliament, any decision may be delayed for years, or even remain without result.

Secondly, the Prime Minister in the interests of the economic development of the country, in which the financial sector demonstrates a serious recession, proposed limiting the power of the regions by adding powers to the president and regional representatives in parliament. Energy issues, strategic infrastructure and civil defense, in his opinion, would be more effectively addressed by the central government.

The fact is that a country with cardinal regional differences, united only in the second half of the XIX century, a priori cannot be ready for the transfer of authority to the center. Unification is not a solution for a country where the north and the south by all possible criteria are not similar to each other.

What could have been achieved by referendum

If these amendments were adopted, Renzi could postpone discussions about Italy’s withdrawal from the European Union. His plans were to hold a meeting at the G-7 summit in 2017, the outcome of which was to be the allocation of assistance to African countries. This could reduce the number of refugees, the money for which is allocated from the country's budget, and therefore, leave the funds for the improvement of the financial sector. In addition, Renzi was not satisfied with the new EU financial norms, according to which the Italians' bank deposits could be devalued or cut back (!).

The Prime Minister planned to send taxpayers' money to the improvement of the banking sector, which is prohibited by banking rules. Thus, EU regulations may have such an impact on the Italian economy, that the country will be on the verge of a financial crisis, which will be able to pull the entire Eurozone along.

Renzi became one of the few people who, although pursuing their own interests, offer a more or less conservative future. The rejection of the reforms proposed by him will require more decisive and more perceptibly painful steps, not only for Italy itself, but also for the whole of Europe.

Many compare Cameron’s actions with attempts to reform Renzi, but there are significantly more differences between politicians and their program than similarities. Cameron used the referendum to put pressure on the EU in order to achieve more favorable membership conditions. Cameron actually blackmailed the European Union with a referendum in the hope of an exceptional situation for himself and the Cabinet. The people were a tool for a politician whose career ultimately ended rather ingloriously.

Renzi used the referendum as a risky move, again for his own advancement along the career ladder. But if he managed to achieve the amendments, for his country he would become a major reformer and a serious figure for the EU economy. Unfortunately, youth and excessive ambition played against Renzi, who proposed measures that were justified but not at all suitable for the Italians.

What happens next with Renzi

According to the formal procedure adopted in Italy, Renzi, as he has already announced, will hand in his resignation letter to the head of state Sergio Mattarella. Further, the president should take the final decision: he either accepts the resignation and declares the dissolution of parliament, which presupposes the appointment of new elections, either asks the retired prime minister to head the technical cabinet or invites someone else whose candidature would suit a parliamentary majority. The latter scenario, according to observers, is less likely, since opposition representatives have repeatedly stated that they will not agree to a technical government and will seek early elections.

The holding of early elections immediately, as required by the opposition, is hampered by the actual absence of electoral legislation. The relevant approved law (“Italicum”), firstly, is not yet recognized as constitutional (court decision is expected), and, secondly, regulates elections only to the Chamber of Deputies, whereas after the rejection of constitutional reform, the senate remains.

Thus, his resignation is not the only possible development of the situation, in fact, Renzi may well remain in his place "at the behest of third parties." It is worth noting that the entire political elite of Italy is elected in such a way that you can choose "each other." Very convenient mutual responsibility in a situation where “our people” are needed everywhere.

What will happen next with Italy and the EU

The failure of the referendum is a good chance for the oppositional Italian Five Stars party, which advocates for the country's withdrawal from the European Union, not only to call for early elections, but also to campaign for the soonest holding of the referendum. In addition, the presence of other influential opposition groups makes the party of power less and less powerful, and the emergence of new arguments against being in the European Union expands the field of activity for parties.

For the European Union, Italy is the third largest economy, a large territory, and a large trading partner. But finding it without taking action can undermine the financial structure and currency, and its output - the stability of the Union as a whole. Thus, no matter how Italian voters may behave, after the sole reformer has recused himself, it is difficult to imagine an idyll in relations between Italy and the rest of Europe.

On the one hand, the performance of the Italians against the current premier showed that the authorities do not understand their people, and the people do not really trust the authorities. On the other hand, such a decision 60% of those who voted untie the hands of the main opposition movement (by the way, the mayor of Rome is also a member of the Five Stars).

Will the current position of Italy turn into a catastrophe for Italy itself? Not. Because it has been bad in the country for several years now, and this is “bad” for finance, but it is so strong that the lack of measures is very silly on the part of the government. So it’s not a referendum that will let the current government under the monastery.

Will the current position of Italy turn into a disaster for the EU? If we talk about Italy’s withdrawal from the Union, the effect is unlikely to be as strong as the loss, for example, of Britain, was offensive. It is impossible to speak unequivocally about the impact of the gradual self-liquidation of EU members, because it strikes both the image, and the idea, and the values, and the budget. Where to put migrants, from whom to collect loans to other countries and other problems that arise with the release of even one large country? And if Italy still remains in the union, the main issue that will have to be resolved urgently is the issue of financial and economic recovery, which Renzi could not solve.