Was the “failure” of the Naroch operation of 16 of the year?

December 5 2016
42
It was believed that the Naroch operation was an extremely unfortunate episode of the First World War - both useless and bloody. But is this really the case?


By the beginning of the 1916 campaign of the year, the strategic planning of the Russian High Command was largely determined by the general coalition plan defined at the November conference of the Entente 1915 in Chantilly.

11 February 1916 at the meeting of the senior commanders of the Army in the Supreme Command Headquarters identified the contours of the main attack during the summer campaign of the year. It was assumed that this strike was to be inflicted by the efforts of two fronts - the left flank of the North and the right flank of the West.

Active actions in the French and Russian fronts had to be coordinated in time. They were planned for early summer, but the large-scale offensive of the Kaiser divisions near Verdun confused the Allies with strategic maps.

It was the catastrophic situation of the French troops on the Verdun front that forced the Russians to launch an offensive ahead of schedule, which led to the Naroch offensive operation 5 - March 17. Thus, the implementation of the basic principles of the coalition war led to the premature offensive of the Russian troops in the northern sector of the Austro-German front.

The plan of the operation of the two fronts assumed a strike in the area of ​​Dvinsk - Lake Naroch - Vishnevskoe. It was planned, having made a strategic breakthrough, to cut off the Vilna group of German troops from Kovno (taking possession of the city) and crossing the Neman River and, bypassing the German grouping concentrated at Dvinsk and Riga, reach the borders of East Prussia. The northern front was supposed to advance from Jacobstadt to Ponevezh, and the Western to attack in the direction from Smorgon to Vilna.

But the implementation of this large-scale planning rested on the currently insurmountable difficulties - the deeply defensive enemy and the excellent communications of the German troops. Having mastered a network of strategic railways in the summer campaign of the 1915 year in the Baltic States, the German command could transfer operational reserves in virtually any quantity. 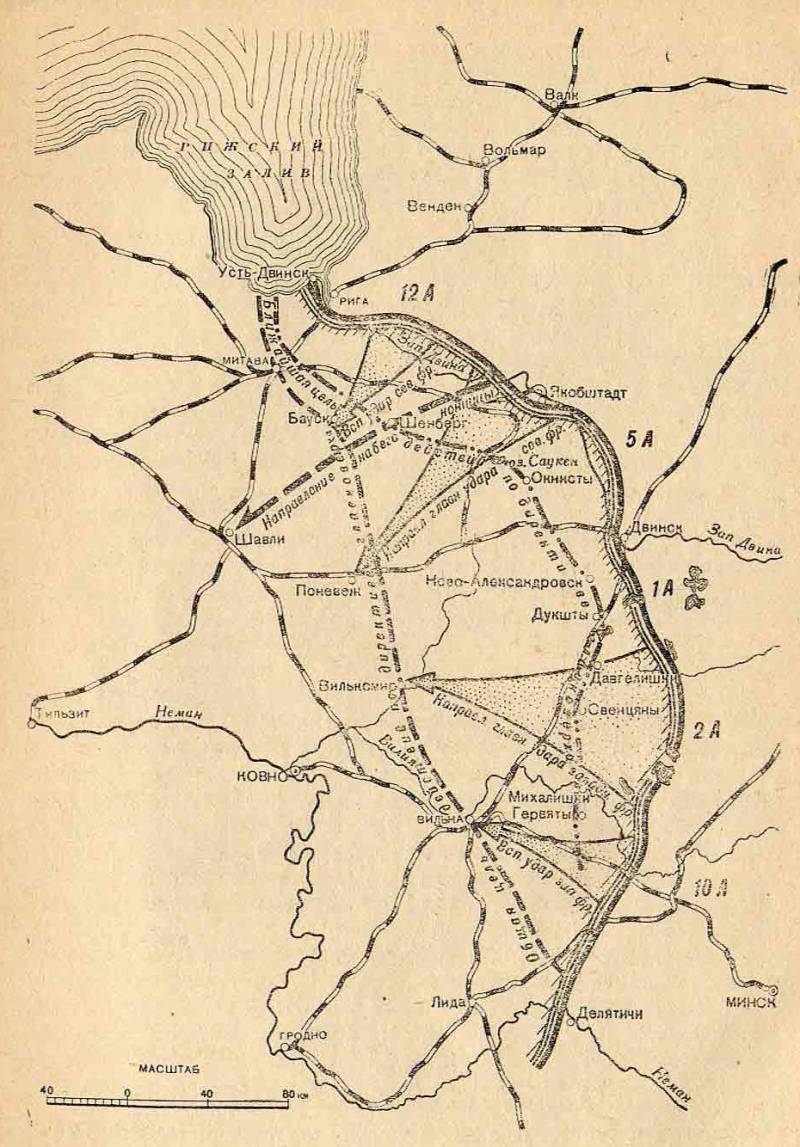 The strike force of the Russian troops during the Naroch offensive operation included troops of the 2 and 5 armies (with reserves, these are 12 army corps). The general leadership of the operation was carried out by the commander of the 2 Army (inflicting the main attack), General of Infantry V.V. Smirnov, but after he fell ill, his army was transferred to the command of General of Infantry A.F. Ragoza. In fact, the latter carried out the general management of the Naroch operation.

The size of the shock group of the 2 Army is up to 375 thousands of bayonets and sabers (in total, up to 460 thousands of people were involved in the operation). The grouping is strong enough, but not sufficiently provided with artillery - only about one thousand light and a hundred and fifty heavy guns were involved. The artillery densities at the main strike site averaged 12 - 18 (in some areas up to 35) guns per kilometer of the front. The rate is high for the Russian front, but significantly lower than the standards that existed at that time on the French front (where they were up to 100 guns per kilometer).

The opponents of the Russian troops of the 2 and 5 armies were units of the German 10 armies, as well as part of the forces and equipment of the 8 armies and the F. von Scholz army group (up to 120 thousands of people, including 82 thousands of fighters in 10-th Army). German troops have long occupied deeply echeloned positions and constantly improved them. The offensive area was a wooded, swampy and lake-like terrain and was tactically very difficult, especially in conditions of spring thaw. The commander of the East German Front, P. Hindenburg, noted in his memoirs that as a result of the melting of snow, the thaw had turned the battlefields on this sector of the front into "bottomless swamps."

Artillery zeroing, carried out for three days, allowed the Germans to see the area of ​​the main attack. As a result, the offensive turned into heavy positional battles, the pace of advancement was low, and noticeable but local success was achieved only by a left-flank shock group (P.S. Balueva).

And yet, despite the fact that the positional war established on the Russian front a full year later than in French, and, accordingly, the Russian army only studied the art of positional warfare, the tactical results of the offensive were no worse than in similar operations with the British and the French.

For example, the troops of P. S. Baluev, advancing on the inter-grain area (Naroch-Vishnevskoye), during the battles of 5 - 8 of March, captured the fortified positions of the enemy, captured the town of Postavy, capturing more than a thousand people (including 17 officers). German units were destroyed in clashes over their lines of defense or captured. 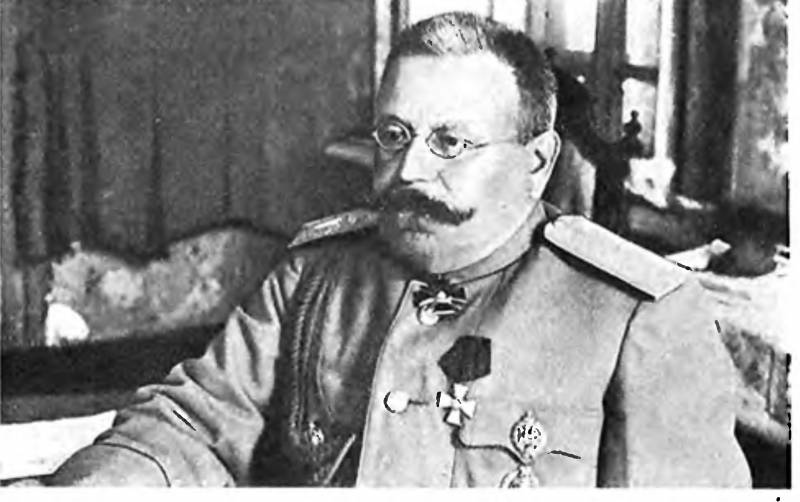 Il 2. General of infantry P. S. Baluev, commander of the group of corps that achieved the greatest tactical success. Chronicles of the War 1914-15-16 No. 107.

But the tactical breakthrough of the enemy’s defense on March 8 was not developed operational. The main obstacles were the difficulties of pulling up reserves (this was prevented by the barrage of unsuppressed German artillery) and tactically difficult terrain. At the same time, German troops were morally shocked by the loss of two lines of defense and made every effort to return them.

E. von Ludendorff noted in his memoirs the Russian success in the lake gorge, which was very painful for the German command, and the situation on the front of the 8 army and the army group of von Scholz was no less difficult for him.

During the Naroch operation, the losses of the attacking Russian troops amounted to over 78 thousand people, and the defending Germans lost up to 40 thousand people (including up to 1,5 thousand prisoners - 20 officers and 1435 noncommissioned officers and privates). Russian trophies were 18 machine guns, a howitzer and 36 enemy mortars. Moreover, the German units suffered particularly serious losses when they tried using counterattacks to recover their lost positions. 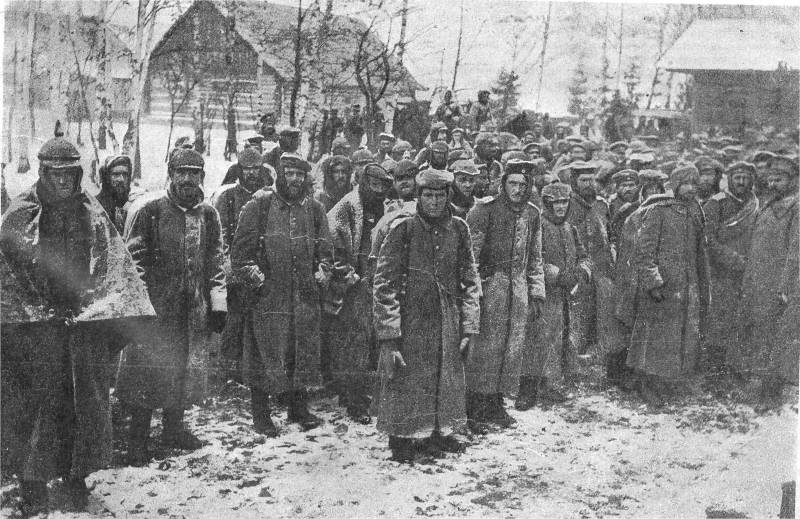 So, operatively, the Naroch operation was unsuccessful, but strategically it was not unhelpful.

During the whole week, when the Russian units achieved the greatest tactical success during the martial offensive, the German attacks near Verdun ceased. And it happened in the most difficult period for the allies of Russia "meat grinder". About the transfer to France of the German troops from the Russian front during this period there was nothing to think about. Moreover, the activity was shown by the Russian troops in the period of the traditional at this time of year at the calm front.

For the Russian front, the important consequences of the Naroch operation were revealed in the presence of the fact that the main strategic and operational reserves of the East German Front were in June 1916, concentrated north of the Pripyat swamps. And such a grouping of German reserves contributed to the future success of the offensive of the South-Western Front.

In the course of the operation, the German forces fighting near Naroch grew by 30 thousands of bayonets and 230 guns. And at the end of March, the grouping of German troops, opposing the Northern Front, increased to 200 thousand, and the Western Front to 420 thousand bayonets and sabers — that is, thousands of fighters increased by 82.

We see that the troops of the Western and Northern fronts held down the main part of the German group on the Eastern front (over 600 thousand people), forcing the German command, albeit temporarily, to go on the Verdun front to the defense. In addition, without the Naroch operation, the Offensive of the Southwestern Front would not have been so vivid a result — that which would later be called the Brusilov breakthrough.

In the domestic military stories there is an opinion that the tsarist cannibal generals considered the soldiers to be "gray cattle" and consciously drove them to slaughter for the sake of imperialistic interests. But what is interesting. The Russian army in the First World War basically avoided the "meat grinders" on the French model, when the command of the allies and Germans on the French front deliberately doomed their own troops to huge losses. In particular, E. von Falkengine organized the "Verdun Mill", deciding to grind the French army, at the same time ruining half a million of its own soldiers. The Allies of Russia on the Entente, conscious of their superiority over the Germans in manpower and resources, resorted to the so-called strategy of “exchange” - they sought to cause major losses to the enemy, in turn bearing huge losses. The “Nivelle Massacre” of 1917 of the Year is a great illustration of this. Conversely, the Russian generals (in particular, in 1916, the commanders of the Western and Northern fronts, the generals from the infantry A.E. Evert and A.N. Kuropatkin), protested against the offensive of their fronts, motivating this circumstance by the enemy’s deep-echeloned defense technical resources - and, as a result, the prospect of spilling soldier's blood with insignificant operational and tactical results.

The practice of applying double standards that has existed in relation to the history of the First World War for a hundred years has led to the fact that the operations of the Anglo-French troops, advancing several hundred meters during the offensive and occupying several craters, are characterized as combat success, while (rather infrequent) Russian offensive (for example, the Naroch offensive considered here), moving forward several kilometers and with lower losses than the allies, are considered a heavy defeat.

Thus, we see that strategically, the Naroch operation was far from useless, and tactically no more bloody than many actually useless operations on the French front of world war.