November 16, 2016
48
According to the Russian media of not the largest format, a wave of reports has spread that the first school of independent investigations is starting its work in Russia. First! The authors of the project report that cases with independent journalistic investigations in Russia are full of seams, you see, they do not teach this at the journalism departments, and therefore a team of enthusiasts who are ready to prepare everyone who wants to prepare within the framework of the newest and most effective program has crept up. We are talking about a media project, which ultimately must release "investigative bloggers" who are able to collect, structure, analyze and give out to the public information from purely independent positions.


At first glance, a school is like a school ... Even a necessary one ... Well, if at the faculties of journalism they "are not taught" the methods of conducting independent investigations, as the teachers of this school today claim, then why not really engage in such asceticism in the field of training true professionals of his case. And they took up ... They are looking for talents, funding, giving way to life, you know ...

In turn, why not engage in an independent journalistic investigation of the activities of the “investigative journalism” school itself, especially since this school is in favor of independent investigations only. On this basis, very entertaining materials about the activities of this non-profit organization were collected and, as they are going to teach in the said school, structured, analyzed and presented. And the word "entertaining" is the most gentle that in the context could be applied ...

The School of Independent Investigative Journalism is part of the SALT project, the main ideologist of which is a man named Grigory Pasko. He represents himself only as director of the Investigative Journalism Support Fund. The organization has its own website, on which it is reported that the search for applicants for the 12-13 November course was held in Vladimir, and the November 26-27 will be held in Moscow. 8 November the school tried to work in the Komi Republic - the city of Syktyvkar.

From materials Site:
The SALT project team launches recruitment to the first school of investigative journalism.
Our friends and partners, our experts will train full-time and distance 30 journalists and popular bloggers, whom we will select on a competitive basis.

Following the results of training, each graduate will be able to conduct and publish his own investigation with the help of those school experts who will be useful to him.

We return to the main expert of the school, Mr. Pasko, whose surname is known to many of our readers. And she is known in connection with materials that this “expert” at one time (in July 1999), being a representative of the community of military journalists and a member of the international non-governmental organization PEN Club, the Pacific Military Court fleet He was sentenced to one year in prison under Part 1 of Article 285 of the Criminal Code of the Russian Federation (“Abuse of official authority”). Two years later, the Pacific Fleet military court found Grigory Pasko guilty of a much more serious crime - state treason in the form of espionage for trying to take documents to Japan, which, according to the prosecution and the court, contained information constituting a state secret. This information was supposed to be published in Japanese media, including the NHK. Of the 4 years to which Pasko then sentenced the court, he spent about six months in prison and, having been released, immediately found work as a columnist for Novaya Gazeta.

To review oneself is no longer that ... - Grigory Pasko decided today and thought that it was time to teach others to review. Who picked up at the moment? From the message of Pasko himself:
Artist-designer, economist, students, schoolchild, police captain, hydrologist, internal troops officer, teacher stories, two journalists ... This is the group in the newly opened (...) under the leadership of the 19 / 29 Foundation (in partnership with the Glasnost Defense Foundation and the Faculty of Journalism of Moscow State University) school of investigating bloggers. 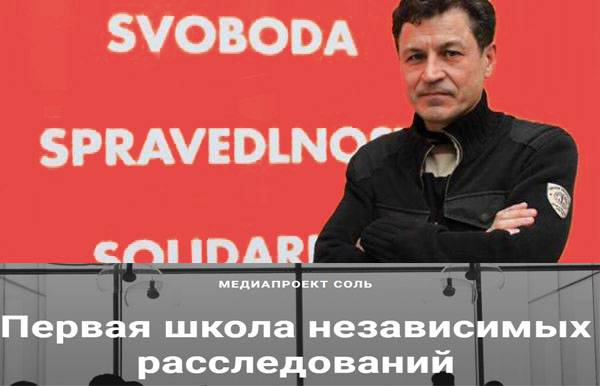 As you can see, a certain 19 / 29 Foundation emerges. What kind of "beast"? It was no big deal to find information about what he is. On the Facebook social network on the fund page in the section "Information" You can read the following:
Czech non-governmental organization designed to protect the rights and interests of investigative journalists.

There is this Czech organization, which suddenly decided to prepare “independent journalists” in Russia from among schoolchildren and even police officers, and its own website http://foundation19-29.com. On the website - voila - again Mr. Pasko in all its glory with a comment like this:
We - the Fellowship of Investigative Journalists (Sdružení investigativních novinářů - Fond 19 / 29), have registered our organization in Prague (Czech Republic) in the 2015 year.
We are professionally, financially and legally supporting independent journalists and bloggers in conducting investigations using modern technologies; We strive to unite the potential of professional and citizen journalism to increase the level of investigations and the development of civil society.

Now it will not be superfluous to recall that, literally a few months ago, Western publications, one after another, began to publish materials on increasing the funding of various media and "non-living" bloggers in European countries to counter "Russian propaganda." Among the leaders in obtaining such funding is the Czech Republic, where, as is known, the main office of Radio Liberty has long been operating - a radio station famous for its “super truthful” and “super-independent” materials ...

More in 2012 in LiveJournal Grigory Pasko I told about invited expert lecturers:

The lecturers whom I have already invited and who are going to call to us are respected and famous people. In addition to professional journalists, linguistic experts and lawyers, I hope Victor Shenderovich, Boris Akunin, Dmitry Bykov, Rustem Adagamov, Anton Nosik, Oleg Kozyrev, Elena Panfilova, Kirill Kabanov, and many others will look at us. I have already sent a separate invitation to Alexey Navalny ...

In general, the strings led to the fact that it was most likely to receive funding from this “independent school” from foreign sources, plus “expert” functions from a person who didn’t wait until the end of his treason ... So, before us, under the guise of an objective journalism school - another project to prepare the “daughters of the officer,” whose “is not so simple” ...