November 13, 2016
28
65 years ago, 14 in November 1951 of the Year Yugoslavia (FNRY) and the United States signed an open-ended agreement “On mutual security”. What this later turned out for Belgrade is well known. Is Ukraine not following the path, actively developing military-technical cooperation with the United States and NATO?


When Yugoslavia was needed as a counterbalance to the USSR and its Balkan allies (along the way, Stalin-Pro-Chinese Albania), it received enormous financial and military-technical assistance, especially from the United States. The West, as it were, did not notice the growing external debt, urging Tito not to dwell on the problem: they say, pay it back when you can. With the beginning of the Soviet perestroika, the West did not need to counterbalance Moscow. And Yugoslavia paid off - a bloody collapse.

The current political and economic situation in Ukraine is hardly different from the one that was in FNRY at the end of 40-x - the beginning of 50-s, that is, after the break with the USSR. It is reasonable to assume that the West is once again using a scheme successfully tested in the Balkans. But the social and economic "showcase" from Ukraine will not be done, unlike Yugoslavia, 50-x - the beginning of 80-x. If only because the frontier of the former union republic penetrates into the Black Earth-Don and Azov regions of the Russian Federation. Such a geographical alignment is an excellent reason for anti-Russian provocations and the creation of a direct threat to the security of the Russian Federation. And the Kiev rulers can not be compared in authority and intelligence with Tito (for all its unpredictability). Therefore, in fact, they will never be able to use Western financial injections for the rapid development of the economy and the corresponding increase in the living standards of their fellow citizens, as was the case in Yugoslavia.

As for the Washington-Belgrade Treaty on "Mutual Security," it has become a kind of official starting point for the expanding US intervention in the domestic and foreign policy of Yugoslavia. And accordingly, the first stage of the long-term plan for the collapse of the country.

This treaty, moreover, outlined the official support by the United States of the confrontational policies of Belgrade with the USSR and its allies. Political and ideological conflict with Moscow Yugoslavia provoked in 1948 year. From December 1951, American weapons began to flow into the country; the country's army and intelligence received advisory advisers from the United States. 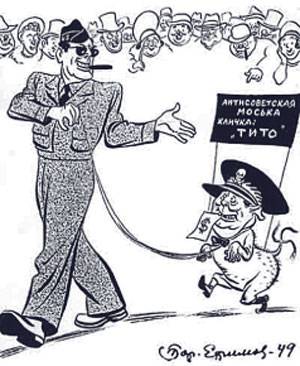 It is known that, on the basis of the aforementioned treaty, Bandera, anti-Soviet agitation, and all sorts of spyware were transported from the West through the north to Yugoslavia to Ukraine. More precisely, the corridor passed through Hungary, which, on 270 – 300 kilometers, separated FNRY from the Ukrainian SSR. But Budapest in the person of Matias Rakosi did not stand on ceremony with the captured “transit countries” and their belongings. Incidentally, this was one of the main reasons for the joint actions of Tito and Khrushchev in discrediting Rakosi and subsequent resignation.

Italian Prime Minister Alcide de Gasperi said in January 1953: “Yugoslavia, having signed a military-political treaty with the United States, de facto joined the North Atlantic Alliance. Probably, the help of the anti-Titic and nationalist opposition in Yugoslavia, given the role of this state in countering Moscow, is less relevant than the full support of Tito’s policies. ”

External debt is very respectable in appearance SFRY eventually became one of the main reasons for its socio-economic collapse and the subsequent collapse. It was necessary to pay percent of bills on 85 in the post-Hitachi period, that is, starting from 1981, with which Belgrade, as we know, did not cope. The message of the Belgrade newspaper Politika-Express from January 15 of 1989 of the year is noteworthy: “Yugoslavia received 1949 billions of dollars from the USA in 1964 – 30 only as gratuitous aid.”

Probably, Kiev hopes that Ukraine will be the “indefinite” bridgehead of the United States - NATO against Russia, and therefore the country's economy will not be left to fend for themselves. But the West did not have and does not have eternal allies. The fate of Yugoslavia is an example.

It is useful to remind that Moscow after the Great Patriotic War contributed to the restoration of the sovereignty of the Ukrainian SSR in the Danube Delta, most of which belonged to Romania to 1945. The strategic islands in the western sector of the Black Sea were returned to Ukraine. When Romania, joining the EU and NATO, began to lay claim to the said territories because of the presence of oil and gas reserves there, the Russian Federation supported Ukraine. And Bucharest retreated - for how long, if we take into account the current circumstances?

The USSR pursued the same policy with respect to Yugoslavia, even after it signed a military-political treaty with the United States. In 1950 – 1952, when the final line of the Yugoslav-Italian border was discussed, Rome insisted that it belonged to the islands of Palagruzh, Yabuk, and others. With them, standing in the very center of the Adriatic Sea, it is possible to control shipping across the sea, which was possible for Italy in 1920 – 1944. The Soviet Union supported Yugoslavia in this dispute, including in the UN. The then Foreign Minister of the USSR, Andrei Vyshinsky, informed the Italian government in September 1952: “Moscow considers Palagrugu, Yabuku and the adjacent islands to be originally Yugoslav territories, which, together with the neighboring port of Zadar, occupied Italy at the beginning of the 20s”. Thus, the vast Adriatic basin remained virtually controlled by Yugoslavia until its collapse. Now these islands are Croatian, that is, NATO.