Day of the employee of the internal affairs bodies of the Russian Federation. Long way to police ranks

November 10 2016
51
November 10 celebrate their professional holiday employees of the Russian internal affairs bodies. This significant date has its roots in the not so long Soviet past. It was in the Soviet Union that the professional holiday of law enforcement was established - the Day of the Soviet Militia. According to a special decree of the Presidium of the Supreme Soviet of the USSR from 26 September 1962, it was celebrated on November 10 every year in honor of the resolution of the People’s Commissar of Internal Affairs A.I. Rykov “On the Workers' Police”, adopted on October 28 (November 10) 1917 of the year, immediately after the October Revolution.


For almost a hundred years of existence of the Soviet, and then the Russian law enforcement agencies, they have repeatedly undergone major changes. Changed the organizational structure, departmental affiliation, methods of activity. Of course, there were changes in the rank system of employees. We will tell about it in more detail.

As for the lower ranks of the tsarist police, the policemen, they were staffed from demobilized soldiers and non-commissioned officers, therefore they were divided into three categories. Soldiers and corporals who entered the police service became junior salaries, junior non-commissioned officers became middle-level salaries, and senior noncommissiones became junior salaries of senior salaries. On the pursuit of a policeman he wore such a number of lycheku, which corresponded to his military rank in the army, and belonging to the category of policemen was determined by the number of gombohek on a twisted shoulder cord. For example, the city's lower salary, demobilized from the army in the rank of corporal, wore one tarp on a pursuit and one jacket on a cord. Demobilized sergeant-officers, who belonged to the city chief salary, were usually appointed assistant attendants. In turn, police officers in the Tsarist police held a special position - they did not belong to the lower ranks, but they did not belong to the class ranks, although, according to the law, they enjoyed the privileges of 14 grade officers. On the uniform, police guards wore epaulettes with a longitudinal galloon - as sub-ensigns of the pre-revolutionary army or the foremen of the Soviet army and police.

After the October Revolution 1917, the ranks were abolished. Accordingly, the newly created law enforcement system of the country remained without a developed system of ranks. For a long time, Soviet police officers had only positions — a police officer, a senior police officer, a security officer, and so on. The situation changed in the middle of the 1930-s, when the Soviet leadership came to the conclusion that it was necessary to streamline both the army and the police hierarchy. In the police, ranks appeared after the Workers 'and Peasants' Red Army and state security agencies. 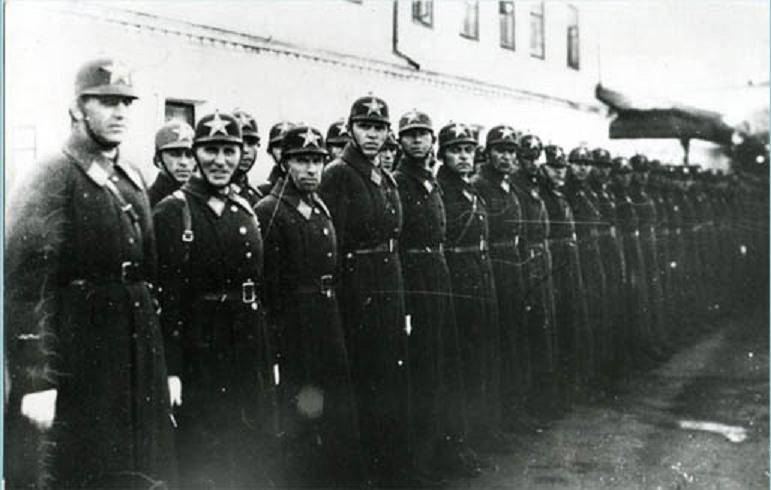 26 April 1936 was adopted by a special Resolution of the USSR Central Executive Committee and the Council of People's Commissars of the USSR, and 5 of May 1936 was announced by a special order of the USSR People’s Commissariat of Internal Affairs No. 157. In accordance with this order, special ranks of commanding and privates were introduced in the Soviet police. They differed significantly from military ranks established in the Red Army. Although many special ranks were consonant with military ranks, in the police they bore a different load - for example, the rank of police sergeant belonged to the commanding staff and corresponded to the rank of lieutenant of the Red Army.

Thus, in 1936, special ranks appeared in the Soviet militia. The rank hierarchy looked like this (incrementally): 1) police officer, 2) senior police officer, 3) separated police commander, 4) police commander, 5) police sergeant, 6) police sergeant, 7) junior police lieutenant, police, 8) police sergeant, 9) , 10) Senior Police Lt., 11) Police Captain, 12) Police Major, 13) Senior Police Major, 14) Police Inspector, 15) Police Director, 15) Chief Police Officer. 1936 June 208 of the year the order of the NKVD of the USSR No. 5 was adopted, in accordance with which new buttonholes and new insignia were introduced for the rank-and-file and commanding personnel of the worker-peasant militia. Buttonholes were sewn on the collar of an overcoat, cloak, tunic or tunic and had the shape of a parallelogram. The buttonhole length along with the edging was ten centimeters, the width - 2,5 centimeters, the width of the edging - XNUMX millimeters. 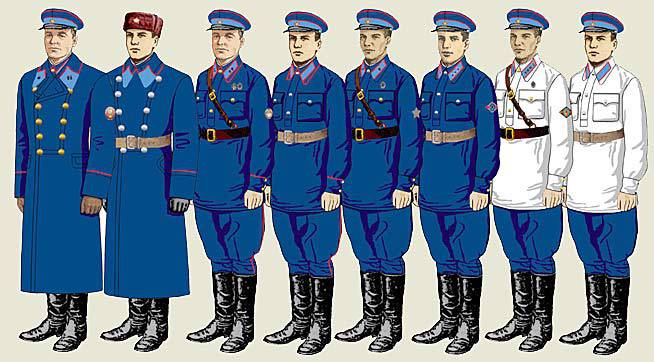 3 July 1936 of the USSR Central Election Commission approved the “Provision on service to be the head of the Workers 'and Peasants' Militia of the People's Commissariat of Internal Affairs of the USSR”. In accordance with it, terms of service, order of dismissal and many other important aspects were established. According to this decree, all special ranks were assigned to the commanding staff of the workers 'and peasants' militia, starting with the police sergeant and above. The terms of stay in each title and the procedure for their assignment were established. Thus, the terms of being a police sergeant, a junior police lieutenant, a police lieutenant and a senior police lieutenant were three years each, the police captain was four years, and the police major was five years. As for the ranks, the senior militia major, the police inspector, the police director and the chief police officer, for them the terms of service were not set and assigned them individually. Early assignment of titles was provided only for great success in service or special merit.

Next in descending "general" rank in the workers' and peasant militia in 1936-1943. there was the title of “police inspector”, corresponding to the rank of state security commissioner of the 3 rank in the state security organs of the NKVD, comcor in the Red Army and the flagship of the 1 rank in the RKKF. In the entire history of its existence, seven people carried its titles - heads of departments and divisions of the Main Directorate of Workers 'and Peasants' Militia of the NKVD of the USSR.

In 1943, the Soviet leadership came to the conclusion that it was necessary to change the existing ranks system in the internal affairs and state security bodies, bringing it closer to the army rank system. 9 February 1943 issued a Decree of the Presidium of the Supreme Soviet of the USSR "On the introduction of new insignia for personnel of the NKVD organs and troops" and "On the titles of the commanding officers of the NKVD and the police". The following special ranks were established in the police, closer to the army and more relevant to them than the previous ranks. However, the differences still remained.

The first rank of police commissioner of the 1 rank was awarded 4 March 1943 to the head of the Main Police Department of the NKVD of the USSR Alexander Galkin. He also turned out to be the only person who bore this highest police rank during the entire time of his existence. By the way, the ranks of police commissioners have existed for thirty years - up to 1973 of the year. 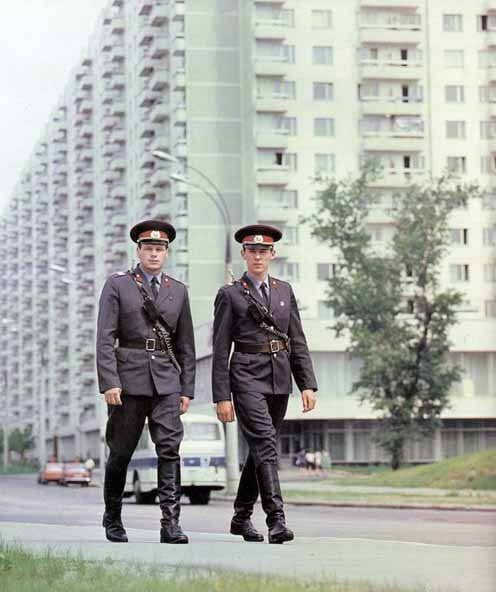 Police Commissioners 2-th and 3-th ranks, thus, were given the rank of lieutenant-general and major general police. Also in the internal affairs bodies parallel special ranks of the internal service were introduced. But, unlike special police titles, in the internal service the title “Colonel General of the Internal Service” was provided. Thus, the title of “Colonel-General of Internal Service” after 1973, turned out to be the highest special title in the system of internal affairs.

The latest change in the ranks system of the Soviet internal affairs agencies was the introduction of special titles "ensign of internal service" and "senior ensign of internal service" in accordance with USSR law of May 17 of 1991. As you know, even 1 January 1972 in the Soviet Army was introduced to the military rank of "ensign", and in the Soviet Navy - "midshipman". 12 January 1981 was also introduced the title of "senior warrant officer" and "senior midshipman." Since the servicemen of the Internal Troops of the Ministry of Internal Affairs of the USSR wore military ranks, the ensigns, and then the senior warrant officers, appeared in the MIA of the USSR. Interestingly, the warrant officers and senior warrant officers who served in special motorized police units, which were a component of the internal troops, but served as a patrol and inspection service, were forced to wear epaulets of police officers when they went on patrol, as The “senior police officer" did not yet exist. The title of "ensign of the police" and "senior ensign of the police" were introduced to the police after the collapse of the Soviet Union - December 23 1992. The same decree introduced the highest title of “Colonel General of Police”, which was absent from the Soviet police.

Ctrl Enter
Noticed oshЫbku Highlight text and press. Ctrl + Enter
We are
Born of revolution. The first steps of the Soviet policeFrom the history of own names of aircraft of Russia, 1885-1917 years
Military Reviewin Yandex News
Military Reviewin Google News
51 comment
Information
Dear reader, to leave comments on the publication, you must sign in.