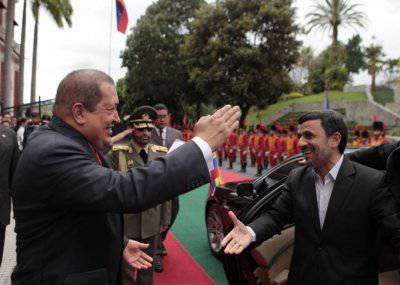 A week-long tour of Latin American countries, which was carried out by Iranian President Mahmoud Ahmadinejad, has caused an unprecedented surge of hatred in the American media bordering on hysteria.

Naturally, in the first place, charges of impending terrorist attacks were rained down. Thus, the well-known Washington Post newspaper reported on the establishment of terrorist groups in Latin America by Ahmadinejad, capable of arranging for the United States the “second eleventh of September” in the event of military action. As evidence, the newspaper charged Iran with organizing bombings in public Jewish organizations in 1992 in Argentina. The Argentine authorities deny such an accusation, but the Washington Post considers it quite logical to use another unfounded prosecution as evidence of one unfounded accusation.

On the eighth of December, the Univisión program rewarded the audience with the film Iranian Threat. The film was intended to expose the preparation of large-scale cyber attacks by Iran and Venezuela on computers of vital US facilities, such as the Pentagon, the White House and nuclear power plants. The spectators were once again frightened by the reminder of the eleventh of September, promising that the consequences of such an attack would be worse.

Andres Oppenheimer, an Argentine political analyst living in the United States, devoted Ahmadinejad more than a dozen articles in which the visit of the Iranian leader to the countries of Latin America is explained by several reasons. Among the standard, aggressively threatening, such as: the creation of terrorist groups, the development, together with Venezuela, of uranium deposits for the Iranian nuclear program, a deliberately rude challenge to the United States. In addition, the political scientist sees a weakness in the behavior of the Iranian president: Iran allegedly found itself in complete isolation, there is a drop in confidence in the government in the country - this de Ahmadinejad forced to earn political dividends on public relations in countries hostile to the United States.

I must say, such a storm of emotions is quite logical surprise, if we recall the fact that Mahmoud Ahmadinejad makes a similar voyage for the fifth time since 2007. And has always been recognized and loved in the ALBA countries. There is nothing surprising in this, besides the general hostility towards the United States, Iran is united with the Bolivarian Alliance, created in 2004 on the initiative of Fidel Castro and Hugo Chávez, by a rather strong economic ties.

Firstly, Iran is a powerful ALBA investor. In the same Venezuela, in five years, with his participation, 27 plants and 14 thousands of houses were built. The banking system is developing, which should provide for settlements between countries in national currencies. Nicaragua is counting on Iran’s support in building small hydropower plants, and investments are planned in various industries, fisheries and agriculture. Ecuador hopes for the joint construction of a refinery. In 2001, Cuba built the largest center of genetic engineering and biotechnology in Iran, and Tehran opened a loan for the country of 700 million dollars.

Secondly, Iran, Ecuador and Venezuela are part of OPEC, as international suppliers of oil. So friendly meetings have always been important, and especially today, when it comes to a possible sharp rise in the price of oil in the event of the overlap of the Ormuzsky duct.
The statements of the ALBA leaders about the predominantly economic accents of the talks are confirmed by the absence of high-ranking military in the Iranian delegation.

Certainly, in part, this obviously inadequate reaction of the American media is explained by the fact that the United States has become accustomed to fighting on foreign territory, moreover, in a foreign, Eastern, hemisphere and is not at all ready to contemplate a serious enemy at its own borders.

However, in the light of some events, unsubstantiated accusations of terrorism are perceived as a red herring. So, a petty crook, hiding a newly stolen wallet in his bosom, screaming at the top of his throat: “Hold the thief!”

As recently as December 4 of last year, the American unmanned reconnaissance aircraft RQ-170 Sentinel, filled with the secret technology "stealth", collapsed to the East of Iran, the exact characteristics of which, as it turned out, are kept in great secrecy. According to Iranian data, the device was shot down, according to the American version - collapsed, having exhausted its fuel reserves. American media have expressed great concern about the fate of secret equipment, incidentally reporting that the CIA intelligence agent belonged. Explanations of how the aircraft was in the Iranian airspace, did not arrive. This was the third incident with a fallen / downed spy plane last year.

On the twelfth of November of last year, the base of the IRGC, which, according to Western media, turned out to be a research center for the production of long-range ballistic missiles, flew into the air as a result of an explosion. Seventeen people were killed, including General Hassan Tehrani Mohaddam, the architect of the Iranian missile program.

Just two weeks later - a powerful explosion in Ifahan. The British "Times" reported that serious damage was done to the uranium enrichment plant intended for the Bushehr nuclear power plant built by the Russian Federation.

Even Western media have noted that over the past two years, more than two dozen incidents have occurred, an assessment of which suggests a planned sabotage against Iran’s nuclear and missile programs.

Two (according to some sources, three) physics were killed and one was missing.

Several hacker attacks were carried out, the loudest of which disabled the centrifuges needed to enrich uranium.

American experts, recognizing the existence of targeted systemic sabotage, nod to Israel, arguing that US law prohibits such activities. It is impossible not to agree with the independent media, who called this explanation a mockery.

According to Iranian state security agencies, at least thirty CIA agents have been arrested by them over the past year.

The aphorism is well-known: "They never lie as much as before the elections, during the war, and after the hunt." In the light of all of the above, it seems that the war has already begun. Perhaps this is another explanation of the particularly intensive activities of the American media.