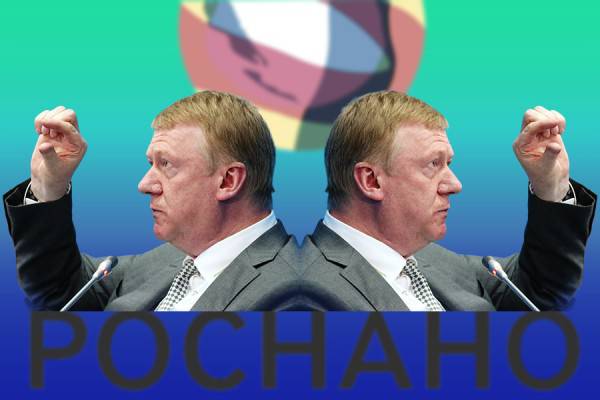 Mr. Chubais promised the Russians for each voucher two Volga, but he prudently traveled on an armored BMW. The new projects of Anatoly Chubais are even more sophisticated, although they lead to the former result. The focus is on the state-owned company Rosnano. The largest technology investor in Russia (annual investment of 100 billion rubles) with its permanent leader represented by Mr. Chubais.

Back in 2011, according to the results of the audit of the state corporation, the auditors of the Accounts Chamber issued a clear and convincing verdict to the mournful undertakings of Anatoly Chubais:

- finances Russian and foreign companies in the framework of nanotechnology, pre-bankrupt;

Of course, Mr. Chubais got away with all this. Over the next five years, he and his legendary “RosBanano” have mastered half a trillion rubles, not getting anything but empty promises at the exit. A detailed acquaintance with the most enchanting and expensive “innovations” from Rosnano clearly convinces that a state-owned company is managed either by completely incompetent people, or by those who use the state-owned company as a screen for activities unrelated to science and technology.

In the autumn of 2009, the country’s television screens flew around a report in which Mr. Chubais demonstrated new domestic chips made using the 90 nanometer technical process (manufactured by Micron, Zelenograd). It was reported that the new technology is designed to replace the previous product “Rosnano” - chips with a step 180 nanometers.

The creators of the report tactfully kept silent about the fact that even before the release of 90 nanometer chips by the head of Rosnano, the leading foreign manufacturers of microelectronics presented processors with 45 nm pitch (for example, Samsung ARM Cortex-A8).

As it turns out later, the “newest” 90-nm technology was acquired from the European corporation STMicroelectronics, which by that time had already mastered the production of chips with the 65 nm topology. Simply put, Mr. Chubais and his henchmen purchased from the STM a deliberately outdated product worth over $ 500 million.

The start of sales of Zelenograd chips with a step of 90 nm was solemnly announced only in ... 2012, when devices that had processors with a step in 32 nm were already offered on the world market. In this situation, you can only sympathize with the specialists of "Micron", who did everything possible on the purchased outdated equipment. But the “buyers” themselves felt great and didn’t regret about the purchase.

Nanoplanet, or Where are e-books for schoolchildren?

In 2011, at a meeting with Prime Minister Vladimir Putin, Mr. Chubais presented a promising Plastic Logic 100 tablet for Russian schools, which was supposed to replace all textbooks of the book sample. To the credit of innovators, with the name of the tablet did not become wise - left the same, from the British company Plastic Logic. 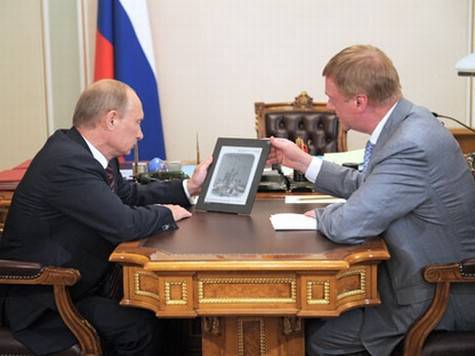 The training tablet was announced back in 2008, however, two years later, Plastic Logic refused to bring its development to the market. Obviously, the company correctly appreciated the commercial success of its new products and the possible risks and inconveniences in the introduction of such a tablet in schools.

However, Anatoly Chubais is not at all embarrassed.

Key issue throughout stories with a nanoplant: for what purpose was the technology acquired in the West that was already recognized as unsuccessful?

What happened to it later (six months later, Mr. Chubais announced the postponement of the project “training tablet” for an indefinite period) and where did the investments in Plastic Logic 150 million rubles go? Probably, searching for answers is meaningless.

Drawn to the sun

In 2007-2011 production and commercial company NITOL with the support of Rosnano (investment volume 4,5 billion) was engaged in the implementation of a program to create domestic solar panels. The original plans looked great:

- on the basis of chemical enterprises in the city of Usolye-Sibirskoe (Irkutsk Region), the creation of an integrated complex for the production of polycrystalline silicon, the main element of solar cells. Design capacity - 5000 tons per year;

- creation of an industrial complex (GK Hevel, Novocheboksarsk, Chuvashia) for the production of solar modules based on polysilicon supplies from the Irkutsk region;

- the final assembly of solar cells at the facilities of the Solar Wind LLC (Krasnodar).

The first samples of polysilicon “electronic” quality were successfully obtained in 2010 year. On this positive news are over.

Despite the efforts of innovators, the production of polysilicon, like the very existence of NITOL, was recognized as unprofitable. In 2012, it was announced the closure of production in Usolye-Siberian. According to Anatoly Chubais, he, as the head of Rosnano, does not have clear parameters for exiting the NITOL project. And where the invested funds were spent remains a mystery. On this note, “Rosnano” and completed its research in the field of solar power.

It is curious that even before the start of production, experts expressed doubts about the quality of the thin-film technology acquired by Rosnano from the Orelikon company. As it turns out later, the technology is really uncompetitive, despite all the loud statements of Rosnano managers.

It should be noted that the imminent NITOL bankruptcy occurred at a time of explosive growth in demand for solar batteries around the world. It was at that auspicious moment when this industry was becoming a new trend that any company dealing with solar energy issues could count on large profits.

It is simply surprising that the shareholders' lawsuit against Chubais and Rosnano (April 2015) states “intentional destruction of the chemical plant in Usolye-Sibirsky”.

In 2011, in the Novosibirsk region, in the territory of the warehouse and industrial park “Tolmachevo”, mass production of lithium-ion batteries was launched. The volume of joint investments of Rosnano and the Chinese Thunder Sky Grroup amounted to 14,8 billion rubles. The declared production capacity is over 1 GWh, or one million batteries per year, which could make Liotech a world-class player in the dynamically developing lithium-ion battery market. 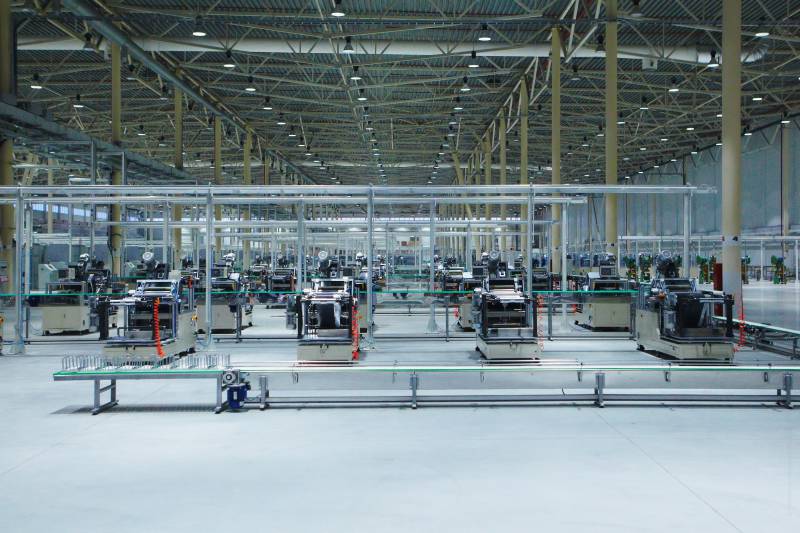 Today, the most popular requests on the Internet, issued by the tag “Liotech”, are “salary” and “bankrupt”. The fact is that in January 2016, the arbitration court of the Novosibirsk region began the process of bankruptcy of the Chubais miracle plant.

Apparently, realizing the true goal of this enterprise, the Chinese partners fled with Liotech back in the 2013 year. Since then, according to the workers themselves, production has practically stopped there.

“Now nothing is produced there. Back in the days of cooperation with the Chinese, 1000 batteries were made, as they are there. Then they made some cases for different devices on the cheap, but nothing went for sale. I came in the morning, carrying pallets with some trash with other mechanics back and forth ... " (Andrey Kashnikov, former mechanic “Liotech”, from an interview with “Komsomolskaya Pravda”, 2016)

At the same time, few potential customers express displeasure at the pricing policy of the manufacturer of nanoaccumulators (cheaper to order in China), as well as inadequate work of the customer service department (the inability to look at the product “live”, referring to a certain “mode” and “ secrecy"). To see the battery is allowed only after registration and payment of the order.

The moral of the story with “Liotech” is by no means the next regular demise of the enterprise, to which Rosnano and A. Chubais put their hands. The main question is the purpose of creating a huge industrial complex and the injection of investments in the amount of 7,5 billion rubles. In the absence of clearly defined markets and any assessment of the demand for the products of the miracle factory.

A similar story happened with “Optogan” - another ward “Rosnano”. In St. Petersburg, the largest plant in Eastern Europe for the production of high-brightness LEDs was built, designed to produce 360 million LEDs per year. The volume of investments - 3,35 billion rubles.

2015 year. “Optogan” is a complete bankrupt. By the decision of Rosnano, Optogan is abandoned by its creators - physics scientists Maxim Odnoblyudov, Alexey Kovsh and Vladislav Bugrov.

Any enterprise is created based on the assessment of its profitability. A new high-tech production, not yet secured by sales markets, begins with a modest shop, which, with proper marketing policies, demand development and investment, gradually grows to a whole group of companies, with the advent of new production lines at different ends of the country.

Instead of all this, the largest amounts of funds were invested in new productions, and then everything was done to stall these enterprises. The purpose of such manipulations is too obvious: while there is an opportunity, withdraw funds from the budget and grab the largest jackpot on the construction site. How the company will function, as well as the entire high-tech industry as a whole, does not care about effective managers.

"I am a normal person. I understand that this is hard to believe, but believe it" (A. Chubais in an interview with Kommersant, 2013)

Tablet, NITOL, Liotech, Optogan, accusations of raider seizure of Hi-tec production (scandal with SUN, 2013), inquiries from deputies and the results of inspections of the Accounts Chamber, indicating activities related to a flagrant violation of the legislation of the Russian Federation. The list of actions of Anatoly Chubais as the head of Rosnano is drawing on numerous volumes of the criminal case. It's amazing how, after all the setbacks, Mr. Chubais manages to maintain political weight and remain in the post of one of the most important and capital-intensive Russian state corporations!

Ctrl Enter
Noticed oshЫbku Highlight text and press. Ctrl + Enter
We are
Will we see profits from nanotechnology?New plants and workshops in Russia in 2015 year
Military Reviewin Yandex News
Military Reviewin Google News
118 comments
Information
Dear reader, to leave comments on the publication, you must to register.