Sergey Kapitsa: How Russia is turned into a country of fools

23 September 2016
131
The words from the title were said by Sergey Petrovich back in 2009 year, in an interview with the newspaper AIF. The theme of the spiritual, cultural and moral degradation of generations in Russia was especially close to him. The son of the Nobel Prize winner Pyotr Leonidovich Kapitsa, a Soviet and Russian physicist and enlightener Sergei Petrovich Kapitsa for most of us needs no introduction. 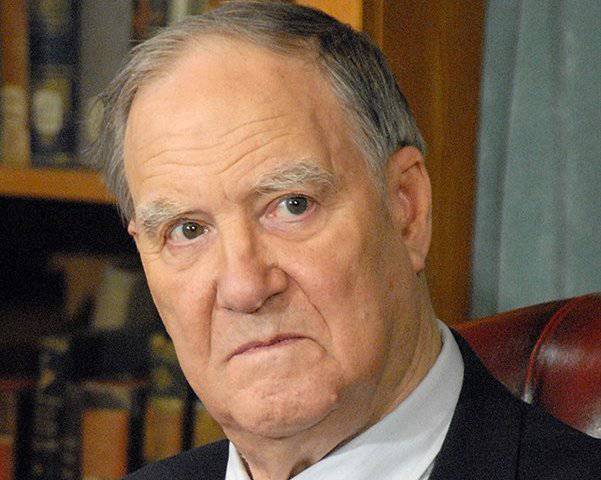 But back to the words of Sergei Petrovich, he said in 2009 year, because they turned out to be prophetic. 2016 is the year of the year, and the generation of modern youth still reads less and less Russian classics, no longer clearly writes, ink, pens, books were replaced by gadgets and mobile applications. The generation of mobile and self-confident, informed and pseudo-progressive people, with their heads gone into the digitized world, easily replaced the real one, where there is no place for feelings and emotions.

Sergei Petrovich repeatedly shared his thoughts about the modern generation, and also often explained the difference between the generations.

We have collected the most important, in our opinion, excerpts from an interview with great thinker Sergei Petrovich Kapitsa and try to understand whether something has changed from 2009 to 2016 a year?

Background: In 2009, the All-Russian Center for the Study of Public Opinion (VTsIOM) conducted research that the authorities did not notice. And in vain. Their results are such that at least two ministries - culture and education - need to press all the “panic buttons” and collect emergency cabinet meetings. Because, according to polls VTsIOM, 35% of Russians DO NOT READ A BOOK AT ALL! But Russia, according to the speeches of the President and the Prime Minister, took the path to innovative development. But what innovations, scientific breakthroughs, the development of nanotechnology, etc., can we talk about if more than a third of the country's population has never picked up a book in their hands in a year? In this regard, in the 2009 year, the AMF newspaper interviewed Professor S.P. Kapitsa a short but detailed interview.

Here are excerpts from this interview:

“Russia is being turned into a country of fools”

“The VTsIOM data show that we finally came to the point that all these 15 years were striving for,” brought up the country of idiots. If Russia will continue to move along the same course, then in another ten years there will be no those who today at least occasionally take up a book. And we get a country that will be easier to rule, which will be easier to suck the natural resources. But there is no future for this country! These are the words I uttered five years ago at a government meeting. Time passes, and the processes that lead to the degradation of the nation, no one even tries to understand and suspend.

We have a complete breakdown of words and deeds. Everyone talks about innovation, but nothing is done to get these slogans started. And the explanations “I work so much. When should I also read? ”Cannot serve as an excuse. Believe me, our generation worked no less, but there was always time for reading. And the labor productivity in the society several decades ago was higher than now.

Today, almost half of able-bodied young people work in security organizations! It turns out that all these young guys are stupid, limited people who can only beat their faces? ”

Why should a man read?

“You ask why a person should read at all. Again, I’ll give an example: human and monkey organisms are very close in all their characteristics. But monkeys do not read, but a person reads books. Culture and mind - this is the main difference between a man and a monkey. And reason is based on the exchange of information and language. And the greatest information sharing tool is the book.

Earlier, starting from the time of Homer, there was an oral tradition: people sat and listened to the elders, who in artistic form, through the legends and legends of past eras, passed on the experience and knowledge accumulated by the generation. Then a letter arose and with it a reading. The tradition of oral tale has faded away, and now the tradition of reading is also fading. Take somehow and at least for the sake of curiosity look through the great correspondence.

Darwin's epistolary heritage, which is now being published, is 15 thousand letters. The correspondence of Leo Tolstoy also takes more than one volume. And what will remain after the current generation? Will their text messages be edited for posterity? ”

The role of the exam in education

“I have long proposed to change the criteria for admission to higher education. No exams are needed - let the applicant write a five-page essay in which he explains why he wants to enter a particular department. The ability to correctly express their thoughts, the essence of the problem demonstrates the intellectual baggage of a person, the level of his culture, the degree of development of consciousness.

And the USE, which is being used today, cannot provide an objective picture of a student’s knowledge. It is built only on the knowledge or ignorance of the facts. But the facts are not all! Does the Volga flow into the Caspian Sea? The answer to this question deserves not a tick in the appropriate box, but a separate serious conversation. Because millions of years ago, the Volga did not flow into the Caspian Sea, but into the Sea of ​​Azov, the geography of the Earth was different. And the question from a textbook turns into an interesting problem. To solve it, it is just that an understanding is needed, which is impossible to achieve without reading and education. ”

Feelings instead of minds

“... The question of losing interest in reading is the question of what is happening to people now. We rested at a very difficult moment in the development of mankind as a whole. The pace of development of technology today is very high. And our ability to comprehend all this and reasonably in this technical and information environment to live from these rates lags behind. The world is now experiencing a very deep cultural crisis. So the situation in our country is quite typical for the rest of the world - in America and in England too little is read. Yes, and such a large literature that existed in the world of 30-40 years ago, today is no longer there. Now it is very difficult to find the rulers of the minds at all. Perhaps because no one needs minds - sensations are needed.

Money is not the goal of the existence of society, but only a means to achieve certain goals.

You can have an army whose soldiers will valiantly fight without demanding rewards, because they believe in the ideals of the state. And you can have the service of mercenaries, who with equal pleasure will kill both their own and others for the same money. But they will be different armies!

And in science, breakthroughs are made not for money, but for interest. Such a feline interest! And with the big art is the same. Masterpieces for money are not born. If everything is subordinated to money, then everything will remain with money, they will turn into neither a masterpiece nor a discovery.

In order for the children to start reading again, an appropriate cultural setting should be formed in the country. What defines culture now? Once the Church was setting the tone. On a day off, people went to the temple and instead of watching TV, they looked at murals, icons, and stained glass windows - at the illustration of life in images. Great masters worked on the order of the Church, a great tradition consecrated it all.

Today, people go to church much less, and a generalized picture of life is given by television. But no great tradition, no art here. Nothing but massacre and shooting, you will not find there. Television is engaged in the decomposition of people's consciousness. In my opinion, this is a criminal organization subordinated to antisocial interests. There is only one call from the screen: “Enrich yourself by any means - theft, violence, deception!”

The issue of cultural development is a question of the future of the country. The state will not be able to exist if it does not rely on culture. And it cannot only strengthen its position in the world with money or military force. How can we attract our former republics today? Only culture! In the era of the USSR, they existed perfectly within our culture. Compare the level of development of Afghanistan and the republics of Central Asia - the difference is huge! And now all these countries have dropped out of our cultural space. And, in my opinion, the most important task now is to return them to this space again.

In France, there is the Ministry of Francophonie, which promotes the cultural policy of France in the world. In England, the British Council is considered a non-governmental organization, but in fact it has a clear policy for the spread of English culture, and through it - global English influence in the world. So, cultural issues are intertwined with the issues of politics and national security of the country. This essential element of influence cannot be neglected. In the modern world, science and art, rather than resources and productive forces, determine the power and future of the country.

At one of his last meetings with the audience, Sergei Petrovich admitted:

“20 years ago, it seemed to me that the main problem on our planet was the problem of the world, because we were armed to the teeth, and it is unknown where this military force could lead us. Now, it seems to me, we need to turn to the very essence of our being - to the growth of the population, to the growth of culture, to the goals of our life. The world, and not only our country, is experiencing a profound change in its development; neither politicians, nor most people understand this. Why does this fracture occur, what is it connected with, how to influence it, how to react? Now people need to understand this, because before you act, you need to understand. When I understand, I will definitely tell you.

Now do we understand ourselves, without him?

Sergey Petrovich Kapitsa was an outstanding personality. He belonged to the category of people changing this world for the better. Wise, ingenious people want to listen for days, listen to their life experiences, judgments, thoughts, inspired by ideas to introduce the best in their lives - such people will not advise the bad, they will not teach the bad. Sergey Petrovich lived a long, rich life, died in Moscow on August 14 2012, at the age of 84.