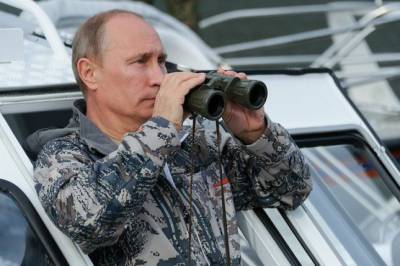 In a discussion of the article “Putin Tavrichesky,” it struck one comment: why is there not a word about Donbass? A fair remark, if we are talking about the Crimea, then we must also say about the Donbass, remember the militiamen and civilians of the Donbass who fell at the hands of Bandera: they shed blood for the Crimea!

On the hard question you need to give the same answer: to avoid a war with Europe and the United States, which stood behind Bandera, avoid the scenario of Zbigniew Brzezinski. There was a serious risk of a big war in Europe, this risk forced Moscow to abandon the introduction of troops to Ukraine, and Paris and Berlin led, in fact, to separate Minsk agreements with Moscow. Western humanism has nothing to do with it: after all, official Europe still doesn’t see Bandera’s Nazis. But ... Moscow did not come to such a formulation of the question immediately.

After an unprecedented sabotage act near its borders: the pro-American and Bandera coup in Kiev on February 22.02.2014, XNUMX, Moscow was preparing for the worst. Preparing for war, a great war with the West, led by Washington. To do this, it was necessary, at all costs, to occupy a key military-strategic position on the Black Sea, take the Crimea, save its Russian population and base fleet in Sevastopol - it was a two-fold task, it was obvious, and carried out without hesitation: it was preparation for war!

I remember the alarm in my heart in the spring of 2014, when the announcer read out reports about the exercises of entire military districts, and the Federation Council allowed Vladimir Putin, as commander-in-chief, to send troops to Ukraine, where the Russian spring flourished in the southeast, and the first clashes with Bandera began.

Then it became clear that the West “swallowed” the Crimea: Europe itself is afraid of war in its own yard, afraid of the “Ukrainian Afghanistan” conceived by Brzezinski, and Russia refused to send troops to Ukraine and to the Donbass. There were other calculations.

The euphoria of a successful, allegedly anti-corruption, coup in Kiev has affected large masses of the population in Ukraine, and there was still hope that the wave of euphoria will subside, and it will still be possible to agree that not everyone in the new Kiev government is the Nazis-Bandera. Reading about the Odessa Khatyn, one Kulikov’s words about the causes of the tragedy were pricked: we didn’t think that they would kill us, otherwise they would have acted differently. These hopes were not only among the Kulikovs, it did not immediately become clear that they were absolutely false.

The fact that Bandera came to the South-East of Ukraine just to kill, it became obvious to all after the Odessa Khatyn. When the murders of the Nazi battalions became the state policy of the Maidan regime, when, at the suggestion of Washington’s emissaries in Kiev, ATO was declared ... Then Vladimir Putin publicly stated from the rostrum that Russia would not allow the Donbass to be cut out, and he kept that word in Donetsk , and in Lugansk: Bandera in the Donbas got into the "boilers" ...

Much has been said that the events in the Crimea had a great influence on the Russian spring in the Donbas, however, not only by its example: the Crimea also created conditions for it. In the Crimea, after all, the best, shock grouping of the Armed Forces of Ukraine was concentrated, as in the most unreliable, dangerous region. Its defeat, albeit bloodless, shook the military machine of Kiev, eliminating the danger of war during the referendum in the Donbas. Bandera Kiev really had to create its armed forces from scratch, and most of the generals for them came from the Crimea, but without troops!

How many were then predictions about the defeat of the militia of the Donbass APU-they all failed. Because Putin feels his responsibility for the Donbass, and in general for Novorossia, he remembers this word, so he put a candle on the camera in the Moscow region church in memory of all those who died in the Donbass ...

... Permission to bring troops into Ukraine was withdrawn by the Federation Council, apparently, with the filing of Yevgeny Primakov. Such a conclusion can be drawn from the plots that flashed on our TV, where Primakov speaks about the unpreparedness of the economy and the military industrial complex to work in a military mode, which is necessary for at least two years to ensure critical import substitution, to patch holes in the country's defense. Recall that the C-300 complex covered the Navy base in Petropavlovsk-Kamchatsky only in the summer of 2015. Today, C-400 production capacity is at least doubled.

The Bandera revolution, under the American administration, the coup d'etat in Kiev — it was a reception of a hybrid war, or a color revolution, to respond to it with the introduction of troops — meant to substitute for a hybrid and propaganda blow of the West. And Putin, perhaps, on the advice of Primakov, dwelt on the hybrid answer: effective assistance to Donbas without the introduction of troops.

In other words, in 2014, Russia was not ready for a big war with the West, finding itself in the situation of 1941. When the West "swallowed" the Crimea and the opportunity arose to delay the time, Moscow went for it. However, already Minsk-2 was concluded under the dictation of Moscow, so the Bandera regime does not want, and can not execute it.

The two years requested by Primakov passed, and the situation changed fundamentally: Russia "closed" its borders with the VKS, and even entered Syria. And Putin's statements about the Bandera regime are becoming tougher, and, most likely, they will be tightened further. Putin has already refused to talk to Poroshenko’s “cynical Bandera” after sending saboteurs to Kiev in the Crimea, although unsuccessful. Why?

Caught saboteurs became the pretext for blaming Bandera in "terrorist methods". This was a surprise not only for Kiev, but also for its patrons in the West, who immediately began talking about the disproportion of the charges: they did not blow up anything. In Donetsk and Lugansk, Bandera saboteurs were noted more than once, but they got away with it, they probably thought that they would get away in the Crimea ...

Actually, there is only one explanation why Moscow reacted so harshly to the saboteur sally in the Crimea: she saw this as a reason for imposing sanctions against the “cynical Bandera”. In any case, with Turkey, after Su-24 was shot down, Moscow acted in this way.

As a result of the investigation into the saboteurs case, and the end of the G-20 in China, Moscow will apparently impose some kind of sanctions against Bandera for non-compliance with the Minsk agreements: with this, Moscow will declare that they are not being implemented precisely by Kiev.

Poroshenko is concerned about this, and Europe understands this, and is trying to reanimate the “Norman format,” that is, to restore Poroshenko’s relationship with Putin. However, this does not work out, and European Commissioner Marosh Shefchovich is proposing to resume the trilateral negotiations with Kiev on gas, which Moscow also ignores. Finally, the “cynical Bandera” stopped the shelling from September 1, and released the prisoners to 7 on their own initiative, without exchange, an unprecedented step for him.

Will Putin meet at least somehow? Soon we will find out, however, more likely sanctions. The most obvious option, perhaps, is the termination by Moscow of a visa-free regime with Kiev, there is an iron reason for this: the saboteurs drove into the Crimea to plan sabotage, using the visa-free regime.

The past will not be returned ... Artillery shelling exhaust residents of Donbass, but the resumption of hostilities will lead to even more blood and destruction. Bandera understands this, and, posing as a victim, dreams of Russia's offensive from the "eight directions", projecting its intentions to Russia in the Donbas. But Russia does not need this at all, if only because it has not yet fully used economic measures of influence.

You can agree with the publicist Dmitry Dzygovbrodsky (http://rusvesna.su/recent_opinions/1472550789), when he says: “Until Ukraine finally poison itself with Ukrainian integral nationalism, until all the superstructures and the very basis of Ukrainians are destroyed, this territory cannot be touched . Let him die. Bandera must commit suicide ...

Ctrl Enter
Noticed a mistake Highlight text and press. Ctrl + Enter
We are
The railway bypassing Ukraine will be in 2017!"Polite people" in the Crimea through the eyes of Americans
70 comments
Information
Dear reader, to leave comments on the publication, you must to register.