After the Second World War, during which various types of weapons were adopted by the belligerents, a situation arose when there were weapons of different caliber in existing armies. The situation was aggravated by the fact that cartridges of different lengths were used with the same caliber. It did not meet uniform standards. The concerned agencies of all the states participating in the past hostilities have set a clear task for the designers to create uniform weapons, in particular a single machine gun, which will be discussed in our article. The most productively this problem was solved by the designers - the US armed forces. But they also had problems with entering this weapons on the mass armament of military units.

The need to create a single machine gun

After the tests were carried out by the army of the North American states, the sample Т161Е2 was supplied, which was introduced into the US Army under the abbreviation М60.

Initially it seemed that this powerful and modern weapons, however, the designers overdid it with its characteristics.

As a result, the main quality of the machine gun suffered - its reliability, with prolonged use, there were frequent cases of machine gun flaws, which began to be “understood” spontaneously, which was by no means the best characteristic in combat operations. In addition, the presence of direct fastening thrust mechanisms (bipods) on the barrel when firing caused the replacement of the barrel when overheated product became just a disaster. There were other drawbacks, such as the unauthorized opening of firing with a strong wear of mechanisms, the possibility of improper installation of the vapor mechanism in a heated state, etc.

By the way, to be honest, on the basis of М60, lightweight products М60Е3 and М60Е4 were made, which took into account the previous drawbacks. Now these machine guns are in the state of the weapons divisions of the "Rangers" and "berets" of US special forces.

The Soviet government set the task of creating a unified machine gun for the USSR Armed Forces before the USSR Ministry of Defense Army, and the best specialists - designers of our Motherland were sent to fulfill this task.

The task set by the USSR Government was extremely concise: to create a maximum of one and a half machine gun for the USSR Armed Forces during the year. There was no time to develop and test prototypes, and the talented Russian gunsmith Nikitin GI It follows the path of least resistance: it takes as a basis the American unfinished version М60, which has already been used in Vietnam, carries out the necessary modernization and presents the sample for testing.

The Kalashnikov design bureau received a similar task, which even then, foreseeing the market demand for a single machine gun, worked on the creation of the well-known PKM machine gun.

From 1962 to 1967 year G.I. Nikitin, in close collaboration with Yu. M. Sokolov and V. S. Degtyarev, developed the 7,62-mm lightweight single machine gun TKB-015, as well as various options for easel devices, bipods, light machine-gun tape of the closed type, both from steel and steel. and plastic, including ammunition boxes. Nikitin's product was distinguished by its small mass, weighing just a little more than 6 a kilogram. 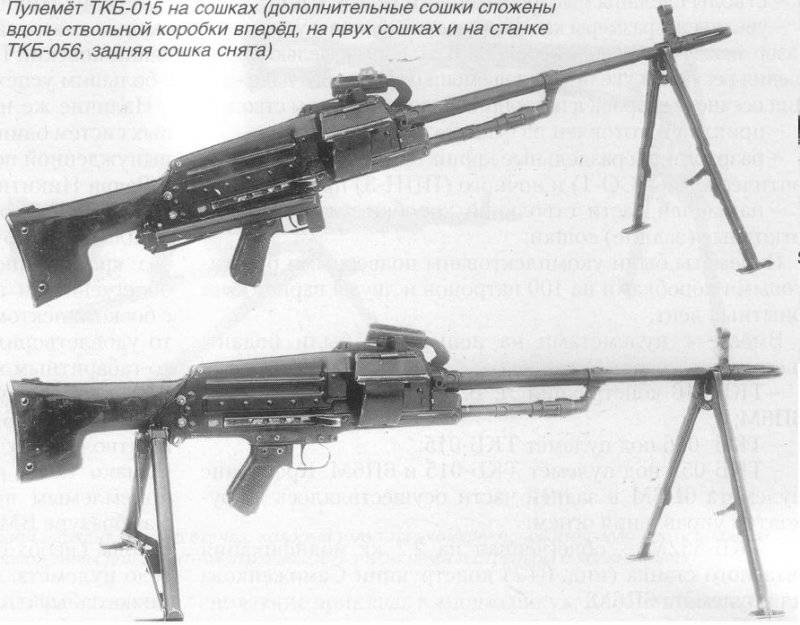 Features of this machine gun

The design features of this machine gun are in no way connected with the previous inventions of this talented creative team. First of all, it concerns the gas exhaust mechanism, the main constituent element in the production of a shot. With the fixed barrel part, the powder gases escaped through a hole in a rigidly fixed barrel, which was connected to the box of the barrel part on four screws. An artillery wedge bolt has been used, which locks the barrel channel, entering the connection with the slots in the rear part of the barrel mechanism.
With USM - no new developments, taken version of the hammer type. The shot production mechanism is used only for automatic fire; single shots are not provided. Ammunition is fed from the SGM machine gun belt. The sleeve is thrown forward, the extractor mechanism is under the barrel.

The official reasons for the rejection of this single machine gun - its unreliability when shooting in frosty and rainy time. When conducting tests, TKB-015 gave misfires at low temperature and during precipitation in the form of rain and sleet. As for the fire characteristics of TKB-015 and PKM, they are about the same. According to testers, TKB-015 didn’t like dustiness, because its details were lightweight, and PCM passed the exam in any active media.