August 24 2016
8
24 August marks the 170 anniversary of the death of Russian navigator Ivan Fedorovich Kruzenshtern. Ivan Fedorovich Kruzenshtern (birth name - Adam Johann von Kruzenshtern) was born on November 19 of 1770, died August 24 of 1846 of the year. This is a famous Russian navigator, admiral. Kruzenshtern became the leader of the first Russian round-the-world expedition, he first mapped most of the coast of Sakhalin Island, became one of the founders of the Russian Geographical Society. Today it is named after the strait in the northern part of the Kuril Islands, the passage between the island of Tsushima and the islands of Iki and Okinoshi in the Korean Strait, a mountain on Novaya Zemlya, an island in the Bering Strait and the Tuamotu Archipelago.


No doubt Ivan Fedorovich Kruzenshtern was unique historical personality, was one of the founders of Russian oceanology. He had a significant impact on the history of Russian naval expeditions, and in general on navigation. His brief biography is found in all textbooks today; it is held in all special educational institutions of Russia. Today it is a name that is familiar to each and every educated person in our country. It is inextricably linked with Russian geography and oceanology.

Ivan Kruzenshtern comes from the Eastern nobles. He is a descendant of a noble family Russified Kruzenshtern, great-grandson of the founder of Russia's Philip Krusius von Krusenstern, the son of the judge Johann Friedrich von Kruzenshtern (1724-1791) and Christine Frederick, nee von Toll (1730-1804). After five daughters in their family, Karl Friedrich (1769-1847) was born, and, finally, Adam Johann himself, who became the seventh child in the family. 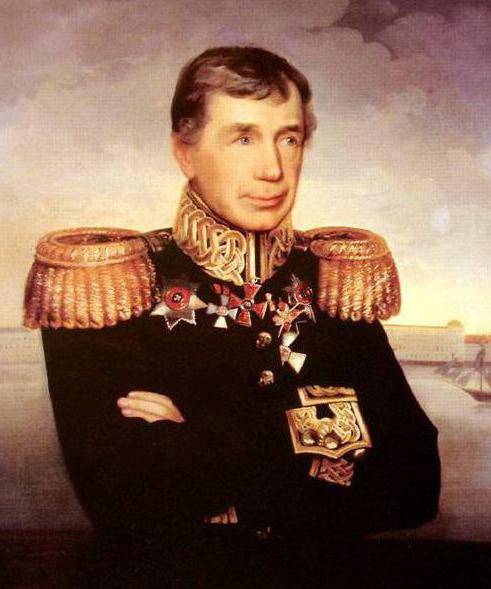 Since 12 years, Kruzenshtern studied for three years in a city school at the Dome Cathedral in Revel (present-day Tallinn), and then continued his studies at the Naval Cadet Corps in Kronstadt. In 1787, he was promoted to midshipmen. It should be noted that since childhood, the future navigator and admiral dreamed of going around the globe by sea. This is the rare case when the childhood dream really came true, although it was far from being possible to realize it.

In 1788, in connection with the outbreak of war with Sweden, he was early released from the Naval Cadet Corps and promoted to midshipmen, having been assigned to the 74-gun ship Mstislav. 6 July 1788 of the year in the Gulf of Finland, at a distance of 50 kilometers west of the island of Gogland, a meeting of two squadrons - Russian and Swedish. Squadron lined up - one opposite the other. At the same time, the movement of ships was seriously hampered due to the lack of wind. In fact, the Russian and Swedish ships targeted each other for several hours.

The Russian squadron lost in this battle more than 300 people killed and more than 600 wounded. The 74-gun ship Mstislav suffered the most in the battle. This ship almost lost control, the ship was badly damaged by Swedish cannon fire, but remained in service until the end of the battle. Both sides appropriated the victory in the battle of Gogland to themselves, although their losses were approximately comparable. The Swedes surrendered 60-gun ship "Prince Gustav", in the Russian squadron the flag was forced to lower the 74-gun "Vladislav", whose team lost 260 people. If we talk about a strategic outcome, the victory here was for the Russians. The Swedish fleet was forced to retreat and take refuge in the fortress Sveaborg. Swedish plans to wage war were frustrated in the first naval battle. 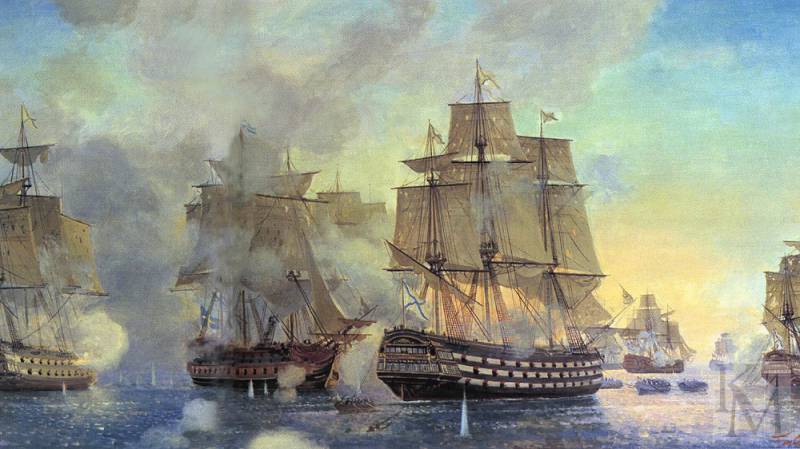 In the pursuit of Swedish fleet and the blockade of Sveaborg, which lasted until late fall, the seriously damaged Mstislav took part. Almost all the officers were killed or wounded on the ship, so Midshipman Kruzenshtern was appointed assistant commander of the Mstislav. Having distinguished himself in the Battle of Hogland, already in 1789 Kruzenshtern took part in the Öland. Among the few losses of the Russian squadron in this battle, the death of the commander of the 74-gun Mstislav Grigory Ivanovich Mulovsky, who was preparing to make the first round-the-world voyage in Russia, was subsequently destined to be made by Kruzenshtern, who served on the same ship. In 1790, Ivan Kruzenshtern participated in naval battles at Revel, Krasnaya Gorka, and also Vyborg Bay. After these battles, he was promoted to lieutenant at the age of 19.

In 1793, Ivan Kruzenshtern was among the 12 Russian honorary officers who was sent to England with the aim of improving maritime affairs and skills. At that time, England firmly held the title of the greatest maritime power. With the British, Kruzenshtern went to the shores of North America, where he participated in battles with the French. During this trip with the British, he visited Barbados, Bermuda and Suriname. To explore the East Indian waters and open trade routes to the East Indies for Russia, Krusenstern visited the Bay of Bengal. Interested in Russian fur trade with neighboring China, which was conducted from Okhotsk by land route to Kyakhta, Ivan Fedorovich decided that if trade were conducted directly by sea, it would be much more profitable. He also planned to establish direct relations of the metropolis with the Russian possessions located in America in order to be able to supply them with all the necessary supplies. In 1799, in St. Petersburg, Ivan Krusenstern presented his vision, but his project was rejected. At the same time, in the 1802 year, the head office of the Russian-American company came up with a similar proposal; this proposal was satisfied by the Russian emperor Alexander I. For its execution, the first Russian round-the-world expedition was equipped. That is how the childhood dream of Krusenstern came true.

In total, the first Russian round-the-world expedition, which forever entered the history of our country, included two ships: the Nadezhda and the Neva. “Nadezhda” was commanded personally by Kruzenshtern, “Neva” - another famous Russian sailor, captain-lieutenant Lisyansky. Around-the-world voyage began on August 7 of the year 1803 with the departure of ships from Kronstadt. Their path ran across the Atlantic, 3 March 1804, they circled Cape Horn. Of the Russians and their neighboring lands in the North Pacific, the participants of this expedition paid special attention to Sakhalin, Kamchatka and the Kurile Islands. Round-the-world voyage ended in Kronstadt 19 August 1806.

During the expedition, Kruzenshtern conducted a large amount of various studies, the results of which can be summarized as follows:

- geographic maps have been significantly corrected; deep-sea studies of the World Ocean were carried out (determination of the specific gravity and salinity of water, temperature measurement at different depths, determination of the velocity of currents, etc.);

- the western coast of Japan, the eastern coast and the southern part of Sakhalin were mapped, a part of the Kuril Islands was explored;

- a new route to the Russian possessions located in Kamchatka and Alaska was established.

Ivan Fedorovich not only discovered and mapped many islands, described part of the northwestern coast of the Pacific Ocean and compiled its first atlas, but also became one of the founders of oceanological research. The round-the-world expedition under his command gathered rich ethnographic, botanical, zoological collections, and also conducted a large number of astronomical observations. In his notes on the world tour, Kruzenshtern told a lot of new and curious about what he saw in the voyage, especially about the nature and life of savages. For his time, the atlas of the Pacific Ocean compiled by him was magnificent; he was full of plans, maps, and drawings. Lisyansky, who controlled the second ship of the expedition, the Neva, sometimes went separately from the Nadezhda. In his book about the same world tour there was a detailed description of the shores of Kodiak and Sitka.

According to contemporaries Ivan Fedorovich, he was quite prominent in his environment. Krusenstern was distinguished by his athletic build, and by his heroic chest and shoulder girdle he was superior to all participants of the round-the-world expedition. Interestingly, during the voyage, he, despite the bewilderment of his colleagues, carried weights with him, and worked with them every day. His favorite exercise was the Schwung bench press. With double-pudding (32 kg) kettlebells, Krusenstern exercised every day, giving these classes approximately 30-40 minutes.

In the 1811 year, Ivan Kruzenshtern was identified as an inspector of classes of the Marine Cadet Corps. In the 1814 year, he developed a detailed instruction for the 1815-1818 round-the-world expedition under the command of Kotzebue, one of the junior officers of the first Russian round-the-world voyage. Krusenstern also visited England in order to order the necessary tools for the expedition. Returning back to Russia, he received indefinite leave, devoting him to the creation of the Atlas of the South Sea. His work, which was published in Russian and German, was soon translated into French, and then into all European languages ​​without exception. This work Krusenstern was awarded the full Demidov Prize. 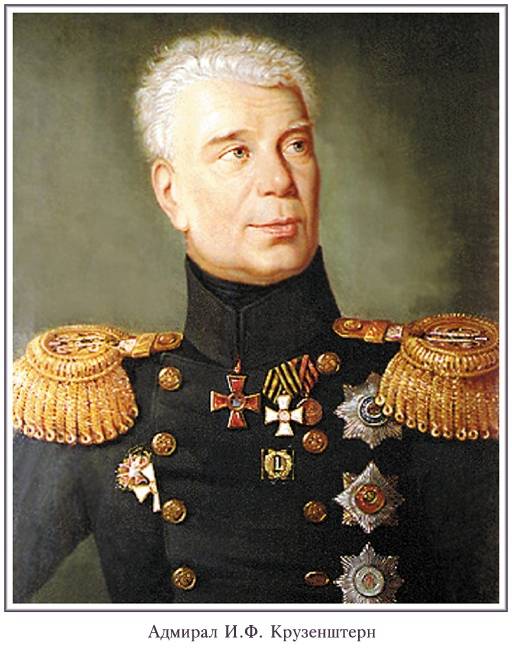 A curious detail is that at the beginning of World War 1812, the Krusenstern, being a poor man, donated a third of his fortune to the people's militia. For those times it was a large amount - a thousand rubles. In the same year, 1812, Kruzenshtern published a three-volume book of his own essay “Journey Around the World ...”, and in 1813, he was elected a member of many scientific societies and academies around the world, including in England, Germany, Denmark and France.

In 1827, Ivan Kruzenshtern was appointed Director of the Naval Cadet Corps and became a member of the Admiralty Council. As director of this educational institution, which he himself had once successfully graduated from, he spent long 16 years. His activity at that time was marked by the introduction of new subjects into the courses of the Marine Corps, the enrichment of the library and the museum of the educational institution with numerous textbooks. It was also during this period that the Higher Officer Classes were created and approved, which would later be transformed into the Naval Academy. Under Ivan Fyodorovich, the corporal punishments of pupils were completely abolished in the Naval Cadet Corps.

In 1842, with the rank of admiral, Ivan Krusenstern resigned. Leaving the service, he went to his estate, but here the famous navigator continued to work. In 1845, together with such Russian scientists as: F. P. Wrangel, F. P. Litke, and K. M. Baer Krusenstern, he was directly involved in the creation of the Russian Geographical Society. After some time, this society has become one of the largest centers of geographical sciences not only in the Russian Empire, but throughout the world.

Ivan Kruzenshtern died 24 August 1846, on his estate Asa at the age of 75 years. The navigator was buried in Revel in the Vyshgorod (Dome) church. But his son continued his work, Pavel Ivanovich, and then his grandson, Pavel Pavlovich. Both of them became famous travelers who explored the north-eastern shores of Asia, the Caroline and other islands of the Pechersk region and the Ob region of North.

We are in Yandex Zen
How did Russian America begin
Sons of ivan
8 comments
Information
Dear reader, to leave comments on the publication, you must to register.