August 24 2016
31
The Ministry of Internal Affairs of Russia buys robotic systems called the Sphere. These complexes can conduct reconnaissance and transmit information from dangerous and difficult for human places, as follows from the information that was posted on the public procurement portal. In June 2016 of the year, the Ministry of Internal Affairs of Russia announced an auction for the supply of 6 sets “Sphere” for a total amount of 7 million rubles; only one company applied for participation - SET-1 JSC (Moscow), which is the creator and manufacturer of special technical equipment (CTC) ) to ensure operational and investigative activities.


SET-1 has been operating in the security market since 1992. The specifics of the company's work suggests that its main customers are the Ministry of Internal Affairs, the Federal Security Service, as well as other subjects of operational-search activity of the Russian Federation, CIS countries, as well as their similar structures. A special place in the company's product line is occupied by anti-terrorism equipment: equipment for video surveillance in dangerous conditions and special inspection robots for work in hard-to-reach areas with the transmission of video and audio information over the air. Robotic complexes of anti-terrorism application development specialists "CET-1" are represented by devices "Sphere" and "Scarab". 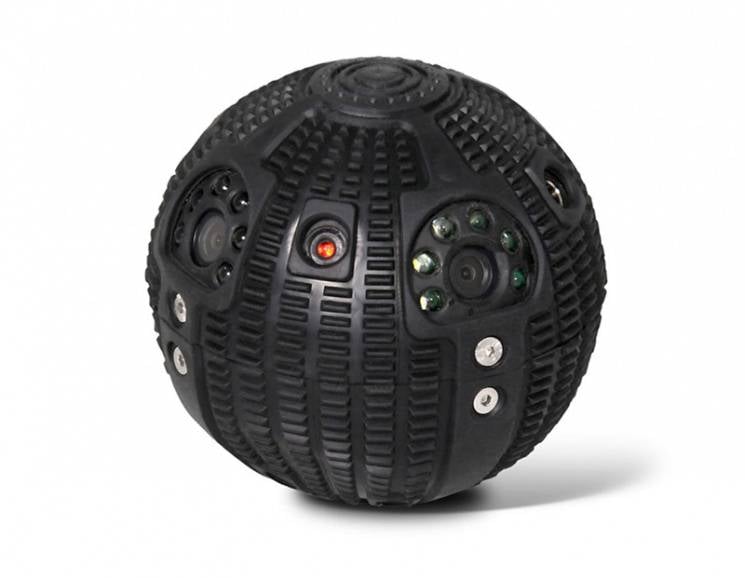 The wireless inspection device “Sphere” is able to conduct a circular review (360 degrees) of the terrain and ensure the transmission of video information online with a fully charged battery of at least 60 minutes without the backlight turned on at a distance of at least 50 meters. Information is transmitted over the air; the power source is a replaceable Li-PO rechargeable battery. In addition, this device maintains its performance after a free fall from a height of at least 3-meters. According to information from the state procurement portal, the Ministry of Internal Affairs of Russia has announced an auction for the supply of one set of devices, which need to be delivered by November 2016 to the central joint storage base of resources of the Ministry of Internal Affairs of Russia, located on the territory of the Moscow Region in Balashikha. The maximum contract price is 1,17 million rubles.

Examination wireless device "Sphere" is designed for the rapid collection of video and audio information in places that may be dangerous or difficult to access. The collected information is transmitted over the air to the remote surveillance and remote control device. The Sphere itself is a small ball equipped with four video cameras with LED backlighting, a microphone and a transmitter of the collected information. This device in the form of a ball is designed to be thrown by employees of special services and police in remote areas to assess the situation. 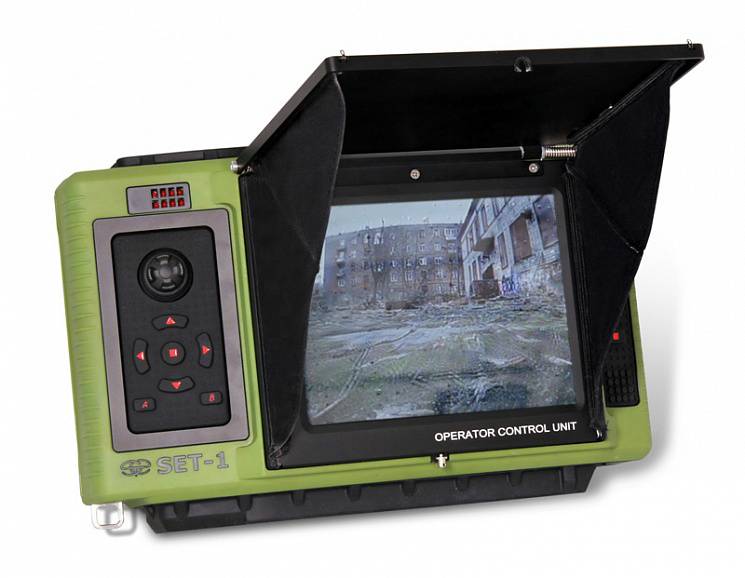 "Sphere" received a positioning system - the device in automatic mode always takes a vertical position. The wireless inspection device has the unique ability to transfer video images from four of its video cameras at once without losing its quality. A monitor, a joystick, as well as equipment control buttons are located on the body of the video surveillance and remote control devices. For transportation and storage of the "Sphere" a special waterproof case is used, which provides protection from water (rain).

The main features of the "Sphere":
- simultaneous transmission of images from all 4-x video cameras without losing its quality;
- providing a review in 360 degrees;
- high mechanical strength of the device, withstands multiple casts and falls from heights 5 meters;
- range of the device - 50 meters;
- the presence of a highly sensitive microphone;
- the presence of high-power LEDs (white) and infrared illumination;
- built-in vertical positioning device;
- replaceable power source.

The observation range with the transmission of video information over the radio channel to remote control bullets and video surveillance is at least 50 meters.
The working frequency range of the radio channel is 1110-1230 MHz.
Video cameras (own development) - 4 pcs., CMOS and b / w.
Lenses - 4 pcs., Bordlens 2,8.
Illumination - 4x6 white LEDs.
Viewing angle - 360 degrees.
The power source is a Li-PO battery (replaceable).
The device operation time (depends on the mode and operating conditions) - at least 60 minutes.
Dimensions - diameter 90 mm.
Weight - 610 grams.
The operating temperature range is from -20 to + 45 degrees Celsius.
Remote monitoring and remote control (common to the "Sphere" and "Scarab"):
The operating frequency of the remote control channel is 917 MHz.
The power source is a Li-PO battery.
Dimensions - 271x163x77 mm.
Weight - 1,8 kg. 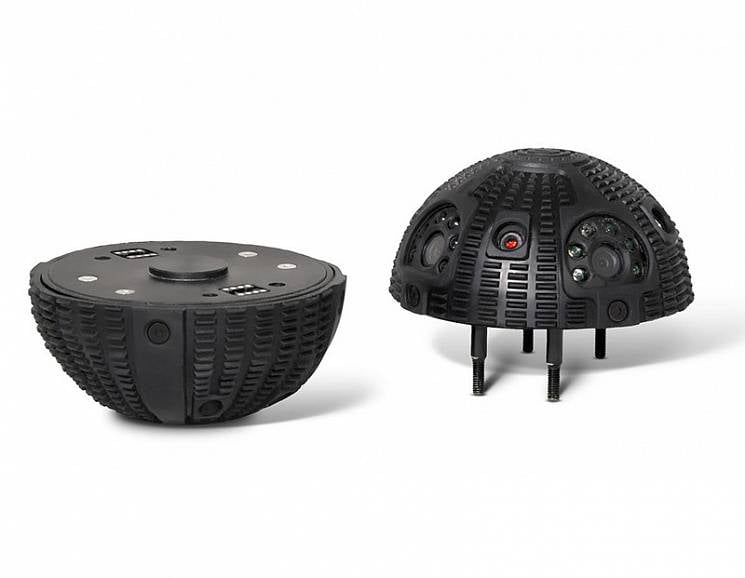 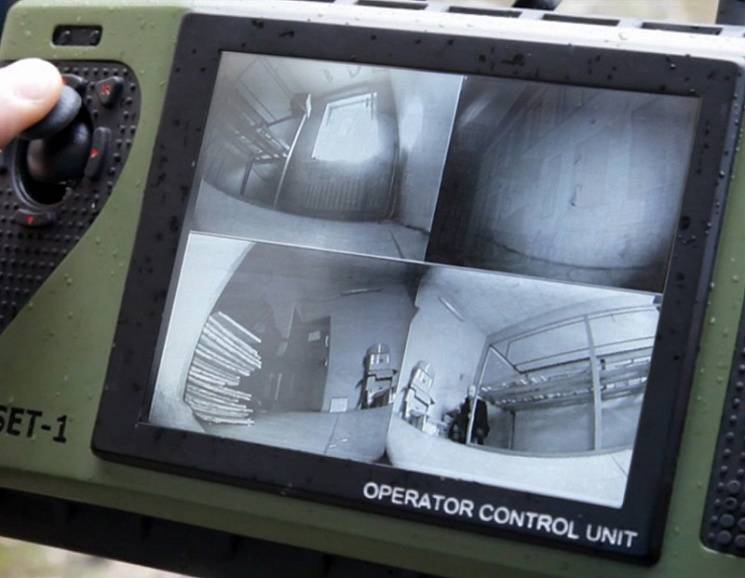 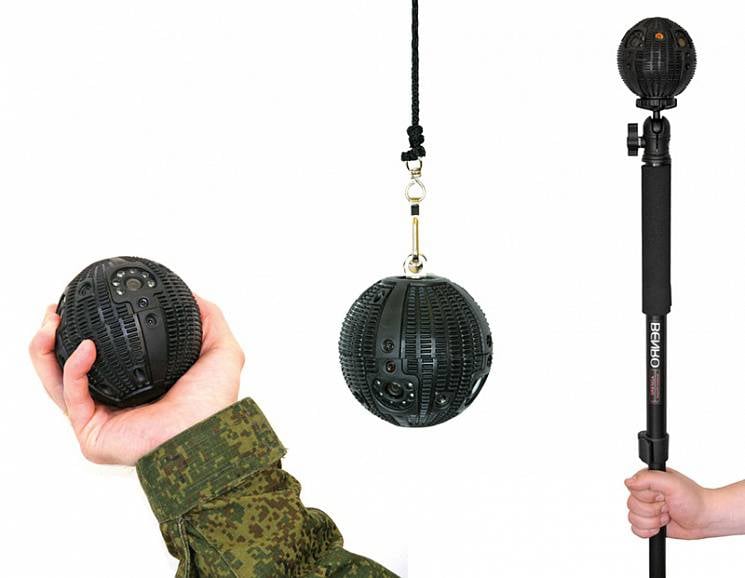 Despite all the advantages that Sphere has, it requires getting close to a dangerous object. This is not possible in all situations and is not always safe. In this case, a robot called the Scarab is ready to come to the aid of the Sphere. This robot is more like a children's radio-controlled toy. Control of its movement is carried out from the console using a proportional two-axis joystick.

The “Scarab” complex is designed for operative collection of audio and video information in areas that are difficult of access and dangerous for humans, and then transmitted via radio to a video surveillance and remote control console. It includes a controlled inspection platform and a remote control with an integrated video surveillance system. Managed inspection platform "Scarab" is a movable wheelbase, which is equipped with high-resolution video cameras, a microphone, a thermal imager and a transmitter of audio-video information over the radio channel. Radio transmission ensures stability and high image quality, even under poor signal propagation conditions. The digital radio channel was made on the basis of receivers and video transmitters of the CORDON series with COFDM modulation, which are produced by “SET-1”. 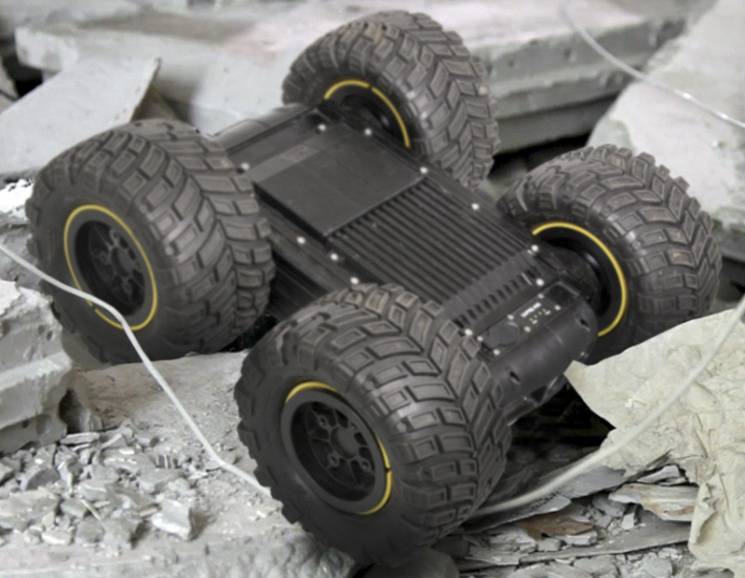 The capabilities of a controlled inspection platform exceed the "Sphere". For example, the distance control and transmission of the image increases to 250 meters, and thanks to the presence of a self-propelled platform, the robot can easily move through the rubble. Work time has also grown, which is already at least 120 minutes. The height of the robot is only 15 centimeters (on wheels), which makes the device almost imperceptible to prying eyes, and the electric motor mounted on it ensures silent operation of the robot.

The observation range with the transmission of video information over the radio channel to the video surveillance and remote control (on the ground) is at least 250 meters.
Operating frequency range:
- video transmission (digital radio channel) - 1300-1400 MHz.
- video transmissions (analogue radio channel) - 1010-1230 MHz.
The power source is a Li-PO battery.
The time of continuous operation of the device from the internal power source is 120 minutes.
Dimensions 355x348x155 mm (on wheels), 330x300 x110 (on tracks).
Weight - no more than 5,5 kg.
The operating temperature range is from -20 to + 40 degrees Celsius.
Permissible humidity (at + 25 degrees) - 98%. 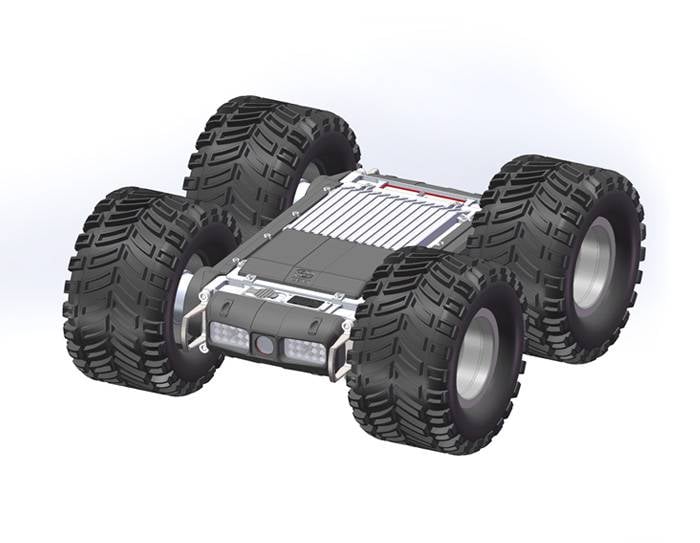 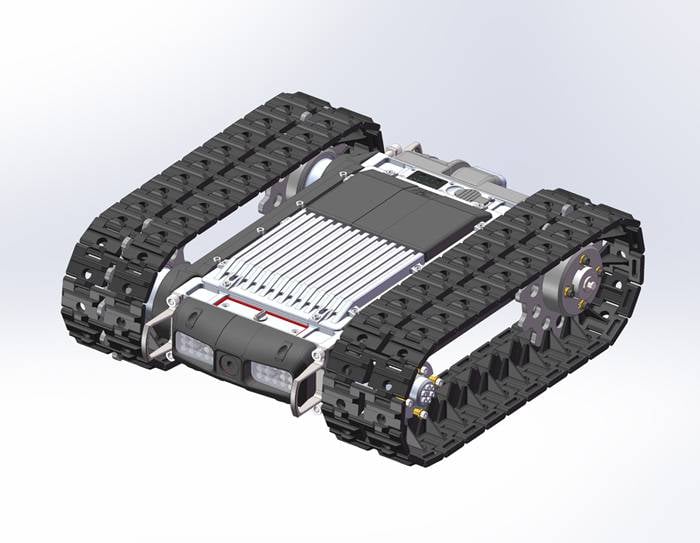 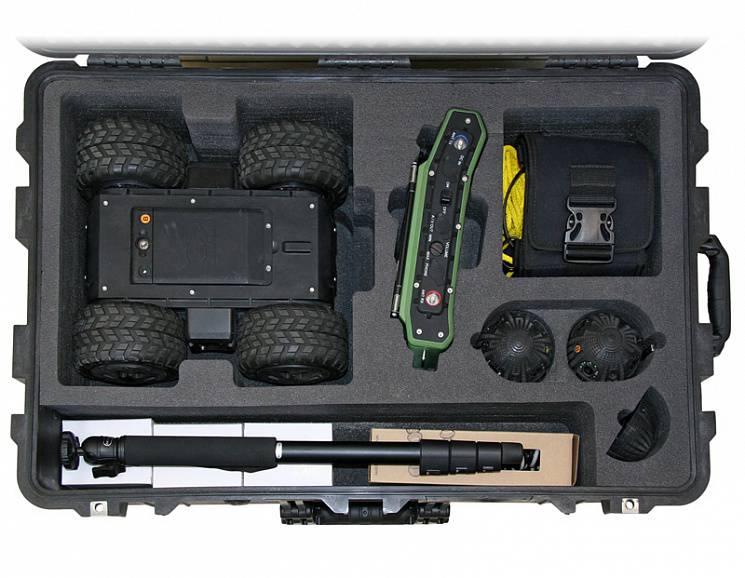