We inform our dear readers that the informational and analytical portal “Military Review” (topwar.ru) is switching to a new design, as well as implementing changes according to a number of operating principles. We consider it necessary to bring to the audience the most significant, from our point of view, changes concerning both the work of the site itself and activities on the site of its users.


Immediately it is worth noting that the site is not going to change its approach to the information component. Our focus remains the same: coverage of events related to the activities of the Armed Forces, the military-industrial sphere, geopolitics, acute issues of the economy, education, which are in no small degree capable of making their contribution to the security system of the state and society. We do not change the patriotic orientation, we will continue to carry out activities taking into account Russian interests. At the same time, while continuing to work on financing solely through the placement of advertising content by advertisers, we once again inform readers who have conspiracy theories that the Military Review is not funded by any public or private structures, including foreign ones.

What exactly will change? 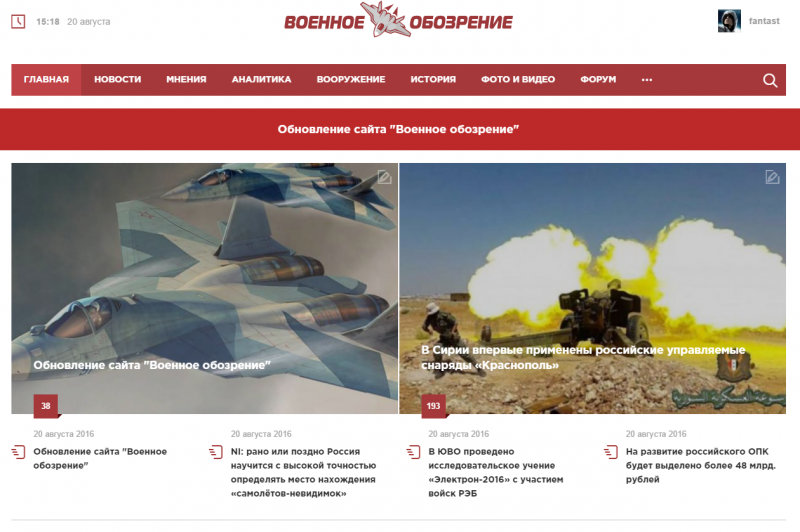 Our regular readers had time to get used to the fact that each article and each published comment can be awarded a rating, both positive and negative. Any reader in the early version of the site could put a plus or a minus, based on his vision of the content of the material (commentary) or even its authorship. Often, the administration and moderators of the site even had to deal with the personal dislike of individual users for each other, which poured into "minusovanie" without any of its arguments except for the argument in style, sorry generously, "he himself was a fool." In the new version of "Military Review" we decided to abandon the system of "minuses".

In particular, we are talking about the fact that if one or another user liked the material (comment), then, as before, he can put a “plus”, or rather use the “Like” button.

If the material is not liked, the user can always express his opinion in the comments, arguing his position. It is by arguing, rather than slapping the silent "minus" on duty, or by confining himself to the above-mentioned commenting technique with a transition to personalities. For those who still do not want to move on to the practice of civilized communication and acquaintance with materials and comments, each user has a “black list” at their disposal. The ban system for violating the rules on the Military Review website, including the outright trolls, will also remain in working condition.

The changes will affect the system of assigning titles to the "IN". Considering the fact that a certain category of users is too serious about accumulating points for assigning “titles” and trying with all their might in just a week, or even less, to “rise” to the rank of marshal, we decided to switch to the practice of having more points for assignment of the next reader "title". Understand us correctly - the marshal's staff, some of whom scored points for comments from the “I Am of the Same Opinion” series, rolls off, and from the running set with big stars dazzles in the eyes ... The ranks of the marshal and the generals on “VO” will thin.

If we touch on changes in the design of the site, then our main page becomes more informative and dynamic. The most significant and popular stories among readers directly on the main page will be sorted into categories, be it Opinion, Armament, news or analytical sections. As a separate segment on the main page will be presented photo and video materials, as well as articles historical directionality. There was also a place for the “Readers' Choice” section, which will include the most actively read and commented on materials.

For any additional details you are interested in, please contact the site administration. To do this, it is possible to write a direct letter from the “Contacts” section, or use the “Report” function.

No re-registration for VO users after innovations in the portal is required.

The website update is designed to increase the level of user convenience for exploring the content, improve the dynamics of the site, increase its visual information content. We hope that you will like all the innovations, our dear readers, and it will not take long for you to get used to the new rules of the Military Review.
Ctrl Enter
Noticed oshЫbku Highlight text and press. Ctrl + Enter
We are
1 379 comments
Information
Dear reader, to leave comments on the publication, you must to register.