August 12 2016
9
The integration of Russian Su-30MKI fighters with BrahMos missiles (Brahmos) by the end of the summer 2016 year will be completed by 99%. It is reported by TASS with reference to the words of Sudhir Kumar Mishra, the head of the Russian-Indian joint venture BrahMos Aerospace. According to him, the decisive tests of the Bramos on Su-30MKI airplanes should be held on August 26-27 at the Indian Chandan test site located in the state of Rajasthan. As part of these tests, the developer will check how the combat missile is separated from the fighter. Successful completion of these tests will actually mean the completion of work on the integration of the Su-30MKI multi-purpose fighter with a new missile.


From 25 June 2016, the Su-30MKI fighters have already conducted 10 test flights, in which they made difficult maneuvers in the air. At the same time, experts note that tests for the separation of the rocket from the aircraft are associated with a significant risk. “This is exactly how dozens of aircraft were lost in the world,” said Sudhir Kumar Mishra. After testing in late August of this year, the missile developer will test the transfer of correction commands from a combat aircraft to a rocket, in order to improve the accuracy weapons and avoid blunders. After that, if everything goes well, Russia and India will jointly conduct two regular launches of Bramos fighters from the fighter at the sea and land targets. These launches will be the final stage of testing and can take place at the end of 2016 - the beginning of 2017.

According to Sudhir Kumar Mishra, most likely in December 2016 the Bramos rocket will be launched at a moving sea target, and at the beginning of 2017 - at a ground target. After that, all the requirements that are imposed on missiles by the Indian Air Force will be fulfilled. By the middle of next year, it is planned to equip with new aviation cruise missiles, at least two Su-30MKI Indian Air Force squadrons - 40 aircraft each.

The successful project of Russia and India to create cruise missiles opens up new horizons for the Indian army. In the near future, the aircraft version of the Bramos rocket will appear on Indian Su-30MKI fighters. According to military experts, such a powerful and sufficiently versatile missile is able to compensate for the growth of the naval forces of neighboring China. Moreover, by 2025, the PRC plans to have fleet already 7 aircraft carriers, taking control of the Southeast region. At the same time, several hundred Indian air force fighters equipped with Bramos cruise missiles will be able to level the superiority of China in Southeast Asia. 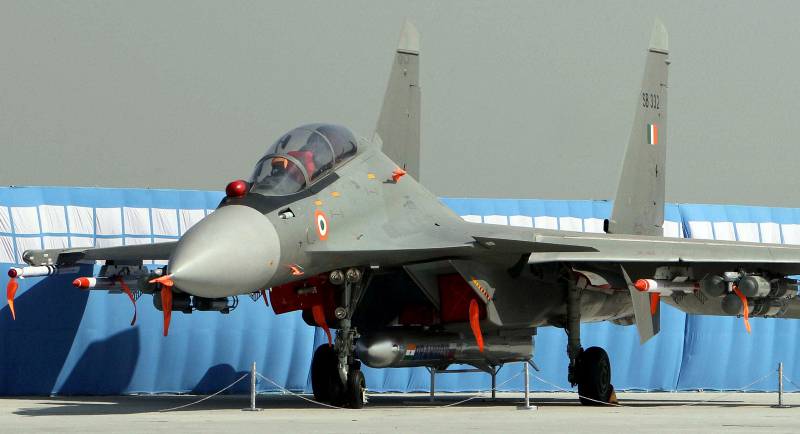 The Soviet Union had previously resorted to such tactics, when the United States sharply increased the number of its aircraft carriers. In response, the USSR Navy formed a powerful group of atomic submarines. The Brahmos project is just able to solve the problem of China's dominance due to the universality of the developed rocket. If the original version of this cruise missile was intended only for launches from ground installations, then from the 2014 of the year in India a Mini-Brahmos rocket is being developed, designed for air and water strikes. So "Brahmos" can become a triad sword and restore the balance of power between countries in the region. A smaller version of the cruise missile will appear not only on Su-30MKI fighter jets, but also on MiG-29K fighters, which form the basis of the wing of the Indian aircraft carrier Vikramaditya (formerly Admiral Gorshkov).

“Despite the fact that India has two main adversaries, Brahmos was created to contain China’s growing fleet and ground forces. - notes military expert Ashok Singh. - The recent decision of the Indian Ministry of Defense to deploy several launchers and up to 100 Brahmos supersonic missiles near the Chinese border confirms this.

Initially, this supersonic rocket was created as anti-ship, it is able to hit targets at a distance of 300 kilometers. The rocket is quite effective and versatile. Its flight speed is several times faster than the speed of sound, and the warhead weighs 300 kg. This is enough to cause serious damage even to such a large surface ship as an aircraft carrier. The name of the rocket is the first letters of two large rivers: the Brahmaputra and Moscow.

The basis of the cruise missile "Brahmos" formed another Soviet anti-ship missile "Yakhont". The joint development was led by the NPO Mashinostroyeniya and DRDO - The organization of defense research and development in India, work began as early as 1998. As is the case with many Indian projects in the military sphere, the development time of the rocket dragged on and the Brahmos rocket developed its development in a new mini-form only in 2014 year. Since this year, the development of missiles for aircraft and underwater firing. In this case, the dimensions of the rocket, it was decided to reduce from 10 to 6 meters, and weight - from 2,5 to 2 tons. After these metamorphoses, the Su-30MKI heavy multipurpose fighter can take on board three such missiles at once, the ship's MiG-29K and the joint Russian-Indian X-Tyne 5 fighter (TG50) (FGFA) are two missiles each. At the next stage, it is also planned to equip the Varshavyanka project diesel submarines, which are already in service with the Indian Navy, with underwater versions of the Bramos missile.

For the first time, the Indian military is planning to purchase XMNUMX Brahmos missiles to equip air units, spending 200 billion dollars from the military budget for these purposes. The amount does not seem critical for India, since the country's military budget is growing every year, including due to savings on the purchase of cheap oil. In addition, this project has a good export potential. No one other than Russia, and now India, does not release supersonic cruise missiles in the world. A new version of the rocket, which can be used both in aviation and in the submarine fleet, opens up additional markets for the Indians. At the same time, in the 1,1 year, Russian designers are planning to transfer the Brahmos missiles to hypersonic flight speed. 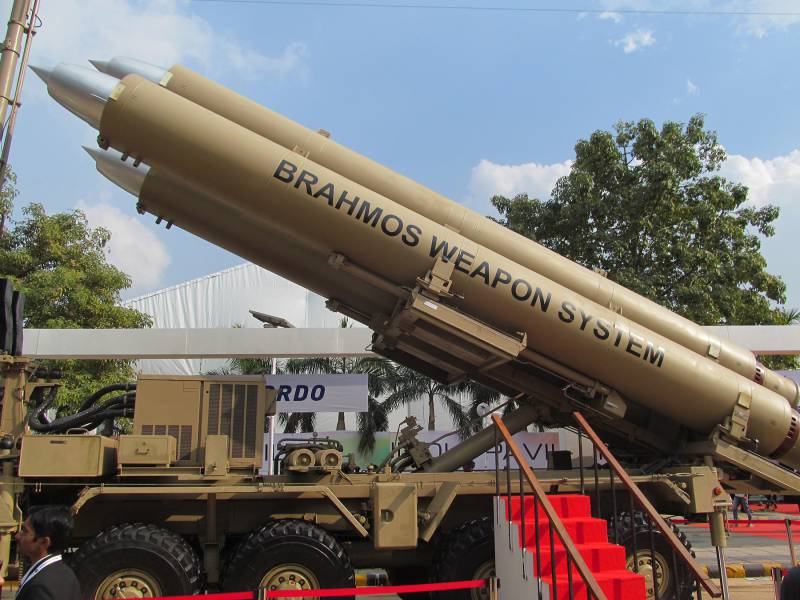 Currently, India is one of the few states with which the Russian Federation has developed reliable and long-term military cooperation, which has continued since the days of the Soviet Union. The Bramos missile is not the first joint project of the two countries. The pioneer in this area was the main battle tank T-72M1 (Ajeya), which was produced in India under license since 1987. In the spring of 2016, negotiations on a licensed assembly began tank T-90 in India. This is not the first year that a BMP-2 designed for the Indian army has been produced according to such a scheme.

The project of the Bramos cruise missile differs from the usual assembly by the presence of joint developments. In this, it is similar to another ambitious aviation project to develop a fifth-generation Russian-Indian fighter based on the T-50 - FGFA. In these two cases, we are talking about creating a product “to the client” - the Russian design idea and scientific base, Indian investments and technical options. This practice saves budgetary funds by attracting customer financing.

India, with the arrival of Prime Minister Narendra Modi, has embarked on attracting business to the local defense industry. Investors were asked to buy 51% of the shares of defense enterprises for the subsequent development of production. In the Russian Federation, on the contrary, state-owned companies acquired packages of large defense enterprises before the fall in oil prices. Currently, the process of attracting investors in Russia repeats the Indian strategy. At the same time, it is necessary to understand that the investor must be a reliable partner. Let not as rich as India, but time-tested. “At present, the combination of Su-30 and BrahMos is already attracting great interest from foreign buyers, we associate with this pair a large number of commercial offers,” said Sudhir Kumar Mishra. Exports of a cruise missile can become a truly profitable business for our countries, while the revenues will be divided according to the shares of the parties in the joint venture - the Indian share is 50,5%, the Russian share is 49,5%.

Su-30KI - (modernized, commercial, Indian; according to NATO codification - Flanker-H) version of the export fighter Su-30MK, created specifically for India. It is a double multipurpose multipurpose heavy fighter of the 4 + generation with an expanded airborne and air-to-surface suspension armament. The Indian Air Force has more than 200 fighters of this type in service. 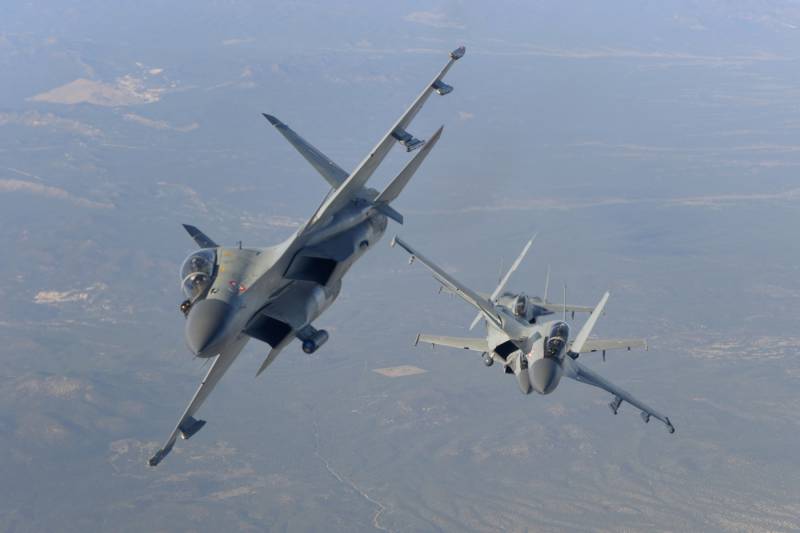 Negotiations on the supply of the first Su-27 fighters have been conducted with India since the 1994 year. The design of the Sukhoi aircraft designed for the Indian Air Force, based on the Su-30, began in the 1995 year. A. F. Barkovsky was appointed chief designer on this topic. November 30 1996 between India and Russia was awarded a contract for the phased development and supply of India 8 two-seat fighter Su-30K, as well as 32 multi-purpose double fighter Su-30MKI. The delivery of combat aircraft was envisaged in several batches, with a consistent increase in the capabilities of their powerplant, avionics and armament complex.

The first experienced Su-30I-1 fighter was being developed on the basis of the Su-30 production aircraft, the construction was completed in the spring of the 1997 year. The first flight on it, test pilot V. Yu. Averyanov made 1 July 1997 of the year. Since July, the 1997 of the year, the Sukhoi Design Bureau has begun the implementation of a program for testing aircraft jointly with GLITS Air Force. Since 2000, mass production of a new multi-purpose fighter has been deployed in Irkutsk. According to data from open sources, the 242 Su-30MKI fighter is currently in the Indian Air Force, supplied from Russia both in finished form and in the form of kits for licensed assembly. Currently, India is the largest operator of Su-30 fighters in the world.

Flight specifications of the Su-30МКИ:

The Bramos-M airborne anti-ship supersonic missile was first presented in New Delhi at the DEFEXPO-2014 exhibition. Then the model of the rocket was demonstrated. First of all, these missiles are designed to arm the aircraft of the Indian Air Force. Su-30MKI fighters of the Indian Air Force can carry such missiles on 3, MiG-29K / KUB - two missiles each. A promising fighter of the fifth generation FGFA, jointly developed by Russia and India, will also be able to take on board two such missiles. 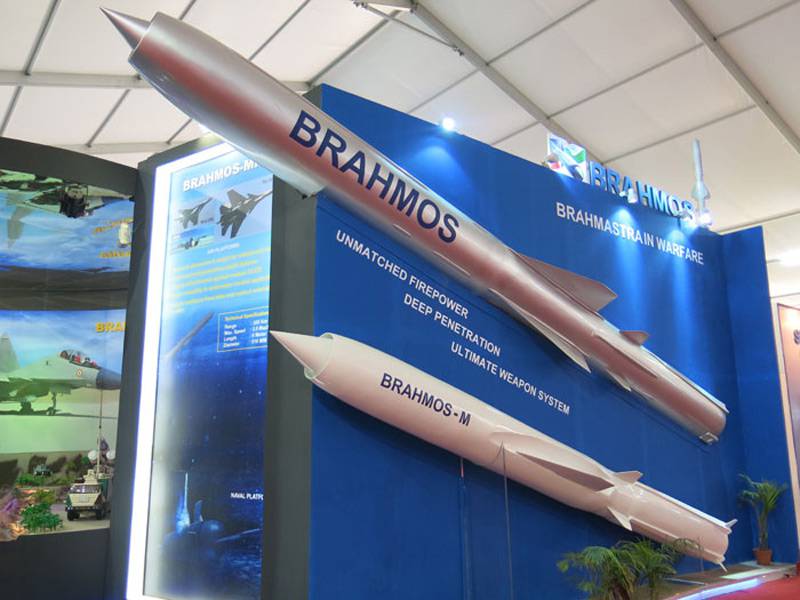 "Bramos-M" should be faster than the basic version of the rocket, developing in flight speed to Mach 3,5 instead of Mach 2,8 in the usual. The rocket length was reduced to 6 meters, and the diameter is 50, see. The weight of the warhead of the Brahmos-M missile does not exceed 300 kg, while the firing range is supposed to be 290 km.