August 11 2016
101
The Israeli Defense Ministry announced information about a promising armored personnel carrier, currently being developed in the interests of the armed forces. Some basic information about the new project has been published, and in addition, photos of the car and a video of its running trials have become public knowledge. Also announced plans for the timing of the deployment of mass production and delivery of equipment to the troops.


Information about the new project of the Eitan armored personnel carrier (“Resistant”) was published by the Israeli Ministry of Defense last Monday, August 1. Along with a press release revealing some of the details of the promising project, several photos of the existing prototype were published, as well as a video recording made during its tests. Published information allows you to make a general impression of the new Israeli armored vehicle, as well as see it on the go, overcoming various test tracks.

The purpose of the project "Eitan" was to create a relatively easy and inexpensive means of transporting personnel and various goods, which could replace the existing equipment. Currently, the Israel Defense Forces is implementing a program to replace obsolete M113 armored personnel carriers with new equipment. BTR with inadequate characteristics are planned to be gradually decommissioned, replacing them with modern equipment that meets existing requirements. As a replacement for the M113, the heavy tracked armored vehicle “Cameron” and the wheeled armored vehicle “Eitan” are currently being considered. 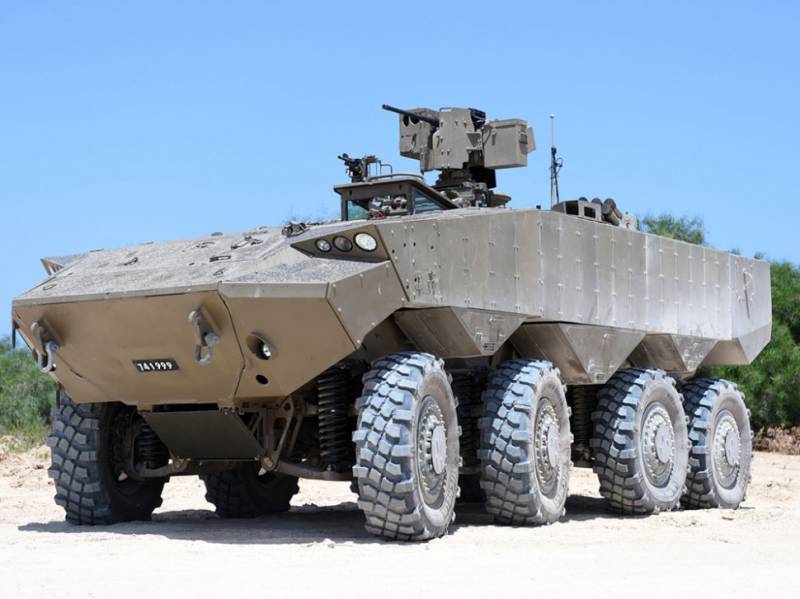 The development of a new project is carried out by specialists of the Office tank industry of the Ministry of Defense of Israel, namely the development department of the Merkava tank. This design office has solid experience in creating modern armored vehicles, which is required to be used in the development of a promising armored personnel carrier. In addition, some other organizations may be involved in the project. For example, developers of combat modules and other equipment, which will be used in the Eitan project in the future, can take part in the work.

Published data clearly indicate that the authors of the “Eitan” project actively used foreign developments in the field of wheeled armored vehicles. The prototype of a promising armored personnel carrier has an appearance that is characteristic of similar machines of recent times, and does not differ from them by some other features. Such features of the project are a logical and reasonable step aimed at improving the basic characteristics of technology. To date, the industry of the leading countries has formed the most successful at the moment appearance of a wheeled armored personnel carrier, which does not require significant changes.

BTR "Eitan" is a heavy class armored personnel carrier with a wheel formula 8х8. The project initially laid modular architecture, with which in the future is proposed to solve various problems. Modularity should be expressed in the possibility of installing various combat modules with different weapons, equipping equipment with other necessary systems, etc. Some plans have already been identified for such an approach to design. Thus, it was determined that the bulk of prospective armored personnel carriers will be armed with combat modules with small-caliber guns. The prototype, in turn, so far carries only a heavy machine gun.

Armored "Eitan" received a standard for modern wheeled armored personnel carrier body with a time-tested layout. A frontal part consisting of several inclined sheets was used, behind which a roof was placed with the central part lifted up and the inclined side sheets. The sides of the body are made in the form of box-shaped units with a beveled front part and additional wedge-shaped boxes between the wheels. The aft of the hull has two developed protrusions, between which is placed the door for the landing of troops.

The layout of the armored vehicle conforms to existing standards. In front of the body are placed the engine and part of the transmission units. Behind the engine compartment, at the left side of the hull, is the control post with the driver's workplace. Behind the driver are the seats of other crew members. To gain access to their seats, the commander and driver must use their own hatches in the roof. The entire central and aft parts of the hull are given under a relatively large troop compartment. In the existing volume managed to place 12 seats for fighters. For their landing and landing in the stern there is a door. 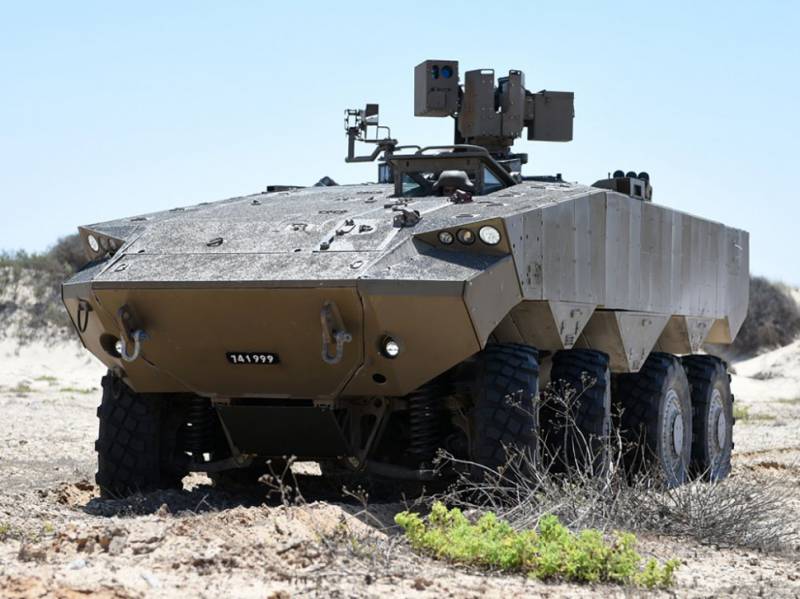 In connection with the specifics of the armed conflicts in which the Israeli army has to take part, the Eitan armored personnel carrier has a fairly powerful booking. Declared the possibility of protection from various ballistic threats and from explosive devices. At the same time, however, the exact protection parameters have not yet been announced. Apparently, protection is provided, at least, against large-caliber small weapons and explosive devices weighing up to several kilograms.

In addition to its own armor promising BTR will be able to use other means of protection. Thus, according to the statements of the Israeli military, in the future a new version of the Trophy active protection complex should be created. This protection system is planned to be installed on new armored vehicles, including on Eitan vehicles. Whether the armored personnel carrier will be able to receive mounted modules for additional reservations is not yet specified.

One of the main requirements for the new design of BTR, apparently, concerned the level of protection, which could be increased due to other characteristics. As a result, the Eitan BTR was quite large and heavy. Thus, the combat weight of the armored vehicle, depending on the modification and configuration, should be in the range from 30 to 35 t. Such parameters impose the corresponding requirements on the characteristics of the power plant and the chassis.

In the front engine compartment of the body of the armored personnel carrier, a diesel engine with an 750 horsepower is installed. The available transmission provides the distribution of engine torque on all wheels of the armored vehicle. The chassis of the promising BTR is based on an independent suspension with elastic elements in the form of vertical springs, working in compression. As in the case of some other projects of Israeli armored vehicles, the springs are located outside the body and have no protection. A relatively powerful engine should provide a specific power of at least 21-22 HP. per ton, thanks to which the maximum speed of the armored personnel carrier must reach 90 km / h.

The project "Eitan" provides for the use of combat modules of various types. Depending on the wishes of the customer, serial armored personnel carriers can be equipped with different types of systems with different weapons. To date, in practice confirmed the possibility of using modules with large-caliber machine guns. In the future, it is planned to equip the BTR with more powerful weapons in the form of an automatic cannon. 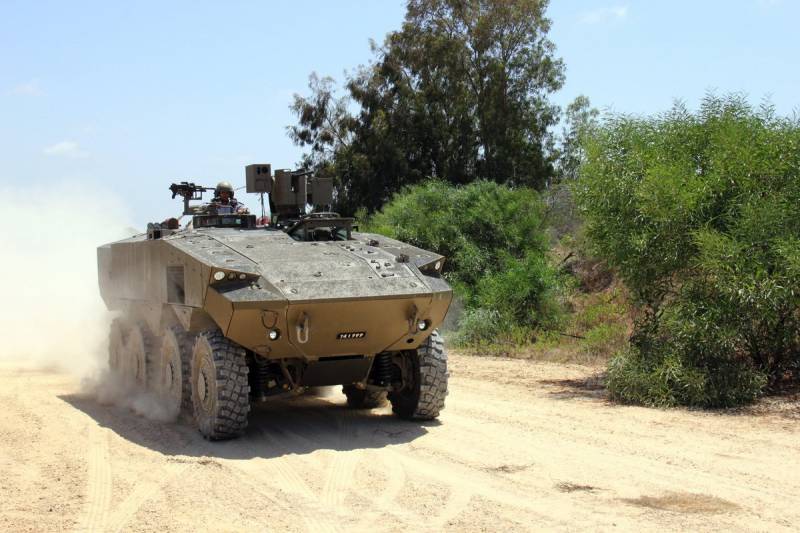 The prototype armored personnel carrier shown is equipped with a combat module of one of the existing types. On a small platform installed behind the driver's hatch, mounted a combat module with a large-caliber machine gun M2HB. On the rotary platform of the module there are also optical-electronic systems necessary for searching for targets, a box for ammunition kit and automated guidance systems. All units of the combat module are located outside the vehicle’s armored hull. The control is carried out using a remote control installed in a protected volume. All major operations during the use of weapons carried out by the crew without going beyond the armor. Also, an experienced armored personnel carrier carries several smoke grenade launchers placed on the roof, and one of the upper hatches is equipped with a turret machine-gun installation.

In the future, it is planned to equip the "Eitan" with more powerful weapons. As part of the prospective BTR project, the subcontractor represented by Rafael received an order to develop a prospective combat module with artillery weapons. It is assumed that the result of this project will be the appearance of a remote-controlled turret with an automatic gun caliber 30 or 40 mm. The combat module will be fully placed outside the Eitan armored corps, and will be managed using a special wired communication console.

The main part of the design work on the topic "Eitan" ended last year. A prototype of a promising armored vehicle was built in the fall. After that, the car came to the test, the purpose of which was to check its characteristics when driving on different routes, including cross-country with different types of landscape. To date, after performing some tests, the Israeli Ministry of Defense considered it necessary to publish some data about the new project.

According to existing plans, over the next few years, project developers will continue to test prototypes, and possibly several new prototypes. Checks and fine-tuning of technology will continue until the end of this decade. The Eitan armored personnel carrier will have to enter service with the Israeli army no earlier than 2020. In the same period, it is planned to launch mass production of new equipment. 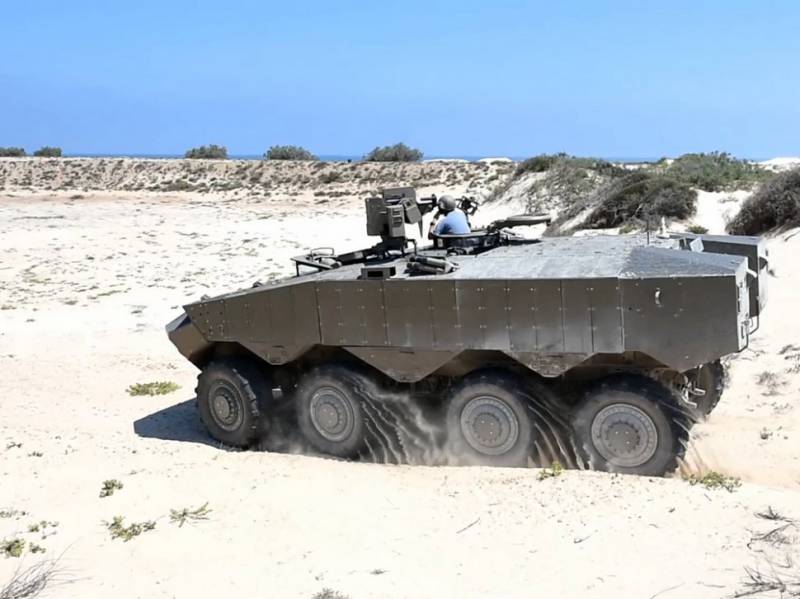 Wheeled armored personnel carriers are supposed to be used in the current program of rearmament of the army, implying the abandonment of obsolete vehicles. BAT "Eitan" will be built and operated in parallel with heavy tracked vehicles "Timer". According to some reports, wheeled armored personnel carriers may be of greater interest to the army in comparison with the existing vehicle on tracked chassis. Thus, the cost of the serial "Eitan" will be about half as much as in the case of "Namer". However, the planned spending on such equipment has not yet been announced. Also, the volumes of future purchases and the share of equipment in deliveries are not specified.

The project of the heavy wheeled armored personnel carrier “Eitan”, developed by Israeli specialists, is of great interest both to specialists and to the general public. First of all, it is interesting as a regular development of its class. The Israeli project is based on some ideas that have been tested and tested during the development and operation of foreign technology. Thus, the success of Israeli designers in adapting existing ideas to the requirements of the army is causing some curiosity.

The second reason for interest is that the Eitan armored personnel carrier is not completely characteristic of the Israeli army. The main types of military equipment of the Israel Defense Forces have a tracked chassis, which is directly related to the main features of the main theaters of military operations in which they are operated. In this case, the “Eitan” project turns out to be Israel’s first attempt to create a wheeled armored vehicle designed for combat work on the front line and having a technical appearance appropriate to that purpose.

To date, the first Israeli project of a wheeled armored personnel carrier has reached the stage of testing a prototype. Based on the results of the inspections, the Israeli Ministry of Defense will have to draw the necessary conclusions and make a decision on whether the equipment will be put into service or sending the draft for revision. In case of successful completion of all the work, according to current plans, the first serial Eitan cars will have to go to the army after the 2020 year. The emergence of such equipment can positively affect the potential of the infantry, but it is still far from serial supply. Over the next few years, the main task of the developers of the new project will be to bring the promising BTR into full compliance with the requirements of the customer.