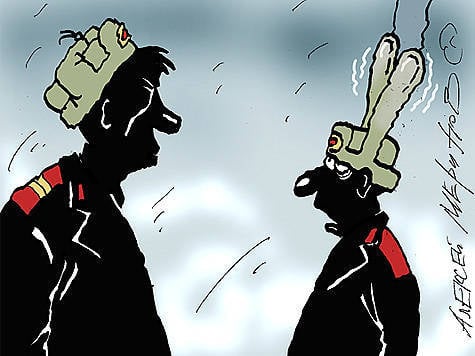 A soldier who suffered from hazing should not violate the law, show courage, hide in the territory of a military unit, but in no case should settle accounts with life. These tips are contained in memos issued to recruits in different parts of the country.

Three such documents are available: from the Moscow Military Institute of Radio Electronics of the Space Forces (Kubinka), from the 200-th separate motorized rifle brigade (Pechenga) and from the military unit 15689 - this is the mission control center for military satellites in Krasnoznamensk. Despite this fairly wide geography, the tips and their literal wording are almost the same, which suggests that recruits throughout the country receive similar instructions.

The essence of parting words is mainly in the presentation of common truths. First of all, educators remind soldiers that “under no circumstances should the law be broken”. It is also recommended “not to give a reason to humiliate or blackmail yourself” and “not to do anything that will be embarrassing for you later”.


In the event that in the first year the senior servicemen are threatened with physical violence, a reminder paternally instructs him: “Do not tell me that you are afraid, show courage. In this way, you will win a psychological and moral victory. ” By the neck, of course, you will get, but you will win a moral victory.


In the case when “offenders are ready to pounce on you with their fists,” the guideline recommends calming yourself with a mantra: “The law is on my side. Justice will prevail". To repulse the attackers should be heroic, but carefully: “... be a man to the end. But do not exceed the necessary self-defense measures. ”


It’s so easy for offenders to get away with anything: “Let them understand that you will be forced to report the incident to the commander”. There’s nothing wrong with that: “Turning to a sergeant, an officer, remember, this is not a sign of weakness, but a sign of strength. Thus, you say: “I can cope with the offender myself, but I do not want to repair mob”.


Probably, the army educators are clearly aware of how a soldier can mend self-prosecution of offenders, so they implore him: “Eliminate even the thought of using weapons”, And at the same time“ about leaving the part, not to mention suicide in protest ”.


An alternative to AWOL brochure suggests the following sequence of actions: “At the very least, hide on the territory of the military unit and stay there until representatives of the High Command arrive to the unit to hear about your absence.” How long it will take to be buried in a barn, and what to eat at the same time - the memo is not specified.


In the end, it is recommended not to be like offenders and to “re-experience your pain and resentment if you suddenly see that your colleagues hurt others.”


In the information part of the memo, after the article of the Criminal Code on violation of statutory relations, there are three more articles on drugs: manufacturing and trafficking, embezzlement and extortion, inducement to use. This topic is obviously a burning one, one of the brochures calls out: “Protect yourself, your friends and loved ones from narcotic poison, call”, then the number of the mobile one of the Federal Drug Control Service staff is given.
In addition to it, five or six telephone hotlines are indicated, sometimes even the telephone numbers of the father and mother of the recruit. The last is the phone of the special unit and after it the final appeal: “Warrior, know! There are no hopeless situations! ”


Despite the seeming absurdity of this document, he clearly demonstrates the main ulcers that hit the modern conscription army - the full legal ignorance of the soldiers, their infantilism, inclination to violence, drug addiction and, of course, the complete inability of the officers to cope with these misfortunes. 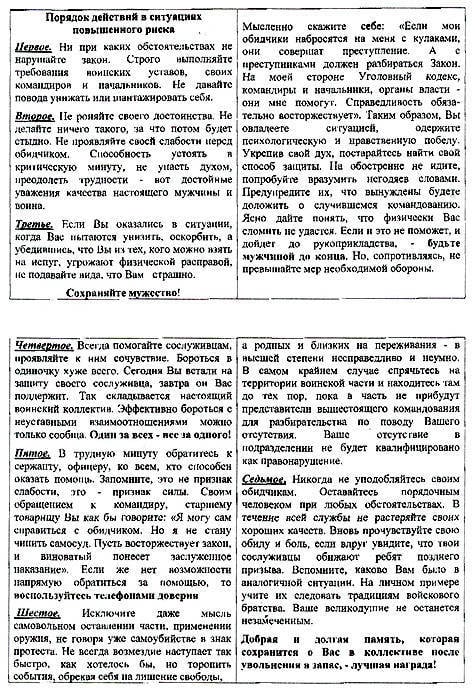 A fragment of the memo.