August 1 2016
336
On the basis of the Federal Law of the Russian Federation on 30 December 2012 of the Year "On Amendments to the Article 1.1 of the Federal Law" On Days of Military Glory and Memorable Dates of Russia ", August 1 is annually celebrated in our country as the Day of Commemoration of Russian soldiers killed in World War I. 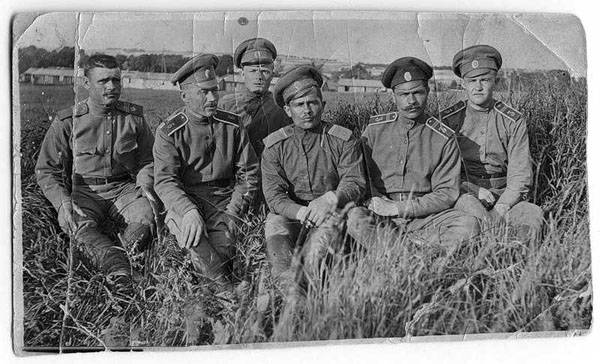 For well-known reasons, very little attention was paid to the First World War in our country, and its heroes were, if not forgotten, then distant in historiography to the third plan. That big war was considered only in the context of the forerunner of two Russian revolutions, their peculiar catalyst. The very name of the war "imperialistic" as it were supposed to say that no feat of the Russian soldier in the battles of the beginning of the century could be by definition.

This approach to lighting stories The PMA today looks insignificant, since it is history that teaches us not to repeat fatal mistakes, honor the memory of our ancestors, the heroic deeds of the heroes, become equal to them and consolidate for the effective development of the country.
Until now, historians argue about what losses our army suffered in that war, which was first called the world war. If we “average” the data that is most often published in historiographic publications, then we can conclude that the number of dead soldiers of the army of the Russian Empire in the PRC was less than 1,6 million people, injured - up to 3,8 million. More than 2's more than million soldiers and officers were captured by the enemy. The loss figures are colossal. It turns out that only every second mobilized has returned home alive and unharmed, and having avoided German (Austro-Hungarian, etc.) captivity.

This is a huge price that Russia had to pay for the war, the feasibility of directly joining the empire of Nicholas II is still the subject of heated discussions by historians and, let's say, fans to speculate on historical topics. Without mentioning how they used to say in certain years in certain circles, the daunting question of the expediency of Russian participation in a war, we can definitely say that we can never forget about this war. If only because it is an event that teaches a clear lesson on how to lose a great country without any unequivocal prerequisites. It is gratifying that at the lessons of history in modern school attention to the First World War is paid, however, based on the scale of the historical event, its prerequisites and its consequences, such attention should definitely be more focused. This is about the question of how today's Russia is trying to be dragged into direct armed conflict with all its forces — the partners have a hand full of such a weakening of the country, and it would be strange to deny it.

Today, memorable events are held in different parts of the country. Thus, in Moscow, Novopeschanaya Street, a ceremony of laying wreaths and flowers to the obelisk "Fallen in the World War 1914-1918 years" is held, as well as to the tomb of Grand Duke Nikolai Nikolaevich in the chapel of the Transfiguration of the Savior. Earlier on the site of the memorial complex was the Moscow city fraternal cemetery, where soldiers who fell during the WWI years were buried (the opening year is 1915). The initiative to create a brotherly burial belongs to Grand Duchess Elizabeth Feodorovna, wife of Grand Duke Sergei Alexandrovich (brother of Emperor Alexander III), the founder of the Marfo-Mariinsky Convent. 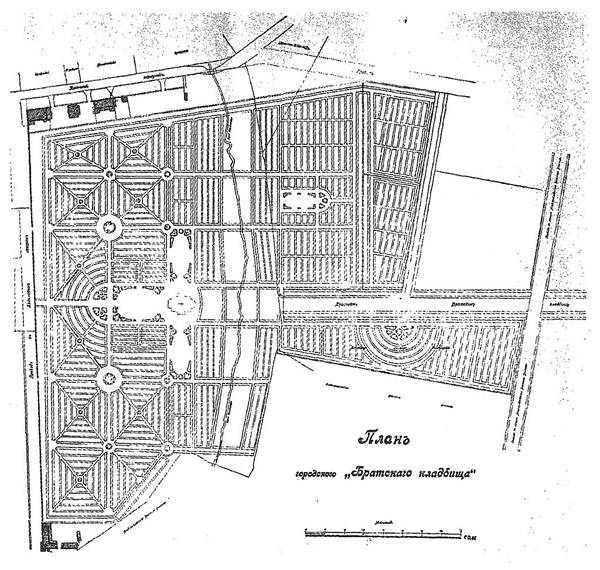 After about 17 years after the opening of the cemetery, it was eliminated. In 1998, the chapel of the Transfiguration of the Savior was built on this site, and in 2004, the memorial complex itself was opened. 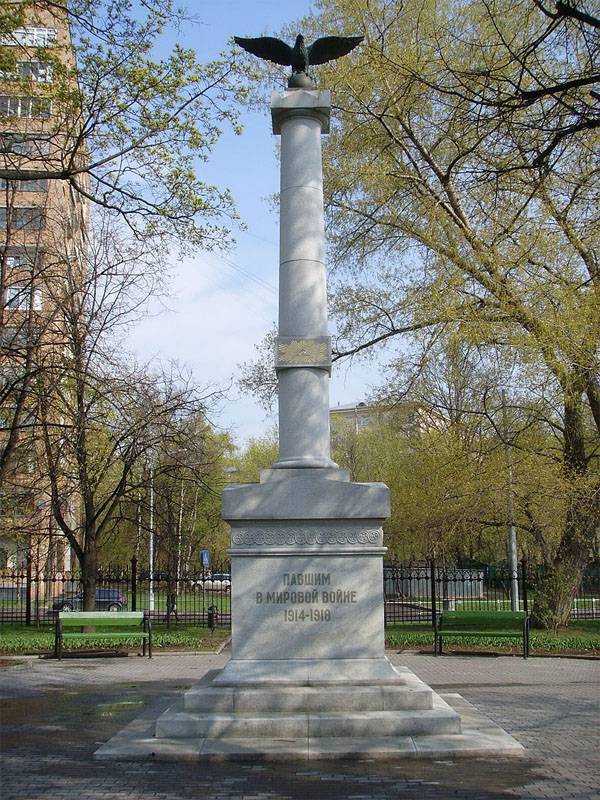 Today it is a place of commemorative events. 1 August 2016 The members of the Russian Historical Society, servicemen of the guard of honor of the Moscow commandant's office, as well as government officials, including some State Duma deputies, take part in them.

Memorable events in honor of the soldiers who fell during the First World War were also held with the participation of Russian President Vladimir Putin, who visited Slovenia. The President of Russia visited the Vršič Pass, located near the town of Kranjska Gora. This place is known for the fact that in 1916, one of the groups of Russian prisoners of war, used by the Austrians for construction work, was covered by an avalanche, burying at least three hundred people alive. Other Russian soldiers erected a chapel in memory of the tragedy, which this year marked exactly 100 years, as well as the tragedy itself on the pass Vršić. 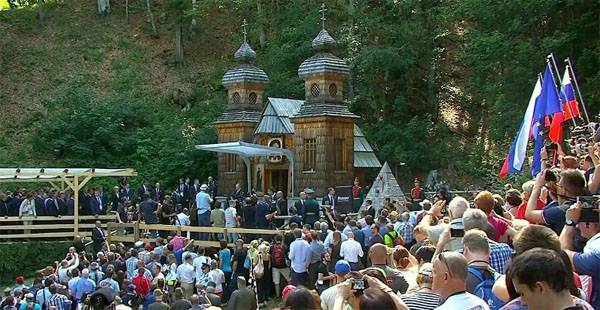 In total, around 10 of thousands of Russian prisoners of war were killed in these places, who were kept in unbearable conditions. Photo about the content of captured Russian soldiers: 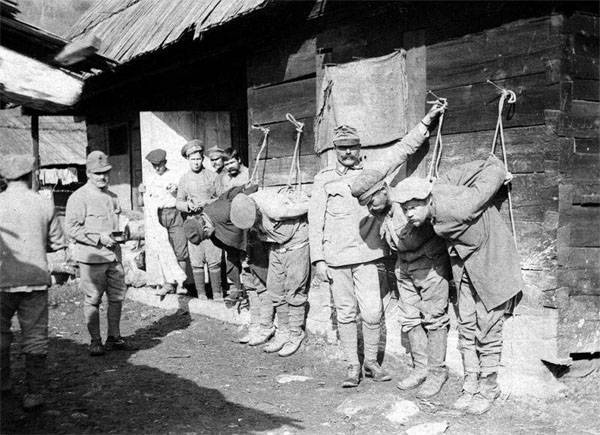 Press office Kremlin:
During the memorial ceremony, Vladimir Putin and Borut Pahor (President of Slovenia), as well as the chairman of the Russia-Slovenia Friendship Society, Sasha Ivan Gerzhina, laid wreaths to the obelisk.

After that, Vladimir Putin and Borut Pahor unveiled a monument to the dead Russian and Soviet soldiers during the First and Second World Wars. The authors of the monument are Russian artists and sculptors Maria Tatevyan, Yana Bragovskaya, Stanislav Smolyaninova, Oleg Kalinin. 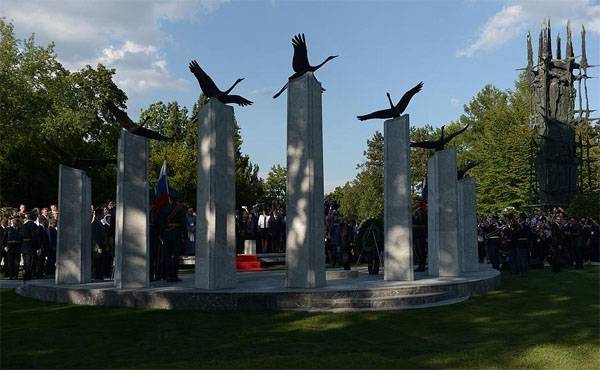 From the speech of the President of the Russian Federation:
I am very glad to be back in friendly Slovenia, where we always welcome guests from Russia with sincere cordiality. I and all my compatriots are especially worried when they visit this place - the Russian St. Vladimir's Chapel. Only in one camp of prisoners of war at this pass from overwork, hunger, deprivations killed about 10 thousands of Russian soldiers. When I got up here and saw this modest chapel, I thought: who among those who built it would have thought that a hundred years after that we would gather here and remember the victims of the First World War. But this is due to representatives of various faiths, thanks to many generations of Slovenes. Thank you for preserving the memory of the victims that were brought to the altar not only of the First, but also of the Second World Wars. Thank you, Slovenia!

World War I left an indelible mark on our history. And today, the memory of her, the memory of fallen on the battlefields and Russian soldiers tortured in enemy dungeons should allow us all to comprehend both Russia's place in the world historical process and the principles of protecting our country's interests in the international arena. Comprehend and remember to draw the right conclusions.

Ctrl Enter
Noticed oshЫbku Highlight text and press. Ctrl + Enter
We are
Day of Military Glory of Russia - the day the counter offensive began in the Battle of Moscow
Military Reviewin Yandex News
Military Reviewin Google News
336 comments
Information
Dear reader, to leave comments on the publication, you must sign in.