And if the US president becomes an American?

August 1 2016
66
The topic of the American election is not particularly interesting for Russians. Why should we bother with the problems of another state? Let even such a monster as the States? We will proceed from the fact that it will still be necessary to live with any president. And in vain ...


No, we will live, of course. And we will endure the president of America, no matter who they become. Even we will meet as a dear guest. Politics ... A neighbor or a partner is there, he just is, and this is a given. Even if we don’t like a neighbor, it’s impossible to pick up your house and move it to another place. Our village is small. In a sense, Earth. And the question of who should endure the house is very controversial.

So, Trump begins to push Clinton hard on all fronts. Understanding the interest of Americans to experiment in domestic politics, Trump suggests once again to review the results of the previous work. What the black prize laureate of the Peace Prize brought to this world, and how productive and useful it was.

Americans in essence are people who are not particularly interested in world politics. Why do we need world politics if we are the center of the world? And we define this policy ourselves! This is the most common opinion among Americans. The USA is the navel of the Earth, and that’s it. Well, they have been taught this way since childhood. The films show the greatness of American science, sport, and the army. And, having looked around, Americans see the whole world in neighboring stores, clinics, universities. The whole world, that is, those who could, by virtue of knowledge, intelligence, grasp, escape from the wilds of poverty and the backwardness of their countries to their country of great opportunities.

Let me remind you who Donald John Trump is. In fact, Trump is the embodiment of the "American dream" in nature. Once, in the distant 1885 year, his grandfather and grandmother stepped on the blessed land of America. Emigrated from Germany. Hence the German surname with a purely American name. An emigrant mother from Scotland. However, it cannot boast of a long American pedigree. Arrived in the US in 1930 year.

And here is a simple guy from the later immigrants could achieve everything. He was able to become one of the richest people in America. Could be everything. At the same time, as befits a "American hero," he was famous not only for his freedom in his statements, but also for his rather extravagant behavior.

When Donald Trump announced his desire to become the president of the United States, the majority perceived it as another billionaire whim. Why does he need it? "Cheese in butter" envies his life. So no one took Trump seriously. Play out and go "make money".

But in the end, having scattered 16 rivals in the corners of the political ring, Trump became a US presidential candidate. In Cleveland, the convention of the US Republican Party called this name. It was there that we saw that Trump, who “knows how to make money,” and at the same time remains a favorite of Americans. Trump's speech at the convention is worth reading. As they would say "pique vests" from a famous work, Trump is the head ...

And there is some confidence in the victory of this guy in the elections. Confidence that in January he will move to the White House. It is clear that to provide all possible obstacles for this is impossible. But with a fair fight, there are no other options. You say: where is honesty, and where is America ... Well, yes, but you understand that just the billions of Trump may well buy this very honesty. Albeit in the supermarket is not for everyone, but they can.

The whole point is who Clintonicha continues to sing the song that the Americans listened to when she was blessed. Yes, with variations, but the essence is the same. And the average man in the United States is not that “our hearts demand change,” rather, hearts demand that if today lives well, then it should be at least as good.

And in this regard, the Clinton clan is not so much like a curse that hangs like over the Bush, but there is nothing much to boast about.

And here, Trump, who is not politically dirty, is still that rival.

Let's try to imagine what will happen if he wins. And not hypothetical, but quite probable.

I think "business shark" will pursue a policy in the same vein as in its firms. Everything for the prosperity of the company. Only the "firm" will be the United States.

We have already said that the States are still quiet, but they are changing the vector of their foreign policy. It felt the Europeans themselves. The Turks felt it themselves, it feels Ukraine, the Baltic States. Even those who have lost their countries thanks to the “peacemaker” Obama also feel this.

Nothing personal. Just business. Why should Americans help losers? How much money is given to the Balts? How much is Ukraine? How much money did military operations take in Asia and Africa? And in the end? As a result, a layer of experts on “stealing” of help and transfer of funds to their own accounts appeared.

No, the United States, of course, will help. Same. But only so that they have the opportunity to repay debts ... the United States. Your debts Again, nothing personal. In business, money is not scattered. Money, on the contrary, earn.

Trump can win the elections in November also because the most important thing for most Americans is their own safety. So, it is precisely the proposals of Trump, and not Clinton, that will be accepted by society. The United States is tired of the constant tragedies in their cities. Tired of corpses. American, by the way, corpses. And only Trump speaks openly about strengthening the fight against crime, about fighting terrorism inside the country, about radical measures against Islamic extremists.

Such a position allows him to earn political points bags.

And now by region. First of all, Europe. The United States under Trump will continue the policy of "full security support" for Europeans. Only now Europeans will now pay for this security themselves. The habit of saving on our own armies and defenses will go into oblivion.

Naturally, the question of NATO arises. The block is strong enough. Do you agree? But on whose money? Business ... Dear Europeans, you want help in the fight against terrorism - shell out. Or fight on your own. And NATO has repeatedly shown its weakness without the American leading and nursing hands. Toy armies of most block members are needed only for extras. These are the same flies that sit on the ox's back and shout: "We plowed!"

It turns out that the Germans, the French and the British can live more or less quietly. The backbone of American domination in Europe, Trump will not touch. Yes, and the economies of these countries are not particularly affected by some increase in military spending. And maybe win.

Although the "quiet being" of Germany in this interpretation sounds somewhat mockingly.

Russia. The game in a rogue country is fed up with everything. Especially since this game brings completely opposite "prizes". Much has been written about Russia’s economy and political influence. Therefore, it is a shameful time for readers to take up the next calculations in this question.

But it is worth talking about the fact that the West, which means the United States, by its actions, is increasingly losing influence in Russia. The rupture of economic ties is killing the influence of transnational monopolies on the Russian economy. Banking sanctions and "scandals" frightened Russian investors. The rupture of military-political ties led to the creation of many controversial situations. And again, to the strengthening of Russia's influence in the world.

So, Trump-businessman will force Trump-President to start the game back. Sanctions will be "eroded." Amendments and other measures will be taken to "save face", but in essence, the Americans need to return relations with Russia to the previous level. Of course, Putin is not a politician who can be intimidated or forced. But there is hope that he will not participate in the next election.

Simply put, Trump is quite an adequate and pragmatic politician for us. And negotiate with him is quite possible. Again the classic is just business.

And what about Ukraine? And here comes the "time to scatter stones." Ukraine has become uninteresting for the United States. With the rupture of economic ties with Russia, the majority of Ukrainian industries have become unprofitable. And as a matter of fact, not necessary for Western businessmen. With the loss of the Crimea, even as the location of the NATO units is not interesting. Not worth it, in monetary terms, such a territory of such costs. There are Romania, Bulgaria, Poland, the Baltic States. Where within each country, unlike in Ukraine, everything is relatively calm. And in direct comparison - quiet and grace. 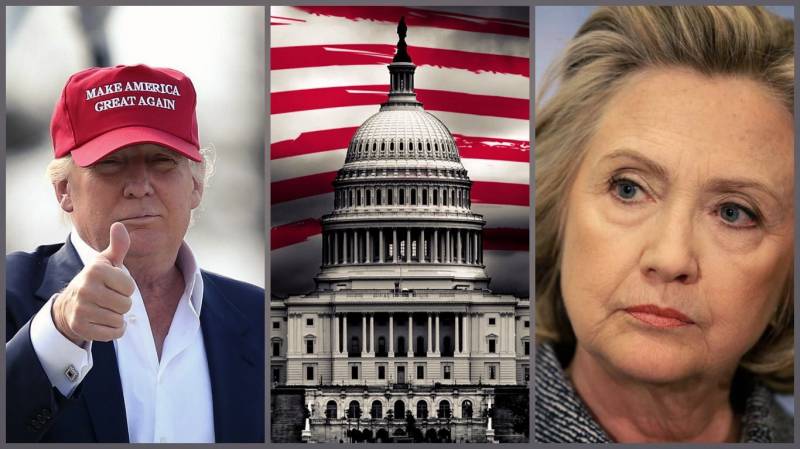 Feed the country, which for a quarter of a century only did, that was eating the inheritance received from the ancestor, Trump will not.

Many still do not understand the reason for the constant “delaying” of the next IMF tranche for Ukraine. Why they used to give, closing their eyes to everything, and today they are looking for reasons to "postpone the decision of the issue." And the reason is in Trump! More precisely, in the one who will "live in the White House" after Obama.

European analysts no less than we understand what will happen. And they understand that the arrival of a cold businessman with an iron grip on politics will make things worse. And the money that is meant for Ukraine may very well be needed by Europe itself. The fragile world of Europe is under constant attack by migrants. Security is expensive.

So, for Ukraine in the near future the main thing is to catch up with Mongolia in terms of GDP per capita. Just something to raise it twice.

What is described in this article, in many ways already voiced by politicians from different countries. Largely voiced in America itself. Changes are coming. And these changes will be quite serious.