Day of the Navy of Russia

July 31 2016
141
Russia has only two allies - the army and the navy! The newest история shows that this expression of Emperor Alexander III to this day does not lose its relevance. 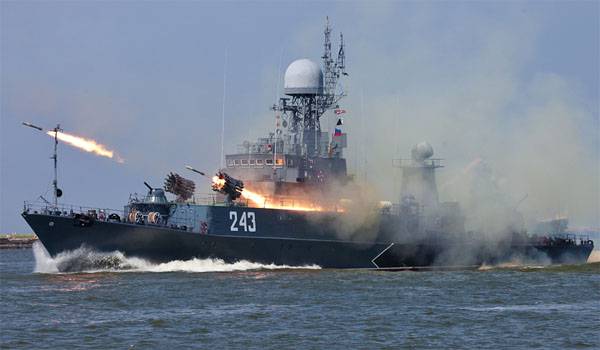 And today (the last Sunday of July) in our country is celebrated the holiday of one of the main allies of Russia - the Naval fleet. Gala events and maritime parades on the occasion of the holiday are held on all fleets of the Russian Navy: the Baltic, Northern, Pacific, Black Sea and Caspian flotillas.

In particular, in Astrakhan, where the ships and boats of the Caspian flotilla are based, the parade on the Volga begins at 10: 00 local time, for which residents and guests of the city can watch from the embankment. During the parade, the ships will play several combat-training episodes, usually attracting the most attention. The exhibition of weapons and military equipment on the Day of the Navy in the city will begin with 12: 00.

On the basis of the Baltic Fleet of the Russian Federation in Baltiysk, in addition to the naval parade, on the day of the Navy, the opening ceremony of the international competition for the Marine Corps will be held. This competition is held as part of the International Army Games-2016 of the Year at the Khmelevka training ground. The press service of the Ministry of Defense of the Russian Federation has published information that teams from 7 countries (Russia, Kazakhstan, China, Angola, Venezuela and Iran) will take part in the competition. The competition will consist of three stages, during which the competing teams will have to overcome specially prepared obstacle courses with the simultaneous implementation of a number of combat training tasks. This is the scheme of the obstacle course of the first stage of the “Marine landing” competition. 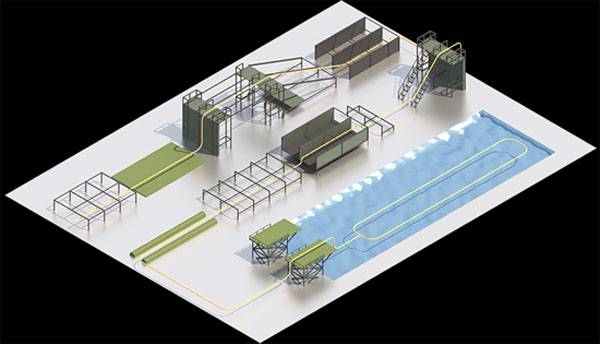 The Day of the Navy of the Russian Federation is celebrated on the basis of the decree of the President of the country from 31 May 2006 - Decree No. 549 “On the establishment of professional holidays and memorable days in the Armed Forces of the Russian Federation”. From 1939 to 1980, the holiday had a “fixed” date in the calendar and was celebrated annually on July 24. Since 1981goda, the date corresponding to the Day of the Navy - the last Sunday of July. The same approach to determining the holiday date for all sailors was also defined in the aforementioned presidential decree of the year 2006.

It is believed that the Eagle ship, built in 1669 year (during the reign of Tsar Alexei Mikhailovich), designed by the Dutch shipbuilder Cornelius Vanbukoven, became the first warship in Russia. However, the domestic navy received its full development during the reign of Peter I, when a whole campaign was launched to create ships to protect the state’s maritime borders.

At the ship-museum “Goto Predestination” opened in 2014 for visitors in Voronezh, there is an exposition with a small panorama of the masters of the XVII-XVIII centuries. on the construction of ships for the Russian fleet. 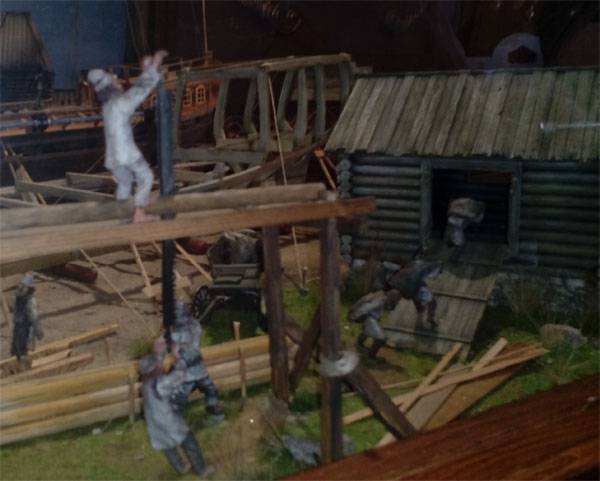 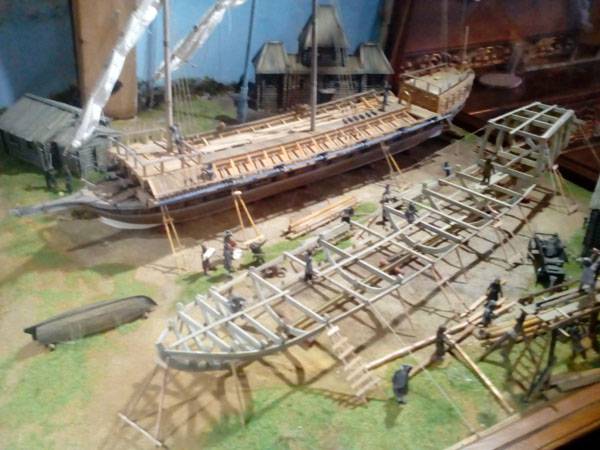 By the way, about the ship "Goto Predestination". This is the first battleship of the Russian Navy. The vessel was laid in November 1698 of the year, and its launch into water took place in April 1700 of the year. However, the fate of this ship, a copy of which was moored today at the Admiralteiskaya Embankment of Voronezh, was such that he began his service only 10 years after construction. In 1711, the warship participated in blocking the Azov coast from the approach of Turkish galleys. He commanded a squadron, which "Goto Predestination" included, Cornelius Cruys. Two years after the ship’s entry into “active” military service for a variety of reasons, it was decided to sell it. And it is interesting that the ship was sold to its main rival in the Black Sea-Azov region - the Turks. The amount of the transaction, according to historians, amounted to 26167 tsekhinov (Venetian chervonets). 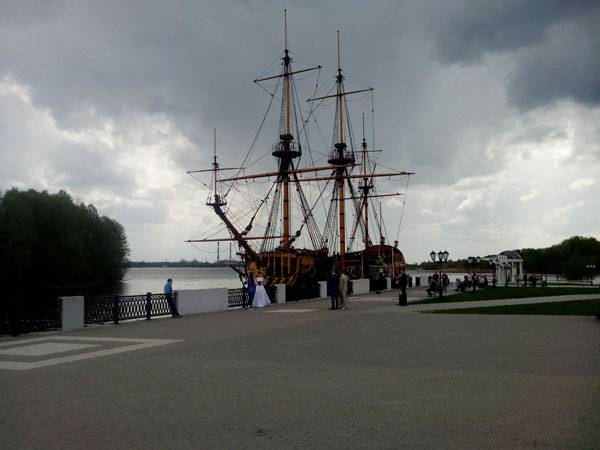 Voronezh museum composition allows you to see the weapons of “Goto Predestination” and the life of the crew during the entry of the ship into the Russian fleet. Tin dishes, hammocks for sailors, rope fastening of tables for eating, sleeping places for commanding personnel, allowing to sleep only in the half-sitting and half-lying position (according to legends, sailors were afraid to sleep while lying down because of the lying sailor could “think” that he was dead, and prepared to take his soul). 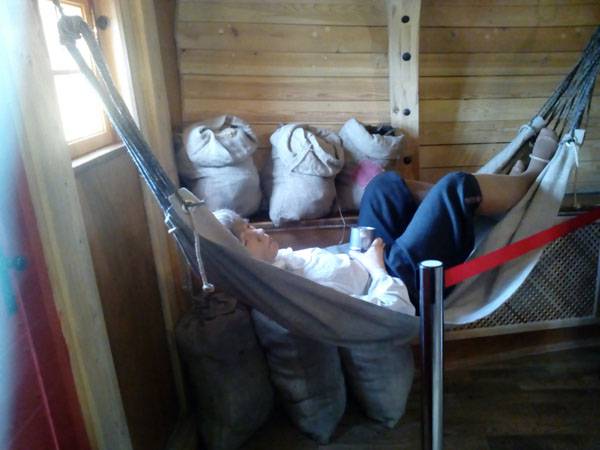 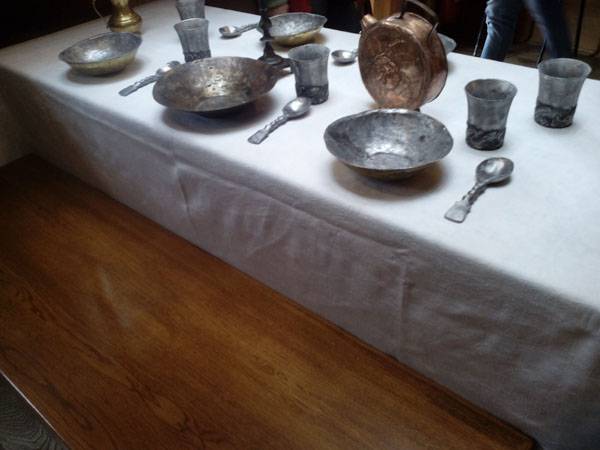 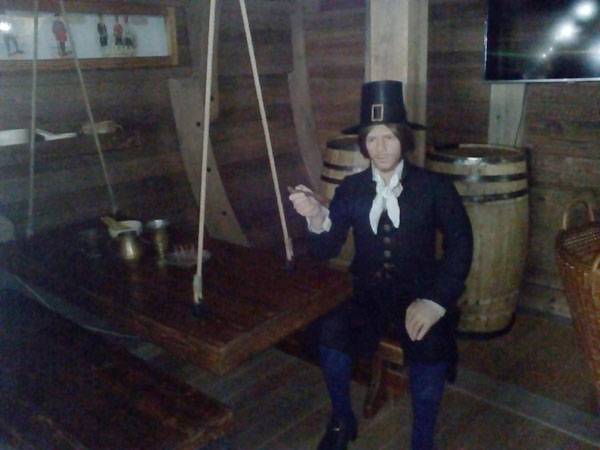 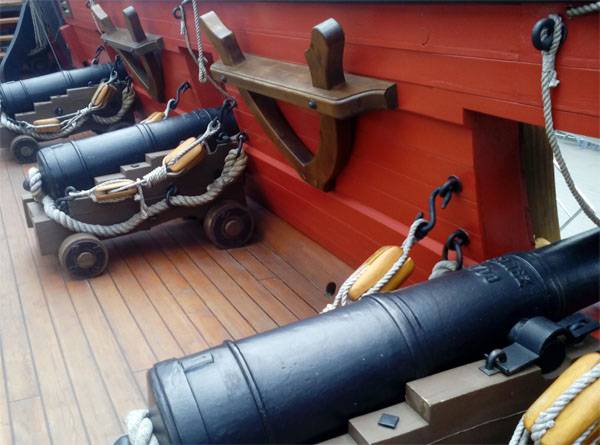 The modern Navy is the main component and the basis of the sea potential of the Russian Federation, as well as the most important tool for implementing the state’s foreign policy. The Russian Navy provides reliable protection of Russia's interests in the World Ocean.

A great gift to all Russian naval sailors can be considered the laying of the next nuclear submarine Yasen-M at the Sevmash enterprise in Severodvinsk. Multipurpose submarine called "Perm". Recall that the leading submarine cruiser of this series, Severodvinsk, was transferred to the Navy of the country in June 2014. The entire series of multipurpose submarines of this class will be part of the fleet before the 2023 year.

"Military Review" congratulates all sailors and veterans of the Navy on the holiday!