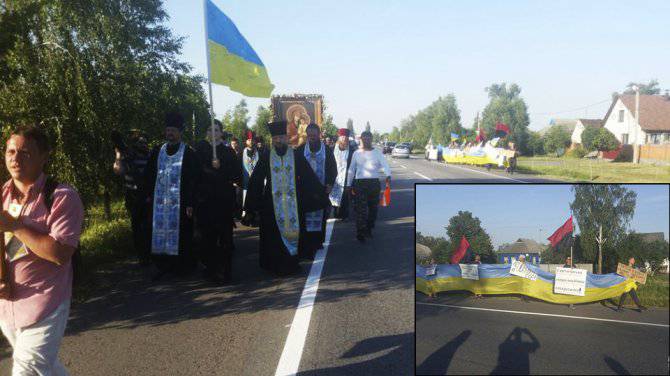 Supporters of the “war party” in Ukraine are trying to push people not only on political and national issues, but also on religious ones. "The confrontation of two religious processions" - this is how one can characterize the events of the end of July in Kiev.

27 July ended All-Ukrainian procession for peace, organized by the Ukrainian Orthodox Church of the Moscow Patriarchate. He passed under the loud hooting of supporters of the “Right Sector” (an extremist organization banned in Russia), under the numerous threats posed by Ukrainian officials, under the persecution of the Ukrainian media. Despite all this, more than 80 thousand people took part in it.

And the next day, June 28, in Kiev, took place in peak of the first, another “religious procession” (if this event, of course, can be called so), organized by the UOC of the Kiev Patriarchate - pseudo-patriots of Ukraine, supporters of the schismator and sectarian Philaret. Far fewer people participated in this event - about 15 thousands.

Those who do not want peace, specially organized the second “religious procession”, because they were literally enraged by the fact that the participants in the All-Ukrainian religious procession for peace were not afraid to come from all over the country and arrive in the capital.

But what did this schismatic quasi-religious procession look like? In Kiev, there was a crowd in embroidered shirts, sang "patriotic" songs. Every now and then there were shouts of “Glory to Ukraine!”, “Ukraine need a mustache!”, Etc., up to “Death to the enemies!” The flags of the notorious “Right Sector” and the nationalist party Svoboda flashed through the crowd. In fact, it turned out another right-wing procession, only masked by icons.

What is characteristic is that both the Ukrainian state structures, and the supporters of nationalist organizations, and even the militants of the punitive battalions in every possible way hampered the first Crusade process, but many more people took part in it than in the second organized by the philaretists - the one that turned into a nationalist demonstration. Although the second event no one interfered and did not threaten.

What did not say ukrochinovniki about the procession for the world! It got to the point that its participants were offered ... crucified on crosses. They were accused of being provocateurs of Moscow, separatists, “quilted jackets”, “Colorado”, etc.

With the support of Ukraine’s leading state-owned media outlets, all pravoseki and militants of the punitive battalions threatened people who prayed for peace that they would not be allowed into Kiev, not released alive, subjected to “civilian detention”.

Apparently, at the last moment, the Ukrainian illegal authorities, seeing how many people had left, nevertheless decided not to exacerbate the situation and prevent the Nazis from persecuting civilians. Therefore, in Kiev, the buses were offered to the worshipers, and law enforcement agencies did not allow the radicals to arrange a bloody massacre.

After the procession ended, ukroSMI cheerfully reported that "everything went quiet." Mr. Avakov, the Minister of the Interior, said that the National Guard and the National Police had worked together, provocations and skirmishes were avoided.

In short, quiet, smooth and grace - and this after the wildest pressure! But was it really so rosy?

Not! There were many illegal actions during the Religious Procession, but they did not come from those who were branded as “provocateurs”, “separatists” and “Kremlin spies”. But the law enforcement officers of Kiev and Mr. Avakov personally preferred the crimes of the neo-Nazis to “overlook”.

The Ukrainian authorities and the media preferred to “forget” that provocative attacks were carried out on participants in the Religious Procession in Zhytomyr and Poltava. “Lost” that in Odessa the so-called “automaidan” did not let out the majority of people who wanted to join the prayer for peace.

It must be said that in Odessa all this was done extremely tough and cynical. People threatened to burn alive. Given the events of 2 in May of 2014, these threats were particularly vile.

UkroSMI cheerfully reported that the carriers of Odessa themselves refused to carry the participants of the Religious Procession to Kiev. But they did it because Avtomaydan threatened to burn the buses, called to pierce the tires and beat the windows. “Before Uman there are three posts that will no longer joke and talk. Carriers are not worth it !! ", - said the so-called" patriots of Ukraine. "

The Odessa Diocese appealed to the law enforcement agencies on this fact, but they “washed their hands”. When radicals approached the Odessa St. Panteleimon monastery, where the column was going to, and began to openly threaten the drivers, the police didn’t do anything. As a result, only few Odessa citizens were able to escape from the city and take part in the procession.

The picture of "grace", issued by Avakov, spoils another incident. In Kiev-Svyatoshinsky district, on the way of the Religious procession, a grenade was laid. Advisor to the Minister of Internal Affairs Zoryan Shkiryak acknowledged: “A grenade, which was discovered on the way of the so-called religious procession, could kill more than one person. Therefore, I think that the consequences would be very deplorable if, God forbid, we would not have worked quickly and would not respond promptly to this emergency situation. ”

Most likely, the grenade was laid by the participants of the so-called "ATO" in the Donbass, but it is unlikely that the guilty will be punished. In addition, on the way of the followers, they discovered several more models of explosive devices - all in order to sow fear.

Summing up the procession of the procession, Avakov also said that a group of six people was arrested when she unfolded a poster “Donbass is the Russian world”. They “rest in one of the police departments,” said the minister.

At the same time, militants were detained who attempted to attack the participants of the Religious Procession in Kiev. Avakov commented on their fate as follows: “Three patriots who tried to stop this church event with harsh movements - they asked not to create a chance to provoke anti-Ukrainian forces, and after the conversation the guys went home.”

In general, for the poster - a prison. And for an attempt to attack people - a preventive conversation, and even then only with three ...

You can say one thing - anyway, those who wanted to pray for peace, won a moral victory over the Bandera demons, who yearn for war. Because they were not afraid of unprecedented and monstrous threats, and there were much more of them than the schismatics, sectarians of Philaret, who decided to speculate with religion.

Bandera counteract the procession for peace