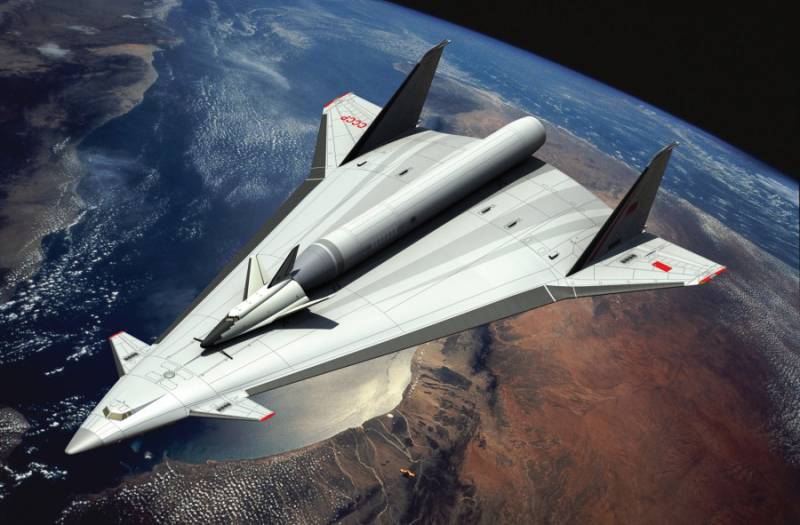 In the photo: an aerospace plane developed as part of the M-19 project.

Almost all domestic aviation design bureaus tried themselves in the space and rocket field. It’s enough to recall the Spiral aerospace system developed in the mid-1960s at Artem Mikoyan Design Bureau-155 or the Sukhoi Design Bureau in the mid-2000s in the project to create a winged version of the Clipper manned space shuttle. However, the first projects of vehicles using aviation principles for solving space problems appeared in the second half of the 1950s. One of the first such developments began OKB-23 under the leadership of Vladimir Myasishchev.

In March, 1953, Sergey Korolev began work on his famous intercontinental rocket R ‑ 7, which in October, 1957, launched the First Earth Satellite. A year later, in May 1954 of the year, a Resolution of the USSR Council of Ministers on the development of intercontinental cruise missiles (CRMD) was issued to attack targets in the United States. The decree provided for the presentation of complexes for joint testing in the first quarter of 1957.

As a result, two aviation design bureaus were involved in work on this subject:

• and Vladimir Myasishchev OKB ‑ 23 for the development of the Buran CRMD (“40 product”) designed for a thermonuclear warhead with an initial mass of 3,4 tons.

The Buran CRMD consisted of a winged marching stage, designated the “41 product”, and four launch accelerators (the “42 product”) with liquid rocket engines (LRE). The separation of the starting accelerators occurred at Mach 3. In 1956, the Council of Ministers issued a resolution on increasing the power of the Buran warhead, which increased its mass to 5 tons. In this regard, a new conceptual design of the “40A product” was developed. In 1957, pilot production of OKB-23 built the first cruise missile, designed for a new warhead, and its bench tests began. However, in the same year, the Queen of the R-7 rocket reached the intercontinental range. Cruise missiles were only developed and tested. In addition, they had more flight time to the target, were more vulnerable than ballistic missiles due to the lower altitude. Therefore, before the flight tests "products 40A" it did not come.

By decree of the Central Committee of the CPSU and the Council of Ministers of the USSR from February 5 of 1960, the development of the Buran CRMD was stopped.

From space on the wings 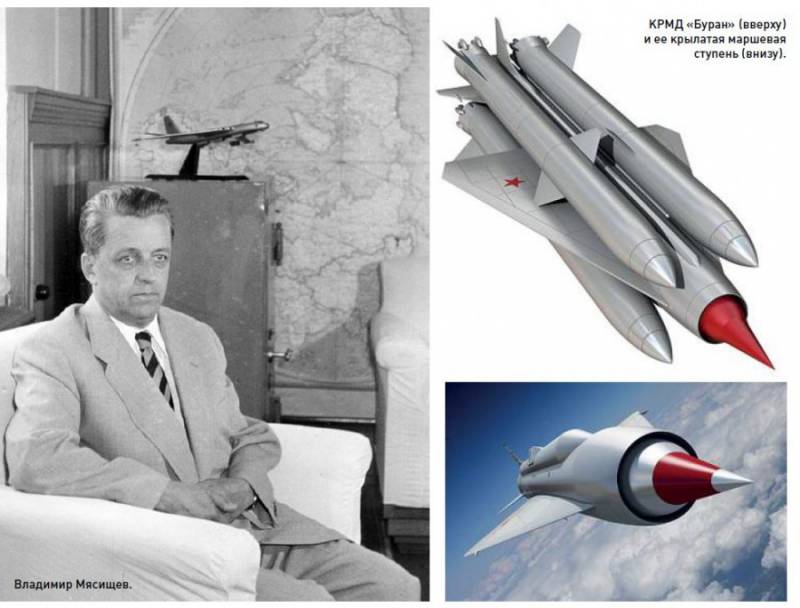 Soviet aircraft designers, who in the second half of the 1950s under pressure from the political leadership of the country were gradually forced to move away from the main aircraft-building subjects in favor of rocket and space, the idea of ​​an aerospace vehicle seemed quite logical and correct. The rapid growth of the speeds and heights of post-war aviation seemed to predict an inevitable transition from supersonic to hypersonic speeds and space flights.

“By the time of launch of the first satellite, jet aircraft had actually approached the boundary of space, more precisely, to the upper boundary of the atmosphere, but only from below,” says Vadim Lukashevich, Ph.D., historian of aerospace systems, author of the site “Buran.Ru”. - Sputnik opened new perspectives for aviators, having accelerated for decades already the desire for new frontiers. Another motive for the advancement of the aviators into space was the desire to protect themselves from the persecution of aviation, which was undertaken by the country's political leadership in the person of Nikita Khrushchev at the end of the 1950s. Most of the aviation design bureaus were either forcibly transferred to the missile theme, or were forced to “voluntarily” engage in it for the sake of survival. ”

Myasishchev was one of the first chief designers who initiated space projects. Almost in parallel with the work on the “40 product”, in 1956, its OKB-23 took up work on a hypersonic orbital rocket plane with a planned descent and aircraft landing. Vladimir Mikhailovich called such a device "satelliteloid."

Before 1957, in the OKB-23, together with NII-1 and NII-4, research and design surveys were conducted to study the effectiveness of various types of long-range aircraft. The conclusion made in these works determined the main direction of research: “The most promising and practically feasible in the near future will be inertial-aerodynamic (cruise-ballistic) missiles with near-circular and circular flight speeds, called satellite-like products.” Among such devices, the most interesting are rockets, the last stage of which can be a small-sized inertial-circular plane of reusable action - satellite (or intercontinental rocket-plane) ... "

Among the reasons for the desirability of continuing work on the manned "satellites" Myasishchev pointed out:

“... - the pilot is a necessary element of the control system, if circumstances that arise during the flight cannot be taken into account with the help of a computer;

- the pilot [himself] is the lightest and most versatile computer necessary for control;

- manned aircraft can fly itself to the right place, which simplifies the problem of transportation and combat supplies;

- the rocket plane has a clear tactical advantage over all other airborne rocket launchers, since it ensures that the maximum possible speeds, altitudes and flight ranges are reached. "

These flight-technical capabilities of the winged satellite, unattainable for other aircraft and spacecraft, with multiple actions, opened up broad prospects for using it as an effective means of reconnaissance of the enemy’s territory.

"Rocketplan could also be used for scientific purposes to probe the upper layers of the atmosphere (inaccessible to either satellites or aircraft), to communicate with the Earth’s inhabited satellites (manned stations) and to transport orbital cargoes (fuel, equipment, building materials, etc.) ", - wrote Myasishchev. 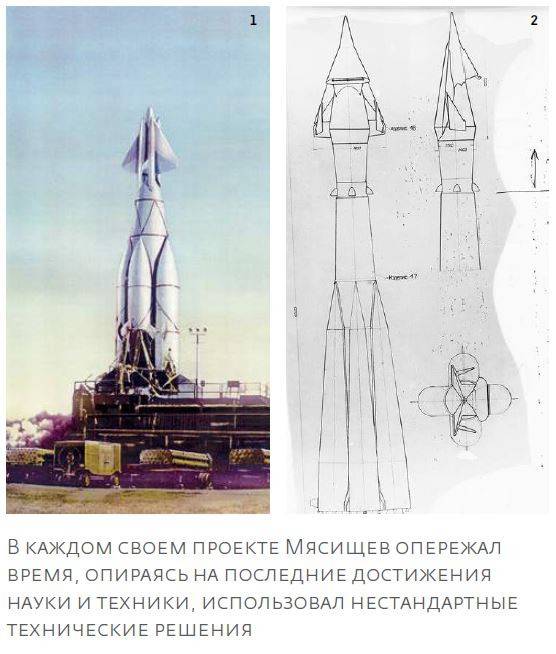 In the photo: 1. Draft 46 rocket planner with a planning descent.

2. Installation scheme of a manned reusable aerospace aircraft “product 48-IV” on a launch vehicle “product 47” (own development of OKB-23).

The first stage of development involved the creation of an experimental apparatus with a crew of one person for the development of a planning descent, including landing, on-board equipment and research of human activity in space flight conditions. Four variants of the device were considered:

According to the stories of Evgeny Kulagi, Doctor of Technical Sciences (veteran of OKB ‑ 23, later - Chief Designer of the State Space Research and Production Center (GKNPT) named after MV Khrunichev), “Manned Reusable Aerospace Aircraft (HQS) [“ 48 product -IV ". - Ed.] Was a small arrow-shaped aircraft with a flat bottom. In terms of the apparatus had the shape of an almost regular equilateral triangle. In fact, it was a flying wing of small elongation.

According to Kulagi's memoirs, the 48 rocket glider was created in collaboration with the OKB-1 (S. P. Korolev) and the NII-1 (M. V. Keldysh). Korolev was very respectful of Myasishchev. They met back in 1939 in the “Tupolev sharashka” - TsKB ‑ 29 of the NKVD, to which both fell as “enemies of the people”. Since then, Myasishchev and Korolev have maintained personal contacts.

Work on the topic "48" reached the heat test design samples with thermal protection in a jet engine jet. However, the campaign against military aircraft did its job: in October 1960 of the year, OKB-23 was transferred as a branch number 1 to the OKB-52, led by Vladimir Chelomey, dealing with missile themes. Myasishchev was appointed head of TsAGI.

In space from the "Cold"

Being engaged in aviation-related topics at the EMP, Myasishchev continued to work “for space”. As part of the “Cold-2” theme, designed to study the specific features of the use of liquid hydrogen in aviation, the design of the M-19 aerospace plane was developed at the Electromechanical Bureau.

Myasishchev turned the work on the project into a large-scale study of the problems of the development of hypersonic aircraft with associated solution of the problems of space exploration. Within the framework of the M-19 project, work was carried out in four areas:

About the topic of M-19, Myasishchev once remarked: “This work will apparently become a swan song for me. Of course, I will not find her ending. But it is very important to go in the right direction ... "

In February, the Resolution of the Central Committee of the CPSU and the USSR Council of Ministers “On the creation of a reusable space system” was issued on 1976. It was based not on the M-19 project, but on the Energy system — Buran, developed by Energia and largely copying the American Space Shuttle system. To create a glider for the Buran orbital ship, the Minister of Aviation Industry Peter Dementiev was forced to create the NPO Molniya. It includes EMZ, CB "Lightning" and CB "Petrel". So the firm Myasishchev was involved in the creation of the second "Buran".

The team of EMZ developed and manufactured a pressurized cabin for the Buran crew. Based on the 3M bomber, the 3M-T aircraft transporter was created at the factory (the open name is VM-T Atlant). Two bomber were converted for flights. They carried out more than 150 flights to the Baikonur cosmodrome and to Kuibyshev, transported all the large-sized elements of the Energia-Buran space system, including tanks of launch vehicles and several orbital spacecraft.

The talent of Vladimir Mikhailovich was that in each of his projects he was ahead of his time, relying on the latest achievements of science and technology, used non-standard technical solutions, transferring the principles of creating aviation technology to the space industry. Today teams EMZ them. V.Myasishcheva and GKNPTs them. MV Khrunichev, who grew up from OKB ‑ 23, continues to work on projects of promising aerospace vehicles for various purposes.

“Myasishchev did not make secrets from the accumulated experience, which was widely used in other aircraft building companies, including without reference to authorship,” said Gennady Dermichev, veteran of OKB-23, head of the design department of Salyut Design Bureau. - Strikes the breadth of his creative range. On the initiative and under the leadership of Vladimir Mikhailovich, the projects of aircraft with nuclear engines were developed; a re-entry headlamp type spacecraft with a rocket-powered helicopter propeller providing maneuvers and accurate landing; booster and more. His design school lives, developing and enriching himself both in Fili and in the OKB of his name in Zhukovsky. ”