July 29 2016
230
Do we have elections on the nose? How many "smart people" appeared on TV screens! How many of those who suddenly attended to the welfare of the common man, about saving the budget, about the future! Touches, you know. You begin to believe that the day after the election, life will begin to drastically improve.

If not for these aspects and nuances.

Sometimes you don’t even think about some things, but once you hear another “smart”, you’re starting to think that either you don’t understand anything or you put a next “guardian” in the zomboyaschik. Who knows better than you how to do.

So everything seems to be right. And about old people in nursing homes is true. And about the road. Even about pensions and salaries is true. And about the communal. Only now I recall the fate of many countries where this point of view has won. And the experience of the ancestors, genetically laid down by the father and mother, is also somehow against such a formulation of the question. I do not want to walk in lackeys. Nature is not the same.

And sometimes it rushes from the air, which tempts us to go to the far box, where the diploma of military school graduation lies, and once again remind ourselves that yes, I studied. And I have to think. In contrast to the "guardians".

A strange topic began to raise in the debate. The topic of unnecessary costs for weapons and equipment. Why do we need new, if most countries feel great on our old technology? And those who are trying to give a hint about the country's defense, immediately receive the label "hawks". You what? Can you seriously think that Americans need a war? Well, you, old man, and a moron. Everyone understands that war is the destruction of the entire globe.

Especially for some reason goes to our armored vehicles. The euphoria of "Almaty" has passed. More precisely, the tank became a reality. But the BMP is still causing concern to the "guardians for the fate of the people." Why do we need so many BMP? There are excellent BMP-3, BMP-4. The following are developed. And then the BMP T-15, BMP "Kurganets", BMP "Boomerang". And all the cars are different. Where are we so much? For what? There are so many more problems in the country, and here all these armored boxes ...

And what is most interesting, the mass of the audience is conducted on such an approach. Judging by the polls, calls, SMS and other related nonsense.

It is clear that who watches the "1 channel", that on the "Star" has nothing to do. Who lives on "Peekaboo", that "Military Review" is wild and incomprehensible. However, we also thought about this topic. The box is he, ****, contagious. 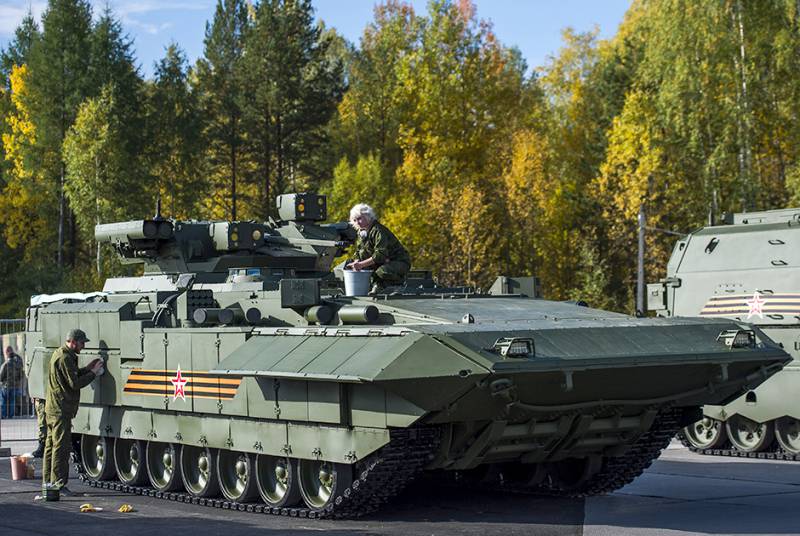 BMP T-15. The heavy car. Weight 50 tons. Armor protection is not inferior tank. Carries 9 people. The corresponding dimensions are 9,5 meters in length and 4,8 in width. Even an engine of 1500 forces was created specifically for this machine.

Accordingly, such a machine will cost accordingly. Tank, he is a tank. Let it be treated with something like that ...

The BMP T-15 is a combat vehicle of the network-centric warfare, that is, it is capable of transmitting data on detected targets to destroy tactical echelon to other vehicles and, in turn, receive tasks for the destruction of targets that are adequate for BMP armament. The practical implementation of such a scenario is made through a unified management system of the tactical level.

This is actually a multipurpose combat tool that allows solving on the battlefield both the tasks of countering the enemy’s tanks and BMPs and the air defense tasks. The anti-tank complex is focused on the destruction of modern tanks with active defense, air defense is capable of working both on the UAV and on anti-tank helicopters. Type "Apache".

The main force is modularity. T-15 in addition to everything can change weapon systems. It can be “sharpened” in air defense with the help of the “Baikal” module with an 57-mm naval anti-aircraft gun, you can make an 120-mm mortar, you can make an ATGM complex. 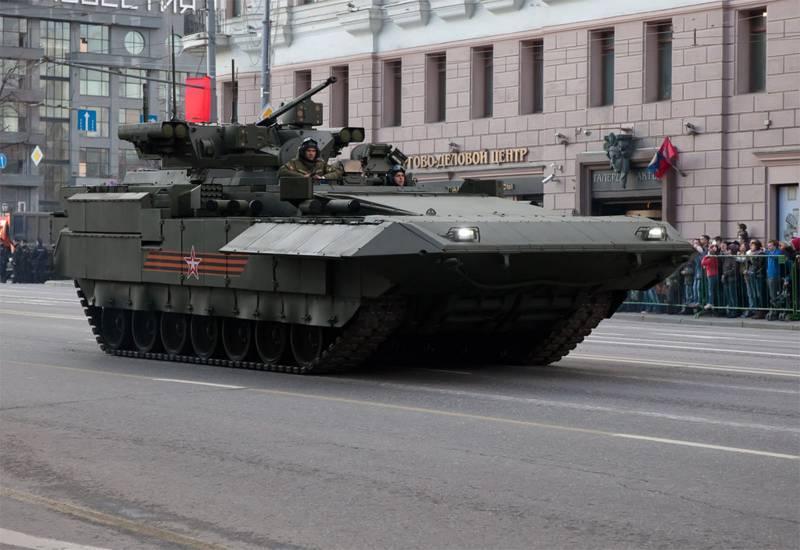 A heavy tank support vehicle capable of following them at least to the place of use of nuclear weapons, and carrying a whole branch of infantry as support. 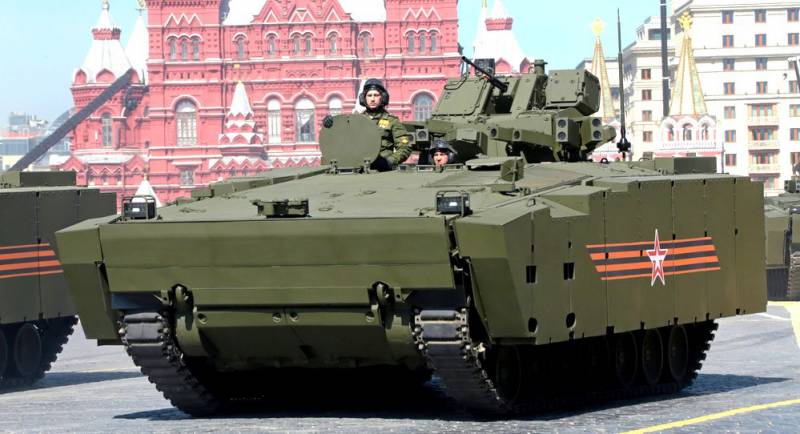 BMP "Kurganets" - a lighter car of the middle class. 25 tons of weight. Able to carry 8 people. Accordingly, the dimensions are reduced. 7,2 meters in length and 3,6 in width. However, this reduction was achieved by reducing protection. Armor machine bulletproof. True, the crew is protected by a transmission, a new complex of active protection along the sides, the frontal armor is significantly enhanced. For such a machine is enough 800-strong engine. The machine has good mobility and, most importantly, can swim.

It is on this machine will lay the main burden in the armed forces. She will become the main BMP. Naturally, the price of such a machine is much more democratic. 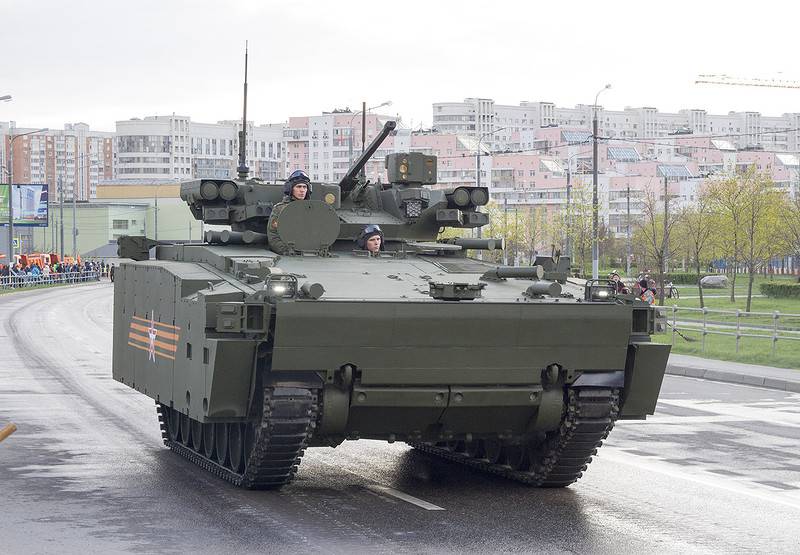 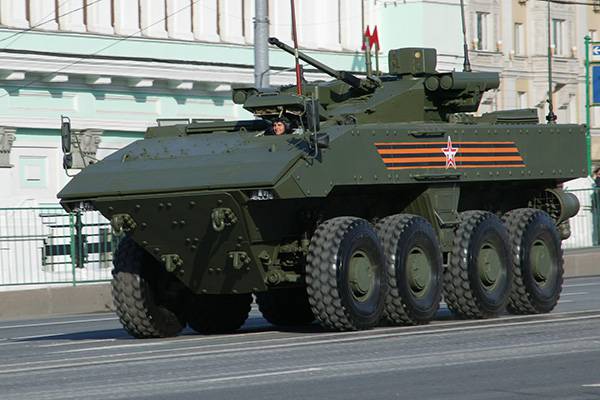 BMP "Boomerang". This is a wheeled car. Accordingly, the weaker BMP is protected T-15, but about the same as the BMP "Kurganets".

Wheels, unlike caterpillars, provide sufficient speed and range. With 510-strong engines provides speeds up to 100 km per hour and a power reserve of 800 kilometers. At the moment, Boomerang is considered one of the best cars in its class. The weight of the new BMP is less than the weight of the Kurgan. But insignificantly.

And again, the ability to change the configuration of weapons. From the standard "Boomeranga-BM" to heavier things. 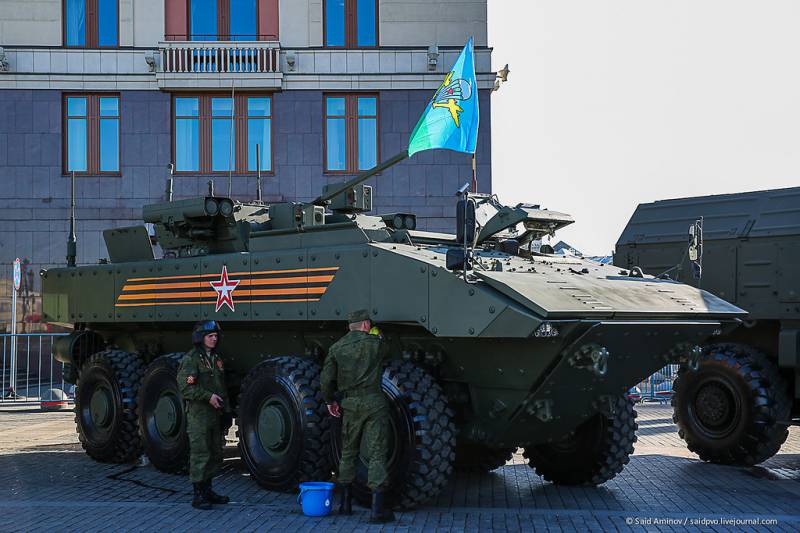 And now we will answer the question of "people-lovers". Why do we need so many completely different cars? Why such costs? Universal BMP would be cheaper. Yes, and repair universal machines more convenient. Remember the famous film "In war, as in war ...". An episode with a burden? "I'll get to the first tank, take off, and go further."

But if we are already talking to "economists", then we will have to speak in the language of numbers.

Modern military conflicts, in which Russian and other units participated, are carefully analyzed for the necessary sufficiency of weapons and armored vehicles to ensure the fulfillment of the tasks received. Any army of peace is built on this principle.

In addition, most armies go to the contract method of formation. And that means, a soldier must be prepared in his specialty as "excellent." Training such a soldier is not very cheap. These are not dozens, they are hundreds of thousands of rubles, and in some cases millions. And this "dear" soldier must be protected. War in the style of the second world will not. Specialists will fight. And to replace them quickly will be problematic. So, there will be problems with the use of equipment and weapons.

Will the BMP with anti-bullet armor be able to ensure the safe movement of soldiers on the battlefield in the case of the use of anti-tank guns? Even in the case of using conventional anti-aircraft guns, the survival options of such machines are few.

And can even middle-class BMPs like the Kurgan type be used effectively by scouts? Alas, but speed largely determines the actions of such units. Yes, and they act, most often will be where the danger of working on them artillery is minimal. But the wheels do not have such a cross as the tracks.

We think the need for different types of BMP is obvious. But the cost question is still worth it. So spending or saving?

The answer is saving! In what?

In fact, the main thing is not the BMP themselves. The main thing - the platform. Only three platforms that allow you to mount on them a variety of weapons and equipment. So, we receive not one car, but a line of cars of the most various purpose. Thus, the defense industry has ensured the unification of military equipment.

Moreover, the Boomerang combat automatic complex is installed on all the machines. That is, repairs on the battlefield can be made even in sets from other BMPs. By the way, the Boomerang complex includes weapons systems that are already in service and used either as an independent weaponor as a module of other systems. For example, anti-tank missile complex "Kornet". Or 30-mm automatic gun.

The same modular principle is used to create the BMP itself. Repair and replacement of such modules can be made by repair teams right on the front line. Using either your own or "foreign" modules. Both new and removed from non-viable machines.

We talk a lot about rearming our army. We perfectly understand that it costs a lot of money. And the economic situation is such that there is no extra money. However, based on the foregoing, it becomes clear that our defense made a feat. This is not a beautiful word, it is a fact.

Rearming the army and not ravaging the country is indeed a feat. And all the groans about unnecessary spending need to stop.

And yet, the platform is the coming future. While not everyone understands this. But it is so. The fact that practically any weapons and equipment can be put on the platform will allow the defense industry to give the army what is necessary in a specific period as soon as possible. Yes, and the latest designs will be created with the possibility of their speedy installation on such platforms. The prospects are huge.

This is the practical embodiment of Putin’s words about the necessary sufficiency of the army. We have what we need, but we will always have as much as necessary.

It is a pity that not everyone in the country understands this. Especially viewers of the "1 channel" ...

Ctrl Enter
Noticed oshЫbku Highlight text and press. Ctrl + Enter
We are
Is the "old" well forgotten to become the "new"? Part-2. At the call of honor and dutyLook because of the armor. BMP-3 too early to send to rest
Military Reviewin Yandex News
Military Reviewin Google News
230 comments
Ad