You do not bomb yet, but we will separate the "moderate" from the "unlimited"

July 29 2016
57
US Secretary of State John Kerry said on Tuesday that he expects to report in early August about plans for closer military cooperation with the Russian Federation regarding Syria. On the night of July 28, one more thing became known: American diplomats are asking to stop targeting militants in Syria for one week. During this period, the Americans hope to separate the forces of moderate opposition from terrorist groups. 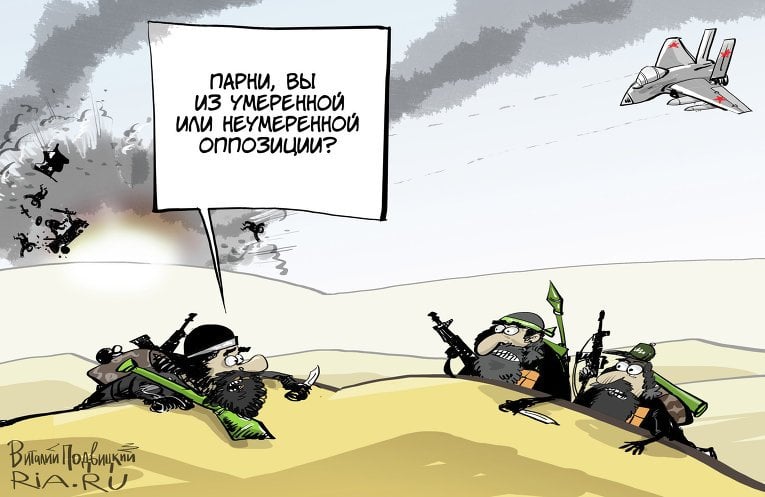 On the American attempt to separate the goats from the sheep's newspaper "News" told a source familiar with the negotiations on the Syrian issue.

Washington again stands up to defend those groups in Syria that the Kremlin identified as terrorist (“Ahrar al-Sham” and “Jaish al-Islam”). They in the States are trying to pass for moderate opposition, the newspaper notes.

The newspaper reminds that at the recent talks Russian Foreign Minister Sergei Lavrov and his colleague John Kerry in Moscow (July 14-15), also at the ministerial meeting last July on the ASEAN ministerial meeting, the US delegation proposed a “silence mode” on 26 days. The purpose of the weekly “silence” is to dissociate the moderate opposition from terrorist groups.

The essence of the request of the State Department: the Air Force of the Russian Federation should stop air operations for a week; the forces of the international coalition led by Washington will do likewise.

“In this matter, the main thing is not to be out in the cold,” said Vladimir Komoyedov, chairman of the defense committee of the State Duma for Izvestia. - It should be understood that the silence mode can be used to redeploy terrorists and regroup forces. It’s already time to engage in a joint regime of silence, delivering coordinated strikes. The task we have with the United States is to achieve victory over ISIS. All of Europe suffers from them, and maybe half the globe. But America just woke up. We must address the fact that we have always been in relations with the Americans: the practice of 1945 of the year shows the expediency of coordinated actions. ”

Recall the ceasefire in Syria has been in effect since February 27. But there is no actual “silence”: firstly, this regime, according to the conditions, does not apply to terrorist groups; Secondly, in recent weeks, fierce fighting in Syria has led to the disruption of the cease-fire in practice. As a result, the strikes inflicted by either side of the conflict can be explained by the fight against terrorism. In this war, civilians are dying. The press wrote about the difficult situation in the Aleppo area and in other regions of Syria, where there is a fierce confrontation.

26 July it became known that Secretary Kerry hopes to present in early August a detailed plan for close cooperation and intelligence sharing with Russia on Syria. Reports about it RIA News" with reference to Reuters.

“I hope that approximately at the beginning of August we will be able to stand in front of you and tell you what we can do with the hope that this will change the course of the war and the situation of those who live in Syria,” the agency quotes Kerry.

According to the Secretary of State, during the meeting with Lavrov, the implementation phase of the plan was designated, including meetings at a technical level in order to "respond to the concerns of the American special services and the armed forces." Kerry noted that progress has been made on the plan.

Expert Magazine also reports that John Kerry came out in defense of close cooperation with Russia on Syria, despite the skepticism of Pentagon officials and intelligence services, including Secretary of Defense Carter and Chairman of the Joint Chiefs of Staff of Dunford.

Against the background of the coming “close cooperation” in Washington, however, they make statements that can lead to the exact opposite of cooperation. From here and undisguised skepticism of many officials in the United States about the likely cooperation with the Russian Federation.

Journal "Politico" Recalls that recent statements about Moscow’s attempts to “influence” the election race in the United States through hacker attacks present new arguments to the critics of Barack Obama. The American president in the article is referred to as a person trying to bring peace to Syria. John Kerry is working with him in a pair, seeking to promote cooperation initiatives with the Russians. The overall goal of the new plan is to reduce the number of civilian casualties and finally create conditions for settlement.

Meanwhile, the plan promoted by Obama and Kerry drew harsh criticism within the government and in other circles. Opponents of the plan are confident that cooperation with Russians is a “slippery” path. Moreover, the plan looks like a "surrender to Russia." But those who believe that cooperating with Russia on Syria is not such a bad idea, there are few chances to defend their opinion in the United States. Those who wish to find common ground with Russia are confronted by a whole flurry of criticism from opponents accusing Russians of publishing thousands of emails from the National Committee of the Democratic Party. This was allegedly done by “hackers associated with Russia”. Opponents of cooperation with Moscow convince the public that the mail was hacked to help candidate Trump get through to the presidency: the latter speaks well of Putin.

The former high-ranking employee of the Pentagon, and now an expert on Russia Ivlin Farkas does not think that Moscow should be trusted. According to her, the Russians "have such goals that contradict ours" (American). Farkas admits that the Kremlin "intervenes ... in the electoral process" in the United States. As a result, the expert is skeptical about the idea of ​​cooperating with Moscow. In addition, she does not believe that any agreement with the Russians will subsequently lead to a positive impact on the lives of most Syrians.

Another person, a certain official from the administration of the White House, told the magazine that the US is well aware of all the dangers of making deals with Moscow. At the same time, this person assures that everything that is being done in Syria “does not require” American confidence and “is not built on it”. Integrity is not taken into account; we are talking about the fulfillment or non-compliance with the terms of the transaction: yes or no.

And another official, whose name is also not given, told the publication that, if Russia was involved in the hacker attack, Washington would take into account the influence of this event in other areas of cooperation.

Officially, Lisa Monaco, White House adviser on combating terrorism, spoke out recently about the hacker attacks and the likely reaction of Washington. True, she did not point specifically to Moscow.

Her words leads "Voice of America".

The United States will impose sanctions on those behind cyber attacks on transport and electricity systems. Sanctions will be applied, "when optimal conditions arise and when actions will promote the political interests of the United States," Monaco said at a conference on cyber security.

“Speaking frankly, we are experiencing a revolution of cyber threats that are becoming more and more constant, diverse, frequent and dangerous every day,” she said.

Monaco also introduced a new B. B. Obama directive, defining a “clear framework” for coordinating the actions of government agencies fighting in cyberspace.

Voice of America also broadcasts a statement by Deputy Press Secretary of the White House, Eric Schulz, which has already touched on the hacking of the systems of the National Committee of the Democratic Party. Mr. Schulz stressed that he would like to wait for the results of the FBI investigation: "We want it to be thoughtful, thorough and free."

Schulz spoke in connection with the earlier statement of the leader of the democratic minority in the House of Representatives Nancy Pelosi. She was categorical: “The Russians hacked (computer systems) of the National Committee of the Democratic Party. There is no question here. ”

Also recall that because of the scandal with the hacker attack and burglary of the head of the National Committee of the Democratic Party, Debbie Wasserman-Schulz had to leave his post. The dismissal, presumably, did not happen because of the hacking and the fact that the correspondence was published, but because the world public figured out from the published letters: the Democratic Party paraplay played up Hillary Clinton and interfered with Bernie Sanders. In short, it is very difficult to call the behavior of the top leaders of the Democratic Party democratic.

It is not surprising, therefore, that it will not be easy for democrats to build any relations with Russia (including in Syria), since they suspect that the Kremlin has relied on the Republican candidate - Trump.