July 28 2016
24
M240 (FN MAG) - a single machine gun, which is a modification of the Belgian machine gun FN MAG, adopted by the Marine Corps and the US Army. Also used in equipping Chinese tank "Jaguar". The machine gun is an automatic weapon, which is built on a scheme with gas-driven automation and locking the barrel. This machine gun is widely used in the American army, since the end of the 1970-ies, the weapon is continuously upgraded. The machine gun is not only used by infantrymen, it is also installed on various ground vehicles, helicopters and boats.

The version of the machine gun M240V is considered standard. This is a single machine gun for the Marine Corps and US Army, it is also in service with units of the Air Force, Navy and Coast Guard. In the infantry performance of this machine gun is equipped with a butt and bipod. In 2014, the machine gun was once again modernized, as a result of which the M240LW version appeared. This upgrade was carried out by specialists from Barrett Firearms. Barrett was founded in 1982. Its headquarters is located in the city of Murfreesboro, Tennessee. The main activity of the company is the creation and production of large-caliber sniper rifles.

It is worth noting that the US Army continues to search for light and powerful small arms to support special operations forces. The machine guns Mk.48 mod.0 and Mk.48 mod.1 that are already in service are not completely satisfied with the representatives of the special forces. Compared with the same single machine gun M240, having a receiver resource in 100 thousands of shots, the resource of the machine gun Mk.48 mod.0 is half as much - 50 thousands of shots. It is known that the higher the resource of the weapon, the more it will be in operation, the cheaper it will cost the army (weapons are purchased less often). At the same time, the mobility of the machine gun Mk.48 mod.0 is much higher than the mobility of the standard M240, since the former is practically lighter on the 4 kg. It is for this reason that the American army placed an order to create a lightweight version of a single machine gun M240. The new development was supposed to be lighter than the machine gun M240B on 2,5 kg.

For the first time, an upgraded version of the machine gun under the designation M240LW was introduced by Barrett in January 2015 at the SHOT Show 2015 weapons exhibition. The new model was the first attempt of this arms company to create a single machine gun. It was created on the M240B machine gun platform, but at the same time it became shorter by 127 mm and lighter by 2,7 kg compared to the original model. The maximum weight of the machine gun M240LW is 9,2 kg (without cartridges), and the length is 1118 mm. The machine gun is designed for 7,62x51 mm cartridges, has an adjustable butt, a new forearm, which is not in contact with the barrel and belt feed (cartridges for 50, 100 and 200 cartridges can be used). In addition, the machine gun received new quick-detachable bipod. 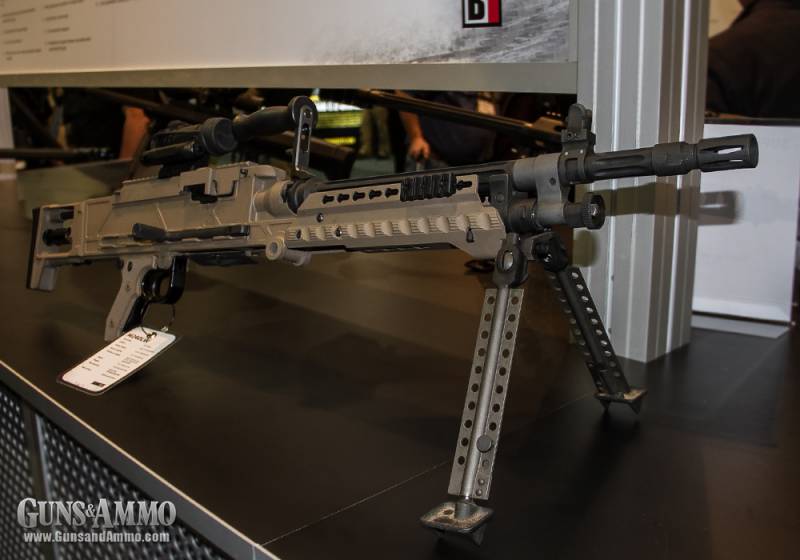 The company Barrett, which created its version of the lightweight single machine gun - Barrett M240LW, unlike the creators of the machine gun M240L did not use in its development of expensive technologies and materials to reduce the weight of the weapon. Instead, the company went the way of removing metal from the receiver and turned to new methods of its production. The rigidity of the receiver is provided by the use of ribs. The barrel of the machine gun is quick-detachable, it also has longitudinal ribs, which contribute to rapid cooling.
Automation machine gun Barrett M240LW works on the principle of removal of the powder gases. When fired, the powder gases are discharged from the barrel of the machine gun and are then used to divert the bolt and other mechanisms. A feature of the design of the machine gun is the protruding part of the gas tube, which is located under the barrel, it has a built-in regulator of the gas outlet. The regulator allows the shooter to control the flow of gas to the piston, depending on the type of ammunition used and other conditions.

On the inner walls of the receiver of the machine gun are protrusions that serve as guides for the moving parts of the weapon (bolt and bolt), during firing, they make reciprocating movement. The slide guides have a shape that provides a forced lowering of the locking lever of the shutter when it is in the extreme forward position. Directly at the bottom of the receiver is a massive locking protrusion against which the locking lever rests when the shutter is locked. 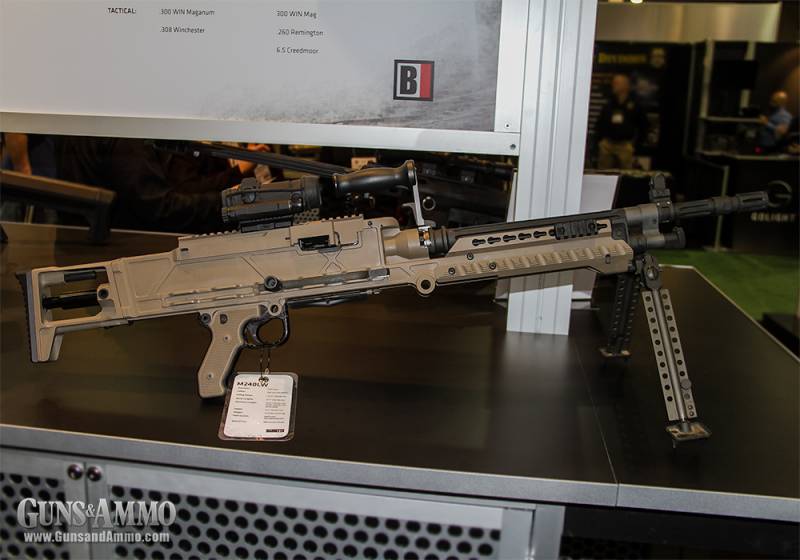 The gas regulator is connected to the clutch, which has three outlet openings through which the powder gases enter the atmosphere. In this case, the piston is affected by the minimum required impulse of powder gases, which ensures the operation of the automation of a single machine gun M240LW. If necessary, the impulse of gases acting on the piston can be increased. This may be necessary to overcome the frictional resistance, which may be due to the accumulation of carbon, sand ingress, thermal expansion of the heated parts. To increase the pulse, the shooter needs to turn the handwheel of the gas regulator installation, after which the gas coupling advances along the gas chamber and ensures the consistent closure of 3 exhaust outlets, after which all the powder gases from the gun barrel will act directly on the piston. The gas regulator can also be used to change the rate of fire of a weapon. This can be done from 600 to 1000 shots per minute. At the same time, the practical rate of fire of the original FN MAG machine gun is on the order of 200-250 rounds per minute.

The barrel of the M240LW machine gun is quick-detachable, it has longitudinal stiffening ribs, which serve both for its rapid cooling and for facilitating the design. The manufacturer’s website contains information on the use of two barrels of different lengths with the machine gun, which differ approximately in 10 cm. See the front section of the barrel of the machine gun and the flame arrester with slots, the handle for carrying the machine gun, which can be quickly change trunk. The machine gun uses a push-pull cartridge feed mechanism, the same as on the FN MAG model. However, this scheme was borrowed from the German machine gun MG.42, which is one of the most famous machine guns of the Second World War. The push-pull feeder cartridge ensures uniform movement of the tape when the shutter is moving back and forth. 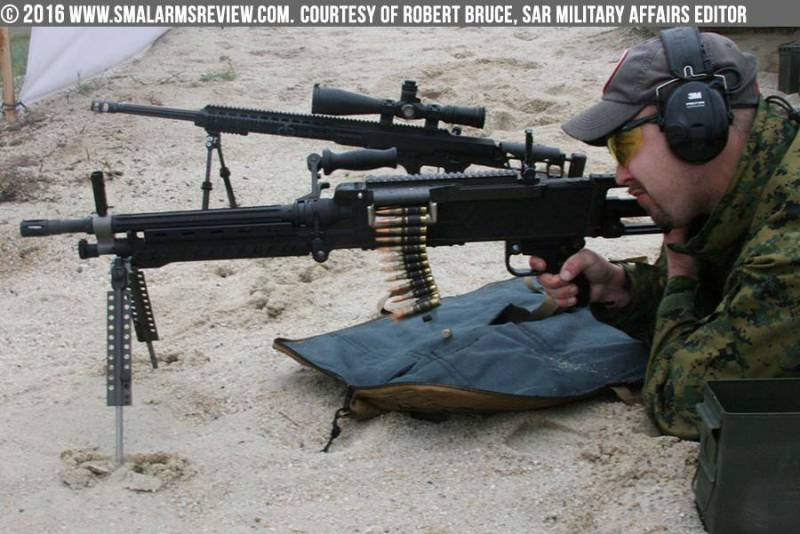 The sights of the Barrett M240LW machine gun consist of a front sight and a diopter pillar. Rear sight attached to the sector strip. With the help of a slider with spring-loaded latches, this bar can be set at a range of 200-800 meters, with 100 meters pitch. When turning the sector strip to a vertical position, the sighting range can be set in the range from 800 to 1800 meters with the same interval of 100 meters. In this case, the aiming is carried out through the open rear sight, which has a V-shaped slot, which is a part of the slider.

Reducing the single machine gun M240LW to normal combat height is made in the process of regulating the front sight, it is performed by raising it by a special safety bracket with subsequent repeated circular rotation of a certain number of half-turns. After the adjustment process is completed, the arrow must be replaced back into place. 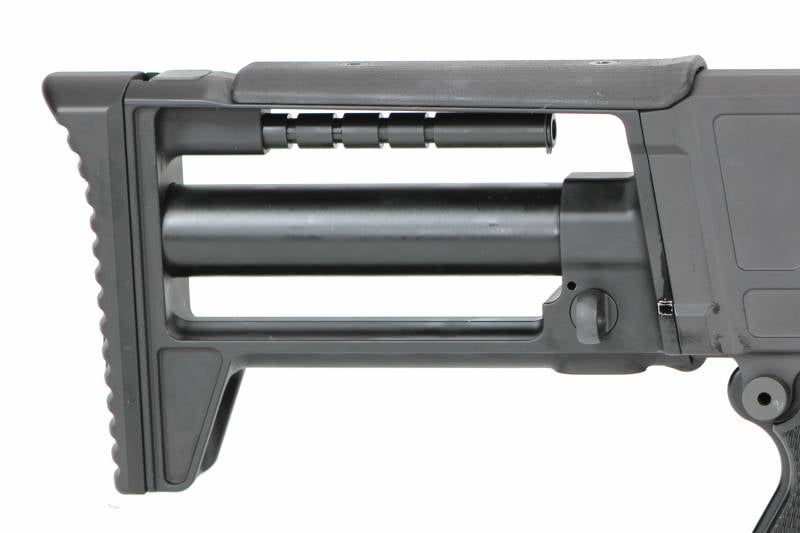 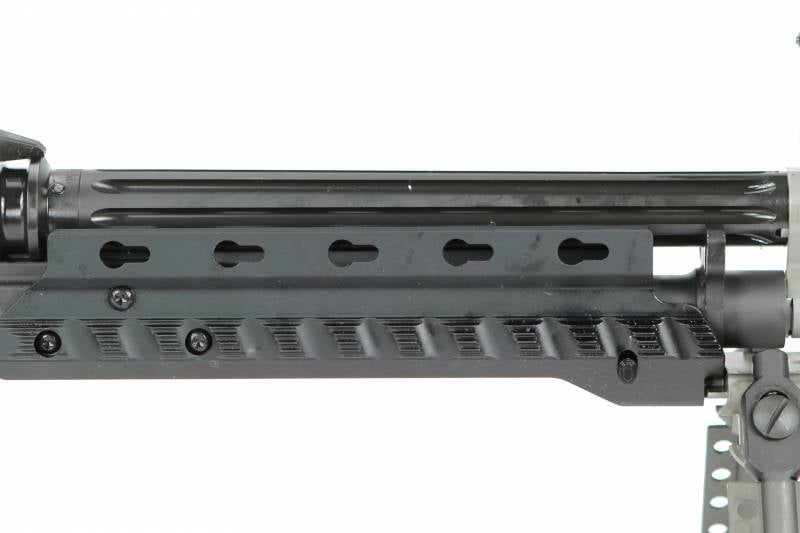 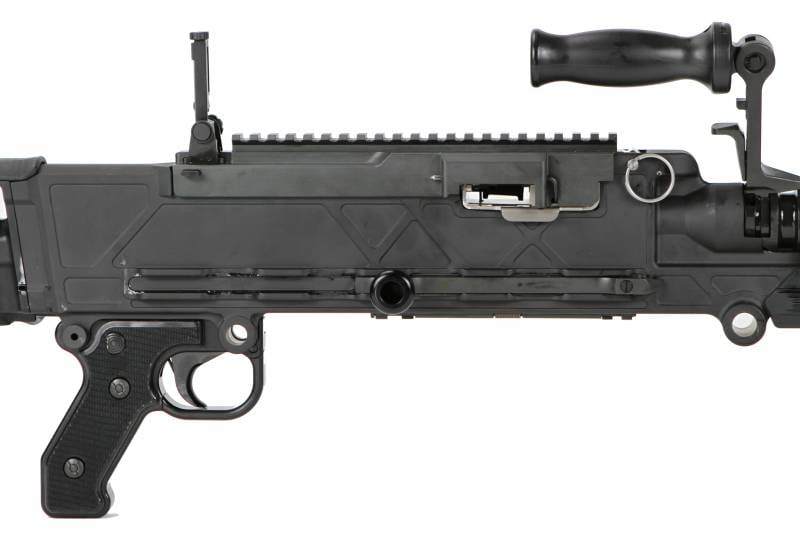 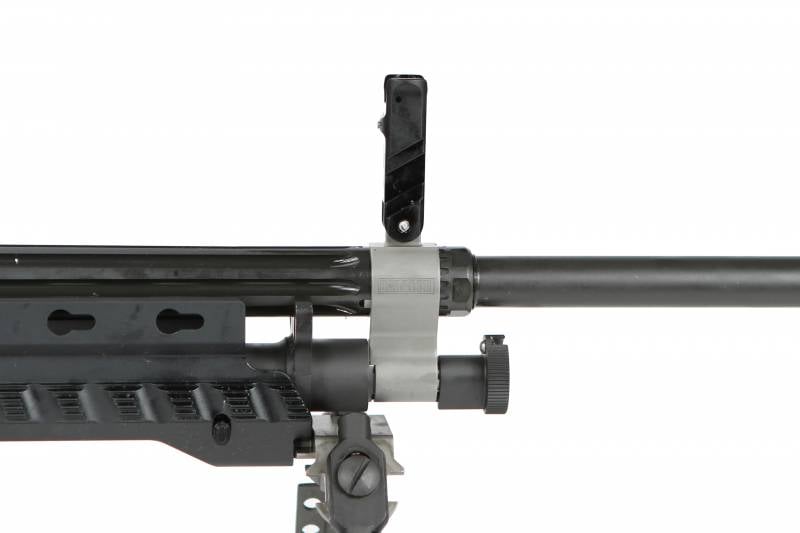 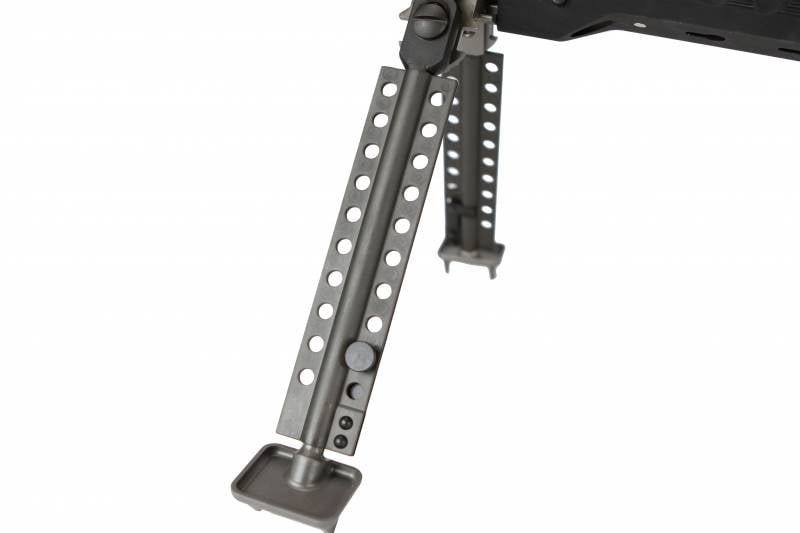