July 29 2016
207
At a recent press conference, Sergei Korotkov, General Designer of UAC (United Aircraft Building Corporation), said that at the end of August 2016, flight tests of the MiG-35 fighter will begin. Tests will be conducted until the middle of the 2017 year. Upon completion, it is planned to conclude a contract for the serial supply of aircraft to the Ministry of Defense of the Russian Federation. 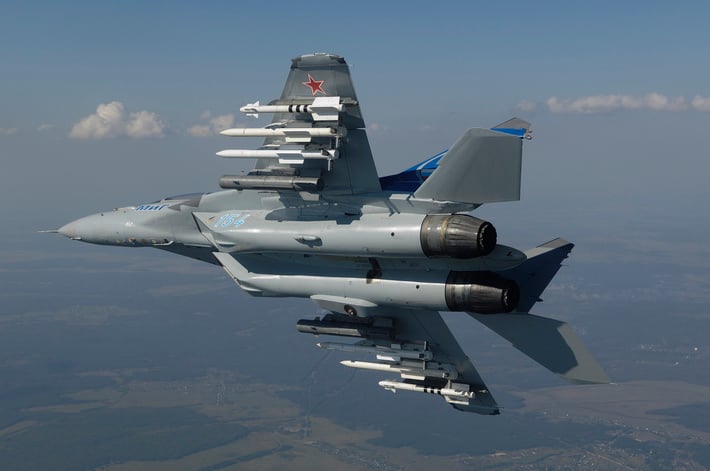 News from the category of good. However, as in any complex system (and testing a new aircraft is not a simple matter), there are nuances.

It sounds ridiculous, but true.

The MiG-35, which will be released on state tests, is an improved and modernized MiG-29М / М2. Outwardly, the difference is difficult to find, the planes are similar. And the main problem is that at the moment all the systems of the 4 ++ generation fighter are not ready. And representatives of the RSK "MiG" recognize this. So one "plus sign" is not yet so.

The question arises: what is the problem, because the work on the MiG-35 takes almost 15 years.

Many experts believe that the behind-the-scenes battle between the Sukhoi Design Bureau and the MIG MiG is the main reason for the delay. Lost the last. And this struggle did not begin yesterday. But in the end, the Sukhoi Design Bureau won a convincing victory in the battle for the budget. And MiG and other competitors got second roles and funding on the leftover principle. That could not affect the speed of new developments.

It is difficult to say whether it is good. Competition is a subtle thing. But back in the Great Patriotic War there was a certain division into light fighters of Yakovlev and heavier Lavochkin. And even the tasks they put at the end of the war were different, based on the performance characteristics. Who does not believe, read Golodnikova.

And then this trend continued. Only in the postwar years, the Lavochkin Design Bureau gradually switched to rocket and space technology, and the Sukhoi Design Bureau, previously engaged mainly in bombers and attack aircraft, transferred to the design and development of fighters.

My personal opinion is that the collapse of the T-4 project, which really represented a serious competition to the development of the Tupolev Design Bureau, was to blame. And it was decided to put everyone in their places.

Su-24 / 34 and Su-25 do not fit into the general scheme. But the genius of Pavel Osipovich as a designer also can not be entered anywhere. The fact that Sukhoi was a genius, as it were, is not being discussed. As well as the fact that many of his projects were "hacked" precisely because they were ahead of the understanding of those times.

However, back in our time.

In 2002, the question arose of replacing the outdated MiG-29 with the promising MiG-35. That was quite logical. But for some reason, representatives of the Sukhoi Design Bureau began to express the opinion that it was necessary to replace it with some kind of “more solid” machine. The idea is original, but for some reason the Ministry of Defense agreed with it. As a result, the replacement of light MiGs by heavy Su began.

As a result, by now in our fighter aviation a very strange situation arose, somewhat contrary to the classical principles of the construction of military aircraft.

There is a global concept, according to which, the proportion of light fighters in front-line aviation should be about two-thirds of the total number of aircraft. It is logical, at least based on economic factors. Combat use - a separate article.

Of course, the entry of heavy fighters into the troops will in no way reduce our combat readiness. But here again the nuances. And they must be distinguished, as well as the advantages and disadvantages of aircraft.

Remember history with deck MiG-29K? Copies broke a lot then. Flight tests for the decker ended in 2006 year. And they didn’t rush to accept this car for use by Admiral Kuznetsov. Although the Su-33, constituting its wing, has long been asked for a replacement. It came to insanity that such a hefty ship was carrying 8 airplanes on its hikes. It was? It was.

And the MiG-29K was adopted only in the 2013 year. By the way, at that time MiG-29KUB, combat training, double was already ready.

The Russian Navy generally weird policy in this regard. They are not in a hurry to change the Su-33, which are both older than the MiGs, and belong to the fourth generation, but also the Su-25UTG, which are generally the day before yesterday.

Look at the neighbor-partner? Why does India buy MiG-29K and MiG-29CUB for its aircraft carriers ("Vikramaditya", "Viraat" and the "Vikrant" under construction)? Hindus do not understand anything in aviation? Or just save money? Of course, do not save. First place in the world for the import of military equipment is saying something. As well as another contract for the 30 MiG-29K fighters.

But this is a halfback, which not many companies in the world produce. With ordinary planes worse. Recently, the MiG-35, which showed interest in India and Egypt, lost the tender. And to whom? French "Rafal". And the Egyptians and Indians chose to buy from not the most honest sellers is not the cheapest product. But the product, which exists "in fact", and does not hang out God knows how many years in the development stage.

Many experts believe that the MiG-35 is able to compete with the best aircraft, not only in its class, but also among heavier vehicles. However, to prove it now, when it exists in the form of an unfinished project, it is extremely difficult.

MiG-35 was supposed to appear in the troops a year ago. The main reason is the lack of readiness of the Zhuk-A radar with an active phased antenna array. By the way, the radar with AFAR - this is one of the signs of the fifth generation of the aircraft. Zhuk-A from the Fazotron-NIIR concern seems to be expected in the near future, but ...

True, the export version is already ready for production - “Zhuk-AE”. But like everything that we have contains the letter "E" in the labeling, this "Beetle" is simpler and weaker. Instead of the target range for air targets in 35 km planned for the MiG-200, on the export version this indicator is reduced to 150 km. The remaining indicators seem to be the same. In particular, both radars are capable of mapping an area and provide a flight (possibly supersonic) with a rounding of this relief.

So the plane, which tests begin in August, will probably already be equipped with the Zhuk-AE radar. All the rest is already on it.

It is generally accepted (quite rightly, by the way) that the Su-35 is the closest in quality to the fifth generation of fighters. Just because from the 4 ++ to the full 5 generation is one step. The RSK MiG believe that the MiG-35 is able to rise to the same level.

Although of course, this can only be proved by passing state tests. According to representatives of RSK MiG, the most advanced onboard electronic equipment is installed on 35. None of the "four" do not have such a powerful EW system. And pay special attention to excellent flight qualities.

When designing the aircraft, it was possible to increase the internal fuel supply with respect to the MiG-50 by 29%, and also to double the payload. Thus, in terms of armament and range, the aircraft was almost equal to the heavy fighters.

The new engine in the driveless mode does not reach the supersonic speed a bit, which is what the Su-35 does. However, unlike its heavier fellow has an electronic control system. Also, the designers managed to record engine reliability. In many ways, thanks to this, the aircraft's resource exceeds the 6 000 hours.

The weapons control system also uses two optical-location stations with television and thermal imaging channels, a laser range finder and a target designator. Su-35 has only one such station operating in the forward hemisphere. The MiG-35 has the ability to view in the lower hemisphere, which increases the effectiveness of the destruction of ground objects by a fighter.

Yes, and the radar of the Su-35 with a passive grille.

In general, if you still go through the performance characteristics, then the MiG-35 seems to be a very decent fighting vehicle. But, I repeat, in order to confirm them, one must pass the tests. And in the future to overcome all the barriers that prevented 35-th fly all these years.

Worse for our VKS just will not.

Ctrl Enter
Noticed oshЫbku Highlight text and press. Ctrl + Enter
We are
The RAC "MiG" are working on the concept of the fifth generation fighterAn-12 in Afghanistan
Military Reviewin Yandex News
Military Reviewin Google News
207 comments
Information
Dear reader, to leave comments on the publication, you must sign in.