Why did China bring its fighters to Aviadarts-2016? 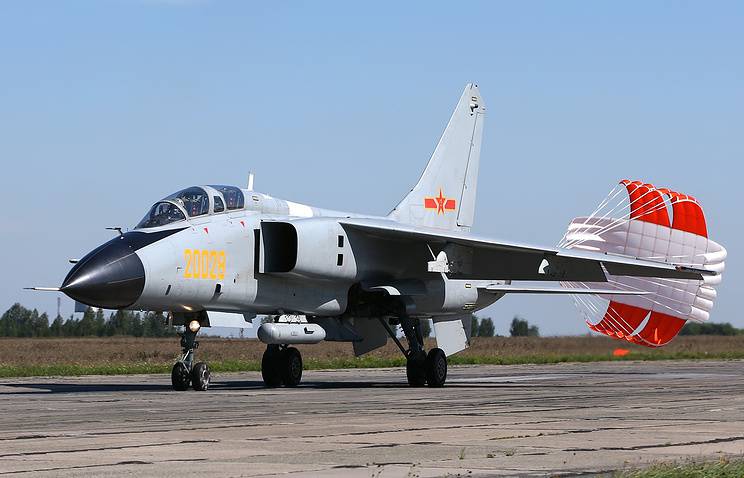 MOSCOW, 26 July. / Tass /. Crews of JH-7А bomber from China arrived at the Dyagilevo airfield in Ryazan to participate in the Aviadarts international flying skill competition held in the framework of ARMI-2016. This was reported on Tuesday by the Russian Ministry of Defense.

On July 25, a photo of the flight of two Chinese Xian JH-7 Flying Leopard fighters with the Il-76MD military transport aircraft accompanying them appeared on the Internet. Representatives of foreign teams will carry out the flight program on their aviation technique.

As TASS military observer Viktor Litovkin said, the most obvious reason that China brings its equipment to ARMI-2016 is that “it has money for it.”

The other (non-obvious) is that he wants to test his equipment in the Russian environment, on Russian training grounds, which in their own way are more complicated and not similar to those used in the Chinese army.

"They want to prove that not only the skill and professionalism of the Chinese soldiers defeats rivals in equal competitions, but also better than their partners, their equipment. On the one hand, it improves its export potential, on the other - inspires confidence in the Chinese soldiers the most modern and well-equipped rival / opponent "
Viktor Litovkin
TASS military commentator

The Chinese fighter-bomber Xian JH-7 for the second time becomes a member of the international competition of pilots "Aviadarts".

The aircraft was created at the end of 1980's. to replace the Harbin H-5 front bomber (a copy of the first Soviet jet bomber Il-28) and Nanchang Q-5 (attack aircraft based on the second-generation Soviet fighter MiG-19).

A version under the designation FBC-1 Flying Leopard (in translation - "Flying Leopard") is offered for export.

At the competition in Russia will participate the upgraded version of the aircraft JH-7A. According to data from open sources, a new aviation airborne radar station JL-10A, a container with a navigation and targeting system, as well as a radio intelligence container of Russian production AKP-8 are installed on it. The nomenclature of weapons has expanded due to the installation of new avionics.

According to the TASS military expert, the JH-7 fighter-bomber can be compared to the Russian tactical front-line bomber Su-24 in recruiting their tasks and armament. “Drying” has eight suspension points for rockets and bombs, and “Chinese” has 11 and takes on more ammunition than Su-24 (8 tons against 7 tons). For the rest, Litovkin believes, they are almost alike.

“Both that and the other have small arms and guns, unguided rockets and bombs and guided air-to-surface, air-to-air. The Chinese’s maximum speed is more - 1800 km / h against 1600. These and other not so significant advantages can be explained by the fact that one aircraft (Su-24) was created in the 70-s of the last century, the other - at the end of 80-s "
Viktor Litovkin
TASS military commentator

Russian Su-24 aircraft are currently being upgraded, but not intensively. According to the plans of the Russian Ministry of Defense, by the 2020, they will be replaced by the new Su-34 multifunctional fighter-bombers, which have proven themselves well during the military operation of the Aerospace Forces of the Russian Federation against the "Islamic State" (IG, organization banned in the Russian Federation) in Syria . It is this aircraft that already surpasses both the Su-24 and the Chinese JH-7 fighter in all respects.