What can bring the observance of tradition?

July 27 2016
77
Looking through the Ukrainian media, statements by politicians and deputies, more and more often I find myself thinking that all this has already happened. Somewhere, once, but it was. Deja vu. 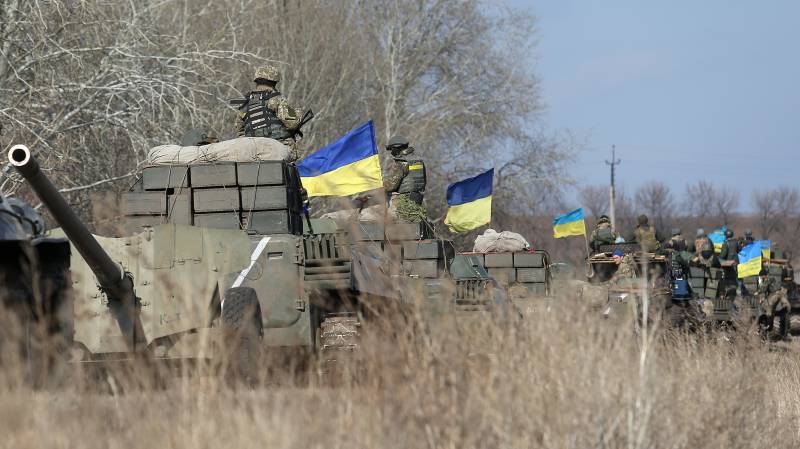 Ukraine in the last year has been overgrown with many “traditions”. Remember the traditional daily grenade. Or the same traditional "shelling by the separatists and the Russian army." And about the constant growth of the economy, which in a day or two turns into a recession? And examples of such a great many.

More and more often, Ukrainian deputies and politicians are talking about the new Maidan as a method of resolving the situation. And the conversation is no longer on the sidelines of the Rada or on its own pages on the Internet. The conversation is already open in the media. And everyone understands that such rumors did not appear without the knowledge of the authorities.

Ukraine is not a country where a person, even if he is the most famous and seemingly independent, can oppose the Poroshenko clique with impunity. Proved by Elderberry and many others. But the fact that such conversations are going is an indicator. As the second call in the theater.

Similarly, the situation with the economy. It cracks in such a way that this crackling sound is heard not only in Ukraine itself, but also in Europe, and even reaches the United States. Any requests for help from Kiev come across a bunch of conditions. Do you want money? We will, but ...

And this is the most "but" impossible to perform. Just because the fulfillment of such conditions is contrary to the very essence of the Kiev authorities. An attempt to go in the old, tried and tested way also failed. Industry, which the Ukrainians were so proud of, turned out to be nothing more than a fiction. Pshik, which existed only in tandem with the Russian industry. It is impossible to sell it. The same Odessa port plant, a monopolist in its segment, did not cause not only the rush of buyers, but even at least some interest. Zero applications for purchase!

And how many copies and noses were broken when discussing the issue of sale? And where there is money, and could buy, sit no fools. Moreover, they carefully watch the movements near Novorossiysk. And these movements can easily translate the Odessa PPZ in the same warehouse of scrap metal, such as, for example, "Yuzhmash". And there, in the reserve of investors, they understand that after the jokes with the energy bridge for the Crimea, everything can happen not in the way that they predict, but in any way they want and can in Russia.

Russia, after being declared an "aggressor," was forced to abandon many Ukrainian goods. And not so much by their own will, as by the decision of the government Square. And the Ukrainian industry is "stuck." There is a factory, there are workers, there is production experience. And there is no market.

In the military area for Kiev also nothing to boast. The loud statements about the "unconditional fulfillment of the Minsk Agreements by Ukraine" have already bored not only Europe, but also overseas politicians. No matter how hard the OSCE observers try to “ignore” the shelling of Donbass, it becomes more and more difficult. The western man in the street more and more often looks and listens to the other side. And in the media there are pictures of a completely different nature than Kiev would like.

The numerous victories of the Ukrainian warriors turn out to be punitive operations. Messages like “the separatists attacked, but were thrown back on 4-8 kilometers by our heroes” cause laughter. "Upcoming" in fact, it turns out, were sitting in their positions. And the stupidly organized attacks of the APU and the punishers, except for the next 200-x and 300-x, yielded nothing.

We wrote, and we thought that Kiev would take the Yugoslav way. It was logical and quite doable. Create a strong army and "crush" the Republicans with one powerful blow.

At first, many steps of the Ukrainian government talked about this. And then Poroshenko personally voiced this thought. But, "fulfillment of desires" in this matter was made purely "in Ukrainian." NATO will give us, the Americans will give, the whole world is with us. Dali. Let a little, but gave. Even modern weapons. So what? In the very first battles this weapon was lost. And then - get the trash, which is expensive to recycle. And you, and so will burn in any "boiler".

So we can say that we were not mistaken in our forecasts. They simply counted on a normal performance, not on a Ukrainian one. The result ... although you know, it's even better.

Their own, quite successful, weapons production was ruined in the bud. High-tech missiles, ships, planes, tanks no longer even speak. One "Azovtsa" is enough. But already fully mastered mortars and guns became an unbearable task. There is no steel, which means there are no trunks.

New Ukrainian mortars cause horror in calculations. No one knows the result of the next shot. Whether the mine "leaves" the target, or the target will be the calculation itself. Already several cases of mortar explosions in positions were.

Ok, production. Ukraine has “forgotten” how to even repair its own equipment. Those dumps that remained from Soviet times, have already been verified-rechecked. From the abandoned Soviet tanks of the time of Brezhnev, everything else could be used for repair.

But there is also the human factor. The fact that many instances of technology almost immediately after repair or overhaul again go into the category of "trash" or "pile of metal", this is the merit of the people. This is not about "hands from one place" it is about another. Commendable. The fact that overnight the hands of people, 10-15-20 years working with tanks, guns and mortars suddenly completely forgotten how to do it - definitely, the merit of the heads.

About Aviation and the navy did not write only lazy. Remember the parade in one of the Baltic countries, which became the subject of laughter for the whole world? Today, the Navy is exactly the same boat and boat. And coastal. Even if someone “presents” an old boat to the Ukrainian admirals, it is doubtful that Ukraine will be able to contain it.

Now back to talking about the new Maidan. Why, after all, are they actively disseminated by the Ukrainian media? After all, anyone who knows the situation even a little bit understands that the “chocolate” president is far from being “bloody”. And any performance quietly "put out the blood."

But the thing, as it seems to us, is that overseas owners decided to change the vector of European politics. Razdray in the EU and NATO is organized by them. The confrontation of Europe and Russia, too. The economy of the main competitors is undermined. In short, the mechanism is running. This means that the "Moor has done his job" and ... can calmly observe the development of events from the outside.

The terrorist attacks in European cities, the failed putsch in Turkey, the "cooling" by the "beloved wives" of the USA to Ukraine (Poland, the Baltic countries) are confirmed by this.

The Armed Forces of Ukraine today is not the force that can protect the power. The real force is punitive battalions. And they have repeatedly proved it. Not at the front, in the rear. Is there at least one case in the newest stories Ukraine, when the punisher was really punished? When did a court or tribunal pass a real conviction for war crimes to a punisher?

In any city of Ukraine, people with the chevrons of the punitive battalions quietly do whatever they want. With the connivance, and sometimes with the help, the local police. And to whom do the punishers submit?

It seems to me that today the active phase of the confrontation of the clans begins.

Pro-American in the person of the former Prime Minister Yatsenyuk (many did not understand why he is today next to the owners), Turchinov, Avakov and the Konstantinovsky brothers. And their competitors of the “local policy” in the person of Poroshenko and his “friends”, Saakashvili and other “Varyags”.

But there is a third group, which are in varying degrees of disagreement with Poroshenko, but have a real weight. Kolomoisky, Firtash, Akhmetov and other oligarchs. And the fourth in the person of Yulia Tymoshenko, who quietly sat for two years, but today is rapidly gaining political weight, thanks to her fellow member Savchenko.

In Ukraine, a real coup dawns. And the Maidan has absolutely nothing to do with it. Fighting will be "lords". "Holopam" is necessary to prepare "chuby". Even the scheme is already peeping.

In the near future, hostilities will be activated on the front. "In response to the separatist offensive ..." will often be heard in the Ukrainian media. The APU will launch active attacks on Donetsk. 200-e will become again commonplace in the Ukrainian cities and villages. The head of the NSDC Turchinov will require the president to declare martial law in the country.

Poroshenko will do it. Understanding that this way gives power to Turchinov, but he will. He simply has nowhere to retreat. Behind the wall. And no one who really wants to help. Neither the USA, nor NATO, nor Russia.

The combat-ready units of the Armed Forces of Ukraine will "get stuck" in battles with Republicans and will not be able to influence the situation inside the country. But the territorial battalions subordinate to Avakov can. They, together with the police (also under the control of Avakov), will take control of all the cities of Ukraine.

And then just everything. The president either runs or refuses "voluntarily" from power. And that means, in the conditions of martial law, transfers the power of the National Security Council. And ... get it and sign it. The Bloody Pastor is back.

Agree, the script is rather gloomy. But for now this is only a script. But it is not written from scratch. Many factors speak of its implementation.

UkroSMI has already been launched "duck" on the impending military coup by the Armed Forces of Ukraine. Stupid enough for people who understand, but quite "edible" for most Ukrainians. Turchinov repeatedly declares the need for martial law. According to some sources, the beginning of August is the offensive of the Armed Forces of Ukraine Odiozny, but the commander of Azov, with real power, Beletsky does not hide his desire to "bring order to the country."

By the way, the murder of Sheremet fits perfectly into the scheme. Dump the next "hand of the Kremlin" is impossible. Too famous personality. Too professional journalist. Too "a supporter of the new Ukraine." But to show the journalists who is the boss in the country, and who needs to serve - completely. Who does not want to repeat the fate of Sheremet, will have to side with the new government. Information background must be provided.

And, of course, without Russia in this situation will not do. In ukroSMI unfolding campaign to "reveal the next plan of Putin." It is Putin who is allegedly preparing a new coup.

And what do we get in the end? And in the end it turns out a purely fascist state. Just other options for the preservation of Ukraine is left. Either decay or fascism and dictatorship. They fumbled, however ...