Carnival in Rio according to the recipes of American laboratories: invisible doping and Zika virus 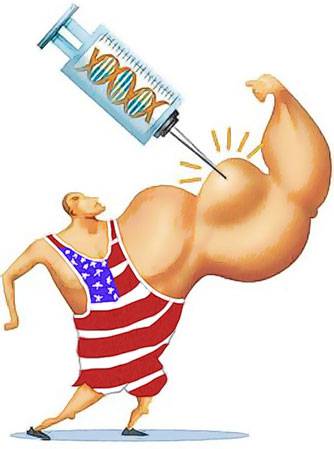 From 5 to 21 in August 2016, the XXXI Summer Olympics will be held in Rio de Janeiro, promising to be the most dishonest and politically biased in all history sporting event. The World Anti-Doping Agency, whose real task is really not to combat doping in general, but to search for more advanced methods of using drugs prohibited in sports for a politically more “correct" distribution of medals, after many years of work has prepared a real doping bomb. In close cooperation with coaches and national Olympic committees of the United States, Canada and the United Kingdom, a reliable methodology has been developed that qualitatively improves athletes' performance, does not formally contradict existing rules and regulations, including the list of prohibited WADA preparations, but has a much greater effect than regular doping.


We are talking about using the method of gene therapy, based on the introduction of genetic material into cells through the use of a specific nucleic acid molecule. And if more recently, in scientific literature it was written about testing similar technologies for animals, whose physical indicators have improved significantly, now testing has been conducted on people, many of whom are athletes and do not even suspect that they have become part of the experiment. Introduced insulin-like growth factor I (IGF-1) gene increases the athletes muscle mass by 30% faster, by all indications the remaining “young” for quite a long time, which can withstand heavy loads and emit significantly less lactic acid. But the most important thing is that the introduced gene produces a protein that is indistinguishable in the study of conventional tests from that which is naturally produced in the body of athletes as a result of intensive training. Identification is possible only with a biopsy (removal of tissue samples directly from the site of introduction of genetic material), which no one ever does during the competition.

Meanwhile, during the development of the drug, almost no attention was paid to the study of the consequences of its use due to the desire to start using it before the Olympics in Rio de Janeiro. There is quite a bit of time left for her, and with an unbiased look at the near-sports life, a rather strange sequence of events catches the eye. A few months before the Olympics, the US National Olympic Committee unexpectedly states that athletes are not required to go to competitions in Brazil if they are afraid of being infected with the Zika virus. And athletes, for whom the Olympic Games should, by definition, be the peak of their careers, begin one after another to refuse to participate. Basketball superstar Lebron James is going to use summer for rest and recovery, as well as NBA's most valuable player for the past two seasons, Steph Curry. At the Olympics in Brazil, allegedly due to the Zika virus, Australian golfers leader Australian Jason Day will not take part, as well as Fijian golfer Vijay Singh, a former world champion, and Rory McIlroy, one of the world's strongest golfers, will not participate. The best Ukrainian tennis player Alexander Dolgopolov for the same reasons is not going to go to Brazil. And this is not all sportsmen who have been preparing for the Games for many years, but who have not decided to go to them. In addition, it is very strange that the Brazilian anti-doping lab is closed for an indefinite period.

One gets the impression that they are trying to hide something from the public. Apparently, the body of not all athletes positively transferred gene therapy. And it is not strange, because the introduction of alien genes into the body is fraught with serious and unpredictable side reactions that can cause diseases, including deadly ones, by negating the entire training process. Therefore, gene doping and is considered much more dangerous than any anabolic steroids.

At the same time, the European and American sports press is busy savoring the problems of Chinese swimmers, Russian athletes and everything else, not paying attention to the fact that for the notorious medal standings, to wipe the nose of China and Russia at the Olympics, the health of athletes whose body simply fails due to drugs that exert effects at the gene level. And do not be surprised. Sport and politics have always kept pace. And there are plenty of examples of the fact that folk idols actually achieved their success in a very dubious way. The most prominent examples are cyclist Lance Armstrong, who took synthetic testosterone, athlete Tyson is a gay man who has fallen on anabolic steroids. American wrestler Kurt Angle and four-time Olympic champion in swimming Dara Torres used to fall asleep on using the most powerful growth hormone.

If such facts are hushed up, then in the very near future we are waiting for the Olympiad of biogenetically modernized athletes who will show the world the level of development of science in the United States.

Ctrl Enter
Noticed oshЫbku Highlight text and press. Ctrl + Enter
We are
How WADA and IOC amicably reduce themselves to the level of the plinthTheir fate will be decided by others.
Military Reviewin Yandex News
Military Reviewin Google News
61 comment
Information
Dear reader, to leave comments on the publication, you must sign in.