July 27 2016
69
A series of statements by the Polish Minister of Defense alone, Anthony (Anthony) Macherevich, gives rise to talk about the clear need for protection historical the truth and how important such protection is in the face of tremendous pressure from both inside and outside on Russian politics to defend their interests. To begin with, it is worth recalling that the Polish Minister of Defense has recently become, so to speak, a pseudo-historical newsmaker who re-writes history worse than Rezun-Suvorov. Of the last pearls of Macherevich, one can single out his statement that the Soviet special services at one time provoked the massacre of the OUN-UPA by the Nazis in Volyn, as well as a statement about the Warsaw Uprising as the largest battle of the Second World War, which in addition allowed to prevent the Red Army from moving west .

One could not pay any attention to these ministerial ravings. However, it is not too often that we are accustomed to ignore such heresy, which has nothing to do with real historical facts. After all, if we miss one, two, three, then then those before whom the goal is set up to spoil, even in a historical retrospective, there is a chance to refer to each other. As a result, statements such as those that make all sorts of "macheseviches" may very well be in documents that pretend to historical essays and references. Years through 10 in the same Poland, they will safely forget that Pan Macieczewicz was at the helm of the Defense Ministry, but his words about the Warsaw Uprising could well become the basis for regular interpretations of the history of the Second World War and, as a result, her soviet people.

What really bothers you? It’s not even the fact that speaking heads in the governments of the countries of the former socialist camp more and more often have a desire to spew out a lie more like a blatant provocation. In the end, it is a foreign state that live with it. It is disturbing that we ourselves - at home - cannot in any way decide on a certain kind of measure, conclude a theory of social contract, perhaps to at least try to offer our children a single history textbook.

It is quite clear that the very idea of ​​a single line of history textbooks (as well as a single line of textbooks on other disciplines) strikes at a business system that in recent years has perfectly learned how to make money on numerous reprints of school and university literature. Moreover, these reprints from each other are often distinguished by diametrically opposite interpretations of the same event. If with the exact sciences such an opposite interpretation is impossible by definition (although there are creative “managers” there as well), then with the same story is actually complete freedom for any authors. For some time now, the freemen, it seems, have been hit in the form of a more detailed definition of the historical concept at the state level, but this does not prevent individual representatives of the business community employed in the system to push such “scientific” instances into the education system that place really in the trash - no more. Not Rezun and Zubov, so the new delicacy is edited by the HSE, which we, it turns out, is often behind the concept of textbooks ... 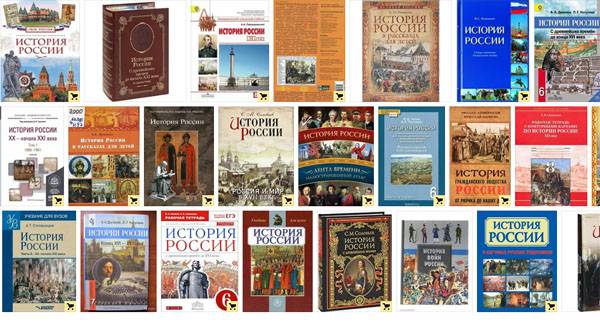 It is clear that a normal teacher himself will select for his children suitable educational literature, which would more or less clearly tell about the historical upheavals in the life of our country and not only. But where is the guarantee that a) there are not quite normal ones and, excuse me, not at all normal, b) for the sake of "enhanced preparation for the exam," the students themselves will not plunge into a pile of textbooks with mutually exclusive interpretations that can wreak havoc in the young head?

The question is not so much the creation of a single textbook, which the Ministry of Education and Science still refuses, waving its hands, but in a single concept of material presentation. And - the concept of unambiguous - without the fact that would pour water on the mill "macherevich" and the like. A question and in experts. After all, today teachers come to schools who received their pedagogical education in 90, when “everything was mixed up in the Oblonskys' house”. And it is not the teachers' fault that the very process of their preparation was going on in times of dashing changes. Are there many teachers in our country who, what are called, respond to destructive challenges, and also taking into account the fact that the Ministry of Education and Science does not always respond to the challenges, to put it mildly.

By the way, not so long ago I had to face the “documentary” film of the British “experts”, broadcast in the Russian Federation, in which the “information” had been heard. The host, traveling in Russia, quite seriously asserts that he is now visiting a church in Moscow, built by Ivan the Terrible, who executed about 10 millions of people! 10 MILLION PEOPLE ... And this was in the time of John IV, when the population of all Russia hardly reached that value. But this program was looked at both in the West and in Russia, and everyone who, in principle, did not think about this nonsense, took seriously how bloodthirsty this Ivan the Terrible was. But have you heard something similar about the bloodthirstiness of Maria de Medici? Despite the fact that this lady provoked a large-scale massacre, in which, according to the most conservative estimates of historians, only overnight (St. Bartholomew) killed more than thirty thousand French Huguenots, Western history tractors do not speak about the bloody disposition of this historical persona. It is understandable: is it possible to compare "10 millions" (still few people check ...) in Russia and "some 30 thousands" in France ... And after all, all this is reflected in textbooks and hanging noodles on modern ears schoolchildren.

As a result, pearls appear about the release by the “Ukrainians” of Auschwitz prisoners, that Stalin had to abandon the confrontation near Leningrad in order to “save lives”, that the USSR was supposedly going to attack Germany in 1941, o “Soviet occupiers” in Ukraine, in the Baltic States and everywhere else — and without reports that factories, universities, schools, hospitals, theaters remained after these “occupants” and that the “occupied” economically often lived better than the “occupiers”.

All this pseudo-historical heresy must be burned at the root. And the best tool for this is a unified approach to reporting on historical events in state educational institutions. No one is going to forbid schoolchildren to independently get acquainted with other “interpretations”, please ... but only outside the framework of the program. At least about 10 million "killed by Ivan the Terrible", at least about the "Cossack underwater navy and digging of the Black Sea with protoucra. ” At least to assess the inadequacy of the authors of these statements ...

The state and the people have repeatedly come across the fact that it usually pours porridge brewed on historical distortions and outright lies.