July 26 2016
19
Fans of small weapons Smooth-bore semi-automatic hunting rifles of the Turkish company Girsan, which are sold in Russia under the brand name Yenisei, are quite well known from Russia. In this case, the company Girsan specializes in the production of short-barreled weapons. The latest development in this segment was the first self-loading pistol of the company with a polymer frame Girsan MC28 SACS.


Perhaps there is not a single manufacturer of short-barreled firearms in the world who would not secretly dream of creating their own "Glock killer" - the same accurate and reliable self-loading pistol with a plastic frame, but with an even better value for money. Over the past 10 years, along with well-known manufacturers of short-barreled weapons, which include Heckler & Koch, Carl Walther, SIG-Sauer, Beretta and CZ, representatives of the so-called "weapon periphery" from the states of Eastern Europe regularly make attempts to take away part of the market from the Austrian pistol , Southeast Asia and the Middle East. In particular, the Turks are very active in this direction, who in the last decade regularly surprise the world community with both very solid and worthy clones of well-known models of Western manufacturers, and models of weapons of their own design.

Turkish weapons company Girsan Gun Industry was founded in 1994 year and began its journey with the release of clones of Beretta pistols called Yavuz 16 Compact (copy of Beretta 92F Compact) and Yavuz 16 Regard (Beretta 92G), which were presented on the market for short-barreled firearms in 1995 year. Today Girsan is a fairly large manufacturer of short-barreled weapons: in the company's product line, there are more than 30 models of self-loading pistols and 3 models of semi-automatic rifles. Every year, the enterprise produces approximately 60 thousand copies of small arms. 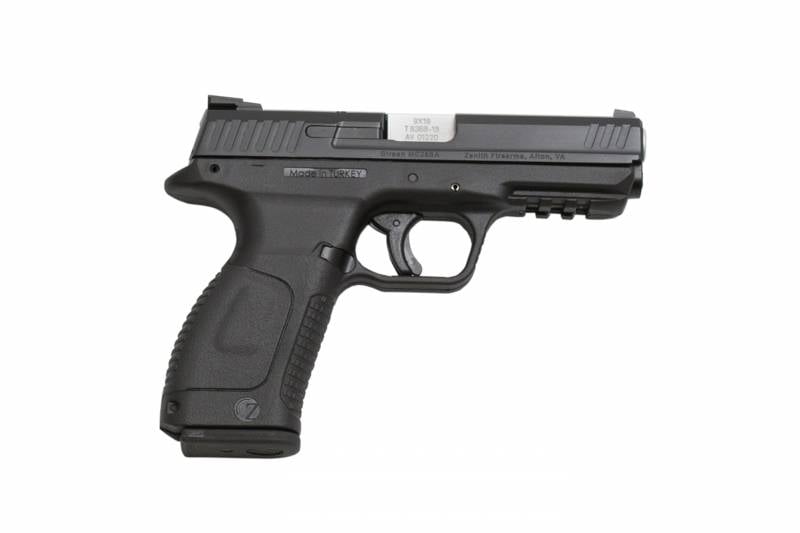 At the same time, for Girsan, the release of hunting rifles is rather a diversification of production. The main products of the company are pistols for the Turkish army and police, as well as for practical shooting. The company has a very high reputation in Turkey in the segment of short-barreled firearms. At the same time, the distinctive features of the weapons produced by Girsan are: good workmanship, a rational design, a “standard” set of designs - plastic, camouflage, a nut, sets with two trunks, as well as a well-developed design of the produced samples. Today, the weapons of this company are manufactured using the most modern technologies and are actively used by security forces of the Republic of Turkey.

In 2015, at the IWA Outdoor Classic arms exhibition, which takes place in Nuremberg, the Turkish company Grisan presented its new model line of pistols with a striker type trigger mechanism. In layout and design, the weapon was similar to the American Smith & Wesson M&P pistol. Two pistols were presented - MC28-SA and MC28-SAC (shortened). Distinctive features of the latter are smaller dimensions and weight. At the same time, the GIRSAN MC28 became the first pistol of a Turkish company with a frame made of polymer materials. The weapon can be considered a completely independent development of the company (the previous models of pistols were copies and interpretations of the Beretta 92, Colt 1911 and other popular models, or were seriously revised compilations of them).

And although outwardly the Girsan MC28 quite strongly resembles the American pistol Smith & Wesson "Military & Police" (M&P), which is relatively underestimated by the gun public, this similarity is only superficial. It is limited only by the general principle of operation of automation and locking (modified Browning scheme) and design, but the controls and the trigger are significantly different.

The trigger mechanism (trigger) of this pistol is structurally more similar to that of the Glock pistol and differs from the trigger of the American M&P in the presence of a cocking indicator for the drummer, which is located on the back of the bolt casing with a clearly visible and bright red dot. As is done in many of the finest modern handguns, the rear of the MC28 pistol grip has been interchangeable, allowing the shooter to adjust the size for the best recoil and grip. The consumer receives a Girsan MC28 pistol with three different grip covers: large, medium and small for maximum ease of use. Replacing them is very simple: you just need to knock out the pin using the punch supplied with the weapon. 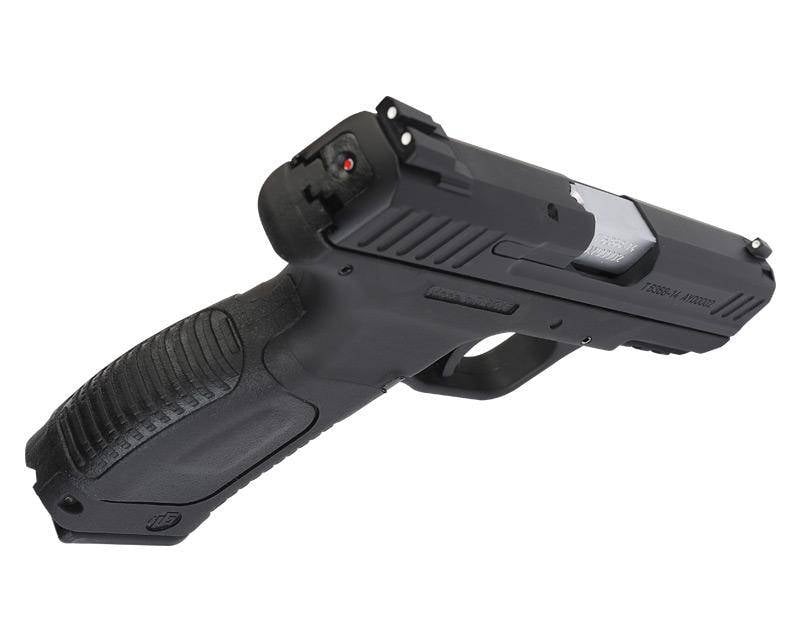 All controls of the MC28 pistol are traditional for the vast majority of modern pistols, so the Turkish model of short-barreled weapons is familiar to many shooters and is easy enough to learn. The pistol in the standard version of the MC 28 SA does not have a manual safety catch, the role of which is played by the lever located on the trigger. There are only 2 levers on the pistol frame: a disassembly lever and a slide stop. Disassembling a Turkish pistol is quite simple, it resembles disassembling a Glock pistol, however, it requires caution from the shooter, so during disassembly you need to pull the trigger, which means you need to be especially careful and control whether the pistol is loaded. According to the reviews of the first buyers of the Turkish pistol, it reliably works with different types of ammunition (including semi-sheathed (expansive) bullets), and in accuracy it is not inferior to the Smith & Wesson MP9 and Glock 17 models. At the same time, the pistol has a good security system. It includes a hammer lock, a striker cocking indicator, an indicator that the cartridge is in the bore, a double trigger and an external fuse, which is not available on all models.

The Girsan MC 28 Turkish pistol comes with a plastic case, 3 interchangeable (described above) backrests of the handle, 3 spare ammunition magazine, a set for cleaning weapons, equipment and a cable lock. For a budget model of short-barrels with a price of Turkish liras 1400 (approximately EUR 430), this package can be considered generous enough. Weapons are made in different color options (black, olive, sand, with silver casing, yellow, pink, camouflage, cell). According to the representatives of the Turkish company, different color patterns are in demand not only from representatives of law enforcement agencies who want to get weapons in accordance with the camouflage colors of their uniforms, but also from female buyers who buy similar weapons for home self-defense and hidden wear. 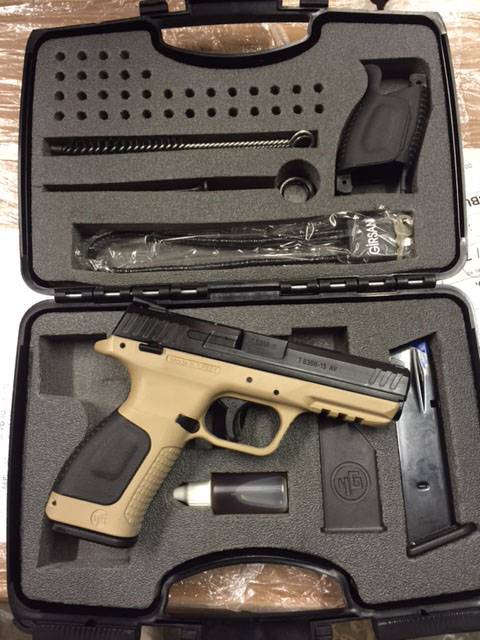 In addition to the standard model, the Turkish manufacturer offers the option of a handgun with a Girsan MC 28 SAS frame, as well as a compact version called the Girsan MC 28 SAC, this gun is shorter by approximately 10 mm. A novelty is the Girsan MC 28 SACS model, which not only combines the features of SAS / SAC variants, but also has a slightly modified design. The main difference of this model of the gun is the shape of the handle, which received a noticeable recess under the thumb arrow. This ensures a deeper fit of the weapon in the hand, which is a good solution both in terms of stability during fast shooting, and in terms of ergonomics (the pistol's handle subjectively becomes larger while maintaining essentially the same dimensions).

The performance characteristics of the Girsan MC 28 SASS Turkish pistol model are as follows: caliber 9x19 mm ammunition, overall dimensions 182,5x144,8x30 mm, gun weight without magazine - only 690 g, magazine capacity - 15 cartridges. The length of the cold-forged stem is 97 mm, it is reported that the trunk has 6 right rifling with a pitch 250 mm. The initial speed of the bullet is 363 m / s, and the effective range of the pistol is up to 70 m. According to the manufacturer, the declared life of the gun is 50 thousands of shots. 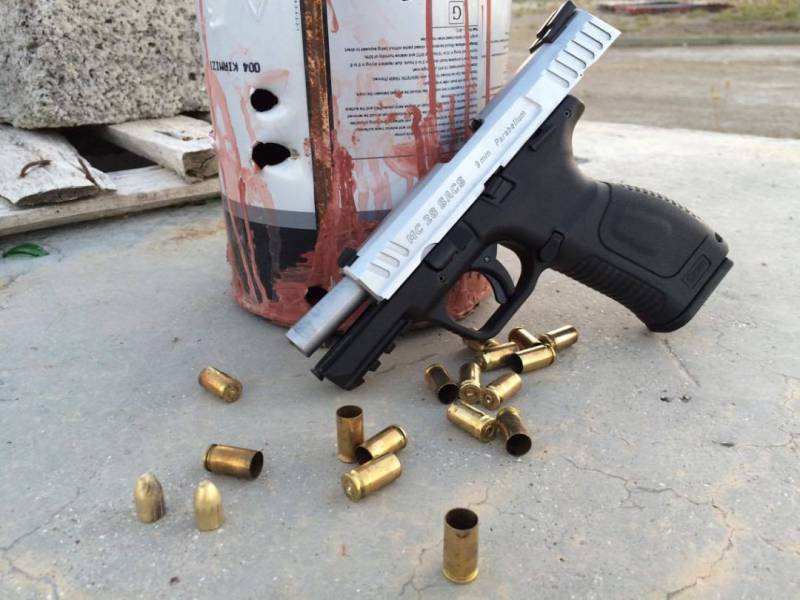 An interesting detail is that the Girsan MC 28 family of pistols is being produced today in cooperation with one of the Italian weapons companies, which was bought by a Turkish company in order to improve the quality of products, as well as to increase the competitiveness of pistols in the international market. For all Girsan MC 28 pistols, this is an obvious advantage, which makes them interesting for many buyers, especially if you take into account the fairly affordable price for a pistol.